I’ve spent a lot of my Pandemic time jamming standard games in Magic Arena while daydreaming about the day I can sit down at an actual tournament with my paper Modern and Legacy decks (or the day I finally bite the bullet and rebuild my decks on MTGO). Even though I’ve played a lot of it throughout my Magic career, Standard has never been my favorite format. With every new set that comes out, I find myself evaluating new cards on the basis of whether or not they’ll be good enough to make it in Modern or Legacy.

It feels like we normally only get a few cards with eternal potential with each new set, but I’ve been pleasantly surprised with Zendikar Rising! I’ve been pretty stoked on this set as a whole, but as I was looking through some Modern and Legacy MTGO results, I was even more stoked to realize there’s actually a bunch of cards from the set being tested in eternal formats! So this week I decided we should take a look at five of these eternal contenders, the decks they're being tested in, and the likelihood of them sticking around.

Sea Gate Stormcaller was one of the first Zendikar Rising cards I saw being talked about in regards to being played in eternal formats. It's a mythic blue two-drop that allows you to copy the next instant or sorcery spell with converted mana cost 2 or less that you cast that turn, and you can kick it to copy the spell twice. There was a good amount of hype for this card when it was spoiled, and I saw people talking about it slotting into all kinds of eternal format decks with blue in them - but after release, is it being played in anything? 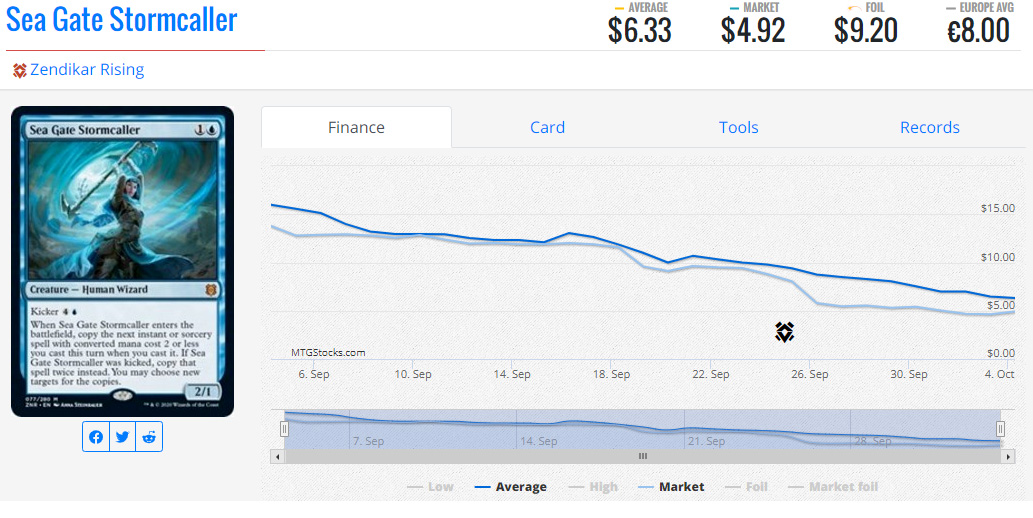 Well, yes, but not in as many lists as I was expecting to see when I did my searches. MTGO user joohyun piloted a super sweet WUR deck that took a 5-0 finish in a Modern League on MTGO on October 2nd that featured three copies of it alongside three copies of long-time favorite Snapcaster Mage. As far as Legacy is concerned, there doesn't seem to be as much action for the card as I assumed there would be. AnziD took a Snowko variant running four copies of the new human wizard to a 4-3 finish in a Legacy Champs event on MTGO on September 20th, and kingregal took an Uro Piles type deck featuring four copies of the Stormcaller to a 4-3 finish in a Legacy Challenge on MTGO on the same day.

So, what are the chances this new blue mythic continues to see play in eternal formats? Honestly, based on what I'm seeing right now I'm not sure. I think the card is super cool, and I believe it has a lot of potential to take off if the right list is found for it. There are still tons of copies out there for under $5, so I wouldn't mind picking these up and gambling that they find their place in a sweet eternal deck in the future.

Okay, I know I've already talked a lot about the new lands from Zendikar Rising (and that talking about two in one section technically makes this list six cards instead of five) but I think they're awesome cards that have the potential to slot into a lot of existing decks in eternal formats. 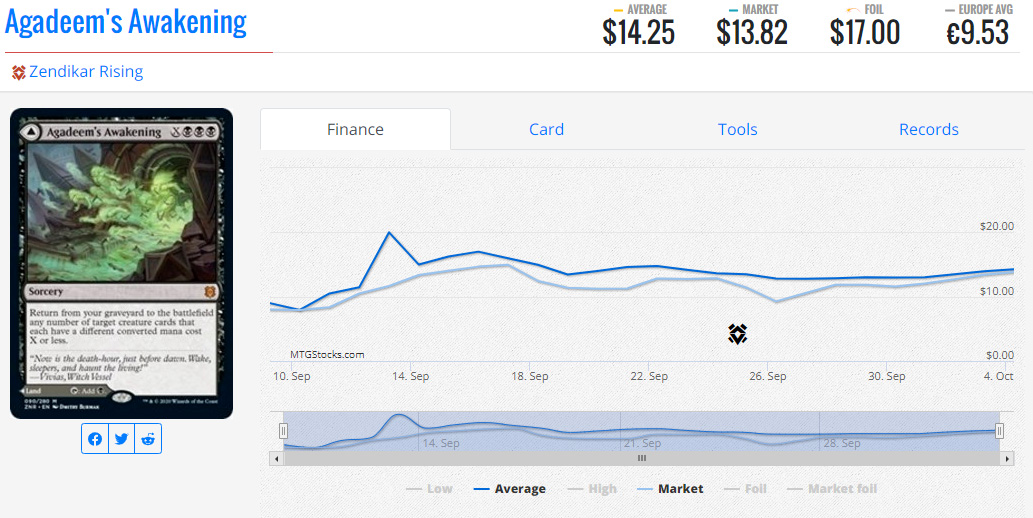 The most obvious choice for these lands seemed to be in a Charbelcher strategy, and we've been seeing playsets of both Agadeem's Awakening and Turntimber Symbiosis showing up in hilariously awesome no land Goblin Charbelcher lists in Legacy like the one vincentadu1tman took to a 5-0 finish in a Legacy League on MTGO on October 3rd. It turns out playing lands that don't count as lands to Charbelcher is pretty darn good in that strategy. 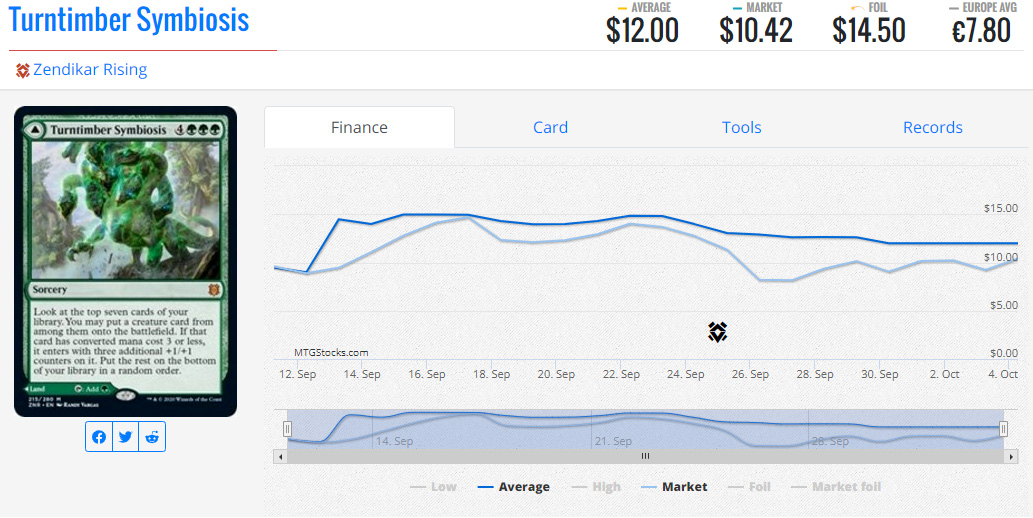 In Modern, there have been some sweet "Oops! All Spells" lists also running a playset of both of these cards, like the list that Gautcho took to a 5-0 finish in a Modern League on MTGO on October 2nd (which also featured two Shatterskull Smashing). Agadeem's Awakening also features as a singleton in Modern Rakdos Death's Shadow, which we'll talk about more later in the article. I think all of these modal lands have a ton of potential to be played in any format they're legal in and are definitely worth trading into and holding onto for a while.

I suppose it's unsurprising that the current boogeyman of Standard, Omnath, Locus of Creation, is already starting to pop up in eternal formats. Personally, I think this card is insanely good (and not fun to get beat by in Arena) and possibly even too powerful for Standard right now. 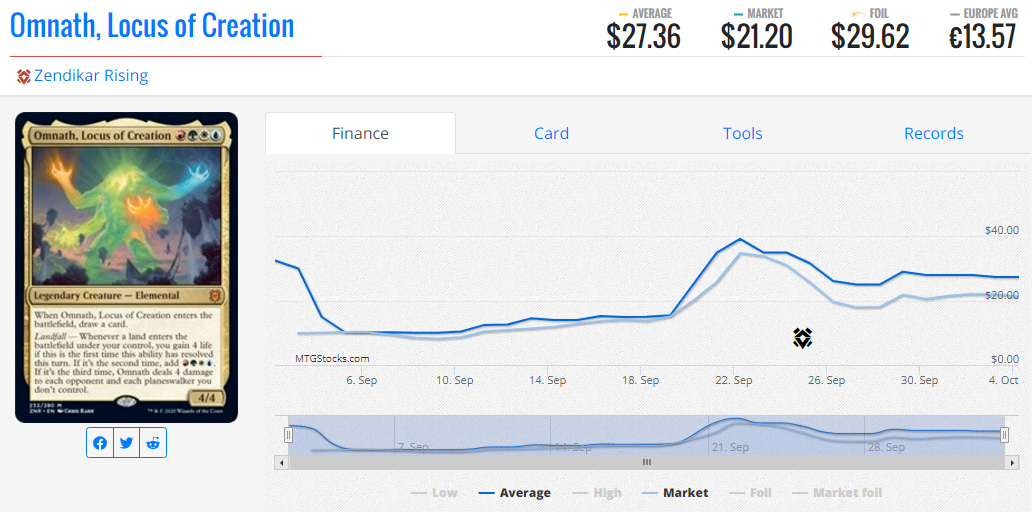 Omnath has also been deemed good enough to play in Legacy, with themightywizbit taking a Snowko list featuring two copies of Omnath to a 5-0 finish in a Legacy League on MTGO on September 26th! I'm not sold on the idea that people should be rushing out to pick up their copies of Omnath right this second, especially if there's still a chance it becomes deemed too oppressive for the current Standard environment, but if you can find a good deal or trade into some copies at a good price, I think it would be wise to hold onto them for a bit and see if this legendary elemental keeps seeing play.

Scourge of the Skyclaves was definitely a mythic from Zendikar Rising that I undervalued when it was first spoiled. People were hyped on it though, and after looking at recent tournament results I can see why! 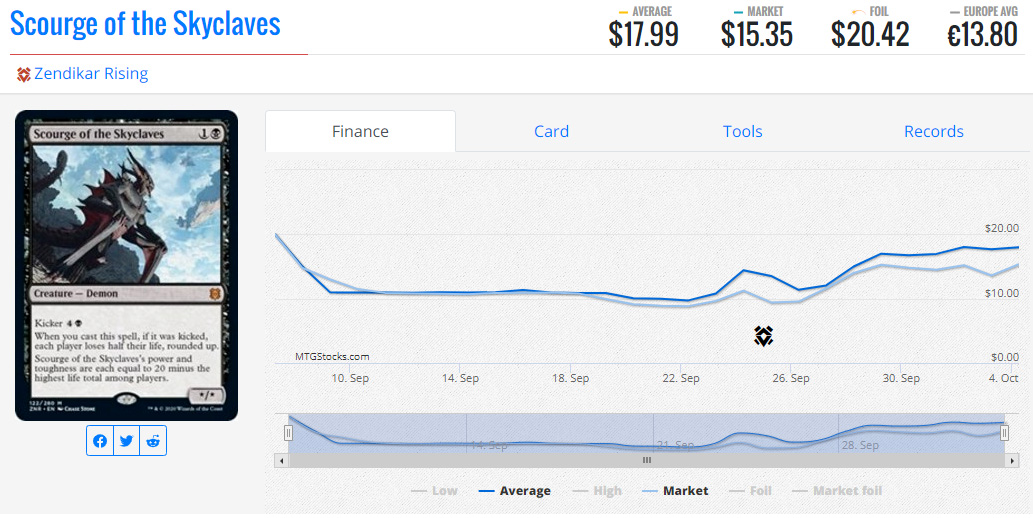 Interestingly enough, all three of those decks feature Lurrus of the Dream-Den as a companion - which I think is a card worth keeping an eye on now due to the popularity of these decks. 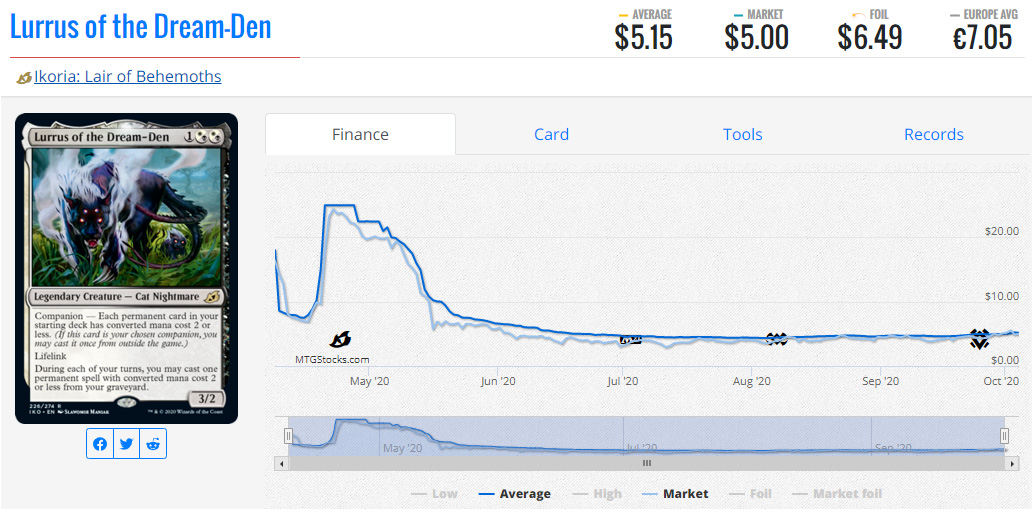 Scourge of the Skyclave even showed up as a singleton in the Legacy version of Death's Shadow, hanging out with format all-star Delver of Secrets in a Dimir Shadow list that MM_17 took to a 5-0 finish in a Legacy League on MTGO on September 26th! Scourge is proving to be one of the more expensive cards from Zendikar Rising at the moment, and I'm honestly not sure when the best time to buy in would be. Usually, we'd see a dip in price when it rotated out of Standard, but it's not seeing a ton of play in Standard at the moment so that might not hold true. It's a sweet card though, and if you can find a good deal on it I'd say pick it up, especially if you want to play them in the future!

Skyclave Apparation is another card from Zendikar Rising I definitely misjudged when it was spoiled. It may not have flying, and the downside of potentially leaving your opponent with an elemental is worth taking into consideration, but this Kor Spirit is already proving itself to be a powerful addition to several decks in eternal formats. 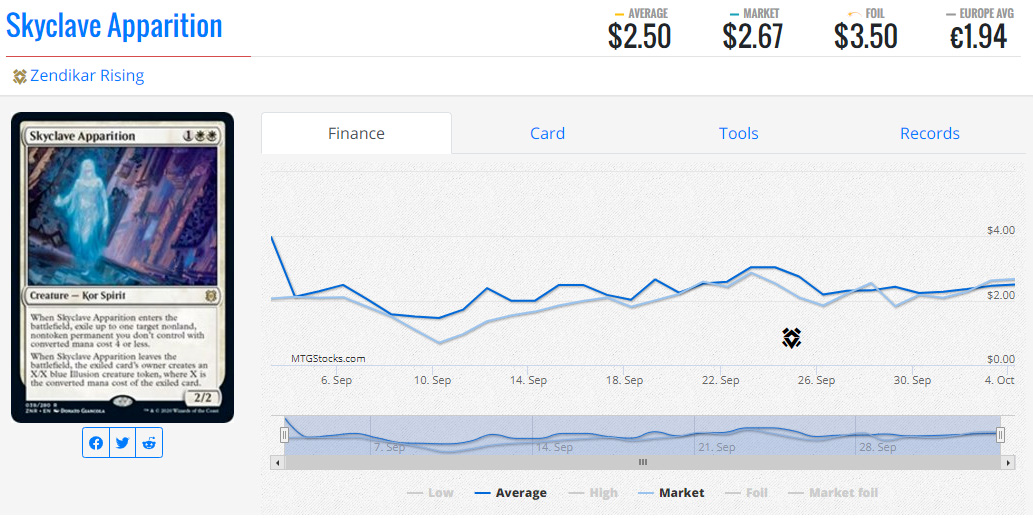 It appears to have been a powerful boost to Taxes strategies in Modern, showing up as a four-of in lists like the Eldrazi & Taxes list that AJRubenstein took to a 5-0 finish in a Modern League on MTGO on October 2nd. I love playing Taxes strategies, and this list has me super excited to sleeve up my Thalia, Guardian of Thrabens again when I get a chance to play paper Modern after the Pandemic!

This is a card I would definitely say is a smart pick-up right now. Regular printings are under $3 apiece right now, and you can get the extended arts for not much more. That's a great buy-in for a card that is seeing plenty of play already in Modern and Legacy, and if we ever see a Legacy Death and Taxes deck take down a big tournament again someday in the future, it would be awesome having extra copies of this card on hand to sell into the hype.

Well, friends, that's it from me today! What do you think about these eternal picks from Zendikar Rising? What cards did I not talk about today that you think will carve out a home for themselves in your favorite eternal format? Feel free to hit me up on the QS Discord any time, say hello on my Twitch stream every Wednesday, Friday, and Sunday, or hit me up on my YouTube channel! I hope you all are staying safe out there, take care and I'll see you next week!