Welcome to another week of budget-focused Magic! I know I've been a little quiet as of late, but I'll be posting more frequently in the future! Last we talked, we discussed some Zendikar Rising cards to keep an eye on, some of which have been on the rise since. Today we'll be going over some cards that have potential demand in Pioneer, and why I think they'll be relevant in the current metagame. What I'd like to start doing in these articles is spotlighting any cards previously discussed that have either gone up. or look like they will spike based on trends in Pioneer.

Here's a highlight of some previously discussed cards that are rising in price. The price shown (at time of writing) is how much it has risen since we last discussed them.

Hopefully, some of you picked up the gems listed above. Anyway, let's continue with some new Gruul picks! 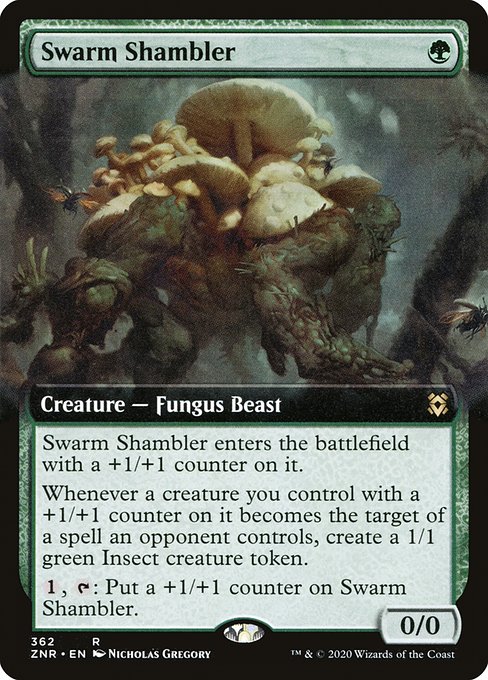 Swarm Shambler extended art foils are a great pickup, especially when the card looks to be at its price floor. It's currently sitting at $0.99 but has plenty of room to at least double or triple in price. The upside it holds going into mid and late-game situations is great. Swarming the board with a ton of insect tokens can easily take over a game if left unchecked.

Swarm Shambler enters with a 1/1 counter, and that makes it incredibly synergistic with cards like Hardened Scales; anything utilizing or buffing creatures with counters on them, or when they enter the battlefield, really. Secondly, we make tokens any time a creature we control with a 1/1 counter on it gets targeted. This ability adds extra depth, as this synergizes in token builds in addition to counter decks. Lastly, it has the ability to buff itself, which allows it to scale into the late game in the right situation. It doesn't quite fill the same role as a card like Hangarback Walker, but it's pretty close.

This might not seem too big of a deal, but this ability can easily be abused. Hardened Scales being on the board, even with one out gives it two 1/1 counters. We can also use this as a defensive tactic. As we know we can block, buff, and potentially rid of a threat pending board state. 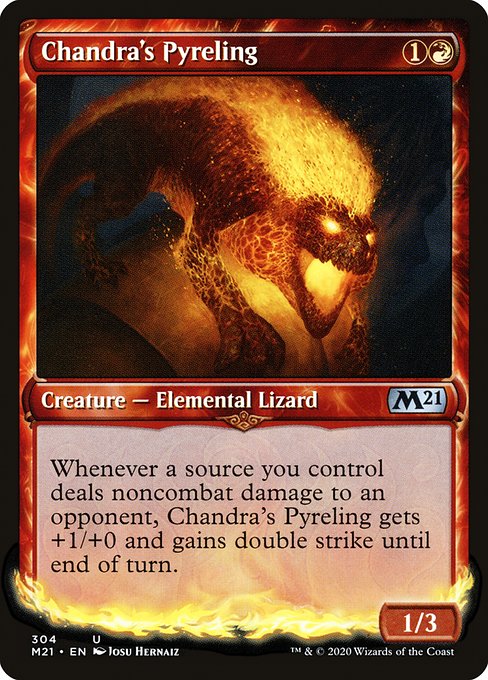 Next up is Chandra's Pyreling, specifically the alternate art foil. Currently at $0.38, this card has the potential to be around the $2.00 range (if not more) depending what flavor of Mono Red becomes successful. It seems at least looking at it can go in not only Mono Red, but Gruul builds too. This popped up on my radar a while ago, and earns my consideration immediately for three things:

Using a Cavalcade of Calamity build in addition to quick burn spells can buff this elemental quickly if you're looking to build-around, but your average top eight brew could utilize this card:

Another way we could utilize its ability late game would be to use a card like Unleash Fury and then use Fling to deal lethal damage. In perfect world, we can use Shock, Unleash Fury, swing for damage, and Fling, 14 damage (assuming no blocks). 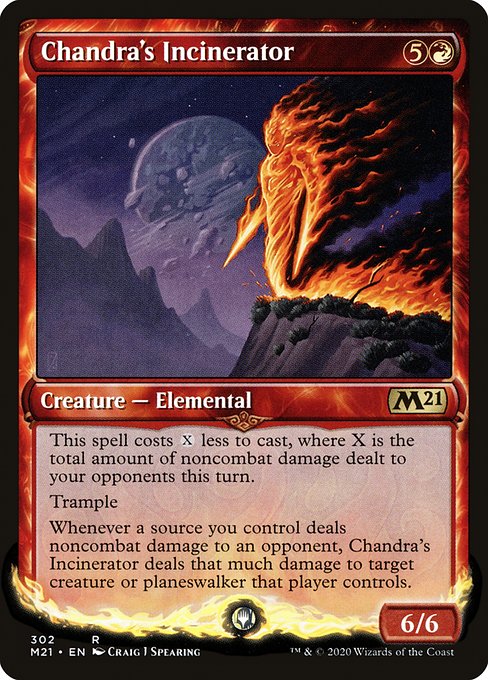 The last card we are going to discuss today is Chandra's Incinerator alternate art foils. Currently, the price for a normal copy is at $1.49 and has room to grow long-term. When it first dropped in Core Set 2021, it looked like an auto-include in any red build. It is geared towards late-game based on text alone but can come out sooner depending on the texture of the build.

If you're not too worried about having it come online early, then Mono Red can utilize this in the later stages of a game to give the deck reach. Although this is more likely going to be a one or two-of in the average red deck, the upside it holds should push brewers to figure out the best way to utilize this.

Another aspect to this card is the ability to deal damage to creatures. As a red deck, it's never ideal when you're forced to use a burn spell to take care of an opposing threat, but Chandra's Incinerator allows you to do both, ultimately allowing players to focus on burning their opponent out without wasting your precious instants and sorceries. This is not something people should overlook, as we are always looking for ways to get the most out of each play.

Pioneer is still a developing format and happens to have quite a few red and green cards that show a lot of potential upsides. Much like Modern, it contains a ton of cards that haven't yet found a home, whether it's a matter of a card not yet printed, or the right set of circumstances in the metagame at large. The cards mentioned today overall look solid and are worth keeping an eye on, in my opinion. As stated in previous articles, the key to Budget-Focused is being aware of these kinds of cards and getting in early! I hope you all enjoyed today’s article and I will see you next time.