Greetings students, and welcome to the first week of Strixhaven spoilers. As this is the first week, I'll be keeping things simple by going through the set's mechanics. I've made this a tradition for all new set spoilers, and it's particularly appropriate this time as the new mechanics are a both surprisingly straightforward and annoyingly indirect. So open your books, and let's begin. 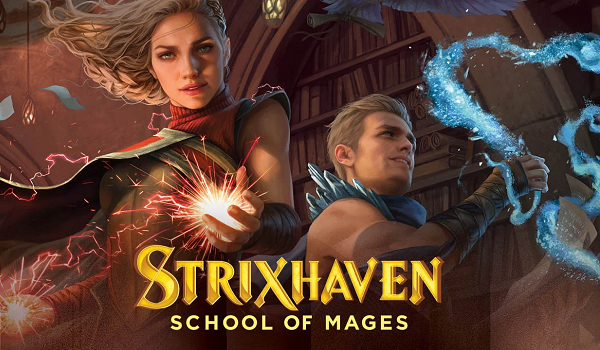 The first thing to note is that the set's full name is Strixhaven: School of Mages. Yes, that last clause is the conceit of my stylistic flourish this article. It is also critical to understand the ecosystem of these mechanics: it's all about non-creature spells. Of course, there will be quite a lot of creatures, and many of these mechanics will be stapled to creatures; Wizards's whole design philosophy is that creatures are central to the game. However, the driver will be the non-creature spells, instants and sorceries primarily. Artifacts and enchantments are getting some love too thanks to the red-white school Lorehold's themes. You should also know that it's an enemy-colored set. So Jund, Burn, and Prowess players will be paying especially close attention to Strixhaven. 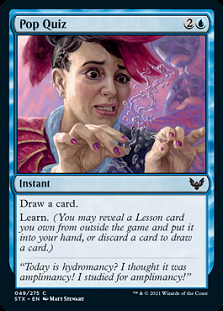 The signature mechanic is technically a split mechanic. Strixhaven introduces Lessons, which are instants and sorceries with the lesson subtype. This subtype doesn't mean anything on its own, impacting functionality only flavorfully. Rather, the marker is for usage with the learn keyword found on some spells. Learn seems to be used in place of "draw a card" in Strixhaven, as it's just on cards as an additional effect. Said cards are all flavored around the many parts of academic life (I'm feeling very seen by Pop Quiz), but that's the only connection. That said, learn has a lot of potential because it either lets you wish for a Lesson or just cycle (discard a card to draw a card).

I should specify that learn has potential, but that doesn't make it good. Cycling is a good mechanic, but mainly in the context of Living End. The only other cycling spells that see play are Unearth and Shark Typhoon. While there are interesting implications of Living End getting to cycle creatures without the mechanic, that seems a tad inefficient. Those decks are so streamlined as-is, so why complicate matters? 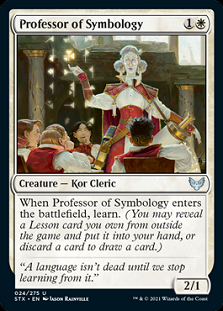 Outside of Living End, there is certainly utility in discarding dead cards without cycling to draw into new, relevant ones. However, the cards currently spoiled strongly suggest that utility won't be sufficient for learn cards to see play. Frankly, they haven't spoiled a card with learn that's playable on its own. That may change, but it also may not. The closest is Professor of Symbology, and that's mainly because she's white. White doesn't get velocity cards very much, and thus any white velocity card automatically becomes a good white velocity card. This is enhanced by the mana cost and stats. However, there's no deck she fits into, and nothing that you'd ever play her over, which means she'd never actually see play just as a 2/1 velocity generator.

Rather, the potential for Modern comes from the wish. Karn, the Great Creator has shown how valuable wishes, and especially repeated wishes, are in Modern. This isn't a companions situation; it's just more wishes. The catch is that the only targets are Lessons, which means that the value of learn is directly tied to the value of the lessons. Which honestly feels like something a lot of professors need to hear, but I digress. If there are Modern-playable lessons that are also good enough to sacrifice a sideboard slot for, then the Professor will be especially playable. Death and Taxes could potentially gain a ton of value by repeatedly flickering her and wishing for whatever is needed. And at least if you don't have the right Lesson, she can cycle a superfluous Plains.

Of course, the problem is that (again, as of writing) there's only one potentially playable Lesson. The rest are overpriced versions of existing cards and wouldn't see maindeck play, much less taking up a precious sideboard slot. There's no justification for playing an inefficient Attune with Aether or Preordain maindeck, much less in place of a Modern-level sideboard card. Unless that changes, I'll be tuning out of another disappointing class. 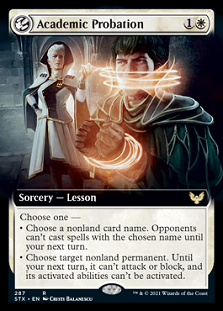 The one possible exception is Academic Probation. This card is incredibly niche, but in certain matchups it might be backbreaking. Preventing a single card from being cast for a turn is way too narrow to see real play, and Azorious Arrester already exists and never sees play. However, as a wish target, Probation might be a decent bullet. I can see it being strong against combo decks by naming the right card. I'm seeing Past in Flames or Grapeshot against Storm, Thassa's Oracle against Ad Nauseam, or Living End just to buy the turn needed to finish the game. There's some (questionable) utility in naming Supreme Verdict to again buy time for an aggro deck to close the game too. Were it an instant, it'd be potentially devastating against many combos, which is probably why it's a sorcery in the first place. But when opponents are on the verge of combo-ing off, it reads a lot like Time Walk.

There's at least some potential in fogging a creature, though it's much less practical. Trying to prevent a combo attempt by Heliod Company is only a brief reprieve and a waste of a card. The best I've come up with is blanking Primeval Titan for a turn cycle, which isn't terrible if all you need is that turn cycle to win. However, that's still a pretty weak application, and if Probation is as good as it gets then learn is on the ropes. If there are more niche-but-effective cards, there may be something here.

Next up, and sticking with the instant and sorcery theme, is magecraft. Magecraft is an ability label for any ability which triggers off an instant or sorcery being cast or copied. Which presumably means there will be a fair amount of copying in Strixhaven, though only one way has been spoiled. In any case, this is just for permanents which have a minor effect when you play into the set theme. The value of magecraft will therefore largely be determined by the playability of the underlying card and not the ability. It's not that the abilities are poor, but that they're not good enough to make up for an otherwise unplayable card. At least, there aren't any yet. Archmage Emeritus is close, but not close enough.

The one magecraft card that might make it (again, as of writing) is Witherbloom Apprentice. Draining for one point per spell isn't anything special, but this is Modern, and we have Storm.  Two-mana wizards are a staple of the deck, and while Apprentice doesn't fit the color (or creature type) scheme, it halves the storm count necessary for a lethal Grapeshot, which opens up some possibilities. Suddenly, Jund Storm seems possible, as it doesn't need blue's 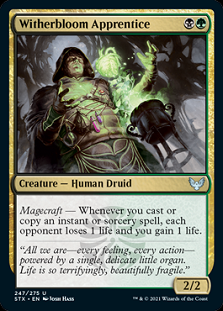 cantrips, cost reducers, or Gifts Ungiven to generate 20 total storm. Instead, there's a chance that red's mana production alongside green land search and black card draw can do the job with only ten spells. I'm not sure that's actually better than traditional Izzet Storm, but it's something to explore.

However, the greatest potential is for some entirely new combo to emerge. Apprentice triggers on any instant or sorcery, or their copies. In Legacy, Apprentice and Chain of Smog targeting yourself is a kill, because Chaining yourself can be done infinitely. There is nothing comparable in Modern, or at least I couldn't find it after hours of looking and asking reddit. The existing options for making lots of copies are both storm cards, specifically Gravestorm and Weather the Storm, and there's no way to generate the necessary storm in a single turn without the red rituals. However, maybe there will be a new card which will enable Apprentice. At minimum, it's one to watch. 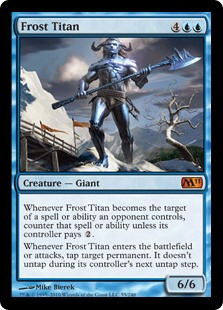 Next is ward. Ward is a new name for a mechanic that I first remember seeing on Frost Titan. Wizards has formally keyworded it so that they don't feel compelled to put hexproof on so many creatures because they want them to matter and have learned that weakening removal too much causes problems. White, blue, and green will be getting variations on the Titan version while black and red get the Terror of the Peaks life payments. There's nothing notable for Modern here, except that hopefully this also means that Wizards won't feel like they have to make everything gain ridiculous amounts of value just by casting it to matter so we never get Uro, Titan of Nature's Wrath again. Hopefully.

Finally, MDFC's are back again. That's it. Wizards is trying to mechanically tie their sets together more, and so they've included the same mechanic in three sets. Nothing we haven't seen, and nothing I haven't discussed already. 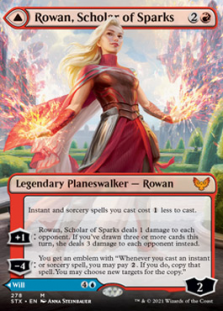 That could have been the end, mainly because the MDFC's spoiled so far are the college's deans, and none of them are Modern playable. However, also spoiled is the first MDFC planeswalker ever: the twin walkers Will and Rowan Kenrith. Both sides have Goblin Electromancer's cost-reduction ability, and Rowan is cheap enough that I could see her seeing play. Will might too, but he'd be an afterthought at five mana. However, Rowan does have two problems. At three mana, she's more expensive then Electromancer or Baral, Chief of Compliance, which would price her out of Storm. Plus, Storm doesn't always play a full set of either creature, so why play a three-mana version? 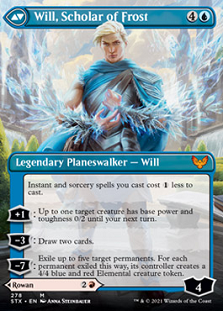 Secondly, she's fragile, with only two starting loyalty and a +1 ability. Wizards actually learned from War of the Spark, apparently.

However, don't count Rowan out. Her +1 can be a potent finisher when fully powered, and Prowess tends to play a lot of cantrips. I can see certain versions using her as a finisher and enabler with Will as a long game option. In such a deck, Rowan's fragility would be less of an issue, since opposing removal will be strained by the creatures and it's unlikely that creatures would be able to attack her before she can build some loyalty. Even if she does just die, that's removal that didn't hit a creature, which may be good enough for Prowess. Stranger cards have seen play for stranger reasons.

So marks the end of this introductory article. I hope everyone now understands how Strixhaven means to continue. Next week is the metagame update, but after that, class will resume with the rest of the spoilers. Plan your studies accordingly. And most importantly, before asking any questions, check the syllabus first. Class dismissed.