Recently I had the chance to participate in the X-Files CCG 25th Anniversary Online Tournament presented by the MM XFILESCCG YouTube channel. You can watch the full video of my first match here. Preparing for this tournament reiterated four lessons of Magic finance that bear repeating.

I was introduced to the MM XFILESCCG channel while doing research for a book on '90s TCGs I'm writing. My wife and I were rewatching the TV series at the time, and the combination of the two rekindled my interest in the game. I dug out my old cards, taking stock of what I still had, what I'd lost, and what I should track down in order to start playing again. When I watched the announcement video for the tournament, I was interested but on the fence about taking part. It had been 20 years since I last played. I still had a good part of my collection from back in the day, but I didn't exactly have a tournament-caliber deck ready to dust off and battle with. Where would I begin?

Understand What You're Buying Into

When making any sort of decision, it is important to understand what you are getting yourself into. This is especially the case with financial decisions. When buying into a new game or a new format, it's important to understand how the game or the format plays. For examples of understanding and buying into a new Magic format, check out my articles Buying Into Modern and Understanding Metagames for Success and Profit. I approached diving back into the X-Files CCG with the same mindset.

For those without the proper security clearances, The X-Files CCG, based on the hit television show, was first published by USPC Games in November 1996, as the show's popularity was reaching its peak. Players take on the roles of operatives of the Syndicate, a shadow government organization from the show, each with a secret X-File they are trying to protect (there are 41 to choose from). As the puppet-master behind the scenes, each player controls a team of FBI Agents investigating cases trying to uncover clues to expose the identity of the opponent's X-File. 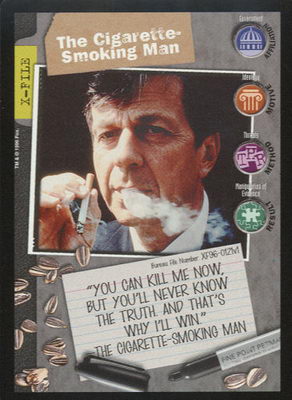 The gameplay is dynamic, like a much more strategic version of Clue, with plenty of opportunities for interaction by both players. Everything about the design of the game from the visual layout and images of the cards, to the gameplay itself, evocatively captures the flavor of the show. 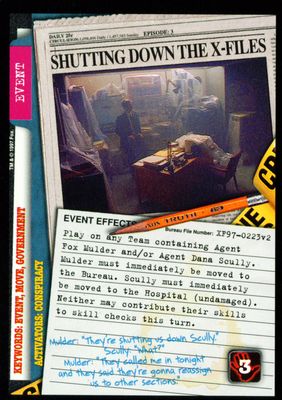 After bursting onto the TCG/CCG market at the tail end of 1996, the X-Files CCG only lasted one expansion, 101361 (commonly referred to as Mulder's Birthday), and a reprinted core set, The Truth Is Out There, reprinting cards from both Premiere and Mulder's Birthday, as well as introducing some new rares and ultra-rares (rarer than Magic mythic rares) to the mix. The promised 22364 (Scully's Birthday) set was designed and ready to be printed, but never inked to card stock as USPC Games pulled the plug, killing the game at the height of its popularity. 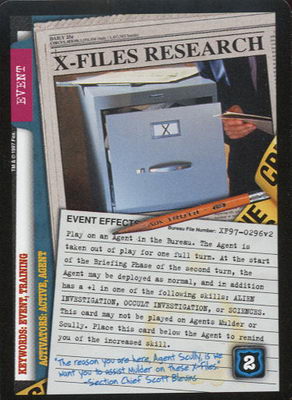 Because there has not been an active metagame in 20 years, I needed to do some research on what decks had been popular or powerful back in the game's heyday, to form a picture of what a potential metagame could look like. To that end, I scoured the internet and my collection of InQuest and Scrye magazines for decklists and strategy guides.

Under the Advanced Tournament rules, players construct a 60-card deck with no more than two of any particular card, not counting Agents or their X-File. Agents are chosen based on their abilities and their Resource Value, found in the lower righthand corner of the card. A player's agent team cannot exceed 20 RES points. For example, if choosing to have Mulder and Scully as agents, each with a RES value of seven, you'd have six points of Agents left to add to your starting team. There were 24 agents in the Premiere set alone, including ultra-rare alternate image versions of the main cast, giving players plenty of options for deck construction. You can check out a gallery of Agents and other cards from Premiere here.

The rest of the deck is stocked with Site cards, which you investigate to unlock clues about your opponent's X-File, Witness and Equipment cards which can aid in your investigation, Events and Bluffs, which can aid you or hinder your opponent depending on the card, as well as Adversaries and Combat cards. Adversaries can hinder or harm an opponent's Agents, sending them to the Hospital zone and out of action. Combat cards are used to help or hinder Agents in combat against Adversaries. In a typical game, opposing players' Agent teams never engage one another in combat, with only a couple rare cards from the 101361 expansion allowing Agent vs. Agent combat. This is part of the flavorful design of the game, as opposing players can have copies of the same Agent, representing the conflicting webs of power, loyalty, and deceit the characters find themselves in throughout the course of the show. 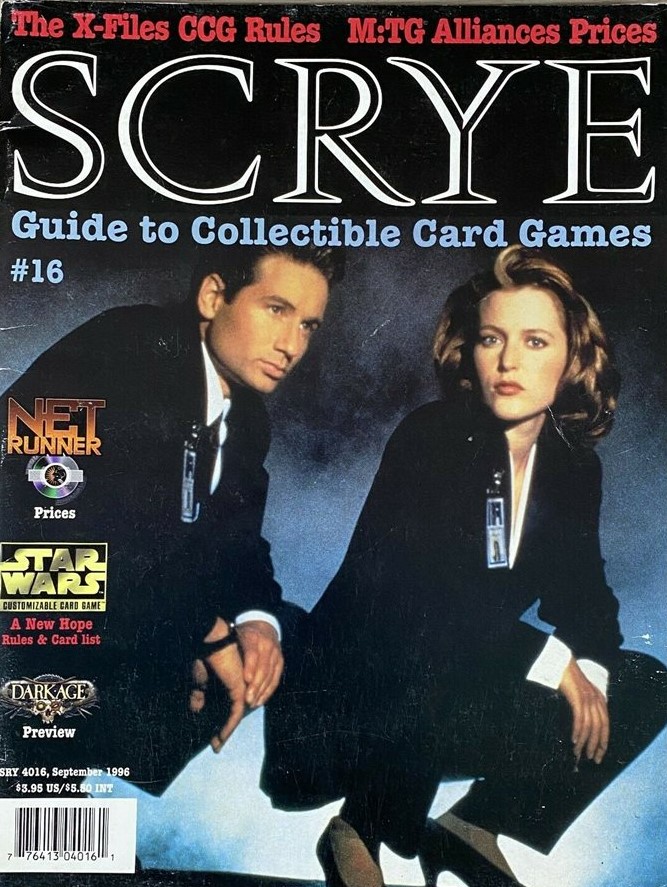 Looking at the decklists and strategy articles I could find, and watching some of the games broadcast on the MM XFILESCCG channel, I realized many of the competitive decks included a number of cards from the Mulder's Birthday expansion, and powerful Haymaker cards like Unexplainable Time Loss, Deep Throat, Limited Choices, and Believe The Lie, which are almost all ultra-rares or limited-run promo cards. I was uncertain I had everything I needed, but I had two resources at my disposal: a massive collection of dead CCG product from the '90s, and access to the Dead CCG Collectors group on Facebook.

Don't Hesitate To Move Something Not Helping Advance Your Goals

Over the winter, I began going through my dead CCG collection. In the process, I unearthed nearly two booster boxes worth of Middle Earth: CCG cards, including 45 rares, a promo, and 554 common and uncommon cards in a 70/30 split. Though a huge Tolkien fan, I've never played Middle Earth. From what I remember, the price at the time I acquired all of the product was too good to pass up, but it had been sitting in a box in my closet for decades. I posted a listing up, looking to trade for equal value in X-Files cards, and within a few days was able to work out a deal for four of each common and uncommon card from Mulder's Birthday, and an equal number of rares, including Unexplainable Time Losses. 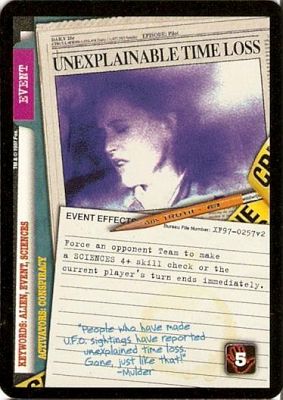 At the same time, I also made a sale of some sealed boxes of Galactic Empires, another dead CCG, and rolled that money into buying a second collection of X-Files cards from an opened booster box of Mulder's Birthday. The collection included an ultra-rare Alien Stilleto card at a good price. 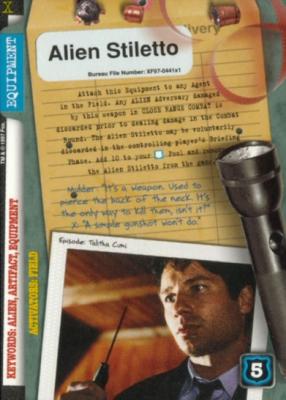 These acquisitions bridged a huge gap in my X-Files collection, bringing me closer than I realized to having a viable deck until I dug into the deckbuilding process. Had I not been willing to let go of the Middle Earth and Galactic Empires cards in the winter, I would not have been in a position to build a deck for the X-Files tournament in the summer.

Look For Cards That Have Similar Functions

After settling on a decklist that suited my playstyle, I realized I was still a handful of rares and ultra-rares short of the most optimal list, and I would likely be foregoing some of the most potent Ultra-Rares and promos due to market scarcity. For everything else I needed to finish the deck, I had a couple of options: reach out to my network to try and trade or buy the cards I needed, buy the cards I needed from a dealer if I could find one, or alter the decklist.

In Magic, the card Thoughtseize is a staple of the Modern format, seeing play in virtually every deck which has the mana to cast it. Sometimes though, a deck wants more than just the four copies of a given card in a deck, which is why Inquisition of Kozilek is another popular card in the format, performing a similar though narrower function.

Or look at Modern Burn, which plays all of the one-mana spells which do three damage, including Lightning Bolt, Lava Spike, Rift Bolt, and Skewer the Critics. In Burn, redundancy is crucial to having the combination of cards necessary to kill the opponent as quickly as possible.

In the X-Files game, because the card limit is only two, if you want more copies of cards that have a similar effect, you're forced to do some deep-diving into the card pool to come up with options. The best example of this is the X-Files card Limited Choices, an ultra-rare from The Truth Is Out There which I had wanted to include in my deck. 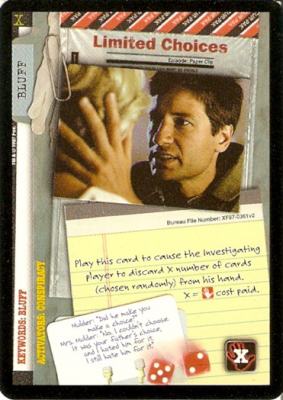 Limited Choices is one of the most powerful cards in The X-Files CCG. It is the equivalent of Magic's Mind Twist if you only needed to pay the X value of the card and not one additional black mana. It's very easy to force your opponent to discard their entire hand with this card with only a minimal investment in resources. Because of the card's scarcity, I've yet to be able to track down a set of them. Thinking I wanted a similar effect in my deck, I looked at the card list and found two other discard cards, Detective Tony Fiore, and This Is Not Happening, which were both more like Mind Rot effects. While lacking in raw power, these were the only options available to me if I wanted to include discard effects in my deck. Talk about limited choices.

Make Use Of All The Resources At Your Disposal

I quickly exhausted the possibility of buying cards I needed from a dealer, as there are few dealers that even sell cards for this game. I made some concessions in my list, but still needed a couple of sites and an equipment card that were non-negotiable for my strategy. I posted my want list on The X-Files Facebook group, and one of the tournament organizers actually reached out to get me the last few cards I needed. Had I not explored all avenues, and used all the resources at my disposal, it's likely I would not have been able to assemble a viable deck. While lacking some of the power cards means I don't think I have the deck to beat, I think my deck still has a viable strategy, and I hope to be able to convert that into a deep run in the event.

What have you learned from playing other games that has aided you in your understanding of Magic? Has this article inspired you to check out The X-Files CCG? Let me know your thoughts in the comments.