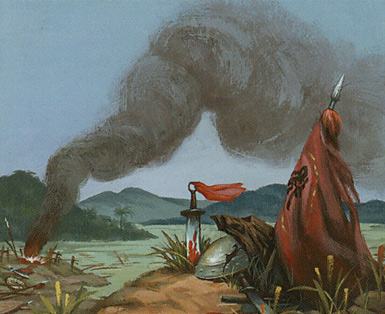 Thorn bushes spring up wherever the army has passed. Lean years follow in the wake of a great war.

In the last article, we started dealing with Portal Three Kingdoms. It’s the first Magic expansion conceived with the intention of being published exclusively in the Asian market. It’s full of references to Chinese culture and literature. Of the 52 cards ever printed with a Chinese quotation as flavor text, 50 come from this set.

Last time, we analyzed the flavor text of Greed and Zodiac Dragon and looked at three other cards with Confucius quotes. Now, let’s move to three different authors: Mencius, Lao Tzu, and Sun Tzu. We’ll leave Luo Guanzhong, the most represented author, for an article all to himself.

Let’s start with the least represented author. Mencius lived in the fourth century BC and left us a philosophical text known as Mencius. Only one Magic card displays a quotation from Mencius, and that is the beautiful Three Visits.

Trying to meet a worthy man in the wrong way is as bad as closing the door on an invited guest.

Three Visits is a common green sorcery. For the cost of two mana, it lets you fetch a forest card out of your library and put it onto the battlefield. It’s not limited to basic Forests, and the land enters the battlefield untapped. I really like the concept and the art: it looks like an episode from an ancient tale, but I’m not sure I get the link with the flavor text. It’s obviously a saying, a proverb, as it gives general advice on how to behave in everyday life. Perhaps, it advises not to show up empty-handed?

Lao Tzu is also the author of a philosophical text, from roughly 200 years earlier, in the sixth century BC. his work the Tao Te Ching, is among the most influential pieces in world literature and has been widely translated. Staying within the philosophical realm for our source material has particular implications when it comes to Magic flavor texts. In Magic flavor, “philosophy” normally means “proverbs”. There are three cards featuring quotations from Lao Tzu’s works. We dealt with the first one, Greed, in the last installment. It was the only card with a Chinese quotation printed before Portal Three Kingdoms. Today we will explore the other two. 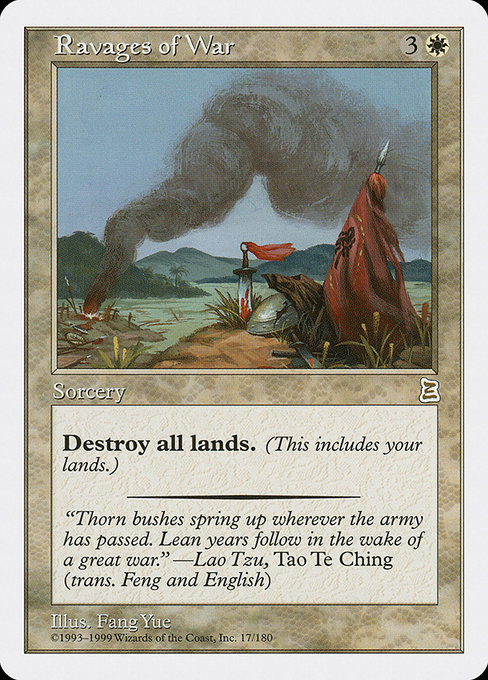 Thorn bushes spring up wherever the army has passed. Lean years follow in the wake of a great war.

Ravages of War is among the most famous cards from this set, together with Zodiac Dragon and Imperial Seal. It’s a functional reprint of Armageddon, with a funny bit of reminder rules text for new players: “This includes your lands.” The flavor text is great, as it shows what stays behind after a battle: that is, famine and poverty. 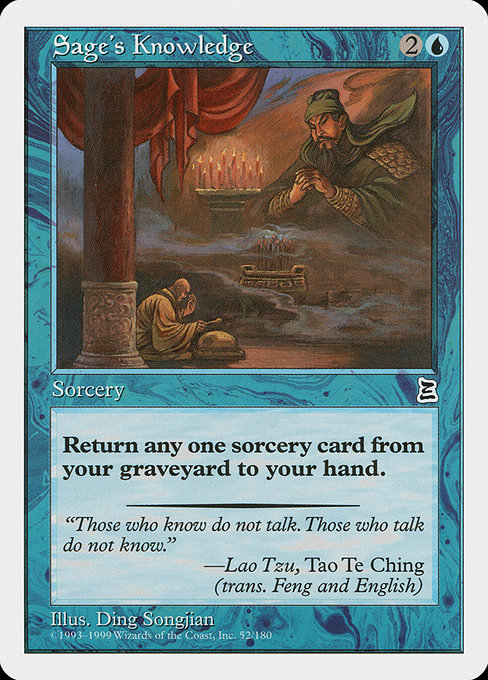 Those who know do not talk. Those who talk do not know.

This blue sorcery lets you get another sorcery from your graveyard back into your hand. Very blue. And the flavor text is also pretty consistent with the card and with the color. Together with the art, it gives me some sort of Meditate vibes, since that card also mentions silence and calm.

Things get a bit different when we move to Sun Tzu. With five cards, he is one of the most quoted authors in Magic. As we saw in the first article of this series, he would deserve fifth place in a hypothetical Top Eight, right after Luo Guanzhong, Shakespeare, Coleridge, and Poe. Sun Tzu was a Chinese general, strategist, and philosopher who lived in the fifth century BC. His most famous work is The Art of War, which is still taught in military schools and studied all around the world. Does a change in the genre of the source material mean a change in the nature of the flavor quotes pulled from it? Let's find out. 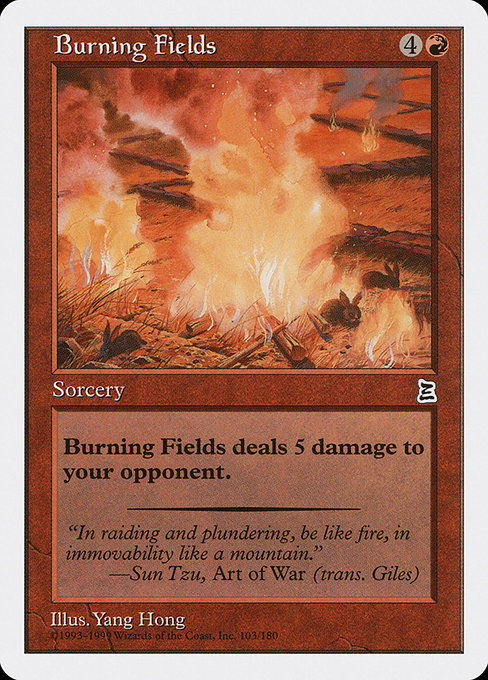 Burning Fields is a classic Red Sorcery, dealing five damages to your opponent for five mana, just as Lava Axe. As you can see, not much has changed, even if the work this comes from is technically a war treatise. This sentence still sounds like a maxim, a general norm that you should follow. I can see why it mentions fire, but as for the mountain it’s not totally clear. 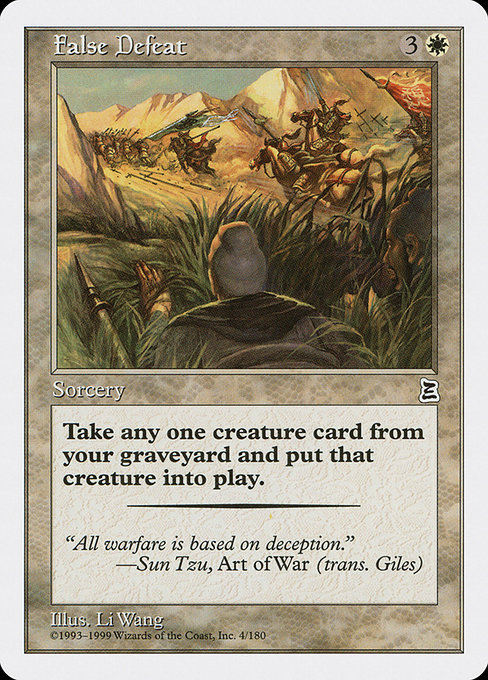 All warfare is based on deception.

Now, this is an interesting, white Zombify. People must have fallen victim to it many times since it can't be expected. The flavor text is a bit out of focus, for deception in Magic is mostly a quality of the color blue, rather than white. Still, in my opinion, it’s a nice choice with great art. 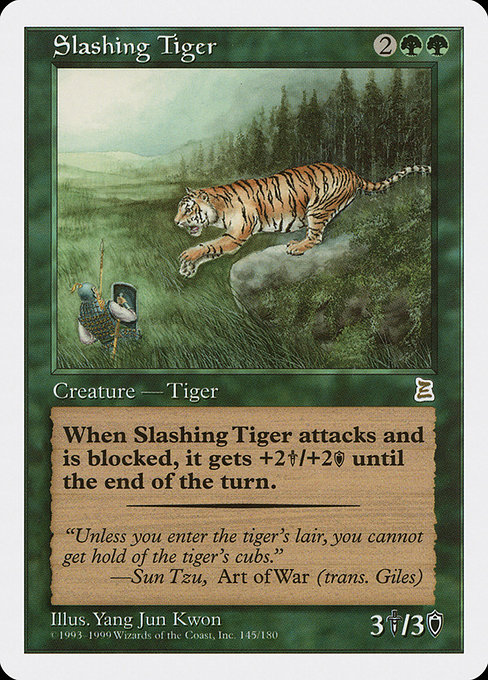 A creature, finally, after all those sorceries. Slashing Tiger gets +2/+2 until the end of turn whenever it gets blocked. This is a very common ability for green, but I believe it would have been more spot-on if it got pumped when it blocked. After all, the flavor text talks about a tiger protecting her cubs. 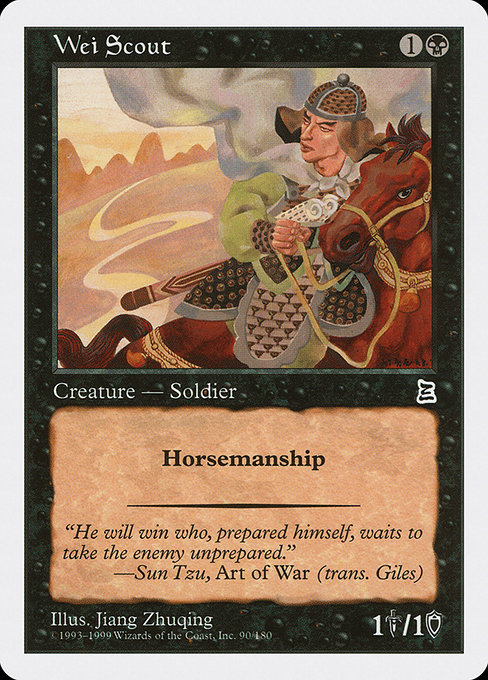 He will win who, prepared himself, waits to take the enemy unprepared.

Here comes another creature, this time a 1/1 black soldier for two mana with horsemanship. Horsemanship is an evasive ability that acts as a variation of flying, and only appears in Portal Three Kingdoms. The quotation is not very impressive, simply suggesting that the winner of any duel will be the one who is more prepared. 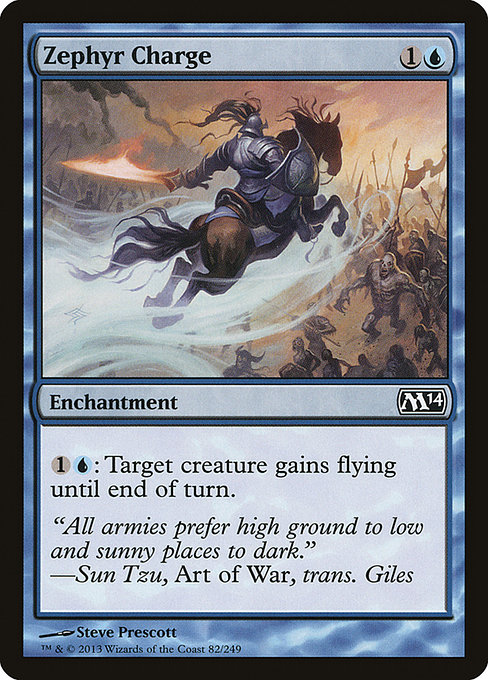 All armies prefer high ground to low and sunny places to dark.

The last card we are analyzing today is a very special one. In fact, we addressed Zephyr Charge in the first installment of this series. Portal Three Kingdoms came out in 1999. It wasn't until 2013, fourteen years later, that this blue enchantment saw print in Magic 2014. Not only was this Sun Tzu's last appearance in flavor text, but this was also the last card ever printed with real-world flavor text.

It’s funny to see how things haven’t changed in almost fifteen years: bad cards are often those getting the most interesting flavor texts. Zephyr Charge is mostly unplayable, even in limited. It allows you to give creatures flying in exchange for two mana, and that’s it. As for the art, it represents a knight charging in mid-air, thanks to what looks like a gentle breeze.

The quotation is dangerously close to obvious, and I believe this was the case even when it was first written. Armies prefer the high ground, and the creative team decided to match this cheap consideration with a knight flying over the enemies. Who are we to complain, though? Perhaps, this really was the time to stop using real-world quotations as Magic flavor text?

We have expanded our overview of Chinese literary sources in Magic flavor text into Portal Three Kingdoms. Now, only flavor text from Luo Guanzhong is missing. What did we learn? First, we now have a better understanding of how different flavor texts are depending on their provenance. The quotations we saw in the past installment came from philosophical texts, as well as the first three we analyzed today. The last five, all from Sun Tuz, come from a war treatise.

Surprisingly, they don’t seem to differ that much. I would go as far as to say that it’s almost impossible to recognize the source genre of a quotation. In the end, they all sound like proverbs or generic maxims.

The most noticeable difference between those coming from The Art of War versus the rest, is they deal a bit more with warfare scenarios and a bit less with everyday life. In the next article, we will dive deep into the work of Luo Guanzhong, and try to answer this question with his contributions added to the mix.