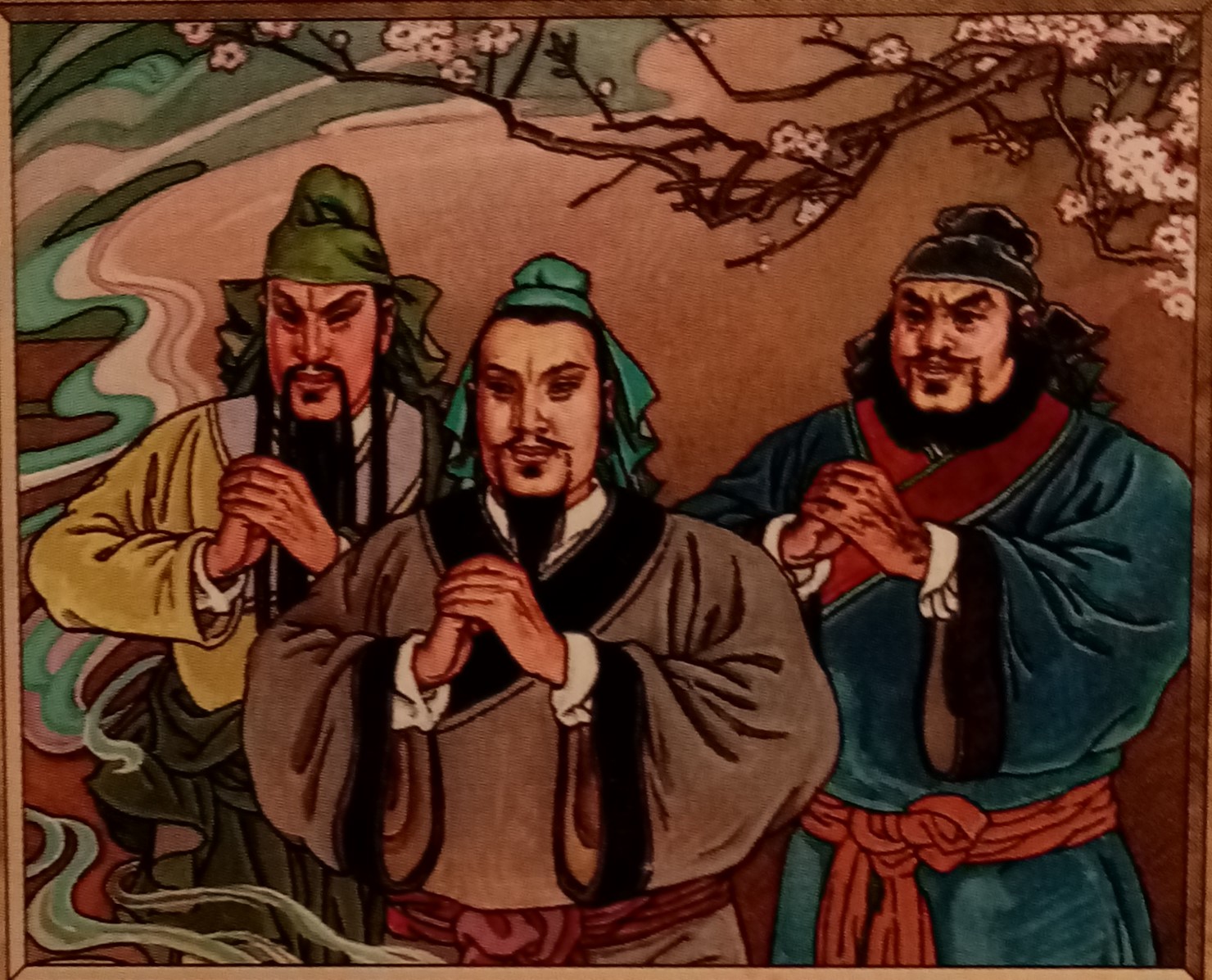 We three, though of separate ancestry, join in brotherhood . . . . We dare not hope to be together always but hereby vow to die the selfsame day.

MTG Wiki makes it clear: "Unless otherwise noted, all quotations on Portal Three Kingdoms cards are from Guanzhong Luo, Three Kingdoms: A Historical Novel (Beijing Foreign Language Press/Berkeley: University of California Press, 1991), Moss Roberts, trans." This means that every flavor text showing up between quotation marks, unless otherwise noted, comes from that book.

That is why Luo Guanzhong, although never mentioned directly, is the most quoted among real-world authors, with over 40 unique cards. After dealing with all the other thinkers and writers of Chinese literature in Magic flavor text the past two installments, let's conclude by dedicating this whole article to Guanzhong's historical novel: Three Kingdoms.

Written in the 14th century by Luo Guanzhong, Three Kingdoms is set during the 2nd and 3rd centuries, more than one thousand years earlier. It's known as a "historical novel" because it's not exactly a historical treatise, nor does it contain a made-up plot. Based on true events, it romanticizes the clashes of feudal lords that took place at the end of the Han Dynasty.

Interestingly, there are some parallels with Roman history of the same period. At the end of the 2nd century, a coup d'état took place in Rome, ending the Antonine dynasty abruptly. Since then, several emperors quickly succeeded one another, with no stability for a few years.

It certainly seems like a great source for flavor text, and that's the reason why it was chosen as the main setting of Portal Three Kingdoms. More than 40 cards feature excerpts from this work in their flavor text, and 12 of them compose the "Chinese Zodiac" cycle. While we won't be able to analyze all of them, we are going to try and emphasize the most interesting pieces, in order to draw some conclusions on this edition. I will pick a card from each color. 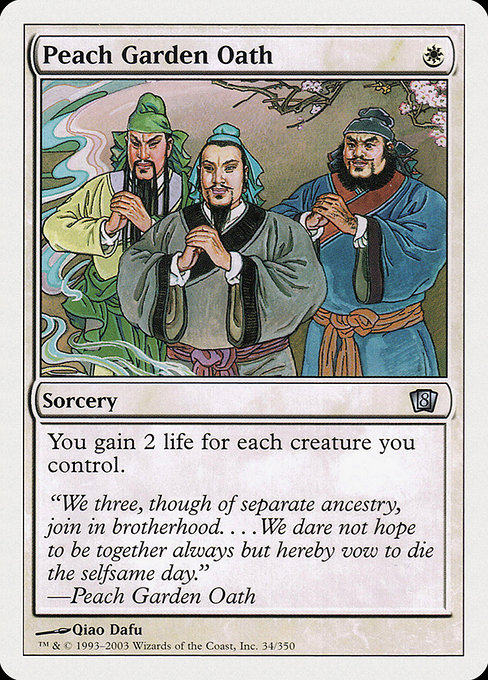 We three, though of separate ancestry, join in brotherhood . . . . We dare not hope to be together always but hereby vow to die the selfsame day.

Let's start with a significant example of what we can expect, from the point of view of lore. The quotation on Peach Garden Oath comes straight from Luo Guanzhong's novel. We can already see what is going to be a big difference in the cards we are analyzing today. It's not a generic sentence trying to suggest a way of behaving or a rule for life, as we've seen many times in the previous installments. Instead, it refers to a very specific passage from a certain novel, which in turn refers to historical happenings.

We may not be familiar with it, but let's not forget that Portal Three Kingdoms was designed specifically for the east-Asian market. As we will see, that heavily influenced flavor choices, among other things. The image shows three fighters (Liu Bei, Zhang Fei, and Guan Yu) swearing an oath that will make them brothers. It represents the ideal of true fraternal loyalty, but they also swear to "perform our duty to the Emperor and protect the common folk of the land".

The oath would go on for a couple more lines: "Let shining heaven above and the fruitful land below bear witness to our resolve. May heaven and man scourge whoever fails this vow." I greatly enjoy the use of this passage in the flavor text. Overall, Peach Garden Oath is one of my favorite cards from this set. I like the art, the quote and the concept of deep friendship it depicts. 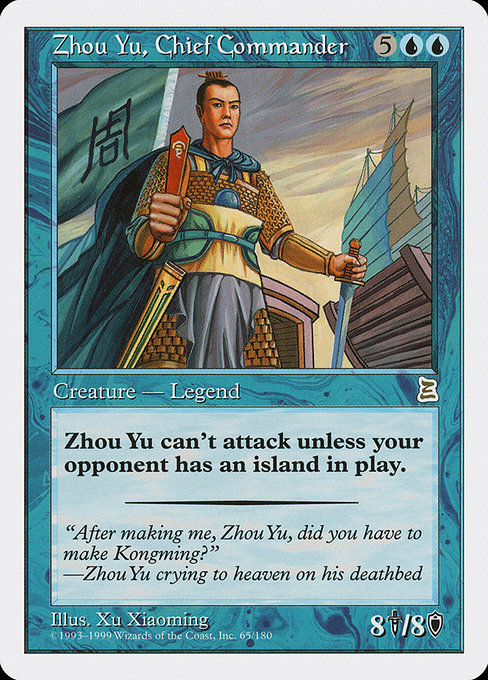 After making me, Zhou Yu, did you have to make Kongming?

—Zhou Yu crying to heaven on his deathbed

Here's another quotation coming directly from the novel. Again, it's a very specific one. This time, the very name of the card is a reference to a historical person. Zhou Yu was a general and strategist who lived in the third century, during the aforementioned period of civil wars. He is also one of the major characters in Three Kingdoms. In this flavor text, we read his final words, pronounced after having been shot by an arrow during the Battle of Jiangling.

It appears a pattern is emerging. When flavor text in Portal Three Kingdoms comes from Luo Guanzhong's novel, it's usually referencing specific characters and historical events from the novel. Otherwise, when coming from Confucius, Lao Tzu, and other authors, the quotes are more generic, more in line with what we are used to seeing in the other sets. 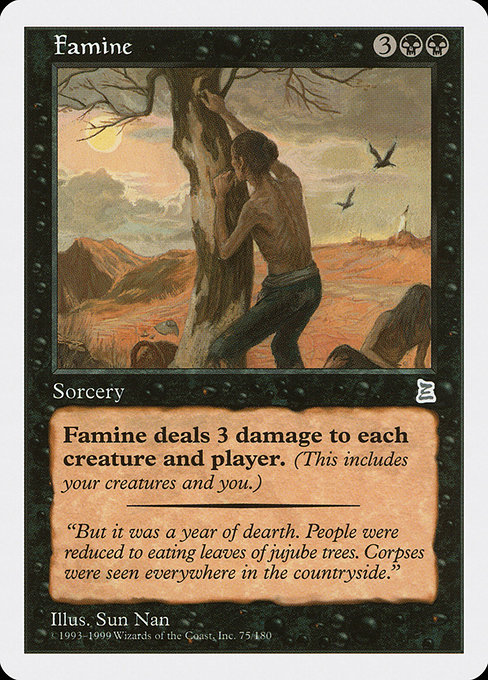 But it was a year of dearth. People were reduced to eating leaves of jujube trees. Corpses were seen everywhere in the countryside.

I wasn't expecting it, but it looks like this actually contradicts what we were starting to define as a pattern. In fact, despite coming from the Three Kingdoms, Famine does not mention any specific person or event. It is totally possible that people with a deeper knowledge of Chinese culture recognize this as a quotation, of course. On the other hand, it makes perfect sense even when taken out of context.

Somehow, it reminds me of what we saw happening with cards such as Fissure and Soltari Priest. The point is that, if you are fond of literature, you might recognize those flavor texts as coming from Plato, Seneca, and Luo Guanzhong. Otherwise, they are still totally understandable, because they refer to generic concepts such as war and death.

This black Sorcery deals three damage to each creature and player. It's a common effect for black: just think of Pestilence, Pox, and all the other cards that affect each player and creature at the same time. I believe this is a great choice for a card called Famine, and it also makes a good addition to this pool of similar black cards. 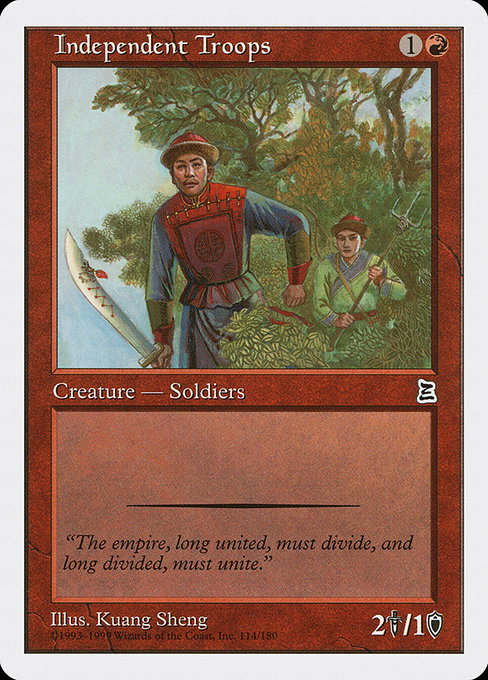 The empire, long united, must divide, and long divided, must unite.

This is another good one, in my opinion. Independent Troops is not a powerful creature, being a vanilla 2/1 for two mana. And the flavor text is perhaps a bit too pompous on such a humble card. What is interesting, though, is that this sentence is the opening of the whole novel. We could consider this card as the ideal opposite to Zodiac Dragon, whose flavor text quotes the end of the novel.

If you are curious, the book goes on with another bit of text that I find interesting: "Thus it has ever been". It's not crucial, as it is already clear from the first sentence that it refers to a cyclical and ever-present condition. Nevertheless, I believe it would have been a nice addition to this flavor text.

Since an incipit, the opening words of a text, is so important to the work it comes from, we can deduce this must be a well-known quotation. It probably sounds more or less how "Sing, o Muse, of the rage of Achilles" from Homer's Illiad sounds to the ears of a Westerner. 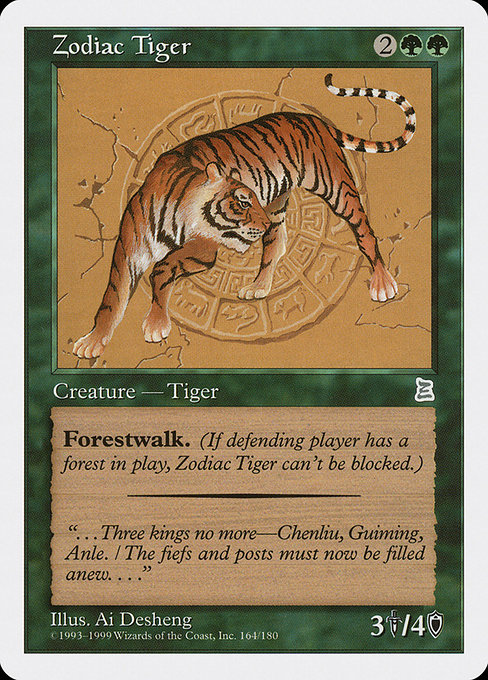 Let's close our brief analysis with a green creature, Zodiac Tiger. The Tiger is part of the "Chinese Zodiac" cycle of creatures in the set. All twelve of these creatures contain flavor text in verse, coming from a poetic section of the novel. Zodiac Tiger is a 3/4 creature with forestwalk for four mana. Decent stats compared to the other cards in this cycle.

As for the text, it sounds like a dramatic moment in the book. We get that it's important, even if we don't know or don't remember the exact reference. It's a time when the political balance needs to be renewed. This is a transferable concept, as similar moments have happened in the course of every empire, all over the world.

After analyzing the flavor text of a few cards, I think we have found a way to approach understanding this unique set. From a western perspective, Three Kingdoms might seem like a very obscure book on which to base a Magic set. To the Asian market though, especially China, Three Kingdoms is as ubiquitous as the legends of King Arthur in the west.

When studying the set, we must keep in mind two things: that the set was intended from the start for publication only in the Asian market, and the ubiquity of the Three Kingdoms novel in that market. When you consider both of those things, all the major decisions on the set seem like a no-brainer. This includes not just the decision to design the set top-down, with the Three Kingdoms novel as the source.

Everything from the individual cards created, the references used within flavor text, and even the artists chosen to illustrate the cards, were all made with that in mind. That those of us outside the Asian market know of and care deeply about this set more than 20 years after its publication is a testament not just to the success of the set, but to the worldwide popularity of Magic.

When quotes take the form of proverbs and maxims, they are typically more understandable to the general public, even if they are not familiar with the source material. This was as true with other sets as with Portal Three Kingdoms (think of Famine). On the other hand, when flavor text refers to specific characters and quasi-historical events, more knowledge of the source material might be needed to properly appreciate them. This makes Portal Three Kingdoms unique, in that no other Magic set save Arabian Nights has come close to the same depth of literary and cultural significance.

To truly understand the depth of that significance, imagine if Wizards designed a set based on the legends of King Arthur. In order to capture a similar effect, they would have to make cards for all the characters, places, and events from those legends. Additionally, they'd have to embed quotes from the legends throughout the flavor text of the cards.

When we examine Portal Three Kingdoms in that context, we recognize the great scope of it, from a flavor point of view. It is the depth and scale of the project overall, and how well they executed it that is truly impressive, (especially when you consider that most of the design was done by one person). Even when there are individual pieces of flavor text that are weak, there are others that are more spot-on that make up for it. This is of course true of all Magic sets, as we've seen.

Based on what we've studied throughout this series, I believe there are two extremes to avoid when creating flavor text. The first is the usage of overly generic sentences (such as Seneca's maxims), which may often sound boring and obvious. The second is the usage of overly specific references, which may sound academic and lead to the danger of "perceived edutainment," which we discussed in the first article of this series.

The flavor of Portal Three Kingdoms is quite well-conceived. As we saw in the last three articles, there are only a few excesses on one side or the other. Overall the set is a remarkable and memorable work both in terms of design and flavor. Will that trend continue as we move on to examine other authors? In the next article, we'll turn to English-speaking authors such as Shakespeare, Coleridge, and Poe. Stay tuned!