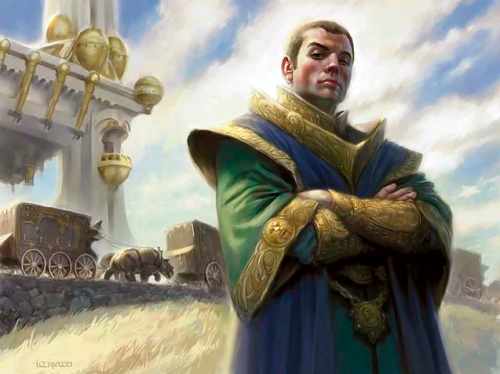 On this week's Weekly MTG show, Arena Executive Producer Chris Kiritz joined host Blake Rasmussen for a conversation on the Arena economy. You can find a video of that live broadcast, and the accompanying article on DailyMTG.com. Rasmussen described their talk as "The start of a conversation," implying that there will be more down the line. The big takeaway is that there is change coming to Arena, but nothing truly transformative from the formula it's followed since day one of its release. Let's unpack that formula so we can better understand today's announcements.

According to Kiritz, Arena is "Fun, fast Magic for anyone anywhere," and has been built from the ground up with that as its guiding principle. This puts an emphasis on what Kiritz describes as "Frontlist Magic" ie, current releases, Standard play, etc. These two points, the emphasis on "Fun, fast Magic," and "Frontlist Magic" are the philosophical baseline on which the Arena economy is based.

What is the Arena Economy?

The economy of Arena is all the ways players interact with the game client, including Packs, Gold, Gems, Wildcards, Individual Card Rewards (ICRs), and time. Of all of these, the lynchpin on which the entire Arena economy spins is the opening of packs.

With all of these things in mind, let's look at this week's announcements.

Let's bullet list these items, because frankly there are not that many that matter compared to the other categories, and we'll unpack a few that are particularly relevant.

These are all welcome features and improvements. Of all of them, the most impactful ones feel like the introduction of a new non-rotating format, and the improvements to Constructed events. With Historic moving to be an extension of Alchemy, it's nice to have a new non-rotating format more in line with paper play. We don't have a lot of details yet about Constructed event improvements, but there's room for optimism. So let's talk about the bad parts.

The biggest feel bad here to me is not making the new non-rotating format Pioneer. Even if we don't have all the cards for it on the client, and won't for some time, just making the format everything that's currently legal in Pioneer would be a step towards that. I'm not sure adding another format to keep track of is really what players want.

It wasn't brought up on the stream, but one of my personal gripes against Arena is that there is still no Best-of Three (Bo3) Ranked drafting on the platform. The Traditional Draft mode is great, don't get me wrong. However, I do feel like there should be Bo3 that counts towards the ladder though.

Small gripes aside, it's time to look at the concerns on the minds of most Arena players, and Wizards' response (or lack thereof) to them.

The biggest change request from players which I've heard has been the introduction of a dusting system to allow players to convert unwanted cards in their collection into Wildcards, or other resources they can use to acquire the cards they want for their collections. When asked about the possibility of Arena introducing a dusting system, Kiritz had this to say:

"The wildcard system is effectively the dust system. But rather than tie it to things that are unfun, destroying cards, we tied it to something that is more fun, opening packs. ... Instead of forcing you to destroy the cards, we give it to you upfront." It's clear from this quote that the lack of dusting is an intentional decision on the part of the developers, and that we should not expect that to change.

So if dusting cards from our collections is not an option, what about uptrading Wildcards or allowing some sort of currency conversions between Wildcards, Gems, and Gold? According to Kiritz, that is also not a consideration, as the allotment of wildcards is an intentional part of the economy.

So no dusting or currency conversions, but will players at least get reimbursements if their cards get Nerfed in Historic?

So What's the Solution?

Having shot down all of the requests from the playerbase about economic improvements, what is Wizards' solution? The introduction of two new products: "mythic guaranteed" booster packs to help players finish collections, and a wildcard bundle with 12 rares and 4 mythics for $49.99. According to Kiritz, this price for wildcards was set based on "the normal rate of opening packs."

Members of the community quickly pointed out that this math doesn't quite check out. Just buying $50 worth of packs may actually be a better value:

If you spend $50 on MTG Arena on 46 packs, then (based on a rough approximation including the wildcard wheel, wildcards in packs, and vault progress) you'll usually gain about 3 mythic wildcards and 9 rare wildcards. Besides the cards you open.

Implementing changes to the Arena economy is not an easy task. That said, the solutions presented here feel inadequate at best.

Back in December of last year, in response to the Alchemy announcement, I wrote an article partly addressing the Arena economy. In that article, I proposed three improvements that addressed player concerns and were in line with other digital-first TCGs. These included:

Even if the rates for each of these changes were heavily lopsided, I imagine they'd still be highly popular with players. Perhaps unsurprisingly, today's announcement revealed that Wizards is adamantly opposed to these types of structural changes. So where does this leave players? That remains to be seen.

Thoughts on the "Fun Factor" of Opening Packs

I think my biggest problem with the philosophy behind the Arena economy, and with Project Booster Fun in paper Magic, is the assumption that opening booster packs is an enjoyable experience. I might be alone, but outside of Limited play, I just don't think this is the case. To me, opening booster packs on their own is the equivalent of punching out all the pieces to play a board game. It's a requirement to play the game. Do I enjoy opening cool cards? Sure. And I love that new card smell as much as the next person. But they are not the essence of Magic in the same way as the compelling gameplay of the game itself.