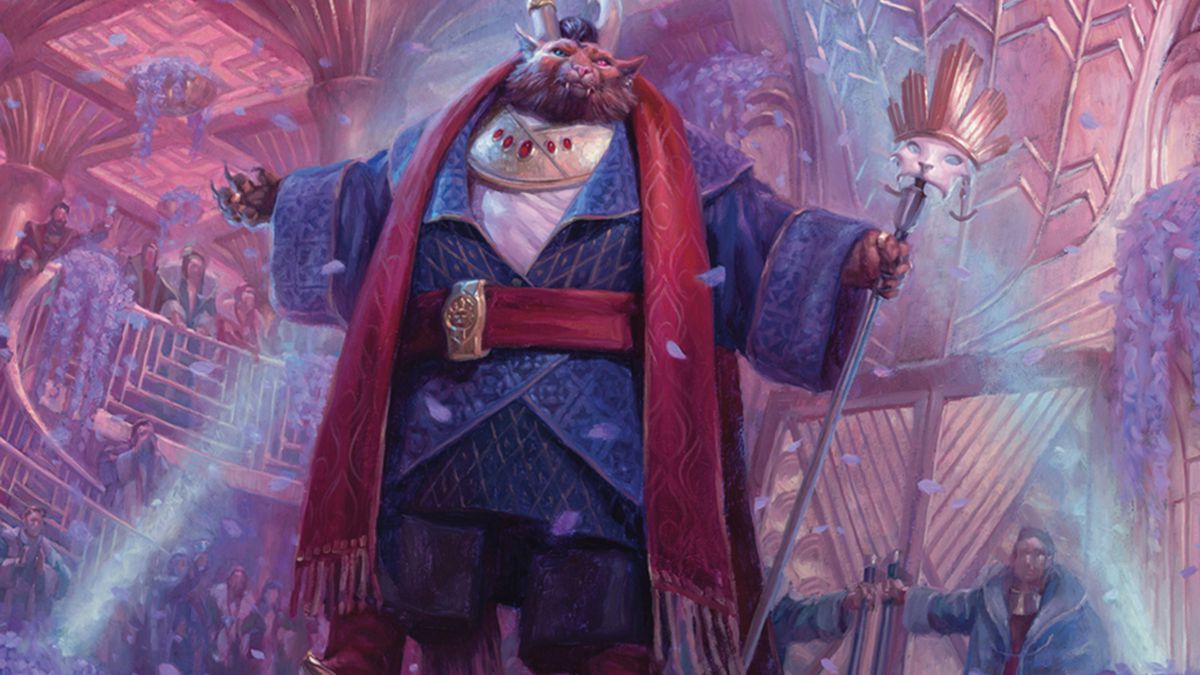 Some Basic Rules on Splashing in Draft

Splashing is always a risk/reward proposition. It provides access to more powerful cards than a two-color deck would normally allow, but facilitating an extra color means risking speed and/or consistency (usually both) in your mana base. In my first article, I expounded on the opinion that Streets of New Capenna (SNC) is a racing format. It is extremely punishing to stumble or fall behind. That risk is the primary cost you pay when splashing. Some of the best cards in the format, however, are gold. And the bountiful fixing offered in this format gives you access to many options. 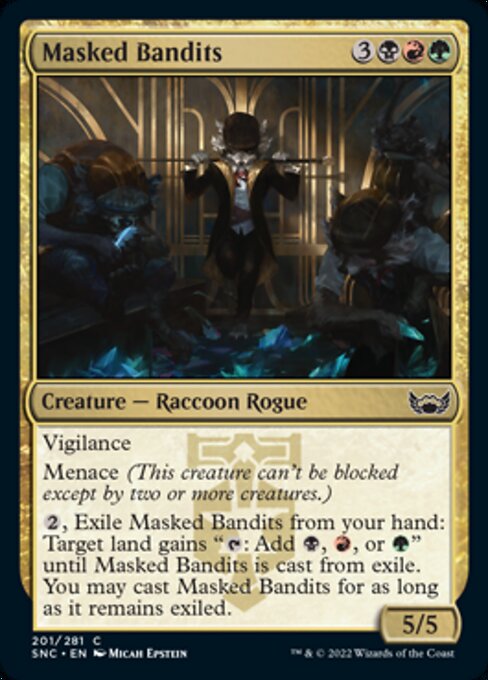 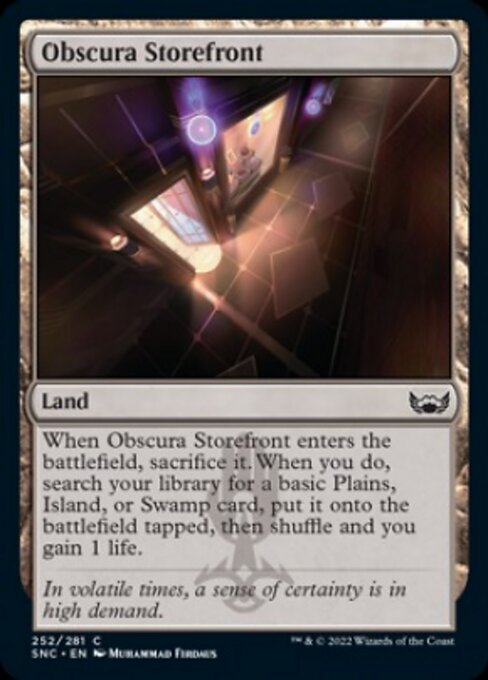 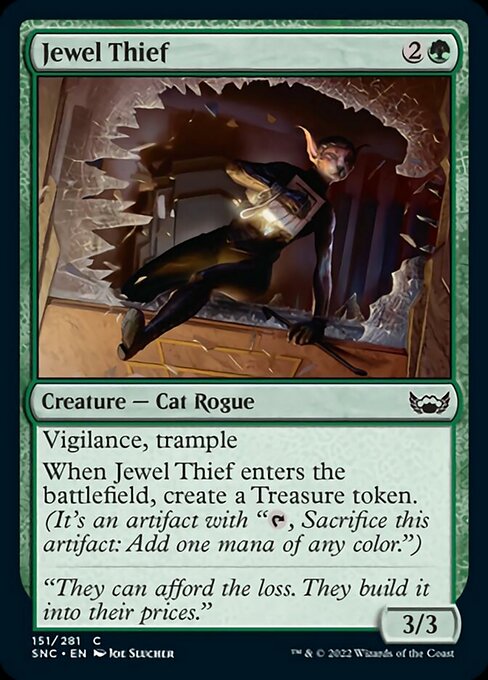 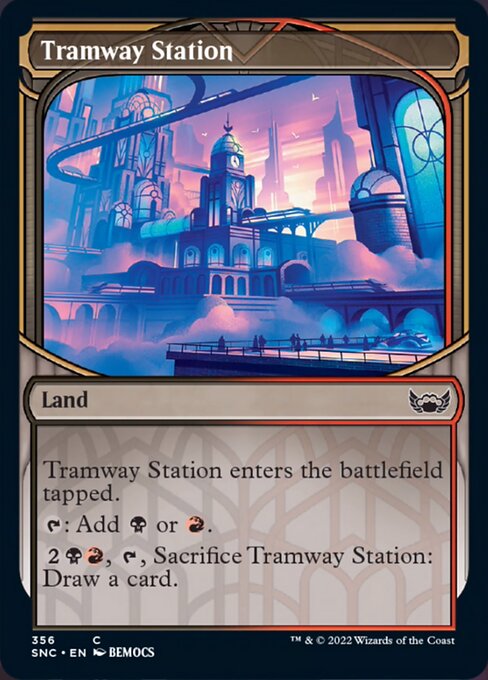 The best decks in the format are two-colored decks that have a consistent and proactive game plan. Technically, mono-colored decks with no splash have a better overall winning percentage, though being one color implies that the color was very open. If we are going to deviate from the two-color plan, we need a good reason.

In short, we must evaluate the value added to our deck from the splash against the inevitable cost that goes with it. This looks different in every deck. 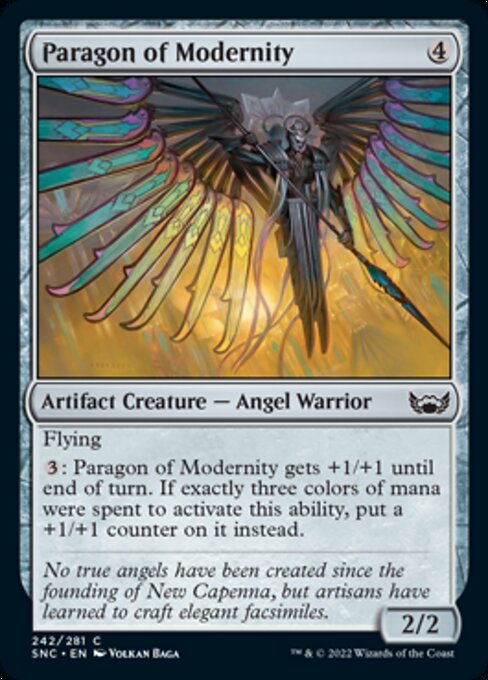 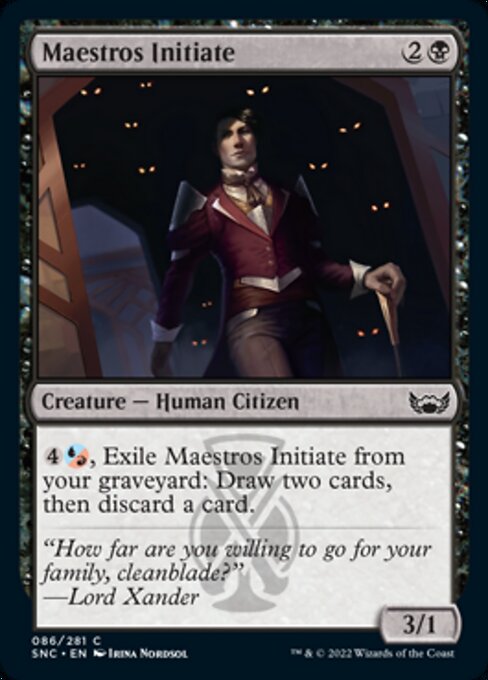 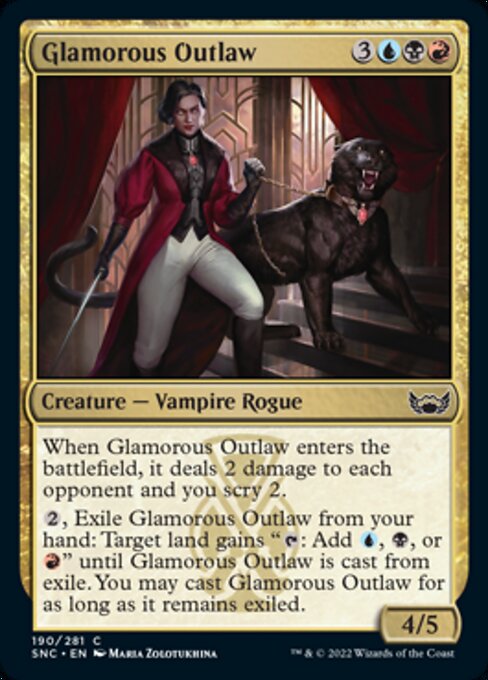 The smallest splash you can make in this format might look like no splash at all. Sometimes when we limit our options to two colors the overall power level of the deck might be lacking. However, even with minimal fixing, you can create options. Being able to activate Maestros Initiate in a Black-White deck to grind a little better in the late game isn't exactly free, but it's as close as you can get. Similarly, Paragon of Modernity can be cast with mana of any color, but a couple of fetches can unlock the upgraded activated ability, enhancing it into a late-game threat. Fixing creatures like Glamorous Outlaw can splash themselves, though the power level of this cycle makes for a dubious inclusion.

Having one off-color basic and two fetches to find it or playing a couple of tapped-draw lands to activate the third color is a very low opportunity cost. It's not free, but it's cheap. Unfortunately, this kind of splash only gives you what you pay for and is relatively low impact. You might draw an untimely tapped land, but the drawbacks of this splash are relatively minor. Unfortunately so are the upsides. What you really want to be splashing for is something powerful. 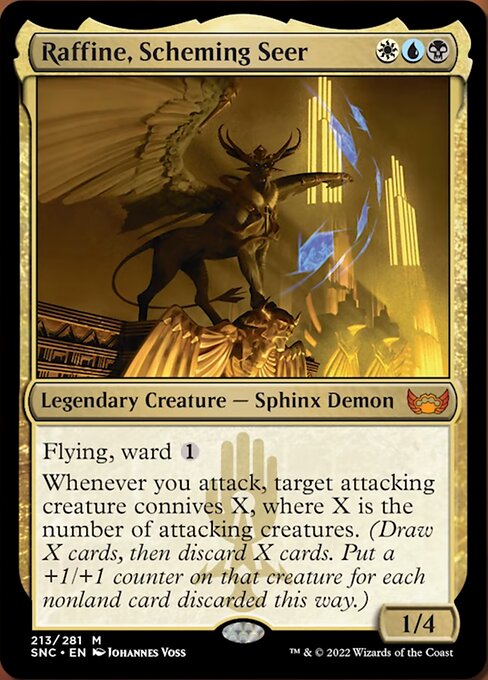 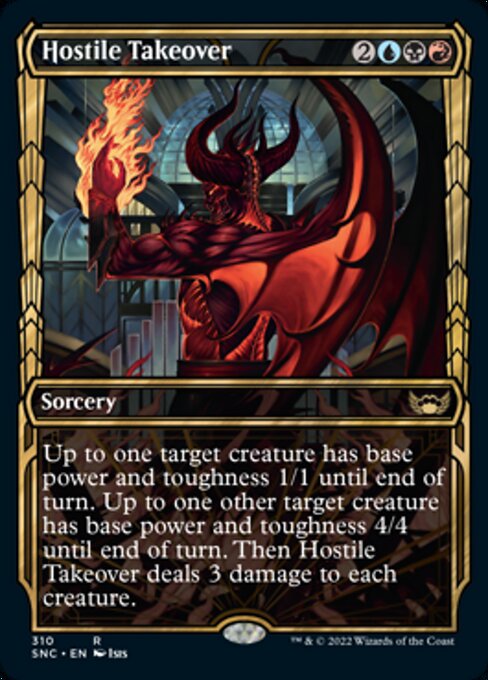 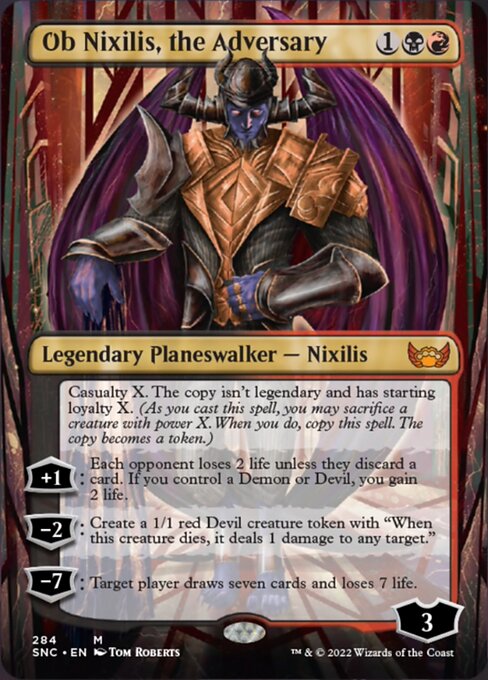 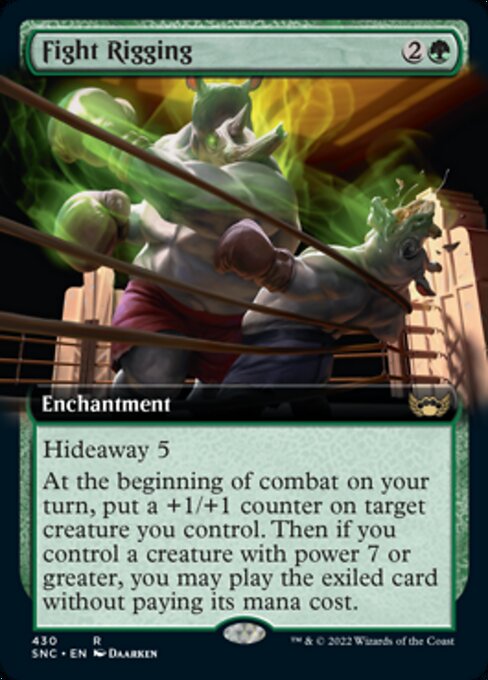 These are the real reasons to splash. Sometimes you see a card that is just too good to pass. Maybe you first picked it and those colors weren't open. Either way, there will be games decided by the power level of this singular card. In SNC this often means that we're splashing the second or third color of a gold card. The mono-colored Fight Rigging or Rabble Rousing also fit this description. There is a very simple reason to play these cards. They win games.

While building a strong, stream-lined blue-white deck, I opened a Raffine, Scheming Seer. It can be beneficial to speculate on fixing even before you open or are passed a bomb and here I was rewarded. Playing two swamps is a real cost, as are the tapped lands, but when my final match ended from an opponent scooping to a turn-five Raffine, it was clear it was worth it.

You should always try to include a Soul of Emancipation or a Lord Xander, the Collector when it is feasible. The more reliable your mana is, the wider the range of cards you can justify including. Here, I didn't love playing the two swamps but Raffine was worth it. However, I did not feel that my Nimble Larcenist was worth either a.) increasing the black mana in my deck or b.) the risk of it being a dead card in my hand. As a result, that Obscura three drop stayed in the sideboard.

This deck doesn't have the power level of the Raffine deck in its base colors. This deck contains a lot of middling cards. Civil Servants and Elegant Entourage, though good, didn't feel as though they were strong enough to consistently win. I needed to expand my options to build a formidable game plan. This deck is splashing two powerful threats, a removal spell, and a pair of Spara's Adjudicators. Falco Spara, Pactweaver and Psychic Pickpocket are difference makers and this deck needed exactly that. To execute this game plan, I needed more fixing than the UW deck listed above. The six non-basics and the two Spara's Adjudicators help reliably cast the off-colored cards.

Sidenote: The Adjudicator is a surprisingly powerful card. It has the fourth-highest winning percentage amongst multicolored commons. Though that data might be clouded by the winning percentage within those colors. In my experience, blanking both halves of combat for a single creature can be very potent in a format defined by racing.

When building this Green-Black deck, I speculated on some Riveteers dual-lands. I anticipated a need for the gold cards split between these two colors. They were left in the sideboard because the card quality was so high. I didn't want or need to dilute my mana. Forge Boss and Riveteers Charm are fine cards, but I decided they weren't worth it. Fumbling with tapped lands or unnecessary red sources are unnecessary risks in this deck. My plan was powerful and consistent. A third color may have raised the power level of the deck, but the reward was too low to justify the risk.

Multi-colored piles can thrive despite the hostility of the format. This deck looks to play a long game that leverages powerful cards. The slower the game you want to play, the more colors you can get away with. This deck is base-Maestros (URB) but splashing a double white spell in addition to the Inspiring Overseer. It looks to win with massive Rogues' Gallery and Cormela, Glamour Thief card advantage plays.

This deck is running eight non-basics, as well as a Glamorous Outlaw, an Ominous Parcel, and a Big Score to facilitate the messy mana base. Depopulate immediately catches you up when behind, making it a great splash despite requiring double white. However, the deck's infrastructure allows for more ambitious splashes. Beyond the great fixing, this deck has two-drops that specialize in trading off and card advantage to help break stalemates. Sam Black often comments that card draw is the best form of fixing and that proved to be the case here. In most games, I drew nearly all of the deck because of the card advantage.

We shouldn't aspire to build decks like this (as the unshared portion of my 17lands data would indicate). But sometimes it is correct. When we prioritize fixing we open ourselves up to opportunities. I still want to be in a two-color, proactive deck, but we don't get to cherry-pick our decks. We build them, somewhat in the dark, one piece at a time. The messier the splash, the more we need to consider our ability to play from behind. Wraths like Depopulate, Hostile Takeover, and Incandescent Aria are all ideal splashes. Decks that are built to splash want to interact early before taking over. They are usually controlling and powerful.

No Running on Deck

Another reason we might splash, despite fielding a powerful and consistent pool of cards, is that we need access to a specific effect. If you built an aggressive BR deck that lacks removal it's possible you end up stone-walled by some sequences of plays. A light green splash could enable Bouncer's Beatdown or Prizefight. A blue splash could enable Tainted Indulgence. And, while in a vacuum, I would prefer not to make those splashes, there are times when access to those effects can warp the trajectory of a deck in a positive way. Similarly, if I have a couple of game-breaking creatures, I'm more inclined to consider Dig Up the Body as a potential splash.

The other half of this equation is identifying what our deck doesn't want. An aggressive deck is less inclined to splash because slowing down a proactive assault is rarely worth the uptick in power.

This format pulls us in two very different directions. It's a tempo-driven format where many games end in a race. Therefore, we shouldn't want to splash. Conversely, the format is also built around three color families and there is a ton of common fixing. Fixing and powerful gold cards encourage splashing. So when is it worth it?

I ask myself the following questions when considering a splash:

1.) Am I happy playing this spell late in the game? An off-color card can't realistically be expected to come down on curve. If I unlock this card in the late game, the payoff needs to be worth it.

2.) What does inconsistent mana do to my deck? I have very little interest in splashing if my game plan is built around aggression and curving out. In situations like these, even a game-breaking bomb might be left on the cutting room floor.

3.) What kind of fixing do I have? Fixing reduces the risk of playing a splash. If I'm just jamming three islands in a deck and hoping to get lucky, the value of the splash is probably irrelevant. Conversely, if I have the fixing I may splash less powerful cards.

Like all things in Magic, there aren't hard and fast rules when it comes to splashing. I generally advise caution when splashing, especially in an aggressive format. Fortunately, the fixing in SNC is great, and it's easy to speculate on a few nonbasics. Your rewards will be greater if you're actively reducing your risks and this format gives you plenty of opportunities to do that.