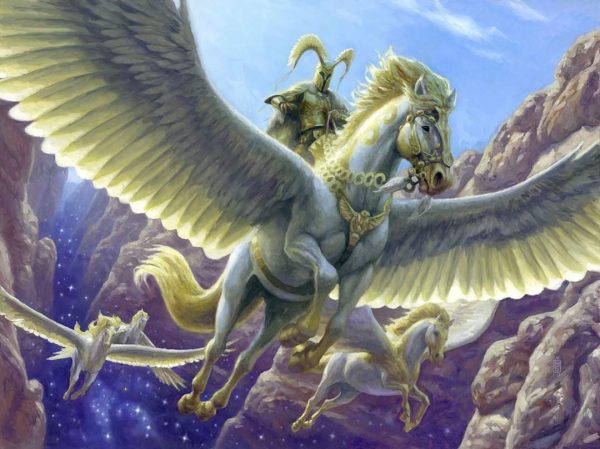 In Arena's brief return to Theros Beyond Death (THB), I opened pack one, pick one Archon of Sun's Grace. It was an easy first pick. The Archon is one of the format's most powerful bombs. It demands an immediate answer. It's evasive, and difficult to race. If you're ever triggering its ability the value feels insurmountable. When pack two came around, I was offered the following selection:

The best card here is Iroas's Blessing, a premium removal spell that can also trigger constellation. A case could be made for Thirst for Meaning as well. However, nothing in this pack matches the power of the first pick Archon. So I took the third best card in the pack, Transcendent Envoy, instead. Two drops are important, so having one in the color I'm committed to is nice. It's an enchantment and it has an ability that helps trigger constellation. I'm cutting white (although the Archon of Falling Stars is fine), which will theoretically help in pack two. In short, I first-picked a bomb and was going to do whatever I could to play it.

I was recently at a longevity celebration for a certain organization of which I'm a member. During that ceremony, the keynote speaker referenced a study that identified why people stay in their careers as long as they do. The number one reason, or so he said, is "inertia". This inertia keeps people on their various paths in a few ways. It's familiar, and there is comfort in familiarity. It's also easy to continue to do the thing(s) we do, we don't need to change or challenge ourselves. Change can also bring conflict, and people tend to avoid conflict. Personally, dear reader, I found the whole speech uninspiring.

At various points in our lives, we face forks in the road. Do we continue following the path we are on or do we change course? These can be some of the biggest decisions we ever face and they should not be taken lightly.

Although not quite as life-changing, we often face similar crossroads in a draft. We select a first pick we like, then we put the blinders on, following it up with cards that match its color, and hopefully align with its strategy. In his formative essay on Limited, Ben Stark calls this "Drafting the Easy Way". In general, we want to avoid this mindset. We want to stay open and continue collecting data with each pick because having access to an open color will be more valuable than the single bomb we started with.

Fortunately for us, the data is not stagnant. Every selection provides more information. In this draft, my next two picks were red cards. Red was open, but I fought to play the bomb.

In the previous Arena cube, I found that the Archon of Sun's Grace was nearly as strong as it was in THB. Whenever I saw it come down, it was often followed by multiple triggers, creating a board state I couldn't beat. Fortunately, I opened Archon there as well (must be nice). After taking the Archon in the cube I was faced with this selection.

I selected Junk Winder with my second pick here. This gave me two viable pathways to move through the draft. This pick was far less of a declaration than taking the Transcendent Envoy in THB.

It's easy to end up with a bad deck and feel discouraged about staying flexible, but the surge of excitement we get from our first pick might not be worth pursuing. This deck was not great. Junk Winder impressed but in general, this midrange pile was pretty middling.

In THB, Archon almost guarantees a solid finish on its own. That's not the case here. I had to reach out and that ended up being a messy proposition. One might draw the following conclusion: When I stick with my first pick, I do better than when I pivot off of it. To which I would respond: that's probably true.

When we draft the easy way (namely, supporting your first pick with a well-built shell around it) it's because we can. We see cards that go with the first pick and so we take them. Things get more difficult when they must. When the options that go with our first pick aren't as powerful as those that diverge from them, we are forced to make difficult decisions. To be a good drafter, those decisions must be made.

The Limitations of Inertia

Here's a great example of needing to pivot: I first picked Concealing Curtains // Revealing Eye, which is a reasonably powerful rare. When I was passed the set's "mythic uncommon", Bloodtithe Harvester I was ready to settle into one of the format's premium archetypes, but the data changed.

Pack three offered me almost nothing in my colors. I rolled the dice on another gold uncommon, Brine Comber // Brinebound Gift, because I was unwilling to lock myself in against this singular but concerning data point. Pack four provided a Traveling Minister to go with the spirit. Pack five made me reconsider the data.

The best card in my pool is the Bloodtithe Harvester. The best card in this pack is probably Kessig Flamebreather. While it is a red card, it doesn't play particularly well with what I have, but I assume if I end up RB then I will want it. The blue uncommons here are fine. I picked the Thirst for Discovery to go with my UW cards. Why? Because of the data.

Not All Data Points Are Created Equally

The deeper we get into each pack, the more information we can glean from the table. In packs three and four, I was seeing strong blue and white cards. This means two and three players, respectively, were passing those cards. The only good red card I had seen so far was pack two and it was a gold card. My opponents were likely any other combination with red, leaving me no reason to stay in that color. Conversely, I kept getting information that blue was available, including two (maybe three) playable cards from this pack.

Drafting the easy way would have been just that, easy. As the expression goes, "easy come, easy go". While I could have committed to the RB cards I picked early, my overall deck would have not been nearly as good as the one I drafted. The draft provided a different opportunity, and I took that opportunity to a 7-2 finish.

The lesson here is that draft offers us signs and signals. We don't want to overreact to a single data point. We want to make sure we're adapting to the information we receive. If we stubbornly commit to the person we are, we may never become the person we are destined to be. Similarly, if we commit to an exciting first pick, we might never know what the table will offer us. If we obstinately clutch our first pick rare and second pick Bloodtithe Harvester, we'd be kicking ourselves as we pass strong card after strong card, finally admitting to ourselves, "we should have been UW", as we struggle to make playables.

There are many roads to success and we need to know how to navigate all of them. I might be punished for diverging from a good start, but that realization should not be seen as a sign of defeat. You want to get in the habit of making picks that will optimize your results long-term, rather than desperately lunging towards the path of least resistance. Remember that even your best cards are going to be less effective if you're in a bad position. The open lane will provide more opportunities for you to be in a good situation.

No one wants to abandon their first pick because we can never truly know what the future holds. But there are clues! Read the draft. Ensure that you're measuring the likelihood of future outcomes based on new evidence. Sometimes we toss away a bomb in pack one only to be passed several more in packs two and three. You are more than a victim of inertia, and your drafts should be too.