In part one of this series, I shared my foray into collectibles, starting with baseball cards and eventually ending up a casual Magic player. Today I'll continue the story and consider the lessons learned collecting in and beyond college. 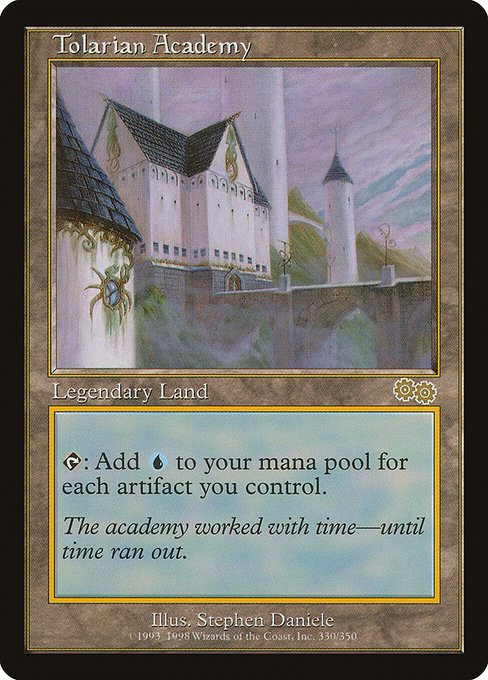 There were no game stores anywhere close to my university, which nowadays seems unthinkable, but at the time it forced me to pull away from the hobby I had loved for so long. However, my freshman year, I did look to see if I could find any other Magic players on a local forum.

I met up with one guy who had a full Ravager Affinity deck built, and he stomped most of the casual decks I had made. All of them except one: I had fallen in love with Tolarian Academy after reading just how broken the archetype was, and built an insanely powerful deck utilizing Windfall, Stroke of Genius, Mind Over Matter, and a lot of artifacts. I enjoyed winning every game on turn 1, and he had never seen most of those cards before. The fun I had in those games kept me from selling any of my cards during this break, and when the siren again, I answered with a vengeance. 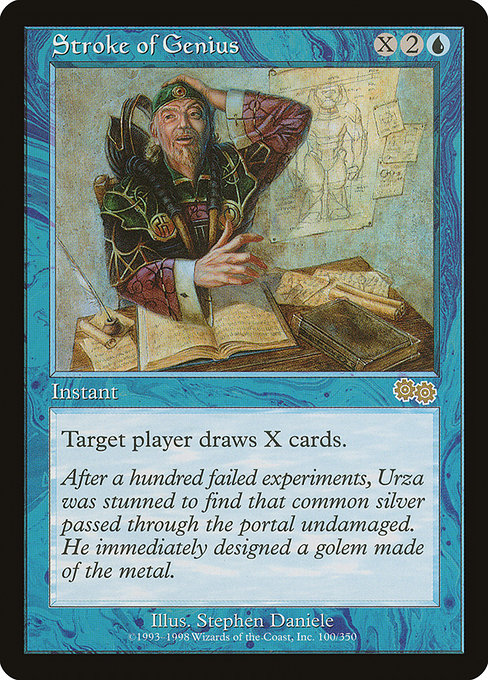 The summer before my last semester, I had a medical issue that required a week-long hospital stay. I was not used to being cooped up in a bed, and began looking for something to stimulate my brain. Sadly, this was in the days before hospitals had wifi available, and I quickly got bored playing single-player Diablo 2. That is when I remembered my old Magic collection and had my parents bring me my cards.

I spent the remainder of my stay building decks and playing against my brother when he came to visit. The current standard block was Lorwyn, and I opened a pack with a planeswalker, a card type I had never seen before. 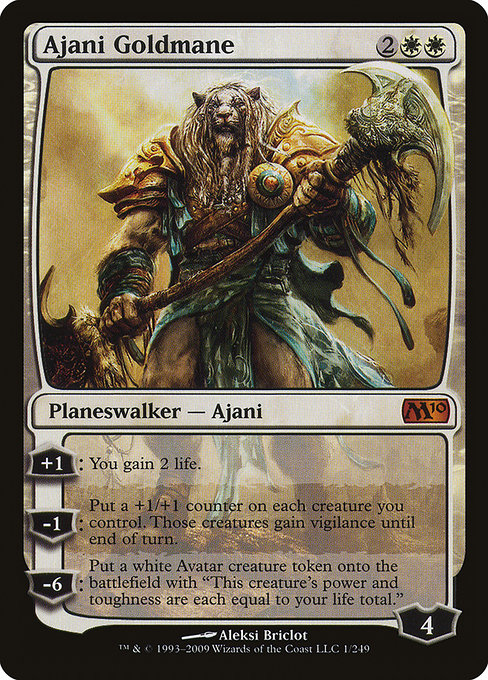 Lesson learned : when times get dark and stressful, having a hobby you love to fall back on is invaluable.

After graduation, I was able to land my dream job. However, it required I move to Baltimore, far from my friends and family. I was excited for this fresh start, but also aware that I was no social butterfly, and many evenings were spent cooking dinner and watching TV.

Fortunately, the company I worked for happened to have an internal forum for coworkers to discuss hobbies, so I asked around for fellow Magic players and met a coworker at a local game store (Games and Stuff in Glen Burnie, MD). We played in a Shards of Alara draft and quickly became good friends.

Lesson learned: making new friends is a lot easier when you share a hobby. 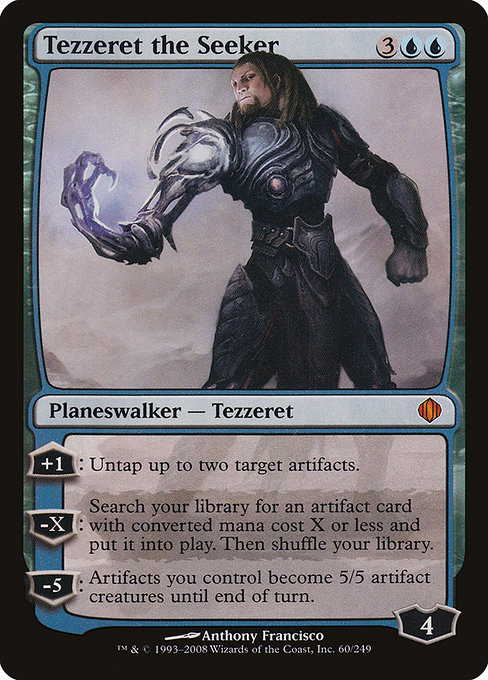 It was during this time that I was introduced to EDH (the format now called Commander) and learned it was my preferred format to play. I began buying cards I thought might be powerful in the format or ones I wanted for specific decks. Prior to this revelation, I had almost always bought packs and traded their contents for cards I wanted, which obviously meant I acquired cards pretty inefficiently.

Lesson learned: when you want something specific, just buy it.

Most of the EDH games I played at this time were with a small group of likeminded casual players. We would play at our LGS until they closed, and then moved the games to a Denny's that wasn't too far away until we were ready to call it quits for the night.

Other players watched us, and interest in the format grew, which isn't surprising given that UB Faeries was dominating Standard deck and many found it abysmal to play against. This growth led the store to start an EDH tournament, which of course brought in some more competitive players. I wanted to give them a run for the money, so I built a one-trick pony Maralen of the Mornsong combo deck and took down the tournament. I don't even remember what the prize was, but I do remember that I didn't really enjoy playing the deck and I took it apart after the tournament. 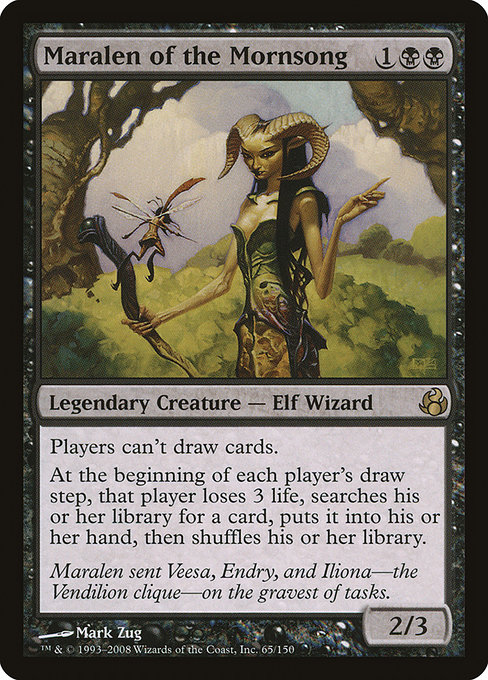 Lesson learned: play what you love, be that competitively or not.

Sadly, I graduated smack-dab in the middle of "The Great Recession" and my dream job evaporated along with the jobs of 500+ of my coworkers. It could have easily been an opportunity for me to fall into depression, but I had my trusty cards and friends, and we kept playing right up until I moved back home to look for a new job.

I was able to land a position at a company I had interned at for several summers, and there was a card store about 40 minutes away. I made my way there and ended up meeting two brothers who ended up being best men in my wedding and whom I still hang out with as often as possible. Magic had once again brought me new friendships and kept my spirits high.

It was also at this time that I began to find enjoyment in competitive Standard. This was before Cawblade had caught on big, and the format was still pretty wide open. I built a very powerful Mono-Green Elves deck that utilized Copperhorn Scout, Elvish Archdruid, and Ezuri, Renegade Leader to flood the board with elves and kill my opponents on turn 4 or 5 consistently.

Lesson learned: playstyles and enjoyment can change, so don't be afraid to branch out and try new things. 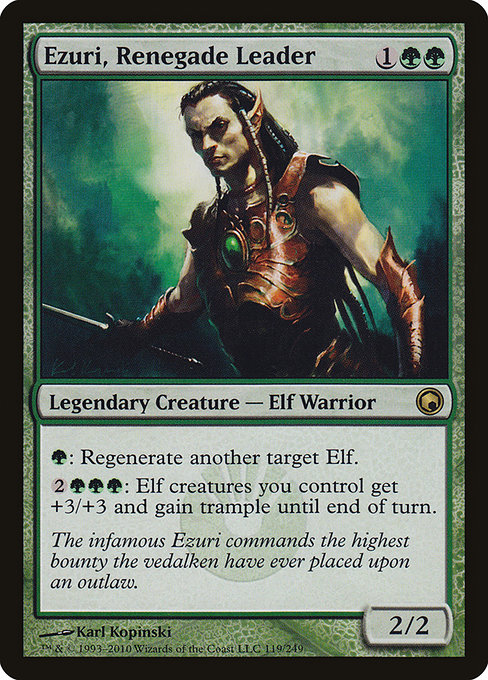 Thus concludes my Life Lessons on Collectibles series... psych! Stay tuned for my wrap-up next time. Until then, I hope you enjoyed taking this stroll down memory lane with me. What are your Magic stories? And the most valuable lessons you've learned along the way? Let us know in the comments!