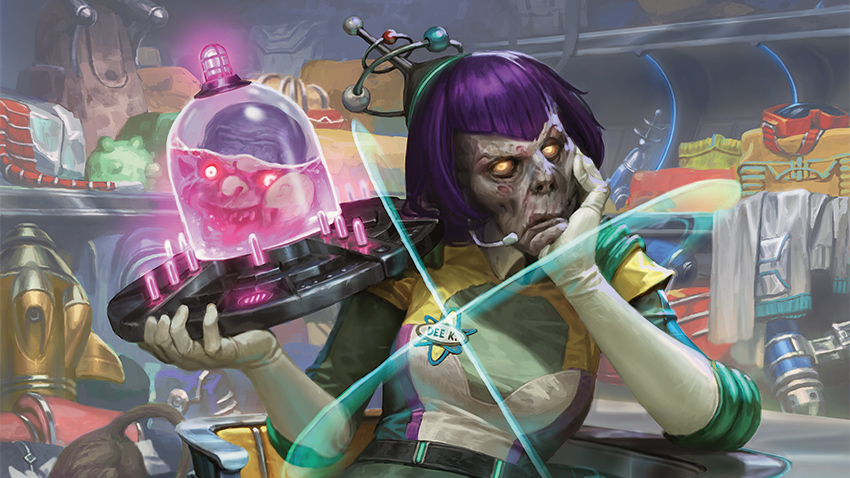 I assume there are many people who enjoy the rampant silliness of the Un-sets. Perhaps it's the abundant references to squirrels, the mechanics referring to non-traditional card text, or the full-art lands? Whatever the reason, people seem drawn to this product in droves voluminous enough to necessitate the fourth (fifth if you count Unsanctioned) installment of Magic's equivalent to open mic night at The Laugh Factory. Regardless, I am not one of them.

However, as a Limited correspondent this format still falls under my jurisdiction. When it comes to Limited formats, I play to win. If you are looking for a day of laughter and merriment, goofing around playing Unfinity, I encourage you to look elsewhere. If you're looking to win your prerelease, then you are in the right place.

Unfinity brings with it some new mechanics, as well as a focus on card elements that usually fall outside the scope of most Magic: the Gathering rules. This includes the names, art, and artists associated with various cards. 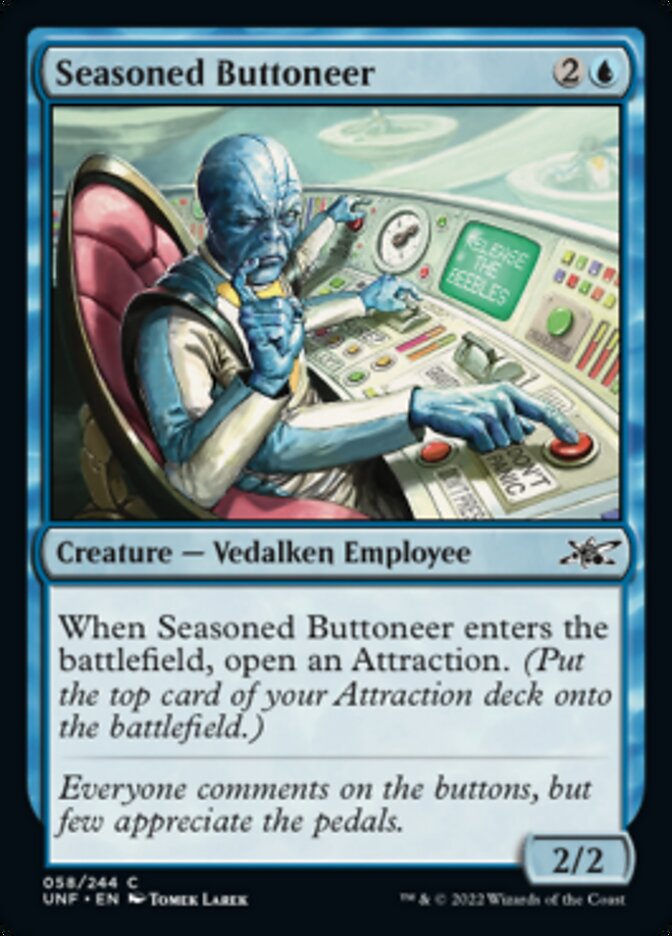 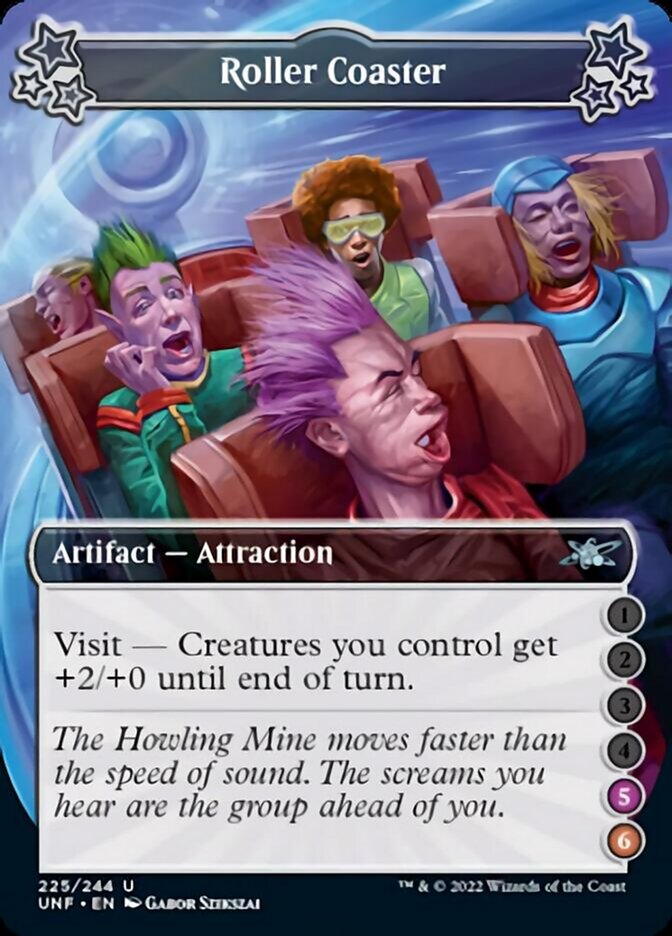 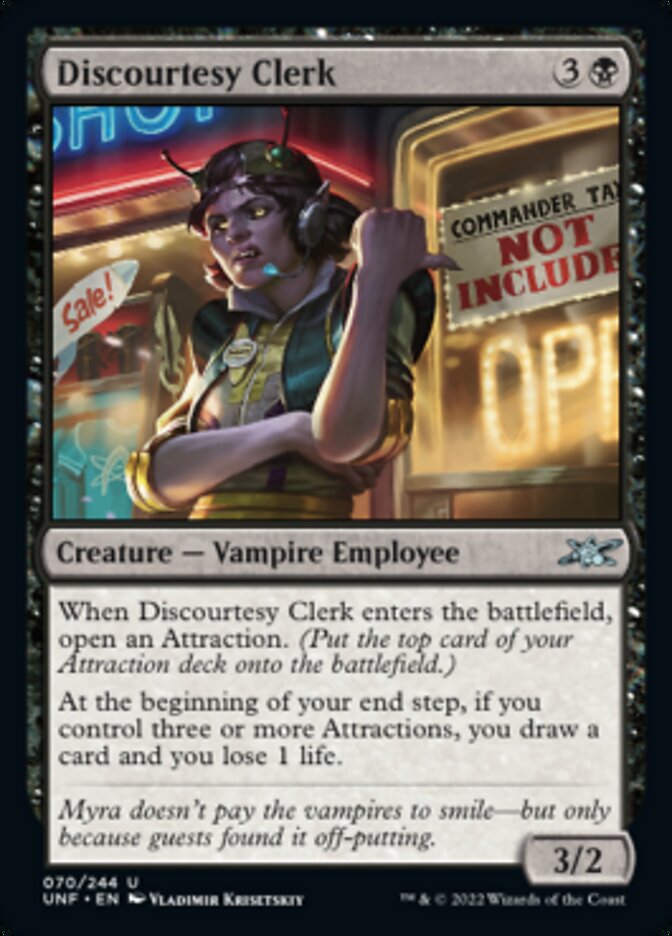 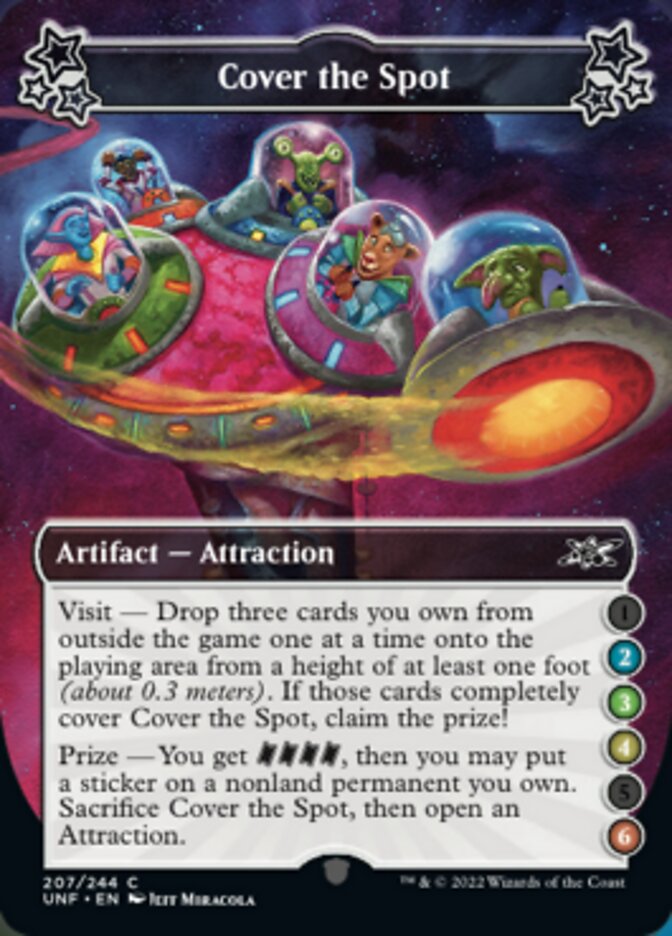 Much like Contraptions in Unstable, Attraction cards reside in a separate deck that is played from the command zone. You don't draw from this deck, nor do the cards go to your hand. Rather, when a specific card, like "Lifetime" Pass Holder, causes you to open an Attraction, you flip the top card from this deck onto the battlefield. Attractions are artifact permanents with the subtype Attraction.

Also, when destroyed these cards go to the junkyard, which is its own separate graveyard, just like the scrapyard for Contraptions in Unstable. 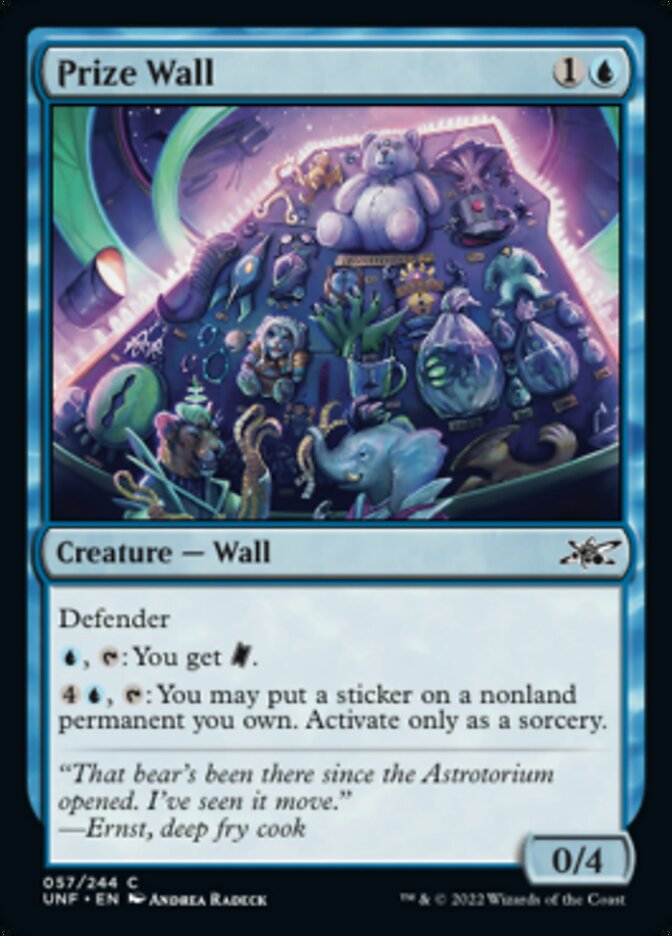 Essentially, stickers are like counters you place on cards, that remain on the card when it switches to certain zones. You place a sticker on a card when a spell or ability tells you to do so. There are four types of stickers.

Stickers remain on a card if it goes to any zone where information is public. This includes the battlefield, graveyard, exile, or the stack. Conversely, if the card goes to the library or a player's hand, the sticker is removed and returned to the sticker sheet, where it can be used again.

Tickets are a kind of counter that players can receive. The ticket-sticker economy has been compared to the Energy mechanic. We amass tickets and can eventually spend them on in-game resources, in this case, more powerful stickers. 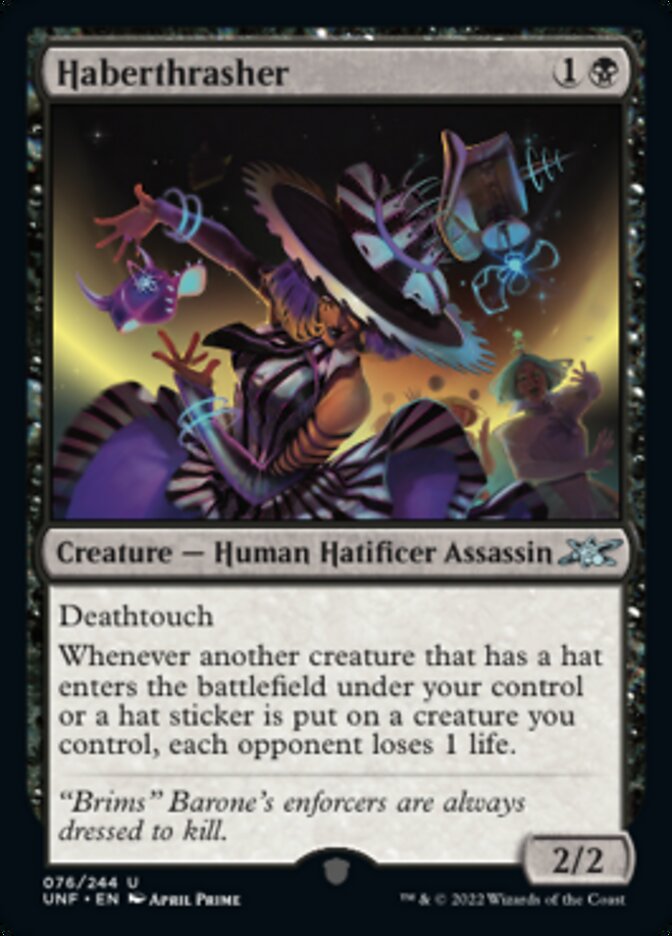 Okay, so cards with hats in the art interact differently with some spells. There's no real rule or reason for this, but it happens. You also probably should wear a hat to this event. Maybe multiple for the best possible outcome. Again, just be aware of this.

You should also choose to wear as much Magic the Gathering paraphernalia as you own and a top sporting all five colors of mana. You should also go with a friend, who you can call on for all of the effects that refer to a person who is not in the game. Bring in a ringer for cards like Rock Star, Autograph Book, Gobsmacked, and a few others. You want to be facing multiple mirrors, and can probably bring one. It also might be good to know where the fire extinguisher in the building is, you know, for unmergencies. As irrelevant as these things might sound, in Unfinity, they can potentially give you an edge. 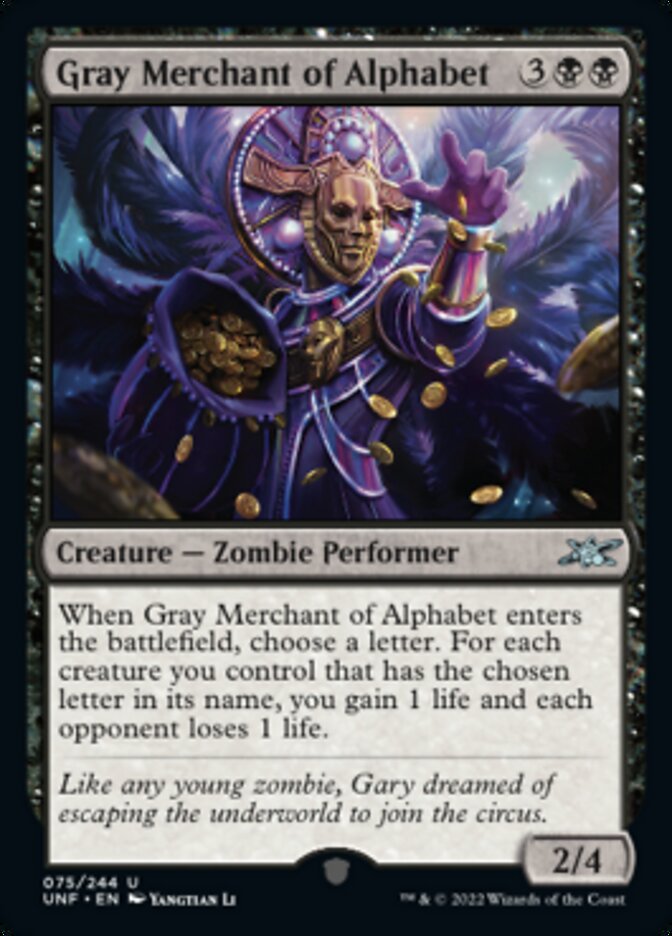 Words and the spelling thereof will also impact the effect of some cards. Occasionally cards will receive a benefit because of the number of vowels in their names or maybe alliteration, or multi-syllabic words. It's legal space for ruling in the world of Unfinity, but the best thing you can do is choose longer words when you can. The longer a word, the more powerful it will typically be during gameplay.

The format's fixing does a nice job of setting up for value in the late game, which is exactly what the slower decks of the format want to be doing. Both Coming Attraction and Ticket Turbotubes help us cast more expensive and powerful spells while providing boosts of value the longer the game lasts. These are powerful draws to your pool and encourage a strong late game.

Both stickers and Attractions represent resources that we want to stack. The more tickets we have, the stronger the abilities we can generate from them. The most powerful ability stickers cost the most tickets. Similarly, a number of cards in the format benefit from stickers being placed on the permanents we control. If we lean into this mechanic there are synergies we can capitalize on. Stiltstrider seems like a very powerful five-drop, but many of the uncommons really push the mechanic.

However, the most attractive option is the Attractions themselves. Since we roll one die for all the attractions, the more attractions we have open, the more potent those die rolls are. While there is always inherent variance to rolling dice, we can stack the odds in our favor with multiple attractions. This archetype appears to be the most powerful in the format. Additionally, cards like Bamboozling Beeble and Line Cutter seem like staples in this deck, which theoretically looks to play a longer, more controlling game. If each turn we net small advantages, our advantage grows the longer the game lasts.

Speed of the Format

Much like in Dominaria United, the lack of two-drops at common will reduce the potency of aggressive decks. At uncommon, cards like Lineprancers, Haberthrasher, and Knight in ______ Armor should do a better job of pressuring opponents. The best aggressive deck will be the stickers deck, headlined by common two-drops Minotaur de Force and Chicken Troupe. Cards like A Good Day to Pie and Unlawful Entry can provide reusable evasion. Unfortunately, these cards are spread over four different colors, though red is the most aggressive with the highest number of cheap threats.

Sealed decks, however, play with a less focused approach than Draft. With all of the mechanics based around accruing value, the safe play in for Sealed prerelease events is to settle into a slower deck. This means that removal spells like Well Done and Disemvowel will be at a premium.

Additionally, two commons jump out as being effective tools against aggressive decks. Eelectrocute is a quick answer on turn two, that can find another use later in the game. Boing! is a basic bounce card, but because stickers fall off when a card is returned to its owner's hand, this instant will disproportionately punish sticker decks more so than any other type. Overall, this set shouldn't be overly aggressive, and you should build your deck to win midrange mirrors and power out wins in the late game.

Outside of rares and mythics, Wicker Picker is probably the number one card we want in our pool. Giving sticker kicker to every creature you play should lead to an insurmountable advantage. This card fits into any deck because it's colorless, and a 2/3 on turn three is pretty decent for the format.

While Unfinity does not represent what I love about Magic: the Gathering, the important thing is that some people will find a great deal of joy in it. Playing the game is fun with very few exceptions and I don't imagine the prerelease will be anything but a good time. Hopefully, this guide helps you, and if not, the good news is that Dominaria United, is still available on Arena.