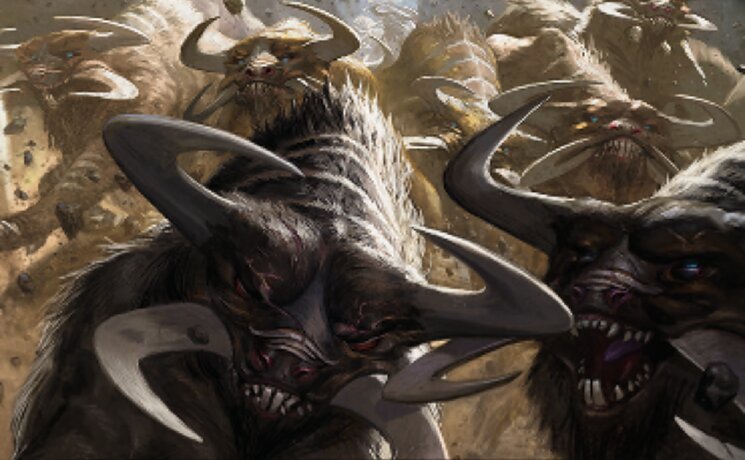 When it comes to Dominaria United (DMU), the number one question is, "when should I take lands?" The number one answer is, "it's context-dependent." This week I'd like to take the opportunity to explain that context.

From the first pick, to whatever we're passed at the end of pack three, we are steering our pool toward the best possible deck we can build. Each pick along that journey asks us to narrow in on a single archetype or to "stay open", taking wider surveillance of our options and delaying the decision before locking in our direction.

After our first few picks, we should either a.) have a good idea of where we're going, or, b.) have outs to be a good deck in one of a few strategies. If we are neither of those things, something has gone wrong. These two possibilities do not represent binary options, but rather two points along a spectrum that helps us evaluate each subsequent pick.

Throughout the draft, we move closer to our deck. By the end, whether we like it or not, we have our deck. Staying open, lets us try to find the "best lane for our seat" evaluating the upside of future cards over the ones we've already seen. We take a more narrow approach as we commit to the deck we're seeing emerge from our picks.

DMU's three pillars, Blue Spells decks, Domain decks, and Creature-Based White decks represent the three likeliest shells we'll end up in. If we're in a Blue Spells deck, we want to stay in Blue Spells. So when we're given a choice between "surveying our options" or solidifying our path, we should lean towards staying the path. To quote Paul Newman and Doug Butabi, "Why go out for a burger, when you got a steak at home?" If I have a Tolarian Terror and an Essence Scatter I'm taking an Impulse over a Wooded Ridgeline.

However, because I have no preference to be a Creature-Based White deck, I'm more inclined to survey my options. If my first picks are Knight of Dawn's Light and Destroy Evil, I'd take the Contaminated Aquifer over Argivian Cavalier. If we deem a deck to be less desirable, we should more aggressively consider other options. Just because we speculate on a dual, doesn't mean we've abandoned our first plan. It does mean, however, that we're considering other options.

Lands represent staying open. They make possibilities more possible. The more dual lands we have access to, the more we can do. We can more reliably activate kicker, or splash more ambitiously.

Even double on-color lands help open up splashing. Every Molten Tributary in my UR deck will provide a source for both blue and red. This means that even with one fewer on-color basic, we have the same amount of access to those two colors. With that extra slot, we might consider playing 16 lands or playing an off-color basic to facilitate a splash. We could even be more conservative and just enjoy our even-safer-than-average mana base. All these options come from selecting a land.

Most often, the lands give us access to kicker. While we want to have a reliable amount of sources for our spells, kicker sometimes feels like a free roll. We can play a Ghitu Amplifier because our Red White Aggro deck needs two-drops, but a couple of copies of Idyllic Beachfront creates more exciting possibilities. Cards like Phyrexian Espionage, Benalish Sleeper, Timely Interference, and many others are solid without kicker, but the ability to upgrade them in the late game is a big deal.

What Lands Do in a Format with Domain

If we first pick a Drag to the Bottom or Herd Migration, we should do our best not to pass dual lands. Those are two of the best cards for the Domain deck, and that deck wants dual lands most of all. When this archetype selects dual lands it is both solidifying its position, by picking up an important piece and staying open, by providing avenues into a central color for the Domain deck, expanding the possibilities of its off-color inclusions, and potentially creating a road map to pivot into another color pair or synergy.

If we have a strong incentive to be a Domain deck, we should only take premium uncommons and critically important commons over duals, until we've reached a reliable arrangement of these lands (seven plus is the dream, but six is reasonable. Five and fewer is dicey, but again, this depends on how important those colors are to our deck's plan.)

Additionally, cards like Shadow Prophecy, Meria's Outrider, and Artillery Blast all have significant upgrades when our deck can account for more than two basic land types. By taking a dual land, we improve the power of these cards in whatever deck we play them in.

Before we select a land, we should consider the following:

All of these questions should play a role in whether or not we're taking a land over the next best option in our pack. So far in this article, we've addressed questions one through four. Question number five is a little more open to interpretation. Archetype and card rankings are always contentious. So to refine our practices, we'll take a look at this theory in action.

The draft started with two reasonably strong cards. Both cards want to play a slower game, and they could lead us toward a Blue White deck leaning toward either color as a pillar, or towards a bigger Domain deck.

Pick three the decision was between the Sunbathing Rootwalla and the land. By taking the land, I'm leaning into the Domain deck, but by passing the Rootwalla, we're losing equity in the most aggressive versions of this deck. The fourth pick faced a similar decision. The land here represents something that would be used on either of the paths we're currently facing. However, we're giving up another payoff for Domain in Nael, Avizoa Aeronaut, and a strong partner for the Rootwalla we just passed in Meria's Outrider. It is going to be hard for us to backdoor into an aggressive Domain deck after this selection. That is real equity that we're giving up

However, the Domain deck needs to have dual lands to function. We could have taken the two-drop and either threat out of pack four, but without the dual lands to support them, we risk them underperforming. Our path was shaky, so we stayed open. By taking lands, we keep our eyes on what is to come in the rest of the draft. If we take the creatures, it's more committal. It forces us to prioritize lands later, as these cards are less effective without a density of duals.

In this situation, I first picked a Drag to the Bottom. I had too much incentive to abandon this plan, so when other options presented themselves, I took dual lands to enable Drag and potentially splash other cards. At this junction, we needed to be a functional Control deck if we were going to be a functional Domain deck. By prioritizing the cheap removal, we left our options open to take those lands later. Of note, the Geothermal Bog would have been the best dual in our pool so far. However, we needed cheap interaction to enable both Silver Scrutiny and Tolarian Terror. While the sweeper is still our best card, we have more important needs.

The final product was a powerful Sultai Control deck, that had five duals (three of which were Haunted Mire). We could not pass up this removal spell for the deck, even though the land would have been nice.

Theory in Action - I Know What I'm Doing

Darigaaz, Shivan Champion is a card that we really want to include in our deck. Seeing a non-basic that helps us cast it is a huge boon for us. While the cards in this pack don't challenge it, we should still take the Geothermal Bog over removal spells or other powerful creatures here. We can't afford to pass up the opportunity to cast our potent five-drop. There is no common I would have taken over the splash land, and very few uncommons.

This deck is less reliant on cheap removal than the deck above. Here we would have passed the Tribute to Urborg given that same choice. The land does so much for us. The removal, while good, does significantly less.

Theory in Action - Preferences and Bias

This pick is almost certainly wrong. Tolarian Terror, Phyrexian Rager, the dual land and potentially multiple white cards were better options. However, at this point in the format, I needed more experience with Red White Aggro. Preferences matter. The path I was going down was one I wanted to be on, so I abandoned the land, and a number of other options, for the Keldon Strike Team. Despite getting seven wins, this pick probably should have been spent elsewhere. The White Creature decks are good when they're open, but at this point in the draft, everything looked open.

Moreover, preferences are likely to change over the course of a format. They differ between players and evolve over time. At that moment, I was on the path I wanted to be and did not want to pass up this signpost staple to test other options.

In this selection, we take the common Take Up the Shield over the on-color dual land Sunlit Marsh. Again, the combat trick is simply too important for the Creature-Based White decks, and that's the path we're headed on. None of the other cards are tempting enough to draw us into another path. The land just is unlikely to do as much as the combat trick on the path we're on.

Every draft pick will always be contextual. Not just because of the amount of data that impacts a given pick, but because we have our own preferences for a given format. In a format as open as DMU, those preferences play a heavy role. In a format where a given archetype has a significant advantage, like White decks in Streets of New Cappena or UB Zombies in Midnight Hunt, those preferences are less important. Every draft is different though, and formats change when exposed to new information, and players generally know what works well for them.

Lands will help give you more options and enhanced reliability. That's not always what you need. There is no quick answer, but if we have a general understanding of where we are, what kind of information we're seeing in each new pack, and what the lands provide for us, we should be able to refine our picks and consistently end up in a strong position.