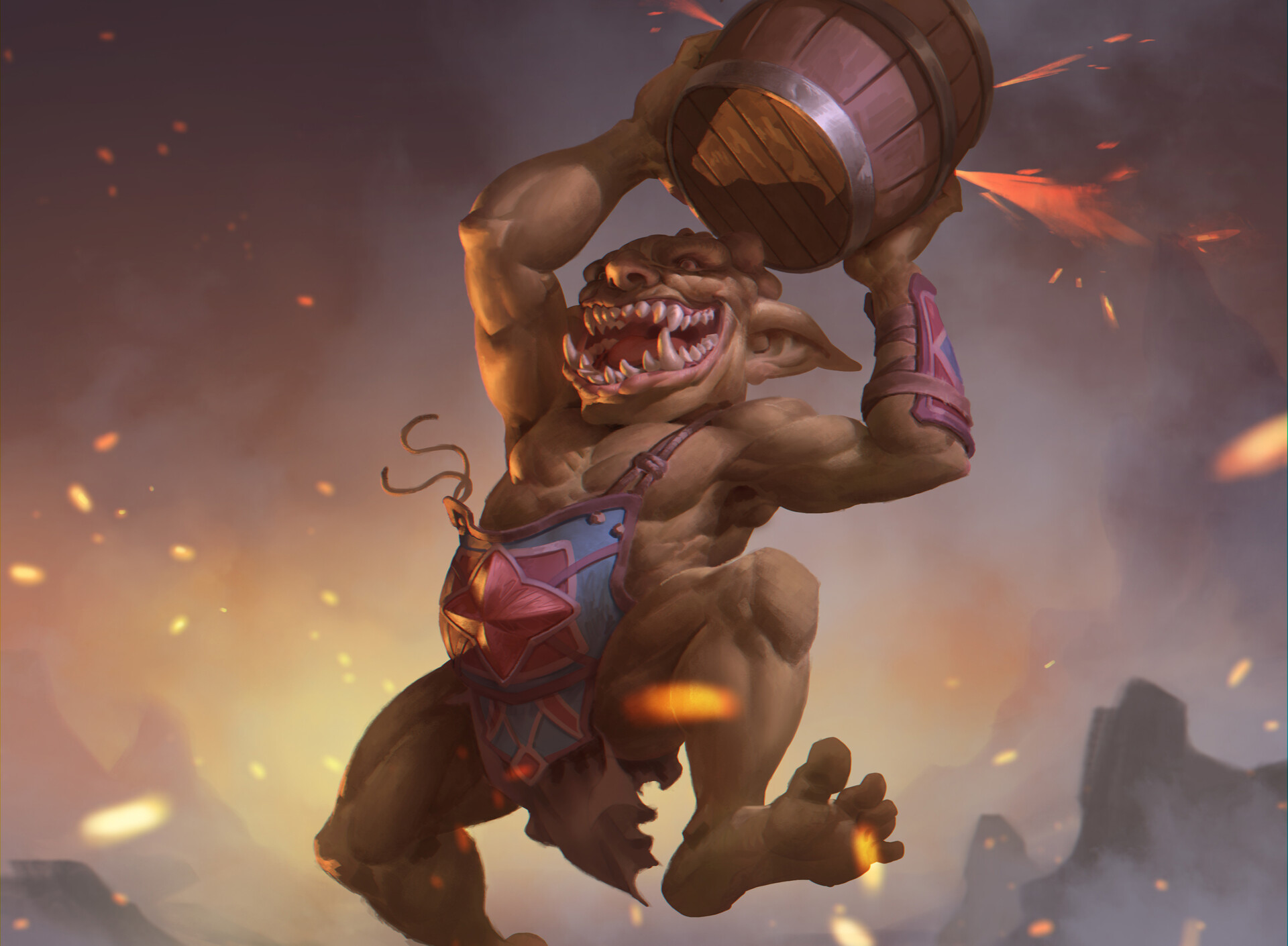 While I never advocate strict pick orders, to illustrate a point I'd like to provide a hyperbolic and nuance-free outline for how I want to start my draft. My priorities for pack 1, pick 1 are as follows:

Bombs and removal mostly speak for themselves. We can include any individual card that performs like a bomb in an archetype that we might be soft-forcing in this category as well. Two weeks ago, we discussed the power of the unearth cards. These two are the best performing, and seeded in the best performing colors. The top cards on this list are likely agreed upon as premium picks, even if individual preferences might rattle the precise order. However, placing these one drops on this lofty perch might come under some scrutiny. This disagreement is the topic I am excited to discuss this week.

What Is The Brothers' War?

The Brother's War (BRO) is, more than anything else, a tempo format. Being on the front foot is very valuable, and even if we're looking to establish an attrition-based game plan, we don't want to fall too far behind our aggressors. Gaining an early advantage on the battlefield, be it a mana advantage, pressure advantage, or otherwise, leads to a good amount of wins. While a wide range of decks are viable, most of my trophy wins come from being red or white-based aggro.

If our goal is to draft for free, then we want to hit certain thresholds. We want to win four-five games in our Arena Premier Drafts. We want to win two or three matches at our FNMs (though due to changes in prize support, this dream may be dead at some local game shops).

While I enjoy my Elsewhere Flask/Corrupt decks, red and white-based aggro pays the bills. 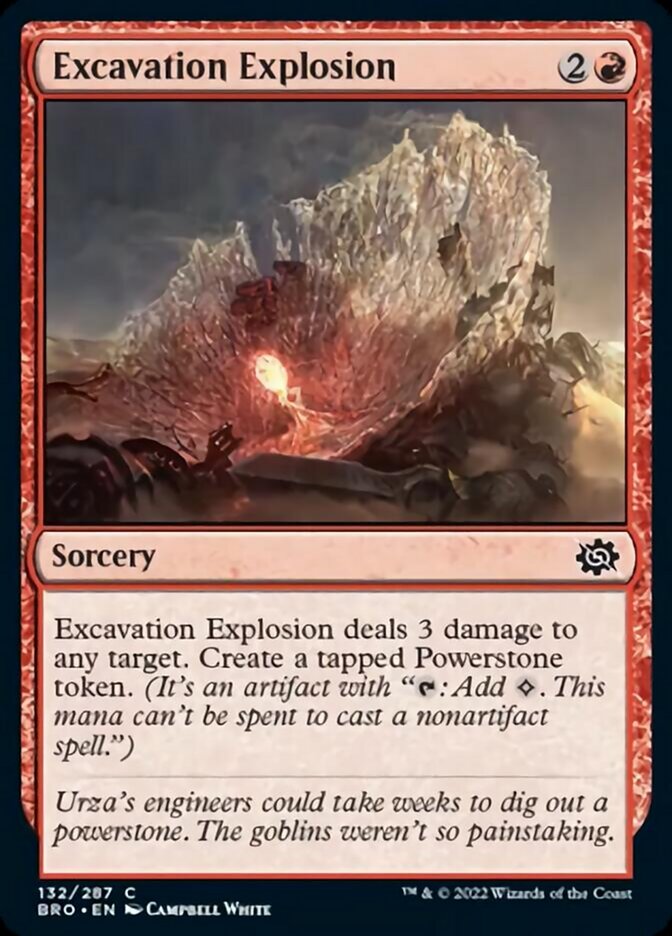 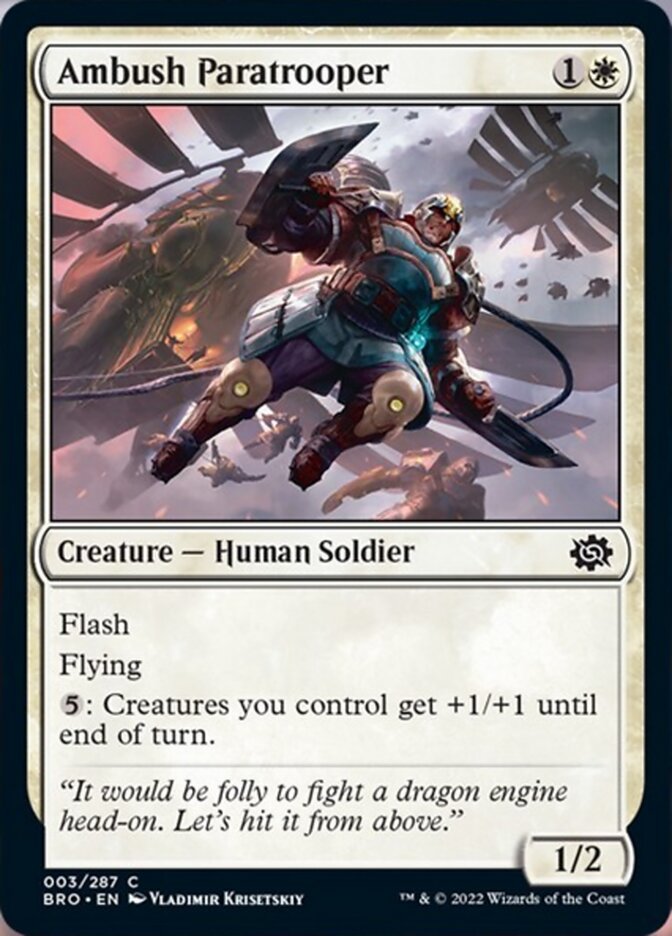 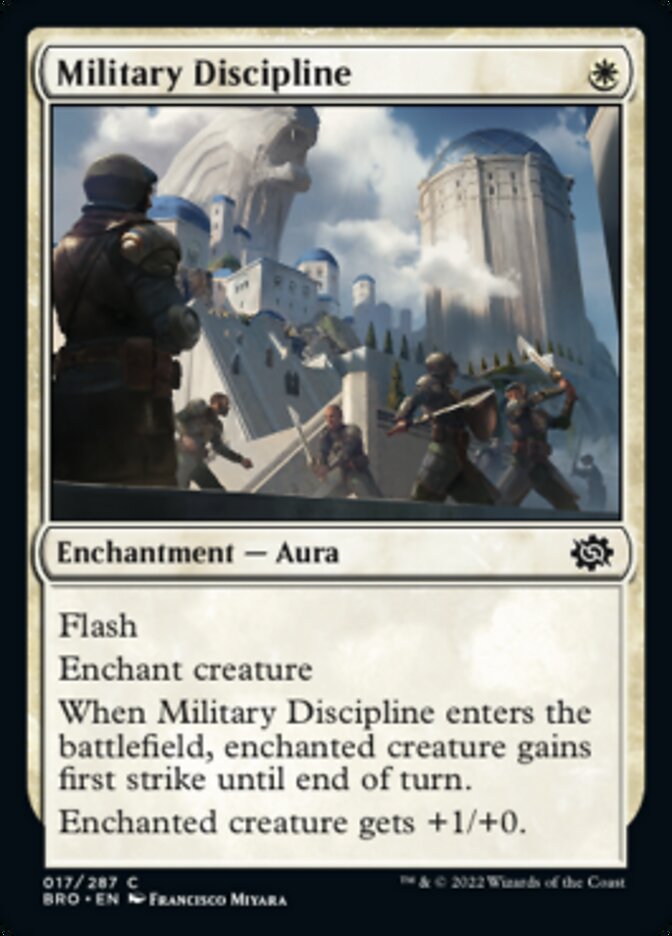 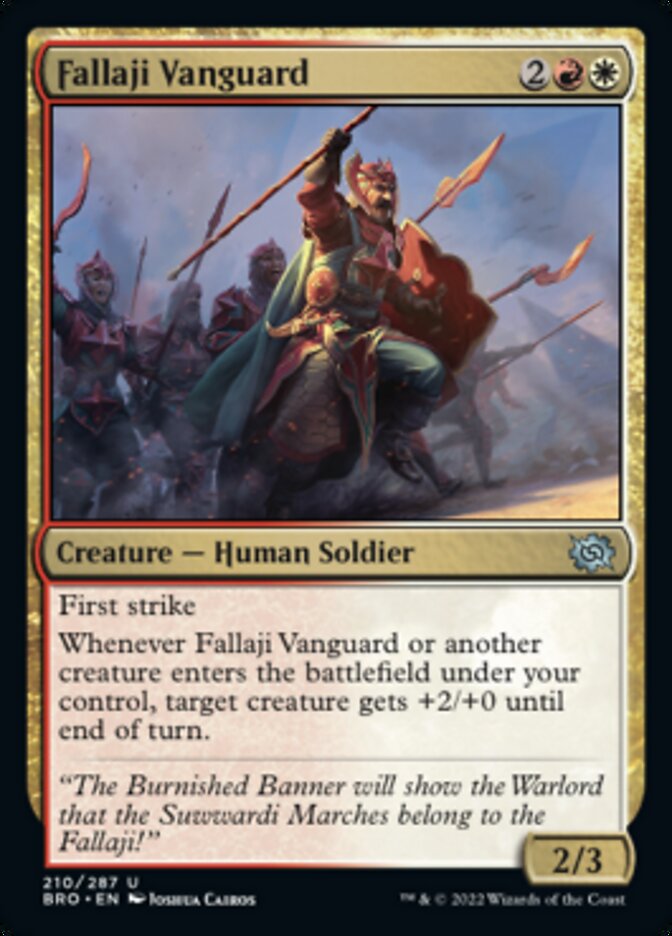 There are a lot of cards in this color pair that are on a consistent, creature-based, aggressive plan. As a result, it's feasible to pilot aggressive decks to profit without hitting the lottery on rares and mythics. 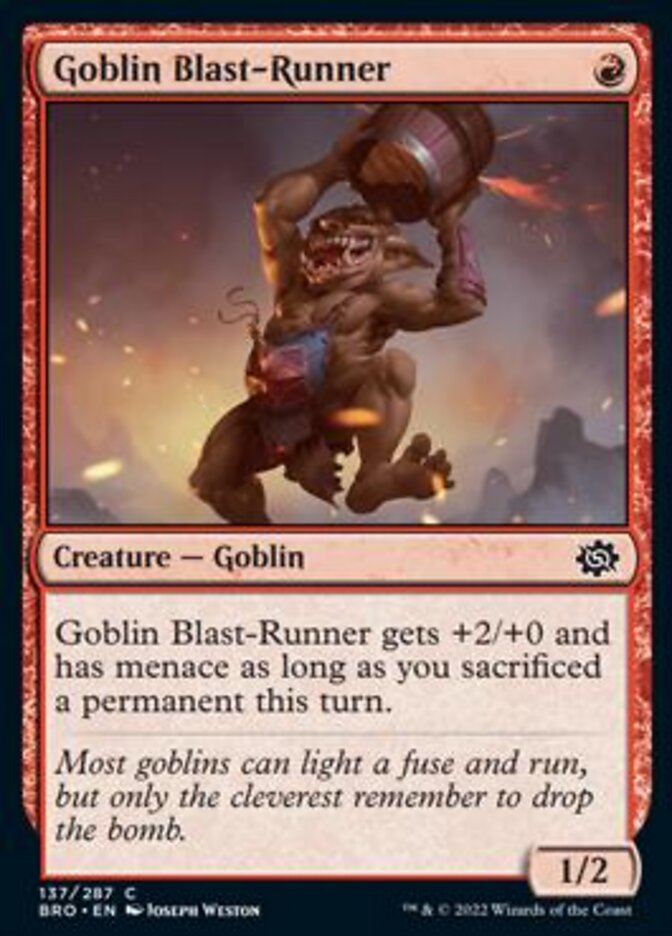 This card hits early and often. Being able to peck in for a few points of damage on a clear board is nice, but once we start cracking Evolving Wilds and Retro Artifacts, the damage gets very threatening, very quickly.

That, however, is not the reason why it is such a high pick for me. The real reason we want to prioritize the goblin is that I want as many as I can get. This one drop represents a plan. The more copies of Blast-Runner, we have, the more consistent that plan becomes. In short, decks that want one Goblin Blast-Runner actually want three or more. Red Aggro is a real deck. It can be built in many ways. Blast-Runner Aggro is a very powerful version of the deck that leans on a few synergies, hopefully in multiples.

Bitter Reunion is the best friend of our one-drop goblin. It lets us pitch lands in search of more goblins, and when we find them, we can give them haste, menace, and more power as we sacrifice the enchantment. When playing Blast-Runner Aggro, we want as many copies of these cards as we can get. Reunion not only fuels our hand but can let us make up the tempo in future turns. Best of all, the more of each, the lower the land count we can play. If we can round out our deck with Penregon Strongbulls, Scrap Mutts, and some curve topping Unleash Shell, we have a solid, threatening plan.

When We Fail to Plan, We Plan to Fail

Goblin Blast-Runner is a card we need to build around. A one-mana 1/2 is not worth a draw step. However, as we begin piecing together our deck, we want to make sure we have Blast Fodder if we're looking to play this creature. We prioritize it because it's an essential part of a plan. It is not, however, an objectively strong piece of any red deck.

As we're drafting red decks we want to take the objectively powerful cards, but the more Goblin Blast-Runners we have, the more supporting pieces we want. We should consider what our deck could look like at the end of the draft. If we have these pieces early enough, it makes it easier to commit to those directions. We can be a good red deck without these synergies. I think we can be a better red deck with these synergies.

Last week, I expressed some skepticism about this little mana dork. That doubt quickly dissipated after watching Sam Black and chord_o_calls stream. Both players used Citanul Stalwart often and to great success. The card is very real. 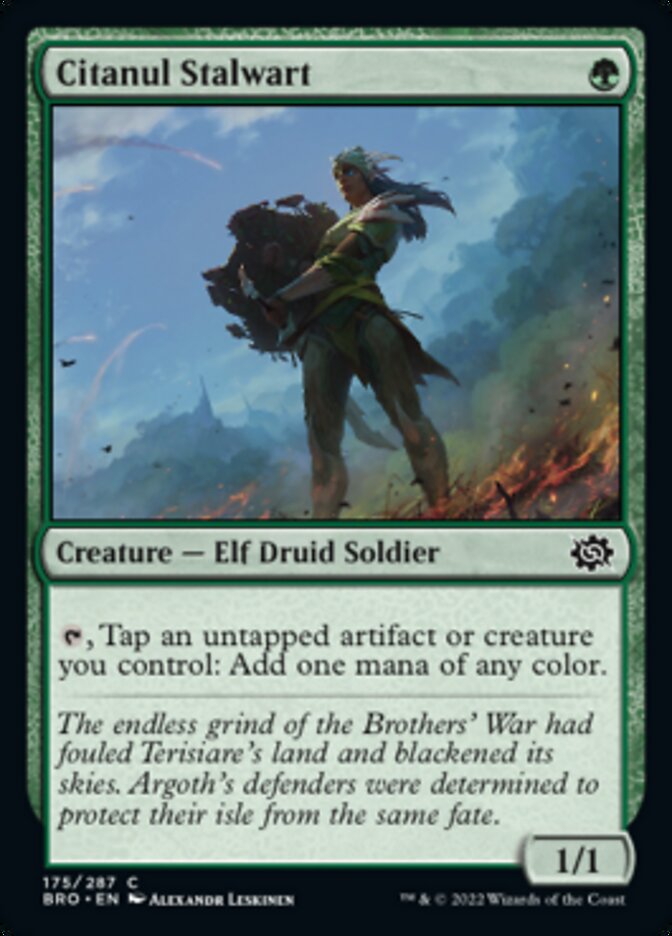 Citanul Stalwart occupies a similar space as Goblin Blast-Runner in that, when we want one, we want many. It is a tent pole of an entire archetype. In some instances, it might remind old-school Modern players of Affinity decks. The Stalwarts let us empty our hands quickly, playing similarly to Springleaf Drum.

Sidenote: Springleaf Drum can, coincidentally, fill in for your third or fourth Stalwart. However, one of the valuable aspects of the Stalwart is that it can tap your artifacts, especially Powerstones for colored mana. The Drum is not nearly as flexible.

Citanul Stalwart lets us play a five-color green deck that can access some of the format's most powerful spells. It lets you splash the unearth cost of any of the creatures we happen to draft, and it can splash bomb rares as well. Because we can ramp as early as turn two, we can often put enough material on the board to slow down our opponents until we're able to value them out. Stalwart allows for a flexible shell and can use what the table is giving us. However, there are some cards we need to maximize it.

Cheap cards like Goblin Firebomb help us activate our Stalwarts to ramp out early Boulderbranch Golem. While this deck could have used a little more top-end, it functioned smoothly on fourteen lands.

Once we've collected at least three Citanul Stalwarts, supplemented by some combination of Energy Refractor and Evolving Wilds, we really have carte blanche to do as we want. We can play a soldier package or use high-quality red cards. We can splash bombs. Whatever the table provides, we can facilitate. This is because, in this specific format, Citanul Stalwart is basically Birds of Paradise (some assembly required). Here's the caveat though: it doesn't work with just one Citanul Stalwart.

The biggest reason why we should prioritize these creatures is that they are cards that we want in multiple. They represent a plan. When we move through the draft, we're often times looking for a plan or balancing multiple at once. Some cards offer us inroads to better plans. Sometimes we see valuable pieces that might enhance whatever plan can support their inclusion. While we shouldn't overlook superior options, the case for these two is as follows:

While you may disagree with the list at the top of the article (perhaps for good reason), if you find that your decks are lacking a clear plan, prioritizing these two cards might be the direction you need in this format.

This week, we're going to shine a little light, on my new favorite card in the format. 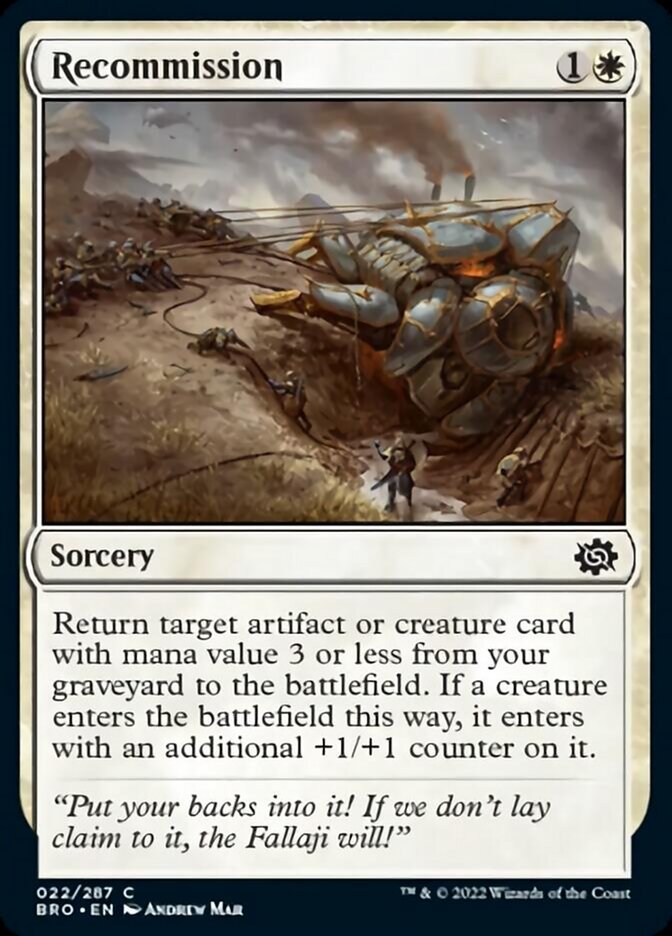 There is a setup cost here. Namely, small creatures (or artifacts) need to be in our graveyard. The good news is those small creatures naturally end up in graveyards! Using two mana to get back a three-drop with a counter on it feels like very good value every time it happens. Sometimes it fishes out an Ambush Paratrooper or an Air Marshal to help you push through lethal. Occasionally, it re-buys one of our critical one-drops, which is especially useful for Citanul Stalwart. At higher rarities, it can be back-breaking for opponents. Third Path Iconoclast? Yotian Dissident? How about Skystrike Officer or Siege Veteran?

If we're playing an aggressive deck, which is what white wants to be doing in this format, the card has a very low failure rate. Often times you trade, and the next turn you double spell. Using two mana to get a 5/5 Warlord's Elite, a 3/3 Airlift Chaplain, or a 2/5 Yotian Medic leads to some very powerful turns.

Recommission's 17Lands data is admittedly underwhelming. It claims a GIH WR of 55.1% and has a negative IWD. As far as the eye test goes though, this card has over-performed for me. It has been a flexible and undercosted tool that has won me multiple games. Are my experiences the result of a small sample size or has this card been strong for you? Let me know in the comments.