All the talk so far this week has been about the Star City Games open in Indianapolis, but no one has mentioned the MTG Grudge Match in Philadelphia that occurred on the same day. This event was amazing and I was fortunate to be able to attend with my team, Rogue Squadron.

The title of the article isn’t just to be amusing, there really is an elephant in the room that no one is talking about. Everyone has been going on about the death of Caw-Blade but I am here to tell you that it is alive and well. Unfortunately, I have been working to port the best deck in recent memory over to the new format. Let me tell you, the villain has returned. I am not certain that it is the clear cut best deck but I will say that it does not have a bad matchup. Every time players have said that they are playing Caw-Blade I inquire about their list and when they say things like Hero of Bladehold or Geist of Saint Traft I try to let them know that really isn’t Caw-Blade. What made Caw-Blade so good was the power of all the individual cards in the deck. In addition they had Squadron Hawk as a reliable and consistent stream of threats to equip Sword of Feast and Famine to in order to obtain extra mana each turn and deny your opponent resources by making them discard cards. This concept is available and viable in Standard. How you ask? 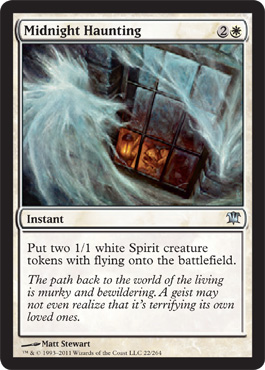 Midnight Haunting is no Squadron Hawk but only because it costs three instead of two. What do we get for that increase in cost? It gets upgraded to being an instant. This fact is hugely relevant against all the other control decks. It is also relevant against the aggro decks because of the ability to ambush their creatures. Being an instant also means that you can flash it back with Snapcaster Mage. This card single handedly revitalizes a dominant archetype. The loss of Celestial Colonnade is certainly felt but it does not invalidate the archetype.

I am sure you want to see the decklist I found success with at the MTG Grudgematch this past weekend.
Beware, Caw-Blade ahead.

I was extremely happy with this list and I feel like it is a real contender in the metagame. Basically it destroys any other decks in the same colors so in my opinion it is strictly better than other blue white lists. It has a great match against Solar Flare because you can never tap out and still beat them while controlling the game. Basically any non-red based aggro deck can be dealt with. Sometimes you can lose a game to them if they get out the gates too quickly but the only problematic aggro deck is RDW due to its ability to finish you off with burn.

So, how did my tournament go?

The first round was over quickly because my opponents deck was slow and they tapped out for threats like Venser, the Sojourner and Myr Battlesphere. All of my cards are good against them and none are really that scary against me. Oblivion Ring solves many problems.

These were the best two games of magic I have played in a while. Drew played amazingly well but my ability to play threats at the end of his turn combined with my ability to deal with anything important he was doing proved too much for him to handle. The first game took almost thirty minutes because I could not find threats to finish the game off and was stuck just controlling what he did. Game two, I hit a quick Midnight Haunting to put him on a ten turn clock. He tried to use Jace, Memory Adept to mill me out of the game but once I equipped Sword of Feast and Famine I was able to end the game quickly from there.

This round made it seem like the new red deck is quite an easy match for this deck. I know that it is not but I was able to take him out in two quick games. He had slow hands and I countered his spells then landed Gideon Jura into Consecrated Sphinx.

Game one was a fairly close back and forth battle between our two mirror colored decks but when he chose to tap out for Sun Titan to try and end the game, my Day of Judgment blew him out. Game two I boarded incorrectly against him because I had not seen very many creatures. Needless to say he played a ton of creatures that game. Luckily I did not board out all of my Day of Judgments. Game two was very close and I barely managed to pull it out.

This was my first experience playing against fellows from our race and while I do not like the flavor, the deck was sweet. Mayor of Avabruck // Howlpack Alpha, Champion of the Parish, and Garruk Relentless made for some interesting and skill intensive games. Day of Judgement blew him out late in a twenty five minute game one which I ended by attacking with my double inkmoth nexus draw. Game two he came out the gates way too fast and I did not draw a relevant spell outside my opening hand. Game three was also close but Day of Judgment took him by surprise once again. I suppose he wasn’t expecting it game three because I had double Consecrated Sphinx each equipped with Sword of Feast and Famine. My extra cards plus Snapcaster Mage being busted pulled it out for me. Great player, great deck, great games.

Due to the abnormal nature of this tournament being you only needed to make top 24 since those players qualified for a 32 player, single elimination, money tournament, the top six players were all able to triple draw into that event. I was a little sad not to get to test my deck against the other good players in the room but it was nice to triple draw into the money. The other eight slots came from the top eight of the sealed tournament on Friday.

You can probably realize that I lost the round based on that statement. Game one I kept Dismember, Gideon Jura, Consecrated Sphinx, and four lands that would let me play all colors of mana on the draw. I still think that I would have kept this hand in the dark any round. Had I known it was against mono red I certainly would have thrown it back. He ran me over game one and not drawing any new cards other than lands did not help matters. Game two was not as fast and I thought I stabilized at six life. I knew he had burn in his hand but I could not have predicted that it was two Incinerates since I had seen none of that card in the match. When I cast Timely Reinforcements, he responded with double Incinerate and I was one mana short to flash back Dissipate with Snapcaster Mage.

What a disappointment, losing in the first round of the top 32 tournament. I was extremely pleased with my deck and my play but I cannot help feeling let down.

This deck has the ability to beat any deck in the format because of its powerful spells. Caw-Blade is still alive, well, and still extremely good. If I were able to attend states, I certainly would be playing this deck.

The problem with red:

For anyone out there having trouble beating red, take a look at some cards that I have been considering playing to counteract their aggressive draws.

All of these cards are good in their respective rights. They all do a decent job of slowing down the burn deck. That is all we need, to slow the game down, because if we can make it to the late game we can overpower them with card advantage.

I wanted to briefly mention the red deck piloted by Josh Millikin of team Rogue Squadron. Josh also qualified for the top 32 tournament with this deck. Take a look.

The new Standard is pretty fun and both of these decks have proven initial success. Standard does have room to grow and innovate but these two decks to constrain your choices a little bit. Both of them are great choices for States if you are able to attend.

Until next time, Unleash that Destructive Force on Standard!

Mike Lanigan is high school math teacher by day and a shop owner by night. His tournament grinding may have slowed a little, but his love of the game has not. Mike's goal is to bring you a mix of perspectives from shop-owner insights to finance tips to metagame shifts and everything in between.