This week I wanted to take some time out and talk about an aspect of Judging that is taken much more seriously than your average ruling or penalty: Disqualifications. DQ’s are never pleasant for anyone involved. As Judges, we do everything we can to preserve the integrity of our tournament and that each game of Magic is played as fairly as the next. Sometimes, however, a player thinks he can game the system to his advantage. When this happens it carries a heavy penalty.

Now, not all DQ’s stem from cheating. Sometimes a player just doesn’t know that what he is doing is cheating. It sounds kind of funny but this situation happened when I was running a Alara Block Sealed Deck event. I was posting pairing for the second round when a player came up to me. 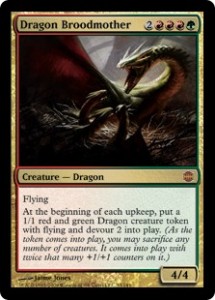 “JUDGE! I have a question. I have Dragon Broodmother in my deck. Twice in my last match I had him in play but was only putting tokens into play on my upkeeps. I honestly thought that was how it worked. I thought that until after the match when my opponent pointed out to me that it in fact was supposed to trigger EACH upkeep. Should either of us get a penalty for that last round?”

I genuinely don’t think that this player was trying to get his opponent in trouble. He also mentioned that he was interested in becoming a judge and had done some reading in the policy documents. This was why he was so curious what should happen. Now as far as this situation goes, on the surface, it seems pretty straight forward: one player was forgetting a triggered ability, and the other player seemed to realize this but was neglecting to tell his opponent or call a judge. Now if this were Awakening Zone there wouldn’t have been a problem. But there is one small difference between the Zone’s spawning ability and the Broodmother's: the Zone’s is optional.  Those three letters–"may"–make all the difference.

If you had missed the trigger for Awakening Zone,it is just assumed that you choose not to put a token in play. However, Dragon Broodmother’s ability isn’t optional and it must happen each upkeep. Now if both players honestly missed the trigger and when one realized it (if they do all) and they called a Judge the situation would have been very different. Warning for Missed Trigger, Warning for Failure to Maintain Game State (see below) and we would have put 2 tokens into play, as many triggers as there would have been in a turn cycle (from the end of one players phase, to the start of that players next same phase). This far after the fact I would have just explained that to him and forgotten about it.

Knowing that the Dragon Broodmother's ability is mandatory I felt like I needed to have a discussion with this player’s opponent from last round. I wanted to make sure that he wasn’t just misunderstood, or maybe he had just noticed after the fact. I didn’t want to go into an interrogation; I just wanted to see what had happened and if there was anything fishy going on.

The discussion I had with him revealed that he indeed knew that the Dragon should have been spawning each upkeep. He didn’t mention it to his opponent because, in his words, “it was terrible for me.” I genuinely don’t think his intentions were to cheat. I think he was just trying to be competitive and take advantage of his opponent’s mistake. However, in this instance, there is a fine line between competitive and Fraud. Knowingly disregarding the rules to gain advantage is the very definition given in the Infraction Procedure Guide as Cheating – Fraud. So after a brief discussion, I had no other choice, but to disqualify him.

Like I said earlier, Disqualifications are not fun for anyone involved. The players end up in an uncomfortable situation. The Judge has to deliver the bad news to someone.  Luckily in this instance, the player at fault wasn’t trying to be sneaky or underhanded. He just learned a valuable lesson for his future tournaments.

I really just wanted to take you through a little bit of the thought process Judges go through for a Disqualification. Whenever there is a high profile DQ at an event, the parts of it that become public are greatly speculated upon, but it should be known that no DQ is ever taken lightly by Judges. Much consideration is always taken before handing out such a heavy penalty.

As always, Keeping it Fun (when not handing out DQs),

Failure to Maintain Game State
This is a warning that is given out a lot and it's a lot of fancy words for what it really means. When two players are playing magic, and they notice a problem, they call a Judge to answer their question. Usually an issue is caught right away which causes a penalty for the player who messed something up, and we move on. Now if it is not caught right away and some time has passed or some important game action has happened (attack phase, a card drawn, a spell played, etc.) then the opposing player will get a warning as well.

It is both players responsibility to make sure that the game is being played properly and this penalty exists to reinforce this philosophy. It is always a warning and is never upgraded.