Sure, you don't have too many counterspells. Yeah, you can't draw cards or get rid of enchantments. Playing mono-Red is a challenge in and of itself.

I've been playing Jaya Ballard, Task Mage on-and-off as a Commander for over a year now and the deck has gone through several iterations over that period of time. When you're playing as restrictive an archetype as monored you quickly learn, and perhaps all too harshly, which cards are workhorses and which cards are duds. A trial by fire, if you will.

Even though there have been a couple times when I wondered why I kept the deck together when there are easier color combinations to play, the fun of blowing things up is just too much. And with Red, you're playing the color dedicated to burninating and asploding things.

For me, brewing and tweaking a decklist is almost a game in itself with its share of challenges and decision trees, and monored Commander decks offer plenty of challenges. Even after a year of deconstructing, reassembling, and testing my list I still don't think my monored deck is as good as it can be. But I think its destructive goodness is satisfactory enough to share with you fine readers.

In Commander, the obvious advantage to combining colors is that one can shore up the weaknesses of another. Playing Blue and need some removal? White can help you out in a pinch. Need mana ramp? Get some Green in there. When you play a single color, you are working within that color's boundaries of what it can and cannot do.

And there is a lot that red can't do. But restrictions breed creativity. You find answers to questions you would never have asked yourself otherwise. In Commander, there is a lot of room for discovering new cards to use and thinking a little more outside the box.

This deck loves to blow things up but it's fairly defensive when it goes about its business. When playing monored it's important to pace your plays so you don't get blown out by a sweeper or run out of spells to cast. It's very easy to run into topdeck mode, which is not the best place to be in Commander. 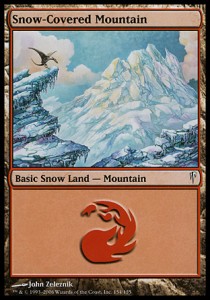 One thing you may notice is the relative cheapness of the cards. A suite of Snow-Covered Mountains may set you back about $15 but there are very concrete benefits to running these over regular Mountains (as I'll explain later). Not everyone has the spare cash for a Gauntlet of Might and it really isn't necessary, but if you can live with a copy that isn't in mint condition you can likely find one on eBay for about $40.

Koth of the Hammer is the other big-ticket card but has steadily decreased in price since Scars of Mirrodin was released. Other than a few other exceptions, the rest of the cards in the deck are dirt-cheap. Because you don't need to get filter lands, fetch lands, duals or shocks, monored is one of the cheapest decks out of all the ones I've built so far.

Perhaps the biggest mistake I made while working on the deck is that I tried to be too cute by building around Jaya. The honest truth is that Red doesn't possess enough tools to protect Jaya or tutor up various pieces to combo with. Another mistake I stumbled over was trying to include a lot of smaller utility creatures in the deck. One of Red's biggest strengths is its ability to nuke the board repeatedly. Unless the creature was reasonably resilient and/or offered good value, I cut it from the deck.

Some of the card choices are probably obvious, but I wanted to break down some of the more interesting choices that you may not usually see. 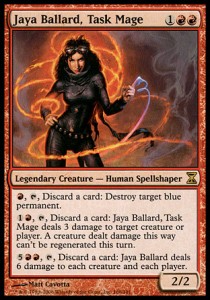 So why is Jaya the Commander if the deck isn't built around her? Because she is a guaranteed turn three play. I usually run about 37 to 38 lands in my decks, not including mana acceleration, which is slightly on the higher end of land counts. With that many lands it's not uncommon to draw a lot of mana sources in an opening hand. But with Jaya that's not a problem. She'll come out either turn two or three in every game, and unless an opponent has an answer you will likely have a live play every turn thereafter. If you draw spells, that's great. But if you continue to get flooded with lands, you can pitch them to Jaya to burn other people's critters or faces. The blue permanent hate is also very nice against many opposing Commanders, planeswalkers, and enchantments.

Out of the gate

Because of most of the creatures in the deck are large, and because you want to play huge burn spells, you're going to need a lot of mana. Since Red doesn't have access to ramp spells or mana dorks on the same level as Green, it relies a lot on artifacts for acceleration. Sometimes it's safer to hold back an accelerator if you're doing fine without it, as a sweeper could ruin your plans pretty quickly. That being said, with mana doublers like Extraplanar Lens and the Gauntlets, timing is everything. Don't run them out if you don't plan on abusing them immediately afterwards.

I mentioned earlier that Snow-Covered Mountains were worth the cost. Here are the reasons why: 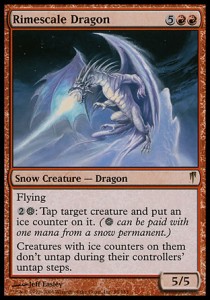 Rimescale Dragon: Red has a problem with dealing with large and/or indestructible creatures. Rimescale Dragon is a flying beater that has pseudo-removal built in for them.

Skred: With red removal you often have to pay mana through the nose in order to kill a creature. For one mana, Skred can take out some serious threats.

Mouth of Ronom: Protection from red sucks a lot. While this deck has other ways to get around that it's nice having a colorless kicked Burst Lightning handy. It's even nicer when you have a Crucible of Worlds out to recur it.

Scrying Sheets: After I tried this card I couldn't go back to not playing it. For two mana every turn you can pseudo-scry your way to better draws.

Extraplanar Lens: While not a Snow-related card it benefits from your snowy lands by denying other red players who aren't using Snow-Covered Mountains its benefits.

I've run out of gas far too many times while playing monored and I try to do as much as possible to mitigate that nasty pitfall. Skullclamp and Mind's Eye are very good, but because of the dearth of Red card advantage it's around this area that I start delving into normally "janky" cards that actually turn out quite useful. Candles of Leng and Urza's Blueprints are normally quite bad but since the deck can churn out a fair bit of mana the cost to pick up an extra card every turn is well worth it. 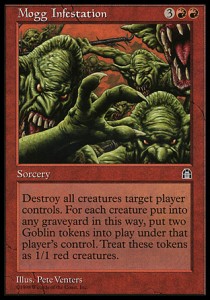 Often times players will think red only has damage-based removal. Not so! While standard X spells like Banefire and Earthquake are very useful for offering that extra reach, some of the lesser known spells have their place as well.

Mogg Infestation is a one-sided Day of Judgment with a drawback that is part politically beneficial, and part negligible. 1/1 Goblins? We're playing the color that has Starstorm, right? Flowstone Slide is another card I've been testing; you haven't known excess until you've cast Flowstone Slide for 10 to get rid of Ulamog, the Infinite Gyre. The deck also runs Contagion Engine, which is a nice sweeper that gets around protection and indestructibility.

Aftershock, Cinder Cloud, Fissure, and Lava Flow are expensive for what they do, but they're in Red and they can destroy both creatures and lands. They offer a kind of flexibility people don't usually expect. Aftershock in particular has been an all-star spell for me.

The "Fork" copying spells (Fork, Reverberate, Reiterate, Wild Ricochet) are great ways to double up on burn and removal spells, and can also act as counter-counterspells or can trump whatever game-ending spell another player plays by resolving your copy first.

I hope this piece gave you a few ideas about Red card choices for your existing Commander decks, or even nudged you a bit toward considering a new monred Commander deck. Everyone has different play styles and I'm sure my deck will look completely different than someone else's Adamaro, First to Desire deck. There are definitely challenges and limitations in Red, but there is also a lot of explosions, fires, and, most importantly, fun.

9 thoughts on “Let Your Flowstone Slide”