So while we were off for the holidays, I got an email from a reader and it is actually a very interesting situation. With all the Legacy events that happen more and more across the country, it's a situation that could very well come up for you. It has to do with a part of the game that isn’t dealt with very often. When people sit down to play magic, they usually just shuffle up, draw 7 cards, and start playing. However, there might be more going on in between some of these steps. So without further ado: 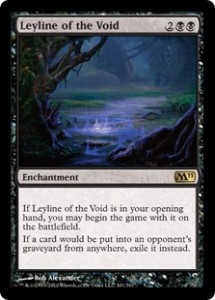 “JUDGE! I have a question. If my opponent as a Leyline of the Void in his opening hand, and I have a Gemstone Caverns in mine, can I Stifle his Leyline’s trigger if I’m going second?”

Leylines started an interesting trend in magic: taking advantage of the ability for things to happen before the game actually begins. With the addition of Gemstone Caverns to the mix I can see where this situation could come up. Why wouldn’t you be able to Stifle a Leyline? This feels exactly like that kind of thing you usually do with your Stifle. Something triggers “when” something else happens, goes on the stack, and you get to respond by countering the trigger. Why would this be any different?

When you’re playing a game of Magic there are many rules that tell you when and how to do things. They are less clear about these things before a game actually begins. To be honest when I first read this question I felt like I knew what the answer was, but in considering it I was having a hard time explaining why. So I started to do some digging.
There are a couple reasons that I found as to why you can’t Stifle a Leyline trigger.  The first, and probably the clearest reason,  is outlined in rule 103.5. This rule is a special exception to putting cards into play. Unlike a regular trigger that would go on the stack and then resolve, this rule states that if you have a card in your hand like a Leyline or Cavern, starting with the player who goes first, you simply put them into play. Once the player who goes first has put all of their cards into play, each other player in turn order puts any cards they have into play. So when the Leyline is put into play, the other player doesn’t even have the mana available to Stifle.

What if you’re playing in a game with more than two players. Let’s say Player 1 doesn’t have any cards to put into play, player 2 drops his Gemstone Caverns, and then Player 3 attempts to play his Leyline. In order to cast Stifle, you need to have a target; in this case, a triggered ability on the stack. But as we learned from rule 103.5, Leylines and other effects like this don’t use the stack. They are put directly into play. Since they never go onto the stack, they are never a legal target for Stifle. On top of all this, the rules state that you can only cast spells when you have priority. Even if something happens before a game begins, you still won’t get priority to respond to it.

So at the end of the day, if a player starts the game with a Leyline in his hand, they’ll get to put it into play. And no matter how bad it might be for you, there isn’t much you can do about it. Unless you happen to be packing Disenchant.

Since we are in Extended season, and PTQs are starting back up, I'm going start next week with some interactions from some Extended decks. As always, you can email me a question and you, too, could have the judge answer your call.

As always, keeping it fun,

There are many steps that take place before you actually begin your game. One thing that should be known for tournament magic is that you can do everything EXCEPT actually start the first turn, before the start of the round. It just gives you more of your 50ish minutes of tournament round to actually play your game.

Shuffling, choosing who goes first, drawing your hand, resolving mulligans, and resolving Leyline like effects all happen before the game actually begins. Leylines would happen last, because your "opening hand" is determined after you completely resolve mulligans and you don't get to see if your opponent has a Leyline before you choose to mulligan.

4 thoughts on “Can I Stifle a Leyline?”