Tournament reports, from a player’s perspective, usually start at round 1 and go over their matches round by round. Originally that was my plan, to do a round by round breakdown of rulings that happened throughout the day, but I noticed something by the end of the day. As a player things tend to get more interesting as the day goes on, as matches become more important, as one gets closer and closer to a top 8 spot. From my perspective however, it works a little differently.

The first few rounds always have the most questions, and sometimes the most interesting questions. This is because there are the most players at this point (209 for us in Seattle this week). This is also the rounds where everyone is even. People playing decks that are tested and proven against other top decks can end up randomly paired against the rogue deck of someone who thinks they have broken the format. So you can see more varied and different interactions during the first couple rounds.

So all that being said, I decided to take my tournament report and work backwards, starting at the end of the event and working my way towards round one. We played 8 rounds of Swiss with a cut to the top eight. At round 8 however, the Judge calls pretty much stopped as most of the players were so focused on winning or knew they were out so were letting more things slide. Plus at that point we had about 90 players remaining; there just wasn’t a lot of action. The top eight was fairly uneventful from a judging standpoint as well. So my report starts at round 7.

I got called over by a spectator that thought he saw something fishy going on.

“Judge! I see this guy playing, and a bunch of his sleeves are upside down. I know that he was told when he was playing against me that he was asked to fix it, but it looks like its messed up again.”

So this isn’t a rules question but is still something I thought was worth mentioning. First, I am always happy to get calls like this from spectators. I can’t have my eyes on everyone and if something strange is happening I want to be able to investigate if I need to do anything about it. But why is this a problem?

So I observed him for a little bit without telling him. I stood behind him and watched his shuffling patterns, looking to see if he was taking any time to make sure certain cards were a certain way. I was fairly sure that he was just being careless about the way he put his deck back together after a game and that there was no pattern. So I approached him after his game and asked him to correct the deck so all the cards were facing the same way. No penalty needed.

“Judge! My opponent cast a Bloodbraid Elf and cascaded into a Fauna Shaman. Now he wants to bring back his Vengevine from his Graveyard. Can he do that?”

Cascade’s ability allows you to cast a spell that you reveal off the top of your deck. In this case it was a creature, and happened to be the second creature that the cascading player cast this turn. Our friendly neighborhood 4/3 gets to come back into play.

Yes, he can do that. 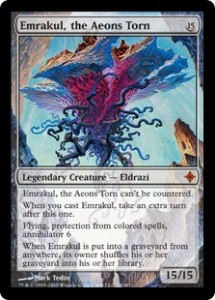 “Judge! My opponent has 2 Emrakul, the Aeons Torn in his Graveyard! He played them both over the course of a few turns and they ended dying to the Legend Rule. But they have been there now for a few turns. He has cast spells like Summoning Trap to fish through his deck, but those Emrakuls should be in there. What do we do about this?”

When a mistake like this happens, if it is caught right away, can be fixed: we can just shuffle them back in, issue a warning, and all is right again. In this cause though the mistake had happened a few turns ago and many things have happened since. It would be too damaging to the game to try and go back and fix the problem. The giant Eldrazi get to stay in the Graveyard, at least until another one joins them. I don’t think they will miss that one again. 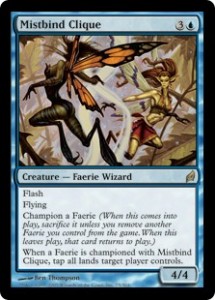 “Judge! I cast Mistbind Clique to tap down my opponents lands, but he used a Lightning Bolt to kill my Spellstutter Sprite before I could champion him. I don’t have any other fairies in play so what happens now? Do I still get to tap all my opponents lands?”

And your opponent is free to cast their spells for the turn.

“Judge! I used Jace, the Mind Sculptor’s +0 loyalty ability to draw three cards, and then I put three cards back on top of my deck.”

So this is a tricky situation. I pulled the player aside and he was able to identify the 3 cards on top of his deck, including the set that his forest was from. After taking a moment to make sure there was no other way he could have known this information, I allowed him to redo his Brainstorm and put the correct number of cards on top of his Library. 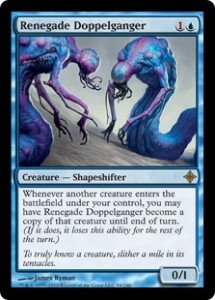 This player asked a very specific question. Even though he is going to get the answer he wanted, the outcome is still not exactly what he was hoping for. The Doppelganger will get to Persist back into play. Persist triggers when the creature dies, so it is still a Kitchen Finks at that point.

However, when it comes back into play it will be its original 0/1 self. Persist will put a -1/-1 counter on it and it will die, again.

“Judge! My opponent Cascaded with Bloodbraid Elf but forgot to shuffle the cascaded cards and put them under her Library. The two cards are just sitting there next to her library.”

This was a pretty easy fix. Shuffle the 2 cards, and put them on the bottom of her library. This was caught right away so we could go ahead a correct the issue, unlike the Emrkul call earlier (or, well, later).

The ruling was a Warning for Game Rules Violation for not properly resolving a cascade.

So that’s the first half of my report. Check back next week for rounds 1 through 4 where, as I said earlier, there were a lot more questions that came up.