Legacy is like the high stakes poker tables of magic trading. If you come in with no knowledge and a few in demand cards, a skilled opponent (read: opposing trader) can walk away leaving you feeling Dazed, worked over, and wondering if you even got a fair value trade. I have been a firsthand victim of this as legacy was heating up a few years back. I won't go into the specifics of it but I will say that it got me to begin learning the real value of cards that see play and are commonly traded in Legacy events. 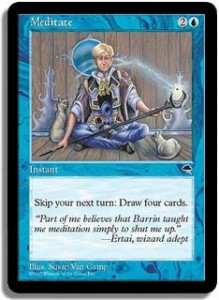 I don't promise you will finish reading this and be able to make money trading at legacy events. The format takes more time to study and understand the flow of then any other as far as economics go. Its also the one that can see volatile changes in price the fastest, but prices stay where they peak more often than standard and even continue to rise over time.

One aside here. I assume that if you're reading financial articles you know the basic cards to look for so I'm going to skip most of them, including but not limited to Aether Vial, Wasteland, Daze, Standstill, Counterbalance, most things considered "staple" in Goblins, Merfolk, and Counterbalance, as well as all dual lands. If you don't know those decks and the pieces that make them work then you need more research into legacy than just this article. I would call this a Mid-level legacy article as far as finance goes. Cards ranging from semi-staple, to fringe, to exclusive will be in here, though I may include some format staples because I think some of them need to be covered. See above.

The first few cards I want to look at here go into the deck Solidarity, AKA High Tide. Not to be confused with Spring Tide which operates at sorcery speed and has the biggest gain from the unbanning of Time Spiral, Solidarity works at instant speed and normally on your opponents turn. Unfortunately there aren't many money cards to be had in the deck, and its one of the cheapest decks in legacy to build. It uses no duals or wastelands, though they are an option. We'll go over a few examples anyways.

High Tide is a helper, not necessarily the key. Its a common and can be found for under a dollar. It holds casual appeal, but anyone looking to play the deck can easily get these at a low cost. I don't recommend picking these up because of their low value.

Turnabout is more of a key, but only when paired with High Tide. Its rare that games go long enough for this to generate substantial mana gains. Hovering between 2 and 4 dollars, it's a decent pick up if you can find it on the cheap. Its not worth picking up to sell to vendors, since they usually buy them for under a dollar.

Meditate is part of the draw engine the deck uses. When you're going to win on that turn, who cares if you skip the next few? It currently sees a price tag on the average of $6, and is worth having a couple in your binder.

Reset Ah ha! This is the reason I wanted to cover this deck. At 2 mana, you don't need many lands for this to begin providing gains that are worth something. Paired with a High Tide it can produce scary amounts of mana. Here's the kicker; it's a $20.00+ uncommon, and from Legends! Many players tend to criminally undervalue this card. Keep an eye open for them when trading with people that have older collections. They are very specific, only being played in this deck which is something to consider. Unfortunately the unbanning of Time Spiral doesn't do this card much in the way of favors, since its usually a one or the other situation. Still, good vendor item if you manage to pick some up when buying a collection.

Cunning Wish is something of an oddity. Its had quite the roller coaster life, ranging from almost $15 each to its current value of $5. It's been declining steadily for nearly two years, though as is the usual story of Legacy cards it needs only a few events of good performance before it sees a rise. I would pick them up for $3-$4 each if able, but don't aggressively go after them. Their age will help the price recover eventually, but its hard to say when that day might be. 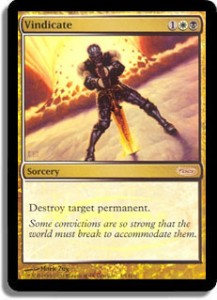 The next set of cards are commonly found in the deck Dead Guy Ale. A personal favorite of mine because of its card advantage engines.

Sword of Fire and Ice has seen slow but steady gains over the past two years, rising roughly one dollar a year. It currently sits between $13.60 and $18 on average, depending on where you see it. I would suggest getting a few of these to have in your binder. They always have casual appeal, and every so often they show up in a red and blue creature dominated format and do very well. If only we had formats where small red and blue creatures won a good number of games....if only.

Sword of Light and Shadow is the counterpart to SOFI, it sees values between $12.80 and $15.00. Having a few of them on hand won't hurt, as I could see both swords rising in demand steadily.

Vindicate has been loved by both competitive and casual players since its printing. It currently sits at an average of $15, and SCG is sold out of them at $18. A foil Vindicate can get you upwards of $50, and a Judge promo one can get you about $30. This card has been steadily rising, and should be watched. Trade for them when you see them, they will continue to rise over the next few years.

Mother of Runes is another uncommon that currently has its star rising. Sold out on both SCG and channelfireball, its current asking price is between $3 and $5, though I see those numbers going up in the near future with the success of Dead Guy Ale and Green and Taxes, where the card shines.

Dark Confidant has seen his day over and over again. He took the usual "rotate from standard" price hit, but recovered nicely, survived his premature departure from extended, and currently sits at a steady $15. Very few sites have multiple copies in stock, and as Legacy is explored more expect this card to continue to have influence over the format. Its use in Dead Guy Ale and BGW Junk and a host of other decks means his value will probably rise as legacy picks up more players.

The deck Painted Stone is seeing a rise in popularity again, and with many of its core pieces seeing a lull in price now is the time to invest in a few copies for trade or personal use. I expect all three of these cards to rise over the next year and beyond. I put them all on my list of cards to pick up when able.

Painters Servant is half of the combo, and is currently sitting at an average of $5. It pairs well with cards like Hydroblast and Pyroblast, but its lethal with the next card on the list...

Grindstone can be a beast by itself. It currently carries a price tag of $20+ and in 2008 hit a high of $36.  It currently has a higher number in stock than painters servant, which is helping to keep its price lower for the time being. 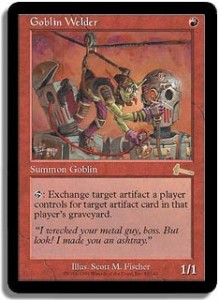 Hopefully this gives you a better idea of cards that carry value in the format beyond Goblins, Merfolk, and Tops. At this point everyone knows that Force of Will's and Wastelands carry a price tag, but with luck you can score a deal on some of the above cards. Legacy continues to grow, and as long as those cards aren't reprinted they stand to grow in value with the format. Four times a year every Legacy deck has the possibility to be removed from the format, or become a new dominant power player.

I'm going to start a thread for this article in our forums, I encourage you to check them out and get involved.

2 thoughts on “The Legacy of Legacy”