Nemesis was the second set in Masques block and brought with it some defining characters in Standard and beyond. We saw the Parallax enchantments, the Rebel queen, an amazing free spell and more. Some of the foils in Nemesis are worth silly amounts, so it pays to know the pricing on those high-ticket items. Let's get started on our rundown! 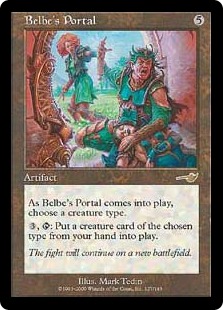 Although it only functions in tribal decks, the Portal does a pretty good job with most tribes. For example, it functionally gives the creatures Flash. This would be important if you were running something like a Wizard deck, where a surprise Voidmage Prodigy could make a difference. I've seen it used most spectacularly in Dragon decks, where a big savings on mana comes with just about every activation. You might consider it in a Horde of Notions EDH deck focused on Elementals, because even though it costs a bit of mana to get out, it solves a lot of colored mana problems. It's still mostly inferior to Quicksilver Amulet, but in Highlander formats, you might as well have as much of this effect as you can have.

If Force of Will is the underpinning of Vintage, then Daze defines Legacy. Some of the most consistent and powerful decks in Legacy can threaten with a single Island on the board, making you slow down a turn if you fear Daze. The format relies on such cheap threats that being set back a turn when you Daze isn't much of a problem.

Legacy players love their Dazes, and they'll pay a lot for foils. Keep an eye out for foil versions of this, since they've escalated a lot in recent months.

Burn for everyone! Burn players like to have foil decks, and Flame Rift is a pricey piece of cardboard for them. Worthless in non-foil, it's coveted when shiny.

Utility lands command a few bucks each, and even though the Haven requires white mana, people still love it in EDH. It is a second Maze of Ith, but it means that your blocking creatures can still damage the Haven'd monster. Thus, you get a sort of white removal! Immensely annoying, and it taps for mana, too. My friend and teammate Brian Demars has a theory about cards like Kor Haven; he feels that they'll all climb in value a bit because of EDH. With even more support coming along down the line, it might be worth to snag as many cheap copies of cards like Kor Haven, High Market, Dust Bowl and friends.

Lin Sivvi, destroyer of formats. The Rebel queen was just a little too good at everything she did. Even her big butt made it hard to burn her out. If you killed a rebel, she'd just recycle it, which made things like a single Thermal Glider or Lawbringer into pretty devastating recursion loops. I love to play her as my general, since you can loop Children of Korlis and other rebels. You can also do a power play by dropping her, then getting Mirror Entity and swinging for the fences. I've killed people on the fifth turn with a little help this way.

Lin Sivvi is pretty reasonably priced as a single, since people apparently don't build casual rebel decks. However, as a foil, she is silly expensive. I don't think there are many Lin Sivvi EDH decks, but people like foil generals, so of course she's been marked up a lot. 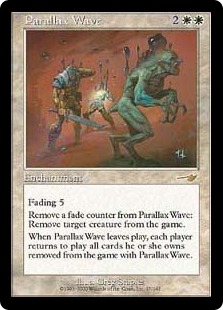 Of all the Parallax enchantments, this is the only valuable one. Parallax, by the way, is a method of finding an object's distance by measuring light from it at two different points. It's often used in astronomy, but I think it's used here because it sounds cool. For a long time, these cards had errata because you could cast one, then trigger all of its counters that you liked. With those on the stack, a Disenchant would keep things phased out forever. These days, the Wave is back to being able to do that, but it's not exactly a spectacular ability. The Wave was previously used in Rebel decks because, prior to new Legend rules, you used to be unable to play a Legendary permanent if one was already on the board! No “there can be only one!” rift opening up and sucking both Legends, just a stone block-out if one is already out. You can imagine that with Lin Sivvi as the cornerstone of every rebel deck, having a way to get rid of opposing ones was critical. You could Wave away the opposing Lin, then play your own. If your opponent killed yours and played one of their own, you could remove fading counters to legend-kill both of them. How annoying!

Now, it's thankfully relegated to EDH decks that need some fine-tuned creature removal.

For all the mana in the world, you can have your own colorless creature machine gun. I like the Flagship a lot in EDH, since you'll often hit seven mana and it's helpful to blow away creatures at instant speed. It got a little play in Standard, but mostly you'll see it pop up as a one-of in EDH decks. It's also thematically important to collectors, which makes it alluring in that regard.

Back when Dredge was more of a force, people hotly traded for this in foil. It's a free way to kill Leyline of the Void in Vintage, and Dredge players love foiling out their decks (seriously, every one of them seems to). Thus, this card is highly priced in foil. 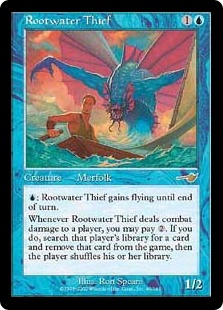 Mike Long (pictured on it) is gonna cheat a card right outta your deck! Rootwater Thief is a fun card to fantasize about. What if you have two? What if your opponent only has three win conditions and you strip all of them? It's a great dream, but too often, the Thief is just too slow to matter. While you're devoting two mana each turn, they are either tutoring for their win conditions or just playing out their game and killing you. Alternately, you'll have Merfolk lords out and kill them before you can strip stuff out. It's still a cute card and people love the ability.

This card was a key component of two hot decks, Pandemonium and Fires. Pandemonium, when combined with Sap Burst, makes for 21 damage. You can use Frantic Search and Attunement to set it up with Replenish or just naturally cast the components. Fires used the card with its namesake, because Haste broke open the Burst – the first turn, you make three 4/4s, the next turn, you swing with them at 3/3 and the opponent is probably dead. Even on its own, you'd get 20 damage from the card itself by making two tokens and crashing each turn unimpeded.

The chief reason people play this card is Deranged Hermit. You can get your first Hermit, pay his upkeep with Gaea's Cradle, then Poach up another one and swing with 3/3 Squirrels. This was actually a tournament-worthy strategy, as demonstrated by Aaron Forsythe's Angry Hermit deck. These days, Poacher has a few more targets like Viridian Zealot, Timberwatch Elf or Wellwisher (or Mirror Entity...). It's retained a good price, even though it's just an elf-fetcher.

Chalk this one up to Legacy, too. Free spells that remove Tarmogoyf are pretty cool! They were a little more expensive when you could play Vengevine with Survival of the Fittest, but people still like the uncommon. It's best when played in conjunction with an opposing fetchland so the creature gets shuffled back in. Otherwise, it's a lackluster card to play. Foils are, understandably, expensive.

A lot of the good cards in Nemesis owe it to being tricky with fading counters. Tangle Wire is a good example. It looks like trash on the surface, but remember – you can stack the fading to resolve before the tapping, so you always tap one less, and you can tap the Wire itself! What a design flaw! This meant you could grind down an opponent for a few turns with The Wire and apply supplemental pressure with Rishadan Port. All the while, your Chimeric Idol or whatever is going nasty. Tangle Wire is also heavily played in Stax and MUD in Vintage, since you can combine it with Goblin Welder for infinite tangles. On top of that, Stax plays a lot of permanents like Crucible of Worlds that don't mind being tapped. Adding this up, you'll see why Tangle Wire is a destructive tempo machine.

Nemesis was a pretty cool set to play around with. You can see the designers playing around with Fading, though they didn't really get a lot of the kinks worked out. Blastoderm would go lethal with Fires of Yavimaya all by its lonesome, for example, and Tangle Wire introduced a lot of people to stack tricks. Prophecy would follow it and be totally mediocre. Luckily, we've already done that set, so we'll move on to Invasion next week!

One thought on “Navigating Through Nemesis”