As you'll recall, we went the positive route last week and presented the five best intro decks of Zendikar block. This week, we're going negative! It's always useful to count the bad with the good, to illustrate what went both right and wrong with design, and see the variance present in a particular block. This isn't the first time that we've explored the darker side of intro decks; Three Deadly Shortcomings was devoted to those most common and deadly of flaws. It is, however, the first time we'll be taking a critical eye at so narrow a field.

Worldwake was in most regards a worthy successor to Zendikar, at least from a preconstructed perspective (the value of having a [card Jace, the Mind Sculptor]hundred-dollar mythic[/card] is best left to some of my more involved colleagues). The landfall mechanic expanded past its creature ties and began appearing on instants such as Searing Blaze and Mysteries of the Deep. Kicker became multikicker, highlighted in ways ranging from [card Apex Hawks]creatures[/card] to [card Spell Contortion]instants[/card] and even to an [card Everflowing Chalice]artifact[/card].

Brute Force's task was to highlight and illustrate the multikicker mechanic, and it did so in a red/green environment. A Wolfbriar Elemental walked the talk in the premium rare slot, while the Terastodon was perhaps a little less consistent, but a real monster when it landed. A number of other multikicker options give the deck a cohesive feel. So where did it all go wrong?

Try having one of the most expensive mana curves in the block with only two [card Borderland Ranger]Borderland Rangers[/card] and a Greenweaver Druid to support it. Perhaps the worst offender here is Rumbling Aftershocks, a nifty and thematically-fitting option that's just too unwieldy in actual play to be worth its place. Did we really need two [card Vastwood Zendikon]Vastwood Zendikons[/card], a card that comes not only come with a hefty price tag, but that further ties up your land? (Oh, right, they don't tap to defend.) Add in a lackluster removal suite consisting of a pair of [card Lightning Bolt]Lightning Bolts[/card], and you've got a stew with all the right ingredients, but not in the best of proportions. 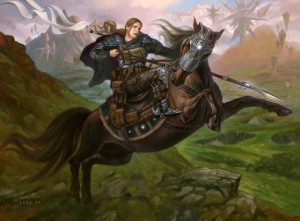 4. Leveler's Glory (Rise of the Eldrazi)

Levelers really seemed to polarise the community when they were unveiled. Were they good or bad? Should they have leveled at instant or sorcery speed? I must confess, though, I was firmly in the approving camp: levelers were a great example of a solid concept splendidly executed. Thus I had good cause to be excited about the release of not one, but two leveler-focused decks in Rise of the Eldrazi, but I was to end up disappointed in the both of them. The blue/black Leveler's Scorn was the more entertaining of the two, and while it suffered from congestion at the three-drop slot (an awkward slot to be congested in when a number of both your cards as well as your levelers are competing for your mana), it was still an improvement over Leveler's Glory.

To steal a line from Braveheart, this deck was one that from top to bottom had no sense of itself. Part of it wanted to be white weenie, with options like Caravan Escort, Affa Guard Hound, and of course the premium Student of Warfare. Other cards like the Snapping Drake and Makindi Griffin pointed at a more expensive aerial component. Those routes aren't mutually exclusive, but then you add a third dimension of a defensive quasi-control element with Wall of Frost, Hedron-Field Purists, and Soulbound Guardians and any cohesive game plan just goes up in smoke.

Oh, and might I mention that every single card in its removal package is blue?

Now here's a white weenie deck that gets it right! You can't accuse Kor Armory of lacking a sense of purpose and identity. All white creatures (mainly Kor, with an exception in Serra Angel), a tribally-potent premium rare in the Armament Master, with another rare (Conqueror's Pledge) that ties neatly into the theme. Nope, no identity crisis here.

Instead, where it falls down is in the execution. First, any weenie/swarm deck lives and dies on its aggression, and it's hard to sustain that strategy when your opponent doesn't cooperate, and instead starts dropping creatures bigger than yours. That's where removal becomes essential, and Kor Armory sleeps on the job: two [card Pacifism]Pacifisms[/card] and a Divine Verdict. Furthermore, it packs in "helpful" inclusions like Landbind Ritual, Narrow Escape, and two [card Kor Cartographer]Kor Cartographers[/card] which seem optimised to make the game go longer. What aggressive strategy wants to pay four mana for a bear, even if it does come with a free (tapped) Plains?

While occasionally living the dream of getting one of the deck's three equipment into play with the Armament Master, most times you'll find yourself wishing for something other than a Spidersilk Net. For the most part, though, you'll just find yourself dealing into frustration as this mid-paced weenie deck takes too long to get there.

Perhaps I'm being a bit too hard on Pumped Up by placing it second. After all, if Leveler's Glory wound up on the list because it was being pulled in three directions, could a case perhaps be made that Pumped Up is an improvement because it's only split in two? With Glory, though, you could be forgiven for not noticing the challenges of the deck right away, but this one suffers from no such subtlety.

Where Brute Force looked to showcase multikicker, this earlier intro deck looked to do the same for kicker (as the multi version hadn't arrived yet). Toward that end, it packed in goodies like Torch Slinger and Burst Lightning. The problem it faced was simply one of mana commitment: this deck asked a lot of its pilot, and the payoff wasn't always there. Either cards came demanding a heavy colour commitment up front (Phantom Warrior, Dragon Whelp), asked for it to optimise the card (Into the Roil, Torch Slinger), or simply had their power level potentially throttled by what lands you'd managed to play (again the Dragon Whelp, Spire Barrage). Naturally this could be forgiven on endgame bombs like Hellkite Charger or Rite of Replication, the deck's two rares, but in actual play it was so inconsistent that you felt like the deck was designed to make you feel like you're driving 35mph in a Porsche.

Compounding the sin, this deck was one of the worst offenders for lacking set flavour. Stuffed with core set filler (I'm looking at you, Goblin Piker, but you're far from alone), it really didn't feel all that... Zendikar-ish. And that, perhaps, was the unkindest cut of all.

1. Totem Power (Rise of the Eldrazi)

We've made a number of stops along this boulevard of broken dreams, but in the end there really can be only one. In this case it came in the final set of the block, and it was the odd man out. In order to showcase the overarching themes and mechanics of the set, R&D gave a pair of deck slots to each of the set's two primary innovations: level-up creatures and "Battlecruiser Magic" (Edrazi Spawn ramp into massive Eldrazi creatures). The former was a mixed bag (obviously, as one of them ended up in this august company), the latter a smashing success (both of which landed on last week's Top 5 list). Still, there was the matter of the fifth deck, and that was devoted to totem armor. 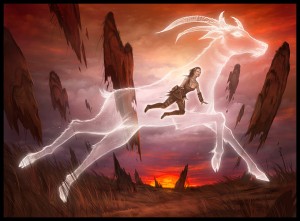 Sure it's a nifty trick, and they were very creatively rendered, but an entire deck around them? It seemed a tall order. Still, with the right deck it could certainly be pulled off. Unfortunately, Totem Power wasn't the right deck. Bad totem choices (an Eland Umbra over a Hyena Umbra?) and a general lack of synergy prevented this from being anything more than a glorified beats deck, and a poor one at that.

To be fair, there was an attempt at synergy with the inclusion of the Kor Spiritdancer, but no Aura Gnarlid? Howabout a Pelakka Wurm and Gigantomancer without a single piece of ramp? Or janky cards like Angel's Mercy and Ornithopter, which requires either a totem armor or an on-line Gigantomancer to justify its slot? This deck had every bit the look and feel of a cobble-together of spare parts around the laboratory. Take or leave totem armor, but hold your nose on this one.

To be fair, Wizards deliberately throws a few lemons into most any intro pack mix for the encouragement of deckbuilding, but each of these has gone above and beyond in discharging this duty. If there's a worse deck than these in the mix, it'd be hard to find, but I'd enjoy hearing your experiences with the worst of the bunch (any of these, or others from the block). Zendikar block was a disappointing time for the intro deck, and I've written before on how Scars block has turned over a new leaf. Still, if you ever get the itch to revisit the land of Zendikar, you'll know which stops to avoid.

One thought on “The Five Worst Intro Decks of Zendikar Block”