New Phyrexia has only just now been released on Magic Online, but the pauper community has been all atwitter for weeks because it’s going to impact the format in a big, big way. Because of that, and because I care about you, and because it’s just the thing to do while waiting for the set's singles to be widely available, I’m doing a set review. Or a partial one, anyway. Since I can’t be bothered to come up with forty-five different ways to say “This card stinks!” I’m just going to hit what I think are the ten best cards poised to make their mark on the pauper format, along with a few potential sleepers of which you might also like to be aware. 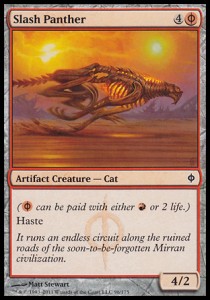 Some of you are probably thinking that this card isn’t that good, and that you’d never play it over fellow newcomer Thundering Tanadon. You’re right, it’s not as good as that. But I wouldn’t count it out just yet because haste can be tricky.

Assuming you attack every turn, this guy outdamages Tanadon until your ninth turn when they’ll each have dealt 20 damage. That’s pretty impressive. Now, it’s also true that you’re unlikely to actually hit somebody five times with it, thanks to its measly two toughness, but it does trade with the x/4s in the format, which is a good thing. Unfortunately, it goes down hard to certain cards that are pretty commonly played, such as Disfigure, Frogmite, and Lightning Bolt, and it doesn’t give you much value for any of them. Look for this to be played against decks that don’t feature any of those, either sideboard or maindeck depending on how prevalent those decks are.

If this could target your opponent’s creatures and therefore counter Invigorate and Edge of the Divinity, it would be an instant format staple. As it is, it’s still pretty good, and a fair number of non-blue decks would like access to this effect. It’s not that exciting, but I’d be surprised if it didn’t see a decent amount of play.

This is easily the most overrated card in the set (a surprising number of people are just adding four to any deck they make for the sake of deck-thinning; do not do this), but that doesn’t mean it’s not good. Its obvious interaction is with the storm mechanic, and while the Frantic Storm deck probably won’t run it (it doesn’t really have trouble getting to the relatively low storm count it needs to bounce all of its opponent’s permanents), it’s worth an extra damage and/or two 1/1's to a red-based storm deck, a pretty huge for a zero-mana cantrip. In a less obvious application, I could see this finding a home in monoblack control to make Duress more effective, as well as in the sideboards of Cloudpost decks to let you know when it’s safe to tap out for Rolling Thunder or Ulamog's Crusher. 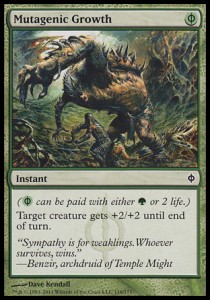 This is another solid utility card, and it’s actually quite a bit more versatile than it looks at first glance. It protects your creature from burn, it gets a couple extra points of damage in, and it can turn an unfavorable combat step into a mini-blowout. But of course, the biggest reason to play this card (and the deck that will play it the most) is infect. The deck already has access to several free pump spells, and this one should push it to a critical mass of them and make those turn two and three kills a lot less hypothetical.

Not too much to say about this one. It’s an obvious include in infect decks, because power equal to casting cost is kind of a big deal to them. It’s one of the better cards in the set because it makes an already pretty good deck better and will see a lot of play for that reason.

There’s a lot of hype about this one, and I’m not sure it’s all warranted. Basically, it’s a 3/1 with a combat ability for two mana. That’s good, right?

Except it really does die to every removal spell in the format, doesn’t get by Affinity’s 4/4s, and doesn’t have a whole lot of x/3s to prey on with its first strike. Still, it is a three power two-drop, and that’s nothing to sneeze at. Every deckbuilder who’s playing something even moderately should be considering this card right now, and it’s bound to work out in at least some of them. 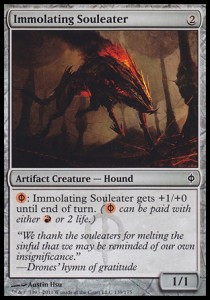 It might seem a little odd to say it about something I’m ranking so highly, but this is the one card on this list that really might not see much play at all. That’s because there’s no current deck that can easily run it, and it might be tricky to get a good deck built that uses it effectively. So why do I think so highly of it?

Think of the possibilities! Remember when all Suicide Black needed to win was a creature and a Hatred? This card is both of those! It’s the Channel and the Fireball! How is that not awesome? Look, it might work out and it might not, but as a deckbuilder I can tell you that I for one am not going to stop messing with it any time soon.

If Porcelain Legionnaire is a decent card that looks amazing at a glance, Vault Skirge is an amazing card that looks decent at a glance. Having an evasive lifelinker ready to attack on turn two is pretty spiffy, and the list of cards that have synergy with this is as long as my arm. Think about how quickly this can get out of hand with Rancor or Bonesplitter. Think about how good Ninja of the Deep Hours is when you have access to a flying one-drop that doesn’t suck. He might not look like much, but I suspect you’ll be seeing him all over the place soon.

You know those two infect supporting cards above? They’re pretty good. They help the deck out. But Glistener Elf is that deck.

Monogreen infect has been so hungry for a one-drop that some people have been playing Virulent Sliver in it, and that doesn’t even have Infect! It’s hard to overstate the impact this card will have on the format. It makes infect a tier one deck as soon as it’s available, and it’ll stay a tier one deck until it has sufficiently warped the format around itself. You’re going to see a lot more Lightning Bolts and Disfigures once this guy hits, and a whole lot less sorcery-speed removal.

I might sound hyperbolic, but trust me: this guy has the same “must kill on sight” status that Goblin Lackey once had in Legacy. You’re going to need to be as prepared for infect as you are for affinity, and that’s all thanks to this measly 1/1. 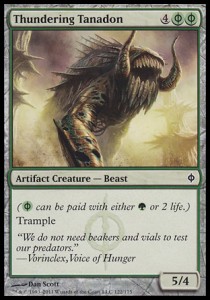 That’s a short play I wrote about what happens when you attack with Thundering Tanadon. Through the use of metaphor, I was also able to make it about Thundering Tanadon’s arrival in this format. Put simply: this is the best five power four-drop in the format with the very debatable exception of Blastoderm, and it’s not even truly green. Any deck can play this.

Late-game beef for white weenie? Check. Aggressive alternate win condition for elves? Check. Even makes Suicide Black playable? Uh... almost check? Seriously guys, it’s good. It’s the kind of ridiculous, efficient fatty that just doesn’t get printed at common, and we should all give thanks to Wizards for this gift.

In addition to those 10, there are a few other noteworthy cards:

Spined Thopter - I feel a little bad omitting this one, because all of his buddies from the same cycle made the main list. You’d be number eleven, little guy. I know there are a bunch of great two-power fliers for two mana already available in the format, but I’m sure plenty of people will opt to play you instead of them. Awww, ugly duckling.

Blighted Agent and Lost Leonin - Remember what I said above about Infect warping the format around itself? These guys might come into play after that happens. Right now, the consistency that mono-green offers means that a splash isn’t really worthwhile, but there may come a time when outside tech is needed, and both of the creatures are very, very good. In fact, they’re the two best infect two-drops. Lost Leonin is appealing because it’s just so aggressive, but I actually think Blighted Agent is the better of the two. Monogreen infect decks are so desperate for evasion that they’re playing jank like Predator's Strike, so I’m pretty sure an unblockable creature would be a welcome addition.

Geth's Verdict - Not spectacular or anything. Probably not even immediately playable. I only bring it up because it’s a solid utility card that’s good at what it does (i.e. replacing Diabolic Edict in monoblack control lists that still run it), and probably also the only decent card in its cycle. Try not to forget it exists, because it will be useful someday.

Remember the Fallen - I’ve seen people bag on this card, but I'm counting on it showing up here and there. Drawing two cards for three mana is not terrible at least, but regrowing two cards for three mana is surely better, right? If you’re playing a deck with a ton of artifacts, many of which are creatures that you can play in the same turn that you cast this, this card might work if there are, you know, any decks like that out there.

Artillerize - It’s not Shrapnel Blast, but it is solid. This would probably have made my top ten list if there weren’t so many good burn spells already, but I’d be surprised if this didn’t see play.

So that’s New Phyrexia. Infect is the big winner, but there are a number of good additions to the format, and thanks to Phyrexian mana a lot of them are playable across a wide range of decks. All in all, I expect this set to shake up the format and add a ton of variety.