Peter Knudson introduces a format to appease your Zombie apocalypse needs. Grab a deck and prepare to face off against the relentless Zombie Horde with Peter's new way to put your cards to use and outlive the undead.
Read Peter's followup article here: "Horde Magic: An Open Source Project"

You gaze down a once familiar street. The houses that used to be so full of life are now decorated with shattered windows and broken-in doors. You can’t take two steps without having to avoid an overturned car or a mound of debris. It seems you and your friends are the only people left in the city... maybe even the world.

Suddenly, the ground starts to rumble… and you hear them.

Screeching and moaning, the relentless Zombies have caught your scent. The hoard charges straight at you, and you know they won’t stop until you've become their lunch. You quickly search for a weapon to fight for your life…

Machine gun? Don’t have one.

Machete? Last I checked, you don’t live in the Amazon rainforest.

You dig deep and pull out…. 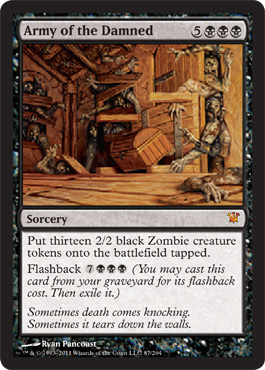 Innistrad is nearly upon us, and with it's copious amount of Zombie goodness, it's perfect timing to show-off the new Magic format I've spent some time working on this year. One of the many reasons I love Magic is it's incredible depth. There are always new ways to use your Magic cards, and you can create vastly different experiences just by changing some of the rules.

Those tokens floating around those packs always seem to have a very limited use. Well, not anymore! 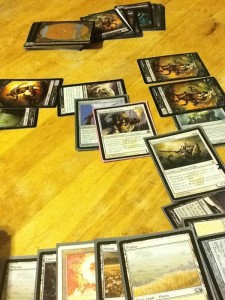 As Mark Rosewater wrote in the article spoiling Army of the Damned, the scariest aspect about Zombies "isn't any one zombie, but a large horde of zombies." It's hard to not appreciate the Zombie creature type, specifically for it's flavor in Magic settings. It's very easy to capture the essence of a Zombie in a Magic card, which would explain its reoccurring role in sets since the Alpha release.

Horde Magic is a format sharing similarities with Planechase, Two-Headed Giant, and Archenemy. It involves players playing cooperatively against a Horde deck, which is a preconstructed Magic deck consisting of 60% creature token cards. While there could be a whole slew of different Horde decks (Goblins, Squirrels), the best and easily most flavorful creature type is our Zombie friends.

The goal of Horde Magic is to survive the onslaught of Zombies. The Horde deck has no life total, so the only way to win is to... uh... not die. Eventually the deck will run out of cards and you'll be able to breath sight of relief.

Zombies generally don't do a lot of thinking. They just want you dead. So in Horde Magic, the Horde has no decisions to make, and thus the Horde deck also doesn't require a pilot to run. This creates unique co-op gameplay, which many are likely to really enjoy. Additionally, you can battle the Horde deck solo.

I've had a lot fun playing Horde Magic with friends at school and at my local store and I've been encouraged to share my format with others. If you find this concept interesting, the Horde deck can be assembled quite inexpensively, especially if you have a bunch of Zombie tokens lying around.

There can be anywhere between one and four Survivors, which are the players teaming up to defend against the Horde. The number of Survivors determine the number of cards in the Horde deck, as the difficulty needs to scale accordingly. The Survivors have a collective life total of 20 life per player, and everybody loses when that life total becomes 0.

The number of Zombies you'll face over the course of the game is based on the number of Survivors. For three Survivors, take your 100 card Horde deck and remove a random 25 cards, bringing your Horde deck to a total of 75. The Horde starts with no cards in hand and no permanents on the battlefield.

The Survivors get 3 turns to set up their defenses before the Horde takes a turn. Just like in Archenemy and Two-Headed Giant, the Survivors take turns simultaneously. After the 3 turn set-up, the Survivors and the Horde alternate turns.

Then the Zombies enter combat. Since Zombies are generally brainless, they come charging in without thinking twice. All Zombies have haste and must attack each turn if able. That's just how they roll. Since the survivors are on a team together, when the Zombies attack, they attack every player at the same time, just like in Two-Headed Giant, and when any of the survivors choose to block, they block for the whole team.

You, as the Survivors, win when the Zombie deck can't flip over anymore Zombies, and the Horde doesn't control any more Zombies. You can use anything at your disposal to stem the bleeding, from Walls, to Wrath of Gods, to blocking with huge fatties. However, if you and your teammates feel that you have adequate defenses for the next Zombie attack, you can also attack the Horde at it's source. Zombies can't block, and have no life total, so it's safe to go on the offensive if you think you can survive the next wave of Zombies.

For each point of damage done to the Horde, the Horde mills one card off the top of their deck.

The Survivors are victorious when all the Zombies in play are dead, and the Horde deck has run out of cards. The Horde wins when the Survivors' life total becomes 0.

When you have more Survivors, the Horde becomes easier to defeat. So the number cards that the Survivors face is determined by players.

The Horde deck is 100 cards, so just shuffle and take a chunk at random.

This is the current iteration of the Horde deck. Just like a cube, this is a living, breathing object, so it should be altered to fit power-level of the Survivors or if new cards come out. For example, we can add Army of the Damned and Endless Ranks of the Dead because of Innistrad. I'm trying them out for now, but it's probable that 13 Zombies is just a little too good.

If there is enough interest, I'd be happy to write a follow-up delving into the card choices for the Horde deck, as well as my thought process behind development. However, I do feel obligated to address a few points:

I really hope that you found Horde Magic interesting. One of my passions in Magic is discovering new ways to experience the game. While an intern at WotC, most of my finger prints can be found on the products Planechase, Commander, and TweetMTG (which I designed), which I feel have all brought something new to the kitchen table.

Magic is a game with a rich competitive aspect, but if you look beyond the tournament scene, you'll notice that Magic can be enjoyed on many different levels. I think that people are losing touch with their casual side, which is saddening.

While I don't expect to have this format catch on fire, I really do hope I inspired someone to create something new. If you like to design games, Magic cards makes a perfect medium to build something completely different. EDH, Cube, and Overextended were all products of someone saying, "Wouldn't it be fun to change it up?"

What do you think of Horde Magic?

Acknowledgements! Lot's of people helped me with this and I need to give them credit:

Loved reading about Horde Magic? Quiet Speculation Insider has over 2 years of articles ready for you to read right now!

Unlock All Insider Articles!
Not sure? Check out our 111% Guarantee!.