The time to Ascend into Darkness is upon us!

Dark Ascension spoilers are about to be on us in full force, and I’m sure the full set will be nearly as awesome as Innistrad was. Regardless of your opinion on double-faced cards, there’s no denying how popular the set has been.

And here we’ve dug up some spoilers by way of the blog MTG-Realm. Here’s the link to the original post with inspiration from the salient parts that are posted below.

It seems that a Japanese site has posted the below image of the goodies from Dark Ascension, and we can glean some knowledge from this picture. 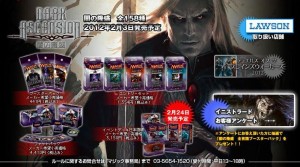 Let’s start with the picture that we have the best view of. These are the Dark Ascension Intro Packs, and you can make out the mana symbols in the top left of each box, giving us a hint of what’s inside.

From this image, it seems that we can expect the following color combinations:

Based on Innistrad, we can make a few educated guesses at the contents of each pack:

While all of this is blatant speculation, we have some solid clues from Innistrad to draw from and I’m reasonably confident we're not too far off the mark here.

And one other note that we can draw on from the promotion poster: If you haven’t guessed it already, it’s pretty clear that Sorin is back. I expect his Vengeance will play a major role in the set.

And don't forget about Faithless Looting.

What do you guys think? What do you think we can expect from Dark Ascension?

One thought on “Ascending into Darkness (Dark Ascension Spoilers!)”