I have made it no secret that I really like Modern. Whether you feel the same addiction to making fun decks or whether you just want to win PTQs, I have got some hot tech for you today. I'm presenting five cards that are worth building heavily around. They are not simply toss-ins, but they aren't so narrow that you have to maximize them at the expense of the rest of your deck. Let's jump in! 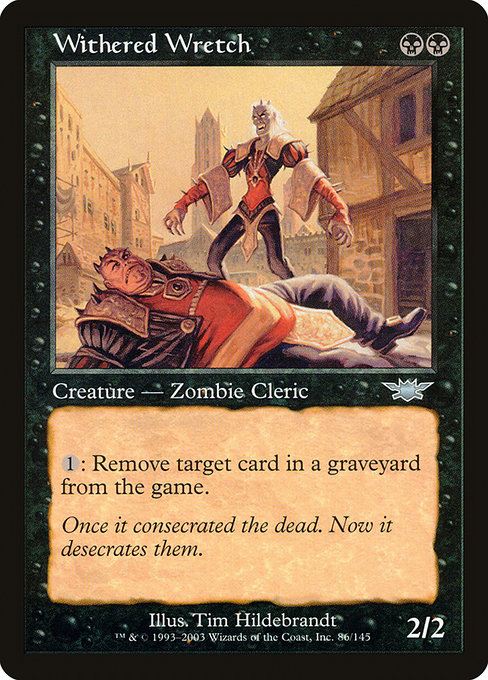 Has anyone else noticed how good this guy got when Punishing Fires left? Wretch is an absolute monster on someone's graveyard and he's a reasonable beater, to boot. Against Zoo, he makes sure Lavamancers don't turn on and Tarmogoyfs remain 0/1s. He invalidates Snapcaster Mage completely. He turns off Mystical Teachings' Flashback and smashes recursive strategies.

Speaking of recursion, there are a lot of decks in Modern right now that exploit the poor quality of maindeckable graveyard hate. I consider things like Gifts decks in this category. If you have two or three Wretches with some backup, they'll never be able to use their namesake spell the way they want to. Wretch is the best (only) graveyard hate that I would be proud to maindeck. The more you play him, the more you love him. You'll find him breaking Martyr of Sands recursion before too long.

Build around it by: stocking up on a heavy black list that can apply early pressure. Wretch is a long-term card and he's mana-intensive, but he shuts down other long-term strategies. Combine with things like Dark Confidant or slot it right into a Jund deck (but pack those Graven Cairns!). 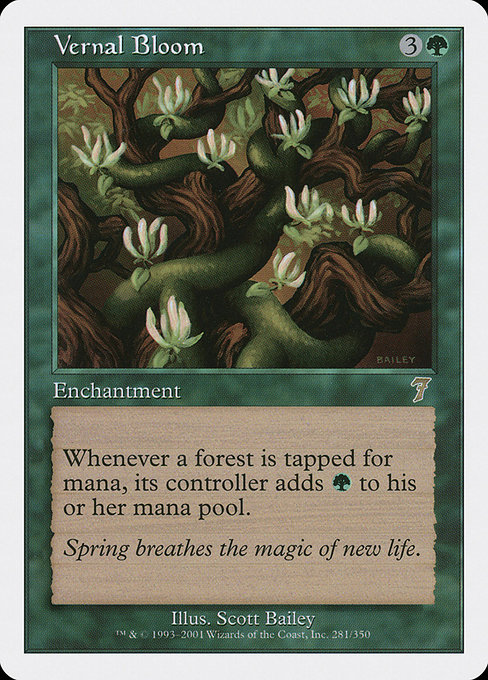 People are taking serious runs at making ramp decks in Modern, but they're all awful. They run things like Overgrown Battlement and Llanowar Elves. Why not spend your first turn suspending Search for Tomorrow, your second turn with Sakura-Tribe Elder and your third turn with Bloom? On the fourth turn, you're tapping out to cast Tooth and Nail or Kozilek, Butcher of Truth. You're in kissing distance of hardcasting Emrakul. There's probably a place for ramp decks in Modern, and Vernal Bloom requires that kind of attention.

Build around it by: playing 22-24 basic forests - maybe you want Stomping Ground for that Red Sun's Zenith. Combine with Summoning Trap and Tooth and Nail. Max out on Kozilek and Emrakul. Ramp for three turns, then explode onto the board. The inevitability that comes with shuffling your Tooths back every time they kill your Eldrazi means you'll never hurt for gas.

Modern sometimes involves big creature mobs smashing each other. Rise gets the most out of it, whether you want to tempo someone or get some recursion with your Snapcasters. Rise almost always has targets. Unsummon isn't great in this format, but maybe Unsummon and Raise Dead become good. When you are pulling back a Snapcaster from the grave and bouncing your Vendilion Clique for a reload, that combo is just fine.

Fall is 3/4ths of a Hymn to Tourach. You can't mana-screw an opponent, but you can do just about everything else that Hymn can do. Modern has a paucity of playable draw cards. What you draw in the opening seven is pretty much what you'll be working with for your first few turns, so losing two of those cards at random is crippling. That triple Kird Ape draw from Zoo can get ripped into a one-monkey rush, unable to get a foothold against an opponent who is working their way into goodies like Bloodbraid Elf. It's fine later in the game if the opponent isn't wisely holding lands in their hand. Ripping out that Path to Exile before casting your finisher is superb.

Build around it by: playing Grixis colors. Fall is good enough to cram into Jund and never cast the Rise part outside of Cascading, but that re-buy on creatures is what makes this split card worthwhile. I have had success with it in Gifts piles with Snapcaster and by pulling back value guys like Gatekeeper of Malakir. 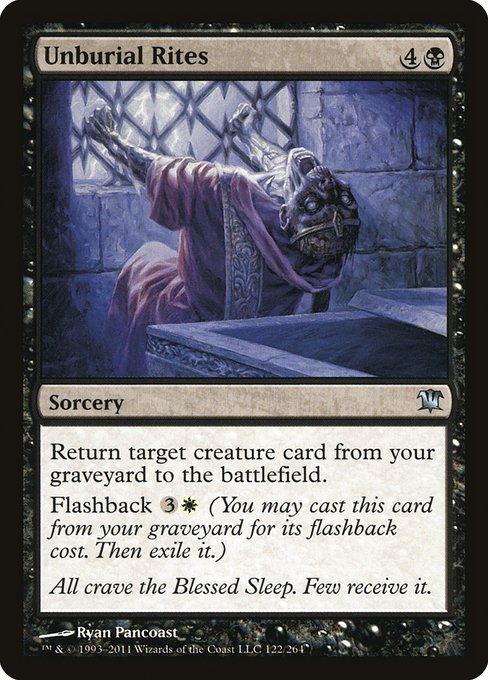 Let's put aside the bad combo of Gifts for Rites and Iona and look at what else this spell will do. Five mana is eminently reachable in Modern, especially if you run a little bit of ramp. When you get there, you get to put whatever monster you threw away back into play. That means your evoked Shriekmaw comes back for another taste. When you flash back the Rites, your Mulldrifter jumps back in. That one Rites can turn into a five-for-one with a deck built to attrition down an opponent. A lot of Modern decks have an issue with running out of steam and Unburial Rites solves that problem -TWICE!

Build around it by: playing it with lots of value creatures. I have faith that a B/W board control deck could be pretty decent in Modern. You control with Fiend Hunters and Shriekmaws, you draw cards with Phyrexian Arena and you buy back monsters like Wurmcoil Engine. Anything with an enters-the-battlefield effect is worth looking at with this. Avoid trying to game things by reanimating fatties and focus on getting three or four extra cards from your one Unburial Rites. 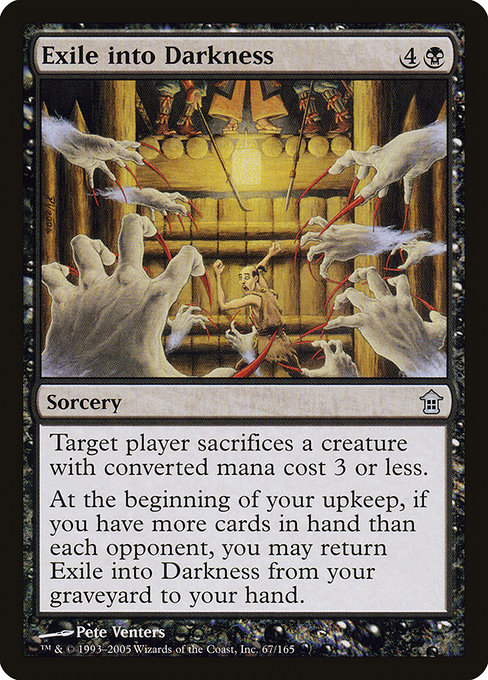 Exile isn't going to win you a game, but it will lock down creatures, especially now that Fires is gone. Let's say you're playing a slower control deck like Teachings and you've managed to blow away all of the early monsters. Exile lets you lock down the assault. They'll have to play more creatures and overextend into a Damnation or just get those same critters chipped away. For a deck without reach, beating Exile is nearly impossible.

Build around it by: playing Gifts Ungiven and grabbing your lone copy with this. It's also not out of the realm of possibility to play this like a Squee, feeding an engine. I'd love to use this with Compulsion, for example, but that can't happen. I'm sure there are good alternatives, though.

Go forth and brew! These are oddball ideas, but they should get you thinking about the strong and weak points of decks in Modern.