“Alright,” I thought, staring at the black words set in a white box. “I'm moving to Gathering Magic.”

I sat there, trying to figure out what I was going to send to Kelly and Tyler. It wasn't that I wanted to leave Quiet Speculation, it's just I'd already been feeling pressed for time last quarter between school and writing and I'm going to be taking an additional class this coming quarter.

“Well, maybe I could squeeze some time in if I stopped procrastinating...”

“Snap out of it. You could, but there's no point in stressing yourself that much; the content would be terrible.”

I lamented the fact that I couldn't comfortably fit in two writing positions.

“Oh, shut up! Lots of people would love to have one. Look at the Star City Games Talent Search!”

So I sat down and I wrote the email. And it really wasn't that bad, as Tyler and Kelly were supportive and understanding. The thing is, I still needed to say goodbye publicly. And that was bound to be a bit harder.

I could spend an entire column talking about the move, but that would be selfish. Most of the people who read this column don't know me or have any particular investment in my life.

Oh... it looks like I've been forsaking that. Well, let's get some music on. Beatles? I guess I'm feeling pretty nostalgic. Anyway, time to take the leap of faith I need when I'm searching for content: I'm Going in Blind. 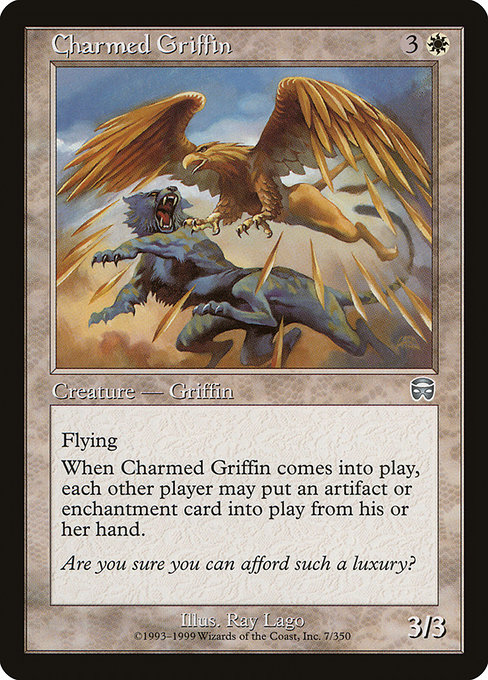 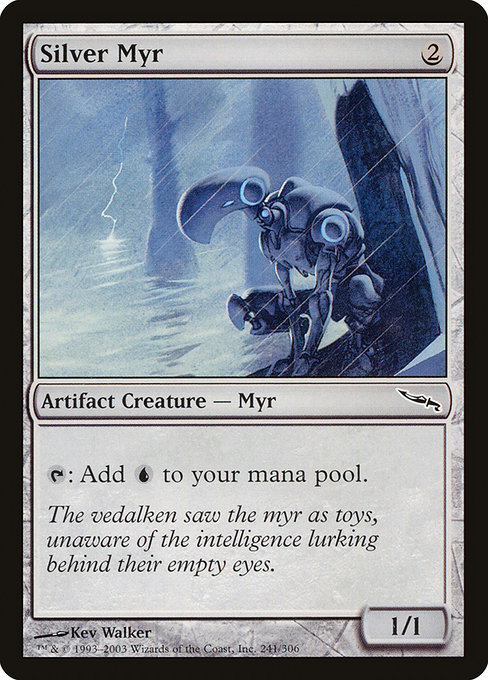 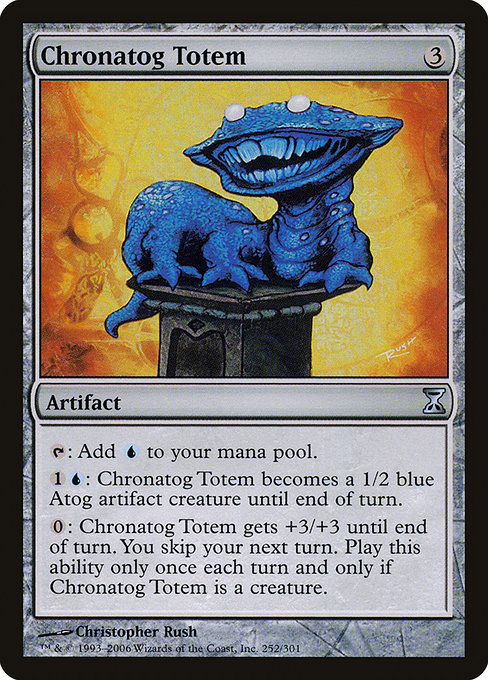 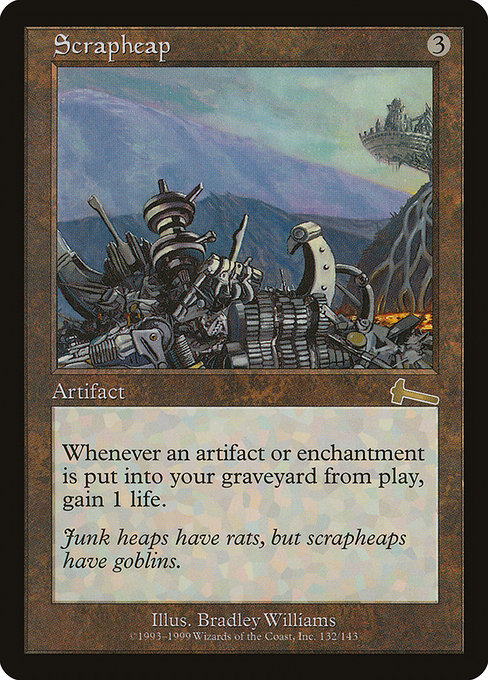 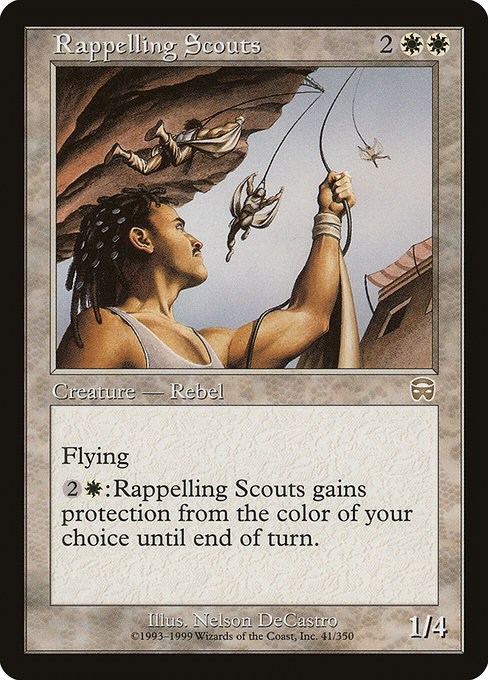 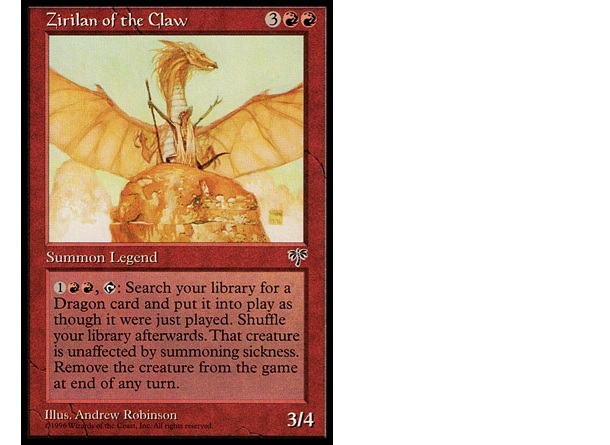 Zirilan does some pretty sweet stuff, but as with Myojin of Cleansing Fire, to justify running him as a Commander I need to find a job that he's the best at. Zirilan tutors for Dragons for a turn, but Scion of the Ur-Dragon does that while giving you access to more colors and dealing commander damage.

The most obvious benefit that Zirilan offers is that, unlike [card Scion of the Ur-Dragon]Scion[/card], he actually makes his Draconic friends enter and leave the battlefield. Still, while Bogardan Hellkite is pretty sweet, it's not going to make up for loosing out on four colors. The only real way to turn that into a downside is to run stuff like Ruination and Price of Progress, and I'm certainly not planning on doing that.

Zirilan's biggest advantage is that he can bring out multiple Dragons. Sure, Scion can turn into more than one Dragon in a turn by responding to his own ability, but Zirilan can actually make use of multiple creatures provided you can untap him. Even without a way to untap him, activating Zirilan during the end step of the turn before yours and then on your turn will allow you to attack with two Dragons at once.

To capitalize on Zirilan's ability, I first looked for Dragons that had synergistic abilities to attack together with but came up short. Defeated, I skimmed the list of Dragons within Zirilan's color identity and absentmindedly added Dragon Tyrant to the list.

I don't like the Tyrant in Scion deck because he just leads to Commander damage kills, but here he should just attack for a lot without making you pay his upkeep. On top of that, the 18+ damage he represents as early as turn six can come out of nowhere.

After I finished going through, I looked back at the candidates I'd pulled out and as I scanned past Draco, I thought again about [card Zirilan of the Claw]Zirilan[/card]'s ability to bring two Dragons out of nowhere. And an idea hit me: I could build the deck to swing for huge amounts of unexpected damage! I proceeded to tap the best of the best for inclusion: 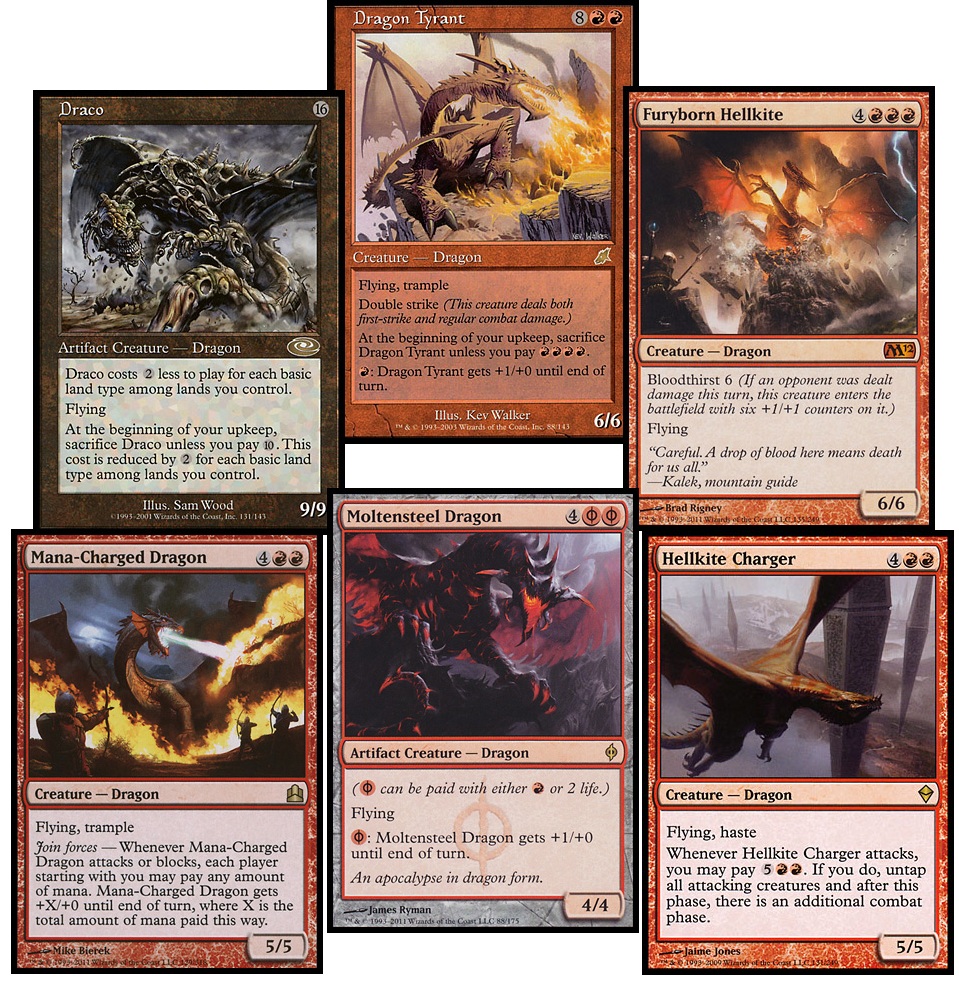 Great! Now all I have to do is figure out what sort of deck wants this type of sudden damage. My first thought was aggro, but not only is that sort of pressure hard to maintain in multiplayer, it doesn't make very good use of Dragons you draw or Zirilan's tutoring capabilities.

To take advantage of those benefits, Zirilan needs to play control, but it also needs to soften up the competition.

Luckily, this lizard again provides his own solutions. Balefire Dragon and Steel Hellkite will act as removal while dealing some damage, and Bogardan Hellkite and Fire Dragon allow Zirilan to play like [card Visara the Dreadful]Visara[/card] while still getting an attack in if you grab them on your own turn or don't need to grab them until the end step of the turn before yours. On top of that, Dragon Mage and Knollspine Dragon can net you more cards than Red typically ends up with.

The issue with all of these options is that you have very limited access to these effects because of the scarcity of similar cards, which means that getting them exiled by Zirilan's ability isn't going to cut it.

Thankfully Zirilan doesn't work like [card Dregscape Zombie]Unearth cards[/card] do, so we can reuse the Dragons with a little bit of extra effort.

Out of the Loop

Ultimately we need to get Dragons back into our library, but Mirror of Fate hardly seems like the solution. The easiest zone for Red (or rather, colorless) to get cards into the library from is the graveyard. And, luckily, it's not too hard to get creatures on the battlefield into the 'yard either. 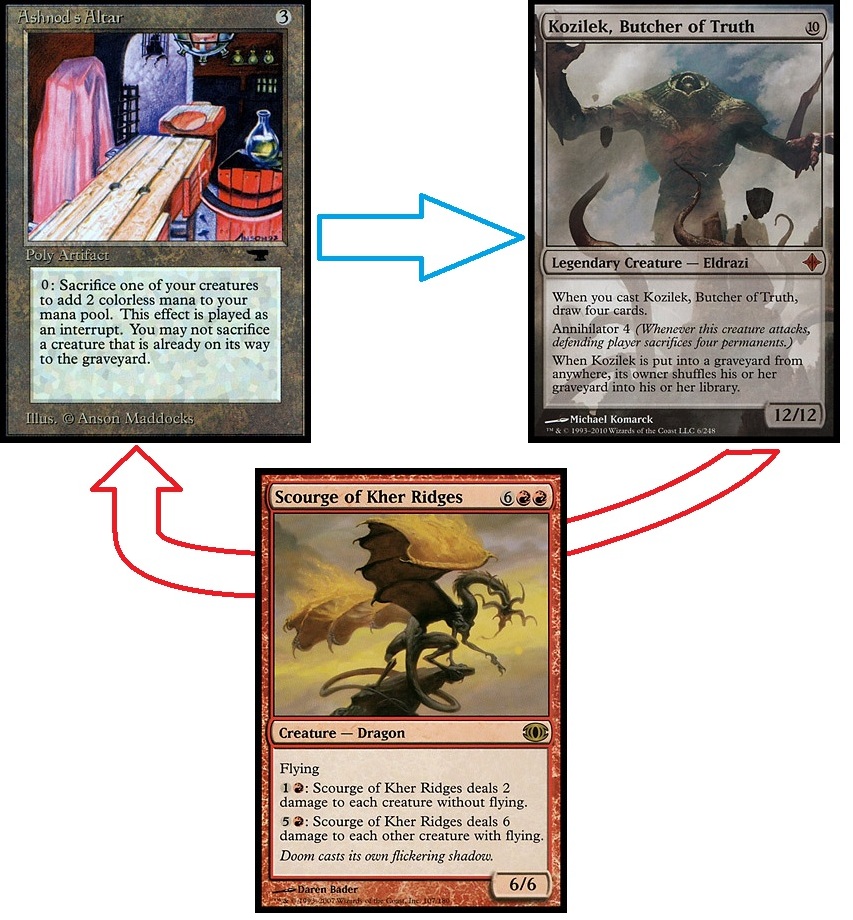 Of course, requiring more pieces to start doing things entails greater difficulty in getting started, but if you really need to keep a particular Dragon around, you can always get it before your turn and subsequently search out a Predator Dragon to feed it to.

With a bunch of sacrifice effects already in place, we even get to include hits like Hoarding Dragon that don't do much with Zirilan on their own. And he'll let us convert mana into [card Miren the Moaning Well]life[/card] or [card Blasting Station]damage[/card].

The list up to this point does a good job of swinging with two dragons on demand after acting like a Red [card Visara the Dreadful]Visara[/card] deck for turns on end, but, as I mentioned earlier, we can squeeze a bit more value out of this particular Viashino.

As a Foil Addict™, I've been accruing cards that I thought I would put to use in Commander, and the group I'm most surprised to see languishing outside of a deck is the untappers.

Lots of Legends have tap abilities and it seemed only natural to me that Thousand-Year Elixir, Magewright's Stone, and Thornbite Staff would see the light of day. This is certainly the time for it, as Zirilan's even been errataed into a Shaman!

Even though this dragonspeaker doesn't offer Blue's trickery, the most passionate of colors offers not one, but two forms of untapping. While not an ideal untapping mechanism, Grab the Reins certainly does its job.

Still, the more exciting way to untap our new favorite lizard is via Relentless Assault. What's better than getting another use out of Zirilan? Getting another attack out of the first [card Firebreathing]Firebreather[/card] he searched up!

I'd leave you here, but if you've read my prior Commander-related ramblings, you'll know that this deck, despite all of its cool interactions, is missing its most vital piece: Mana.

Playing Mono-Red affords us a few interesting options, such as Valakut, the Molten Pinnacle and Scrying Sheets, but the real benefit lies not in the lands, but in the ramp.

Mono-colored decks of all stripes run explosive mana doublers like Caged Sun, Extraplanar Lens, and Gauntlet of Power. While Red may not give us Cabal Coffers or Vernal Bloom, it does offer Gauntlet of Might. 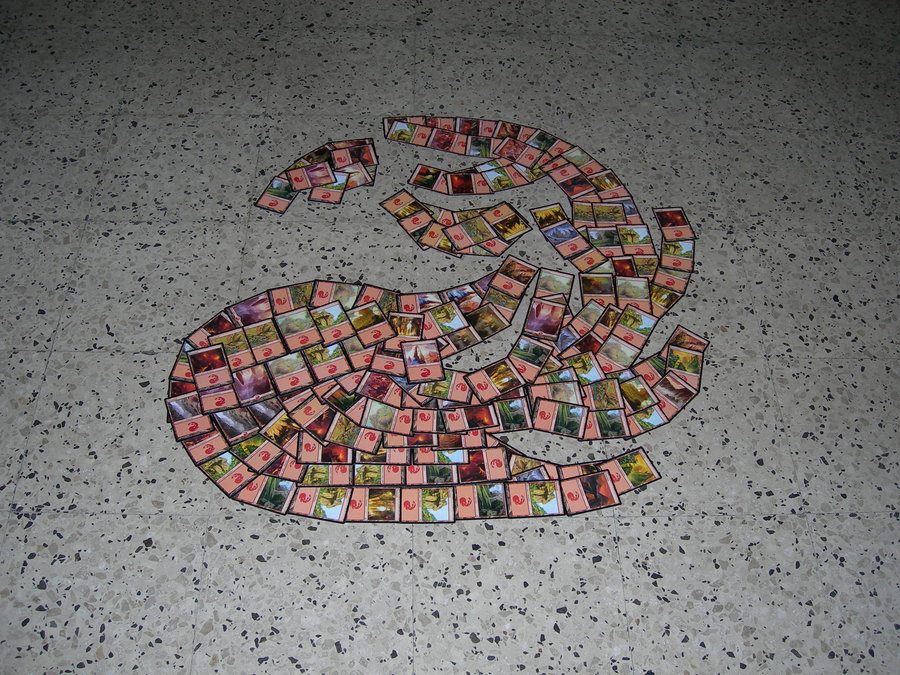 Shamelessly stolen from NonoKraken on deviantART.

Such a Mountain of Red mana enables [card Zirilan of the Claw]Zirilan[/card]'s shenanigans and goes a long way toward making the deck's Dragons lethal. On top of that, it takes an awful lot of mana to attain a sizable Dragonstorm count.

Wrap it all together, and:

Flowers of the Oasis

Well I guess that's the end. You may see me back for an extra article sometime, but this was my last regularly scheduled piece for Quiet Speculation. I'll certainly miss writing here, but I'm looking forward to seeing all of the things this coming year brings, both for myself and for this website.

As always, I'd love to hear from you, but for now I'll just wish you a happy new year!