In the midst of the Dark Ascension pre-release hype, we mustn’t lose sight on the other significant shift in the MTG competitive scene. The beginning of Modern PTQ season has arrived! And what a diverse metagame we now have!

After multiple iterations of bannings, Wizards has finally created a diverse eternal format where Force of Will isn’t king. This is an exciting time, where creative minds can brew up wild strategies that may actually have a shot at winning.

Now that the first handful of tournaments is completed, I want to take a first look at the winning decks in order to identify potential pick-ups.

Here is a breakdown of the winning Modern PTQ decks from Wizards’ website:

Talk about diverse! All five colors are represented, though only one of them legitimately relied on Green. Black is likewise somewhat underrepresented here, but this is probably an improvement versus the previous metagame where black was a nonfactor completely.

And how about the disappearance of Zoo? The banning of Wild Nacatl has completely handcuffed the Naya version of aggressive decks, opening the door for some much more creative strategies.

While I wish I could continue on about how much I love Modern’s evolution, I need to turn my attention to the financial implications.

The [card Arcbound Ravager]Ravager[/card] in the Room

The resurgence of Affinity has thus far been noteworthy. No one should be particularly surprised by this since an Affinity Modern deck is not a novel idea. Something can still be learned from its recent success, though – Affinity cards are worth trading for. 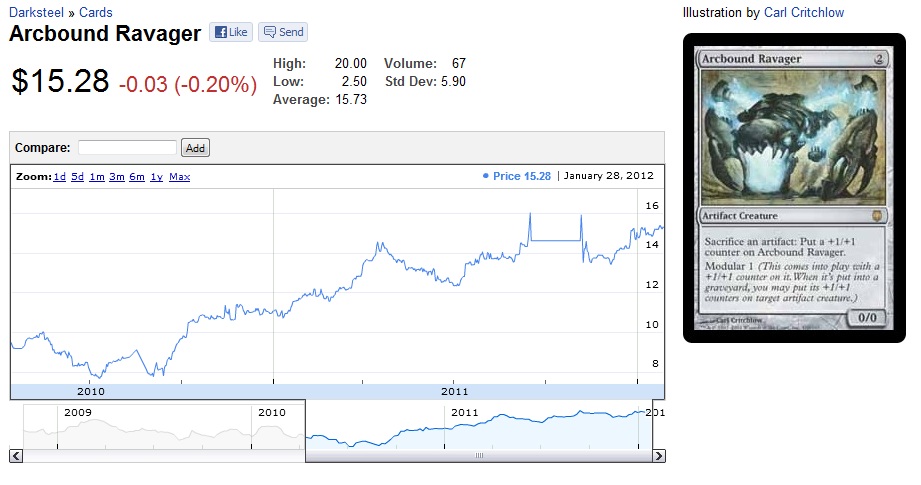 A quick look at the trend of Arcbound Ravager (chart courtesy of blacklotusproject.com) reveals just how lucrative Affinity cards have become. I remember enthusiastically selling my set of Arcbound Ravagers to Star City Games when they were buying them at $10 each. Months later, the buy price has not changed, but it is interesting to note that Star City Games has increased their sell price to $22 each!

While I don’t expect you to find people who will trade Ravager at $15 so easily, there may be some other profitable Affinity cards. Consider, for example, Etched Champion (chart courtesy of blacklotusproject.com): 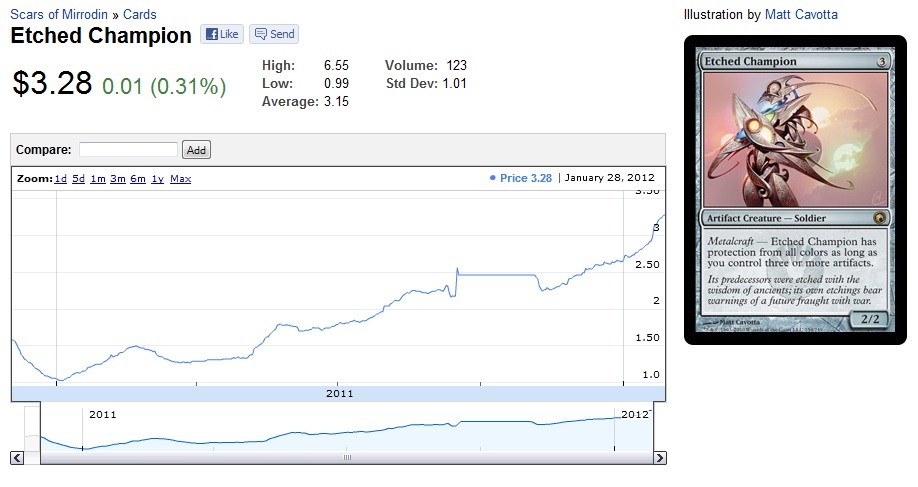 This card has had quite the run and, to be honest, I had no idea until recently. Actually, I counted many Etched Champions in people’s trade binders at the latest FNM. Many people will still trade these near bulk prices since they have significantly fallen out of favor. While I would not rush to eBay to purchase 50 of these, I certainly see merit in trading for a handful.

One other noteworthy card I want to identify is Mox Opal. While this one has not rebounded as significantly, it has finally found a reliable and well performing home in an eternal format. This means that Standard rotation won’t hit this card’s price nearly as much. The time may not be perfect to move in on this card, but I would have a hard time seeing it drop below $12 in the long term.

Years ago, I tried my hand at a PTQ and was promptly stomped on by an array of Boros Decks. The Red/White combination, implementing efficient creatures and removal spells, is frequently a deadly one.

Value-wise there are a number of rares played in the deck, but very few are worth more than $10. One of the winning lists ran two Elspeth, Knight Errants, but this particular card has already been on speculators’ radars. Even the Dual Decks version with the arguably inferior artwork has stabilized over $10. If you can find anyone looking to trade these away at the now-obsolete price of $12, it wouldn’t be a terrible idea to pick up a few.

Many of the popular Boros cards were, in fact, printed multiple times. Figure of Destiny was a promotional card and Grim Lavamancer has a reprint.

I am, however, turning my attention to a different one-drop creature (chart courtesy of blacklotusproject.com): 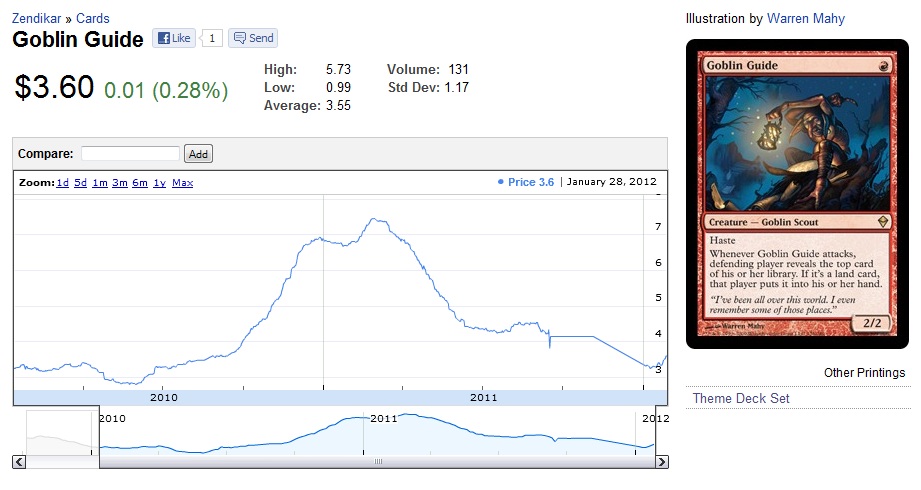 Goblin Guide is an ubiquitous card. It has shown up in aggressive Legacy decks, it was a Red Deck Wins staple during its time in Standard, and it is even a casual favorite. Now the Goblin Scout can add a new line item to its resume – success in a winning Modern deck.

Thus far, this success has barely altered the card’s value. Recent prices are still averaging near the card’s lowest. This could be a wise time to buy in here. Standard players who never unloaded him before rotation may be willing to trade these at discounts, while Modern players will be looking for this 4-of staple for their Red Aggro decks.

I want to mention one other card both relevant to Affinity AND Boros – Ethersworn Canonist (chart courtesy of blacklotusproject.com): 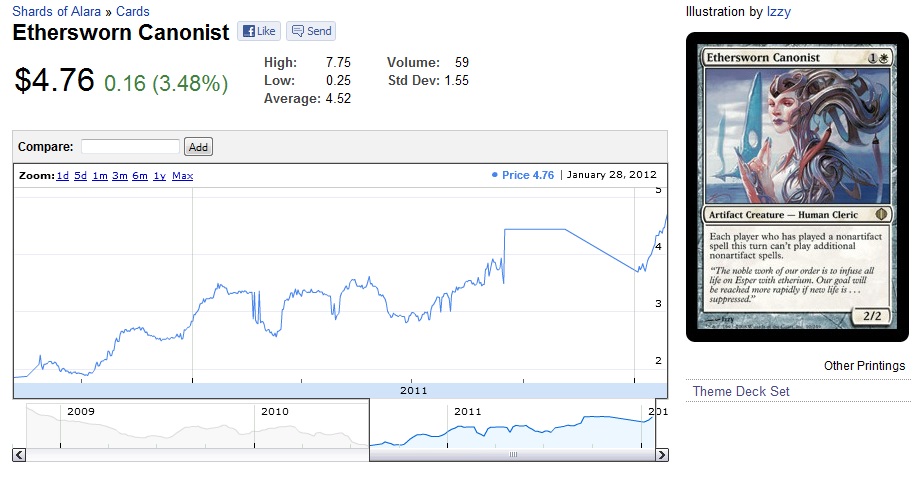 This card has been on such a run recently. I’ve even seen it on a MOTL buylist upwards of $4.50! This two mana Hate Bear, along with the likes of Gaddock Teeg, have both seen a nice increase. Both are excellent sideboard tech to combat control decks and the Past in Flames combo deck. Additionally, Affinity can only stand to gain from main decking the Canonist.

Hate Bears have always had an invisible price ceiling. The Canonist has been in this price range before, and so it is difficult to say if its momentum will take the card’s value to new heights. Star City Games seems to think so, as it is currently selling Ethersworn Canonist at $7! Certainly this is a Modern card worth watching.

The Remainder of the Field

It seems I am already nearing the end of my article, and yet I have only managed to discuss financial implications of two decks!

Melira Pod, the Modern deck I am currently piloting, has won one PTQ so far. Blue control decks have also finally surfaced as well. Either in the form of Fairies, combined with Black for Dark Confidant, or combined with Isochron Scepter for some recyclable counterspells.

While it is tempting to immediately jump on the cards that made these decks win, their sustainability in this Modern metagame is still undetermined. I am holding back my initial reaction to scoop up sets of Isochron Scepters, although they are a fun casual card and I’d love to see them win more PTQ’s... but I need to exercise discipline, however, and keep emotion out of the equation. If I stumble upon an Isochron Scepter or a Birthing Pod in someone’s trade binder, I may try to pick it up if the price is right.

There are many more Modern PTQ’s to come, not to mention a couple Modern Grand Prixs later in the year. It looks like we finally may go three months without Modern bannings, but that does not imply that the Metagame has settled.

Some hyped decks have not broken out quite yet. Merfolk builds have been discussed at length on Twitter but the deck’s success has yet to be proven. Likewise, the popular Martyr of Sands has yet to break out despite causing the price of Proclamation of Rebirth to jump up five-fold. 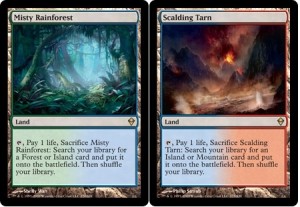 I am going to maintain respect for this uncertainty – I will casually be trading for some of the cards in these breakthrough brews, but I will not be aggressively buying them.

The only cards I am strongly behind are the tried and true: Zendikar Fetch Lands.

People are STILL selling Misty Rainforest and Scalding Tarn for $10. These cards are even better than $10 bills – they will likely increase in value while $10 bills will decrease due to inflation!

4 thoughts on “Insider: Modern Season Is Upon Us”