Although my articles usually focus on Standard, this week I'm taking a break to talk about Sealed. Sealed is becoming more and more important. In addition to the awesome and ever-present Prerelease and Sealed PTQ season, we are starting to see more and more Limited Grand Prix.

Sealed always has been (and probably will be) my favorite format. I love the even playing field that six unopened packs puts all the players on. Would you rather compete against professionals with decks each of you built, or with a random assortment of cards? Personally, I prefer the latter.

In addition, Sealed stays fresh and interesting through repeated play. Every sealed event you enter presents a new deck-building puzzle to solve. With most sealed pools there are multiple decks that can be built. Each player sees the pool differently and it is quite interesting to talk about the merits and flaws of different options.

Some of my friends wonder how I can afford to travel so much. To begin with, I keep costs really low by splitting the hotel and gas with two or three other people. If you have not road tripped for Magic before, I definitely recommend giving it a try. Its not as expensive as it may seem and its always a blast! (As for ways to pass the time, I highly recommend Magic-themed Twenty Questions.)

My sealed pool for Day One was interesting and difficult to build, which is actually what inspired me to write this article in the first place. I used up almost all the allotted time to settle on the final build and agonized during my bye over whether I made the right decision or not.

Take a look at what I opened:

Looking over the sealed pool once more, I realize now that there are probably a lot more possible builds than I thought of in Nashville. There is definitely a lot going on in these six packs so I'll take a moment to break down how I approached it. 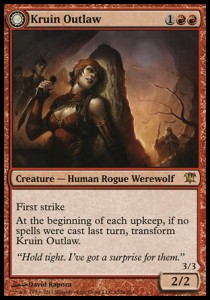 The first thing I register is the artifacts. This is important because it lets me see which cards I am most likely playing in any deck I build.

These cards are not set in stone, but many times there are a few I know I'll play for sure. Blazing Torch and Geistcatchers Rig are two such cards, as they are excellent removal. Whatever deck I play, these two cards are almost certainly making the cut.

Scanning through the colors, I was immediately drawn to red.

At the Innistrad Prerelease, I had Kruin Outlaw // Terror of Kruin Pass in my deck and it was very hard for players to deal with. Add Hellrider and Fires of Undeath to the mix and I was on board. Red had some other good creatures like Rage Thrower and Markov Warlord which are both good at finishing off opponents.

I could pair the red cards with green. This allows me to play Wild Hunger and Immerwolf, who will pump a large number of my creatures.

Avacyns Pilgrim provides acceleration and enables the flashback on Travel Preparations. With Dawntreader Elk and Evolving Wilds, I can even splash black for the second half of Fires of Undeath and maybe even Tragic Slip and Farbog Boneflinger.

This deck is not bad and I would not fault you for playing it. There will be some games that you win off of a fast start your opponent cannot recover from. However, this version did not sit well with me as it felt like most of the cards were underpowered. Sure, the two red rares were amazing but beyond that it felt lackluster.

My final decision to play a different deck was based on two things.

The first reason I did not play this version is a matter of personal preference. Over a long event like a Grand Prix or Star City 5k, I prefer a deck that is going to be consistent. I could have made the deck's manabase more consistent by cutting Black but I thought the resulting deck would be too low in power.

The second reason was the lack of more removal spells like Geistflame and Brimstone Volley. Without lots of removal this deck risks stalling out. Few of your creatures have evasion and most of them are easily answered by any removal spell or a three-toughness creature. You can't just rely on drawing Gatstaf Shepherd // Gatstaf Howler and Kruin Outlaw // Terror of Kruin Pass every game.

Rage Thrower helps out in this regard by making blocking difficult but he isn't really enough to fix the problem by himself. Ultimately I felt that this deck wasn't quite there, but even with just one more piece of removal I probably would have played it.

Back to the Drawing Board 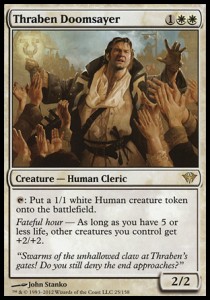 So what did I end up doing? Why, playing none of those colors of course.

My white cards had synergy, evasion, removal and some really powerful spells. Thraben Doomsayer in particular was very powerful and every game I untapped with him I won. Usually I got three tokens out of him before he died. His Fateful Hour ability never came up but I assume that when it does you just win the game.

Once I decided to play white I had to determine which color to pair with it. At first, I wanted to risk the perils of an insane manabase and play White-Red-Black.

Think about Thraben Doomsayer and Hellrider in the same deck! Now add a couple other double-white and double-red spells and some Black mana to flashback Fires of Undeath. When the mana worked I most likely would have won, but I'm pretty sure I would have lost more games to bad mana than I was willing to give up.

Another reason to stick to two colors in this format is the often overlooked Haunted Fengraf. This land impressed me quite a bit and I plan on playing it more in the future.

In a two color deck, one colorless land will not significantly hinder your ability to play your spells. As it doesn't take up a spell slot, this makes the raise dead effect essentially "free".

In my deck that meant getting back some juicy targets like Avacynian Priest, Fiend Hunter, and Thraben Doomsayer. Being able to return high impact cards like these drastically increases the power level of your deck. You do have some control over when to fire it off as well, so if necessary you can pop it early to guarantee it gets your best creature.

In light of all this I took a look at the Blue. Initially I had dismissed blue as unplayable because there were not enough cards. But when building a sealed deck it's important to reexamine the cards available to you and consider each of your options carefully.

Blue may not have been deep, but it did have half a dozen excellent cards and would also allow me to play Drogskol Captain. Hmm, so I have spirits to synergize with the captain and humans to complete the loop with Dearly Departed. Blue-White tempo had been quite good to me in this format and I wondered if I could make it work.

I laid the following list out on my table and stared at it deep in thought for a full five minutes.

What did this deck do well? It had enough evasion and removal to form a solid base. As for bombs, Dearly Departed, Thraben Doomsayer, and Ludevics Test Subject would definitely win some games on their own.

The deck's curve is also quite good. There are enough creatures at each mana cost to impact every turn of the game. Mana curve is extremely important to me in this format and I value it above almost anything else. There were even relevant sideboard cards in Dissipate, Ray of Revelation, and Saving Grasp.

The Moment of Truth

I made my final decision to play the Blue-White deck with one minute remaining in the build time. After losing the first round, I began to have reservations about my build, but the rest of the tournament would prove that I made the right decision.

My first loss was ultimately out of my control. I was well in control in game one when I noticed my opponent counting something. I assumed he was trying to figure out how to kill me with some combat trick but I knew he could not.

What he was actually counting turned out to be the cards in play, in my hand and in my graveyard. Soon after that I lost to the dumbest card printed in a long time, Increasing Confusion. Losing to that card felt like losing to Phage the Untouchable. It was dirty and cheap and I really would prefer it hadn't been printed.

I lost game two because I failed to draw a third land at any point in the game after keeping a two-lander.

As I said above, the rest of the day went better and validated my deck choice. The only other round I lost was in three pretty close games against an Esper deck (which turned out to be a common way to build your sealed deck.) It wasn't much of a blowout, and a small change in any of the games could have easily swung the match.

Overall the deck performed well and gave me a lot of room to outplay my opponents. There were a lot of decisions involving different lines of play and the deck could switch between offensive and defensive very easily. I am glad I ended up playing this version as I do not think I would have done as well with the other builds.

Unfortunately Day Two did not go as well. My draft was one of those corner-cases involving crazy packs. For instance, I remember one of the packs in particular messed things up because it had literally eight red cards. Oddities like that seem to happen a lot in this block and I don't like how it messes up drafts.

I hope you enjoyed my Limited adventure as much as I did. Feel free to post your build of my pool below and comment on mine. What would you have done differently? Would you have played the same deck I did?

Unleash the Force on Limited!

One thought on “Sealed at Grand Prix Nashville”