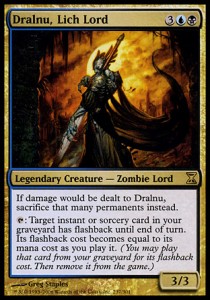 After taking a week off to recover from some kind of plague I had contracted, I'm excited to be back digging through my mail. This week I'm going to take a look at an email from Joe, who is generally an aggro player and wants to build a control deck for Commander. Since most of his other decks are combinations of green, red and white, he wanted this deck to be based in blue and black. From the available Commanders in those colors he picked Dralnu, Lich Lord.

I'm excited to work with Dralnu, especially given the return of graveyard enablers and engines in Innistrad block. Besides the new toys you get to play with, there are also old standbys like Fact or Fiction that become even more absurd with flashback.

The problem with this style of deck is the lack of access to white wrath effects like Austere Command. The issue is twofold. Not only do you frequently get stuck trading one-for one, you also can't answer artifacts or enchantments that hit the table.

Your mana also gets more stressed against multiple players. You only get to untap once per turn cycle, but you may have to cast three or more counterspells or removal spells during this time. This means it's important to develop your mana consistently over the course of a game.

The biggest issue I foresee for this deck is finding a suitable win condition. Most Dralnu decks play every available Time Warp, which is certainly powerful, but I just don't enjoy those effects in multiplayer formats. Cards that effectively read "Each other player skips their turn" will not make you friends and instead get you hated off of a table.

Let's do things a little differently this week and start with the manabase that can support a heavy control deck:

Getting Control of Our Mana

People have invested a lot of man-hours into solving the question of Constructed mana bases. People have figured out how many lands are needed for different styles of control and aggro decks, and we can apply those same principles to Commander. Blue-black control decks in standard play twenty-six or twenty-seven mana sources these days, which is about the same as forty-three sources in a ninety-nine-card deck. This deck is probably going to play a few more than that once we add in the acceleration.

Let's start with the lands: 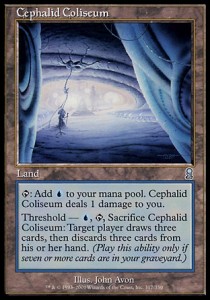 This is a pretty straightforward mana base with a reasonable number of dual lands and a ton of utility.

Hall of the Bandit Lord and Winding Canyons help you get an activation out of Dralnu before he gets killed, while High Market helps protect Dralnu from burn spells that will put you completely out of the game.

Cephalid Coliseum is exciting in this deck as a cheap cantrip that fills your graveyard and digs for countermagic. Nephalia Drownyard and Duskmantle, House of Shadow also help to fill your graveyard, but they also randomly disrupt tutors like Enlightened Tutor and double as win conditions in slow games. Each activation of these lands is like drawing a card and keeps you from running out of gas in the late game.

The big hurdle to overcome is that you can only activate Dralnu once per turn cycle. Minamo, School at Water's Edge is awesome for this deck since it gives you another activation and even a third with Deserted Temple. This card is usually the first tutor target for Tolaria West. 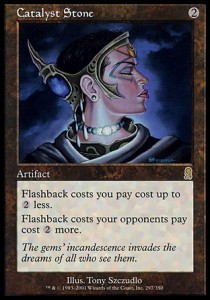 Supplementing the thirty-eight lands in this deck, here we see two kinds of acceleration.

First, there's the cheap acceleration to get your shields up early. Second, there's ramp that generates a larger and larger mana advantage over the course of a game. Things like Crucible of Worlds and Everflowing Chalice get better the longer a game lasts.

Catalyst Stone is a subtly sweet find for this deck. It doesn't do much until you find Minamo, School at Water's Edge, but at that point you start netting more mana every turn.

Crucible of Worlds is really important for this deck's engine. You're going to put a lot of cards into your graveyard, and then you have this interesting interaction between Petrified Field, Buried Ruin and Crucible of Worlds. This combination lets you recur first a Crucible of Worlds, then any land or artifact that's been destroyed or milled during the game. While this engine is slow, it's difficult to break up and sets up one of the sweeter win conditions I found.

You may have to read on to find out... For now, let's delve into the heart of the deck. 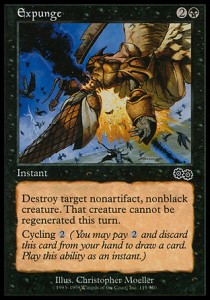 Blue-black control is traditionally based on countermagic and creature removal. The key here is to find counterspells and removal that do one of several things. You want them to be incredibly mana efficient so that you can fight over multiple things each turn cycle. You also want them to replace themselves or generate some kind of advantage instead of trading one-for-one. Last, you want them to have synergy with Dralnu beyond just being really good to cast twice.

I'm pretty confident that the suite of spells I've settled on accomplishes these three things pretty well. Let's start by looking at the creature removal:

Dominate is a great example of this. The effect is powerful but also extremely mana intensive. You can't afford to leave up a ton of mana for Dominate unless you can also play other spells when the situation calls for it. Otherwise you may end up doing nothing at all, which can be a huge blow to your tempo.

There's a lot of cheap removal, like Ghastly Demise and Snuff Out, that let you play multiple answers without stressing your mana. You also have flexible removal like Rend Flesh and Sever the Bloodline.

The two most exciting cards out of these are the ones that play well with Dralnu-- Life's Finale and Expunge. Expunge is just straight up value with Dralnu as your general. It cycles to fix your draws early and flashes back as a removal spell when you need one. What more could you want?

Life's Finale is sort of the opposite of Expunge. Where Expunge is efficient and flexible, Life's Finale crushes some decks out of the game. Take a second to think about how many of your decks fall apart when you lose your six best creatures. If you target the same opponent twice you can get rid of their best recursion pieces or late game bombs.

The counterspells are the second half of the suite of answers. The same principles apply to counterspells as to removal. You want counterspells to be flexible, cheap, synergistic, and to replace themselves. Fortunately, a number of counterspells combine several of these requirements.

Notice how many of these counterspells either put spells on the bottom of their owner's deck or exile them. This kind of effect is important given the prevalence of recursion in the format.

You've got a suite of more expensive counterspells that do cool things: Dismiss, Cryptic Command, Rewind and Scattering Stroke. Scattering Stroke in particular is a card that I wish saw more play. People play expensive counterspells with marginal upside all the time, and Mana Drain is absurdly powerful even costed at four mana. If this gets to drain them even half of the time, I'll be ecstatic! 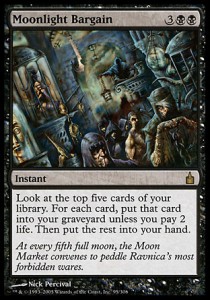 Once you've figured out of the suite of answers you're playing, the trick is to tie it all together. What cards set up a graveyard engine and generate card advantage without being clunky early? The way I resolved this was with a large number of cantrips and powerful draw effects, especially ones that set up your graveyard.

The first set of cards are all sweet cantrips that have seen play in a ton of formats. These cards help you sculpt your draws early, dig for answers later and set up your graveyard for flashback shenanigans. You even get to flash these back later in the game for more value. They let you look at so many cards that you can easily find singleton answers even in a ninety-nine card deck.

The next suite of cards are tutors and draw spells. Entomb and Intuition are insane in this deck, effectively [card Demonic Tutor]Demonic Tutors[/card] with upside. Similarly, Fact or Fiction and Moonlight Bargain are even better in this deck than normal. You get to dig five cards deep, keep all of them, and cast the best ones twice!

This is the part I was most concerned about when building the deck. It seems like it's going to be difficult to stick a threat, given that you need to leave up so much mana and dedicate so many cards to what your opponents are doing. That said, I found a sweet set of cards that threaten to end the game quickly once you find an opening to cast them.

The first interaction to be aware of is the one between Teferi, Mage of Zhalfir and Mystical Teachings. First you tutor up Teferi with the front end of teachings, and then you tutor up a bomb like Grave Titan with the second half and flash it in on someone's end step.

Your second option is to steal someone else's win condition with Twincast and Reanimate, both of which are incredibly efficient. You can easily cast a threat that costs six to nine mana for one or two while leaving up the rest of your mana for counterspells.

I'm most excited about this win condition though:

Pike has made an impact in both Standard and Vintage and it's just as powerful here. You can easily set up game states where you can two-shot people with Dralnu, and first strike means you won't have to sacrifice permanents. It's not even that out of the question to one-shot someone. You won't be able to do it until late in the game, but it's definitely not something that people are going to expect.

With that out of the way, here's the finished decklist:

Overall, I'm happy with how this turned out. I think the deck errs a little more on the control end of the spectrum than I'd like, and after playing some games with it I'll probably cut some answers for more midrangey threats like Meloku the Clouded Mirror. It's likely the deck also wants more untap effects for Dralnu and a big mana engine such as Cabal Coffers or [card Urza's Tower]Urza lands[/card]. As a starting point though, I think this is a great place to be.

Next week I'm going to take a look at a color combination I've never built before! We'll be working with Edric, Spymaster of Trest and trying to build a tempo deck for this Timmyest of formats. Be sure to check it out!