Avacyn Restored hits the shelves this Friday, and like so many other players I can't wait to unravel its mysteries. At the top of the list of questions to resolve is the matter of a new mechanic that has the Magic community buzzing: miracle.

Lets see if we can analyze this mechanic to get an idea of its power level and likely impact on Magic. To start, I'll look at several miracle cards separately and address their playability across various formats. Then I'll talk about the mechanic as a whole. 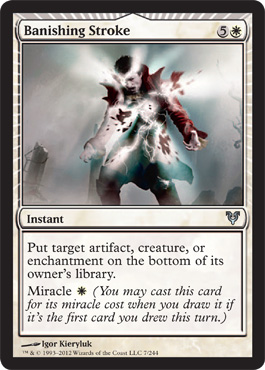 Banishing Stroke is quite versatile and reminds me a lot of Maelstrom Pulse. When you miracle it you can get rid of whatever is troubling you for the low cost of one mana. Later in the game, six mana is not really much to ask for this effect and its clunkiness is mitigated by its being an instant. I could see this being played in Standard, Modern and Legacy. 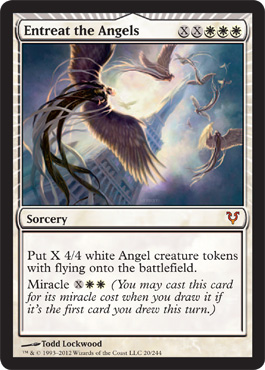 When I first saw Entreat the Angels, I dismissed it because I compared it to White Sun's Zenith and similar cards. X spells that make creatures haven't seen a lot of play in recent formats. After some reconsideration though, I began to see Entreat the Angels as more powerful than its predecessors.

Look at it from the perspective of mana cost. For three mana, you get a 4/4 flier at bargain bin price. Four mana gets you two fliers and five gets you three. The key here is that at every point on the curve, a miracle-cast Entreat the Angels is undercosted. Even if it gums up your hand for a while and you have to hard cast it, seven mana for two angels is a reasonable deal. Though its place is not guaranteed, I expect this to impact Standard. 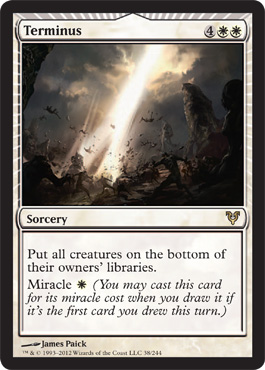 At one white mana this certainly puts Hallowed Burial, a constructed card in its own right, to shame. Even at six mana this effect is reasonable for a control deck.

Honestly, I'm a little puzzled as to how this made it through design as such a cheap sweeper has never existed before. My worry is that this effect is too powerful in a control deck that will no longer have to use all their mana to clear the board. Now they can just set this up with Ponder and still have mana available for other controlling spells.

This may also fit into Delver of Secrets // Insectile Aberration decks, because they can kill a couple problematic creatures like Strangleroot Geist or Geralf's Messenger and still have enough mana to play another threat in the same turn.

Terminus could easily see play in Standard, Modern and Legacy. 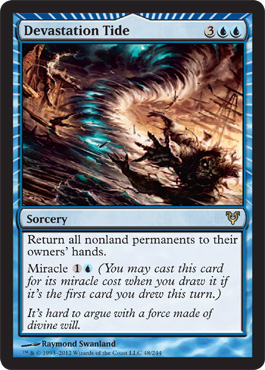 Evacuation is a powerful effect and the miracle cost here is a giant discount. Devastating Tide effects both players but most of the time if you're playing this it will benefit you more than them. It's hard to predict whether an effect like this will see play. I would say that it depends a lot on the format and which decks are popular. It’s possible that it will see play in older formats but I think Standard is likely to be where it shines (by which I mean, of course, makes me miserable every time it is cast). 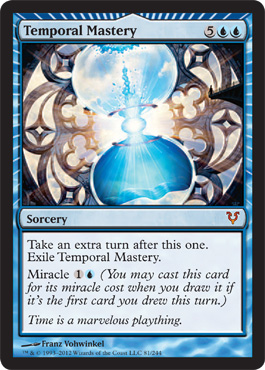 Seven mana is a lot if you miss the miracle cost, but Temporal Mastery is so powerful that it will certainly see play. I think the real home for this card will be Legacy because it can always be exiled to Force of Will. In case you needed more convincing, you even get Brainstorm to set it up. Miracles definitely get better in Legacy because of this interaction. It will see some play in Standard and Modern also. 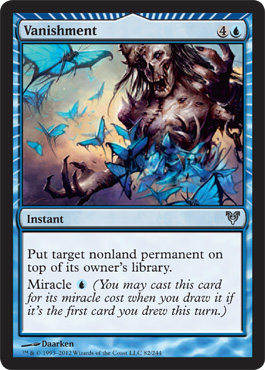 Just in case Vapor Snag needed companionship or competition, we now have a one mana bounce effect that puts not just a creature, but a permanent on top of the library. Since Mana Leak will be less effective due to Cavern of Souls, I could definitely see Vanishment making an appearance or two. I would imagine that Standard, and maybe Modern, may have some decks that would play this card, but probably not in Legacy. 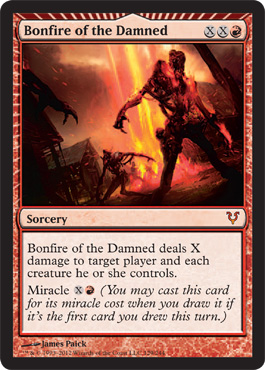 Bonfire of the Damned is harder to evaluate than most of its brethren. My first impression is that this will be influential in the Standard metagame. In any match characterized by creature combat, this card will break the game wide open. It's unclear whether it will be a main deck card or strictly sideboard, but it should see some play. It won’t be powerful enough for older formats though. 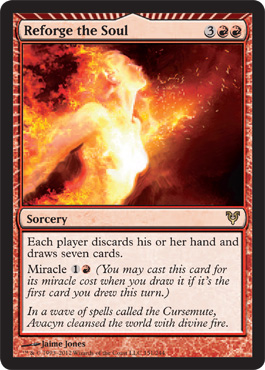 As blue gets Time Walk, it makes sense that red should get Wheel of Fortune. Since we're playing fair, the red spell should get a mana discount as well, right? Well, no, not really. A two mana draw seven seems really dangerous to me. There is a reason that Wizards has not printed draw sevens very often and that is because they make broken things possible. There are a lot of cards that want your graveyard filled, and Reforge the Soul helps you do that while giving you more cards to work with. Even the five mana retail cost is reasonable enough that this should definitely see play in Standard. This effect is also powerful enough for Modern and Legacy, if it can find a home. 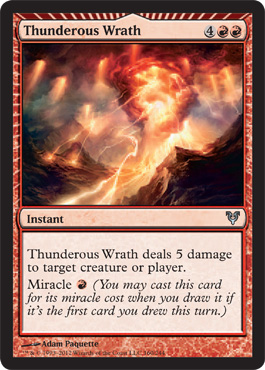 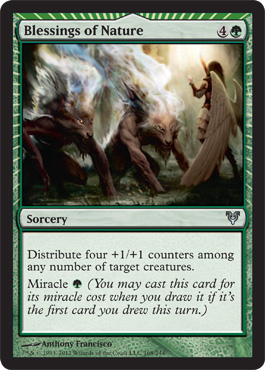 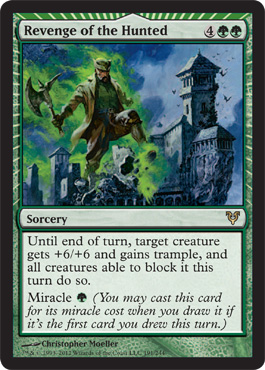 Blessings of Nature and Revenge of the Hunted provide similar effects. One grants you the ability to distribute four +1/+1 counters to any of your creatures. The other gives a temporary bonus of +6/+6 to one creature but also lets that creature gobble up your opponent's army. These cards are being talked about as boosting effects for the poison creatures from Scars of Mirrodin block, which is the only place I think they will see play. There's no place for this effect in Legacy or Modern.

Miracle as a Mechanic

Miracle was designed to occasionally get you out of situations that normally spell certain doom. There are many times in Magic that we fall so far behind that we know there is no chance. Usually we concede defeat and move to the next game. Miracles aim to reverse this situation and give players a shot at pulling back into a near-hopeless game.

I am unsure that things will actually play out this way in real games. Most of these cards have effects that are better at keeping you ahead than catching up.

Like most cards with alternate casting costs, this mechanic also comes with a drawback, in this case an abnormally high regular cost. In Standard and Modern this is a real issue. In these formats the only way you can mitigate the disadvantage of miracle cards is by paying the full cost or discarding them with something like Faithless Looting. When including miracle cards in a deck, it will be important to have a plan for what to do when they get stuck in your hand.

I am glad that there are no commons with miracle because they would be unbalanced in Limited. Uncommons, rares and mythics will make it so we won’t have to see them so much. Limited with these cards will be interesting to say the least.

The last aspect I wanted to mention was the color distribution of miracle cards. Did you notice that black gets no miracle cards? I guess demons and evil beings cannot grant miracles. Green only gets two instead of the normal three like the other colors. I find it a little frustrating when cycles are incomplete like this. If they had a good reason to cut black out of this mechanic, I suppose that's fine, but giving green only two cards I do not like at all.

Overall, I expect this mechanic to be both exciting and frustrating for players. Casting these cards for cheap will be a lot of fun for the person doing it, but when they're miracled against you it will be a little rough.

Hope you enjoyed this look into a new mechanic and have fun with Avacyn Restored Limited.

Unleash the Force of a Miracle!

4 thoughts on “Miracle or Myth?”