It’s Standard PTQ season! This particular season seems to be coming in quietly and escaping notice. The Standard season is usually one of the more popular ones because players already have most of the necessary cards. I think the main reason events this season are not getting more attention is due to stores having taken them over from large tournament organizers.

Most of the stores I have been to are drastically unprepared to run an event of this caliber. Often, they're not even prepared to host an event larger than thirty players.

Most of them also haven't done much to advertise their PTQs. If you are not doing a lot of research yourself, you are likely unaware where or when they are happening. Before, tournament organizers would publish all their events for the upcoming season so it was easy to locate the PTQs near you. Now, things are much more chaotic.

If you are having trouble locating events, I suggest Wizards' event locator.

As this season lasts until the middle of August there are lots of opportunities to qualify.

I for one am looking to finally earn a spot on the Pro Tour. To that end, I researched the Avacyn Restored Standard events that have happened so far. The Star City Games events in both Providence, Rhode Island and Madison, Wisconsin will be influential in setting up the metagame for this season. Between the two events we have forty-eight deck lists to look at so far. Here is a chart of those decks broken down by deck type.

If we restrict our view to the decks that made top 8, we can dissect some more data.

The first thing I notice is that neither mono-red nor the random control decks broke into top eight. At least for now, Delver seems to remain the top dog even with the new Avacyn Restored cards. G/R Aggro continues to do well too, and seeing as it won both events, it might actually be the best deck.

The other options are solid as well. All six of these archetypes seem like good choices for a PTQ.

Remember you want to select a deck that is generally powerful and consistent, because your goal at a PTQ is not merely to top-eight, but to win the entire event. Also make sure to factor in your familiarity with viable decks. If you have a lot of experience with Solar Flare, for example, it might be the best choice even though it has lower results so far.

When looking at statistics, it is important to think about the ones that are not present as well.

Zombies, for example, found a zero percent success rate these past two weeks. I would say that no matter what color you are playing with Zombies, the deck just isn't good enough right now. The reason for this, in my opinion, is its lack of high impact cards. If the Zombie deck is going to compete, it is going to need to change drastically.

One way to accomplish this would be to alter the basic premise of the deck. Zombies is typically an aggressive black deck splashing blue or red. If we change this premise to include other colors, we might find a better version of the deck. Luckily other players are also working on this concept. One player in particular has been doing well on Magic Online splashing white in Zombies for Lingering Souls and Oblivion Ring.

This past week, I was working on this idea for FNM. The list I played was terrible but I did learn a lot about the deck. Here is an updated version:

As you can see, this is not your average Zombie deck. There are a lot of changes here, all based on solid theories.

One of my main problems with the Zombie deck, no matter what color you choose as your splash, is that the two-drops are terrible. I thought I would fix this with Blood Artist. Don’t get me wrong, Blood Artist did provide a powerful effect, but having zero power was too big of a drawback.

What it boils down to is Blood Artist plays more like an enchantment than a creature. When I drew it in a hand with one or two one-drop guys it was quite powerful. But when I didn't have a one-drop it became basically unplayable. However, the effect is powerful, and it may be playable on an actual body such as Falkenrath Noble.

I have not gotten a chance to test [card Falkenrath Noble]Noble[/card] yet, but I did find a much better card to fill the two-drop slot.

It took a bit of searching to find Porcelain Legionnaire, which has been almost completely forgotten. This card used to see some play in Standard, even in a few Zombie decks. When Gut Shot became incredibly popular, players removed the phyrexian-mana creature from their decks. Now that Gut Shot barely sees play, Porcelain Legionnaire is a great addition again. This creature is even well-positioned right now with threats like Strangleroot Geist seeing so much play.

The other two-drop I added was Distress. In the previous version, I played Distress in the sideboard and I noticed myself sideboarding the card in a lot more than I had planned. I think Distress is in a great place right now. Often your opponent has just a few high impact cards in their deck. If you strip one from their hand, their game plan becomes flimsy until they can topdeck another high-impact spell. 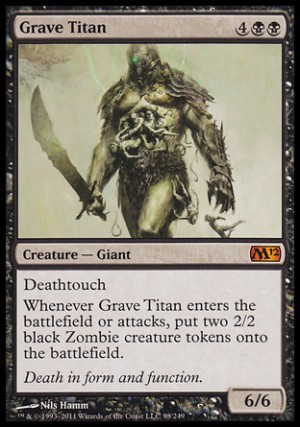 What about this whole ramp package? I know its hard to believe, but Solem Simulacrum is one of the best cards here and I was never unhappy to see him. He has a relevant body, fixes your somewhat awkward mana, and gets you the extra mana you need to cast a high end threat.

Standard is not as fast as many people would believe. There is plenty of time to set up a game plan and execute it. By adding Solemn Simulacrum and Grave Titan, Zombies becomes more of a midrange deck with occasional explosive starts.

Once you land it, very few decks are prepared to deal with a Grave Titan. You could easily replace him with Wurmcoil Engine or Batterskull, which have similar effect, but for now I think the black titan provides the most impact.

You can see that we've certainly met our goal of drastically altering the deck.

The addition of white mana to the deck is also quite good. We all know Lingering Souls is insane, but this deck might be the best place for it in Standard. When all of your creatures get killed, you can untap and not only bring back Gravecrawler, but also flashback Lingering Souls to rebuild your board presence all in one turn.

You may be asking why Sorin Lord of Innistrad was not included when we're already splashing white. The short answer is that he was just not very good. He did not have as large of an impact on games as I had imagined. He may require some more testing, but I don't think he belongs in this deck.

This list is not set in stone. There are more changes that may need to be made, but hopefully the process I've gone through is clear. Zombies cannot be a competitive deck in its current state, so we introduce some drastic changes to reposition it.

This type of strategy is what you want to aim for if you want to compete with a rogue deck. Make sure each card is included for a reason, then test your theories to make sure they are valid.

If you want to play this deck, I would recommend testing it first because it plays very differently than the old Zombies deck.

Choosing a deck for a Pro Tour Qualifier can be a tough challenge. One way to do it is to construct a rogue deck to fight the specific metagame you expect. The other way is to play a top tier deck. Choosing any version of Delver, for example, would be a great choice because of how much success it has had. Players may expect it, but the deck is good enough to succeed despite that. If you are making your deck choice on power level alone, the numbers suggest that both Delver and G/R Aggro are the appropriate choices.

Most importantly, play a deck that you enjoy and have played before. Experience counts for a lot.

I hope this information about the metagame has been insightful and helpful. Have fun at your Pro Tour Qualifiers and hopefully you will find success. What deck are you planning to take? Feel free to post them in the comments below.

Unleash the Force on a PTQ!

Unleash the Force on Standard!