As we venture into the month of August, we're getting closer and closer to rotation, and the current Standard metagame has shifted all sorts of different ways in the meantime. Although Delver is reappearing as the monster of the month, I feel this format may rotate before we've finished finding all the decks.

For a while, it felt like everyone wanted rotation to come crush Delver out of the format, but in my experience, people are enjoying tweaking and playing it or trying to beat it. Overall, it has been a pretty exciting Standard PTQ season. I've got my last PTQ for Return to Ravnica this coming weekend, and then the next relevant Standard tournament in my corner of the country isn't until 2012 States in fall.

What types of things are we looking for going into fall?

Prices are already well on their way to post-rotation and planning ahead can be rough without knowing what the format will look like in 8 weeks. Part of this is why people are so fanatic about spoilers and leaks. The more we know about Return to Ravnica, the more we can plan for its arrival. Right now we know very little. We know we have a large set, featuring 5 guilds: Azorius(W/U), Selesnya(U/G), Rakdos(B/R), Golgari(B/G) and Izzet(U/R).

That means as of release (October 5th), the new set will make up just over a quarter of the legal cards in the format. While Innistrad block strategies may come to shine in Standard, we may also see new support in these 5 color combinations. This week I'm going to look at each one, and think about what potential gainers might be, so we can be ready to move, or gamble early. Also, be sure to read Matt's article from earlier this week about Shocklands on MTGO.

While U/W Delver has been the boogie-man for quite sometime, many feel it's time in the sun is gone once they lose Mana Leak and Ponder. While I don't think it's likely, a new counterspell may arrive that fills that role for this deck. Remand was from Ravnica, after all. Additionally, cards like Moorland Haunt don't care about Delver specifically, and would immediately be included in any creature based strategy that is supported.

We could see a continuation of last years U/W Haunted Humans deck, especially if we see amazing two-drops in RTR like Azorius Guildmage. Geist of Saint Traft has been falling precipitously, as it isn't even included in many current Delver builds, and is a powerful enough card to fuel a deck post rotation. If this card comes down much further, I see it as a solid target. 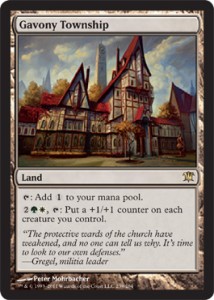 Selesnya was previously a token based guild and we may or may not see something similar this time around. If so, we could see cards like Intangible Virtue spike up. I think this is a great play as they can be found under for $0.50 a piece from various retailers, and this is a card that could be a big winner come time for States. Parallel Lives, while a long shot, could be a powerful effect. Something to consider.

Also, what token based strategy doesn't love a Gavony Township? That card's available at $3/set retail. Ajani likely fits in this strategy too, but isn't really in the conversation for speculation targets. Geist-Honored Monk saw a small amount of play in the anti-Delver strategies this Summer, and he could make a comeback as well (@ $1/set!).

Rakdos is an interesting one. Will vampires be a supported tribe in this guild? If so we could see some sweet tribal action in Stromkirk Captain. These are currently under $1/set, and if the deck is real, would easily quadruple in value. In this stage, that's a gamble, but at the first spoiling of a decent vampire, I'd be jumping on this train as quickly as possible.

A card like Flames of the Firebrand would be a sweet inclusion in a deck like this. While I wouldn't pick it up now, it is something to keep in mind. Even without vampires, there could be support for a Grixis control deck, dare I say it would include Nicol Bolas, Planeswalker? Who knows, but that is a card that would shoot up quickly if it did find a deck that could play it. Perhaps it's a U/B deck that uses Liliana to find a Blood Crypt to make it happen.

Golgari is the first "enemy" colored pair we've seen yet. What the enemy color pairs bring is (likely) a full set of 8 duals for Standard. When combined with the Innistrad lands, we'll see Enemy colored strategies with the best mana they've seen since Reflecting Pool rotated from standard. Woodland Cemetery is at least in the conversation here, as it plays quite nicely alongside the Shocklands. G/B has never been a very popular Standard strategy, but has appeared in plenty of 3-color decks including Junk, Jund and BUG.

Out of the current standard, cards that stand out to me include Garruk Relentless, who has interesting synergies with black, triggering Morbid with his "fight" ability as well as his Tutor on the reverse side. Golgari was previously a graveyard-centric guild, if so, Morbid could be a central theme of a strategy involving the new cards. Of all the guilds, this one has the least action that's apparent to me thus far.

Izzet is the one that has me drooling. U/R decks have always complained about terrible mana, and we're likely to see an end to that. Sulfur Falls may see a climb, but what else will we see? We have hints that Jace will be aligned with Izzet, but will he be U/R in color? Will the new Niv-Mizzet be constructed playable? Cards like Burning Vengeance are thought to be dead, not having gotten enough support in Innistrad block, but more flashback spells is not what that deck needs. It needs cantrips and rituals to fuel a Past in Flames kill. Red sweepers are a premium in such decks, so Bonfire of the Damned would be an inclusion in that strategy, but is way too close to it's ceiling to buy into for speculatory purposes.

In a true Counter-Burn strategy, Rewind gets strong, as does Talrand, Sky Summoner. Talrand is still a bit inflated, considering it's in an Intro Deck, but if it creeps down at all, I'd be willing to gamble on him. Typically in most U/R decks, we see a lot of powerful common/uncommons doing more than their typical fair-share of work, due to overwhelming synergies, so junk uncommons that may hit the limelight aren't limited to Burning Vengeance. Mystic Retreival and Desperate Ravings may find their time to shine. Lastly, the Desolate Lighthouse is one that fits in a controlling U/R very easily.

October is still a ways away, but that doesn't mean you can't get prepared. First, figure out what else I missed. Secondly, you can start picking favorites, and investigating where to find each the cheapest, so that when news comes out, you can be primed to swoop up your targets quickly. Further, you can start to plan a budget for the season: How much do I want to put into speculation this season? What's a reasonable expectation of my return? How does my expected return compare to my risk and how does that compare to other options available to me?

This is all a jumping point for broad speculation without even looking at Block strategies from last year. If this type of article is well received, we can focus similarly on the Block strategies in the future.