Ah... so many sets rotating from Standard legality is like a breath of fresh air.

Pause and take a moment to think about experiencing a brand new format.

Oh, right, Zombies, one of the current tier one decks is still legal. If anything, it gets better because of these sweet cards:

But at least Delver is dead. Everyone is so disgusted with playing against Delver of Secrets // Insectile Aberration. It is a relief that will no longer be the best deck.

Oh, right, that is the deck I'm talking about today. Hmm.

Yes, you may be sick of Delver but I am here to tell you it's not dead. The Azorius guild gets some sweet cards in the new set that will replace cards Delver is losing.

Obviously the most important card rotating out is Ponder. As of yet, there is no replacement for this effect. I doubt Wizards will print something as powerful as Ponder or Preordain again, but I would not mind seeing a Sleight of Hand reprint or even something like Telling Time. Balancing the power level of Ponder by adding a mana to it seems an easy fix.

We are not going to be able port the deck card for card but there are some easy replacements like Unsummon for Vapor Snag. Take a look at my tentative list.

My opinion, as of now, is that the deck should stay two colors. This may change later, but right now this is where I am at. Adding either red or black would be quite easy with the non-basic lands that are available. Of those two options, black is the most appealing to me because of Lingering Souls. This list is not set in stone either. I'm sure card choices will change once I see the full spoiler.

One new addition that I think is amazing in the deck is Inaction Injunction: 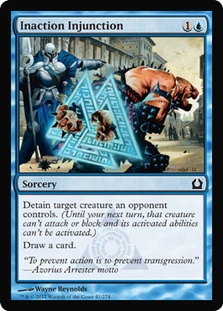 This card fits perfectly into a tempo deck's game plan. It may not force the opponent to replay their threat like Unsummon, but it's also a cantrip. Later you can even flash it back with Snapcaster Mage! It is possible that too few decks will run enough early creatures to warrant playing four copies, but I still think the card is good. I was wishing for this one even before I saw it on the spoiler.

Azorius Charm provides a similar effect except rather than you drawing a card your opponent draws one less card. It is unclear whether we need both Inaction Injunction and Azorius Charm, but both are quite good.

A few cards I decided not to include but I am keeping in mind while working on the list. One of the main cards that did not make it is Feeling of Dread. I like Feeling of Dread quite a bit, but I think it does not belong at the moment. My opinion may change later, but I think this flashback spell fits better in a deck like Blue White Control rather than a Delver deck.

Restoration Angel was another card that did not make the cut on the first pass. I think the new flier Lyev Skyknight is really good so I am trying it out instead of the angel. Switching back is easy enough if Skyknight doesn't work as well as I would like it to.

Finally, Talrand's Invocation was one of the last cards I cut from the initial list. I know it has not seen play yet, but I think it is good enough for Standard. Since it is a sorcery that makes creatures, it would fit well with Delver of Secrets. If I was playing double drake, as I like to call it, I would be inclined to also add black for Lingering Souls.

I don't want to go on and on about Delver because it feels like the same old thing we've heard for the last however many weeks on every Magic site. My gut tells me that players will eventually be just as tired of opponents saying, "Azorius Charm your guy" and following it up two turns later with, "[card Snapcaster Mage]Snapcaster[/card] flashing back Azorius Charm."

I know that at the beginning of the article I insinuated the new Zombie deck would automatically be black and green. The question remains unanswered though and we cannot be sure if green is the correct choice. Take a look at a red version.

By no means am I asserting that this red version is better than the green version, I am just offering it as an option.

This version seems even faster than the green one, which is a huge benefit. You also gain a variety of burn spells. In the little time I have worked with the green version, I noticed that often you get your opponent down to a low life total and then have no way to finish them off. This would rarely happen with the red version. I was able to run less lands as well because my mana curve is lower overall. With no Pyroclasm in the format, a deck with such a low mana curve may be very punishing.

My friend and I have been developing a Jund Rock deck similar to what Gerry Thompson and Brad Nelson have been working on but we do not have a finalized list yet. Maybe next week I will have something for you guys on that front as well. There are a lot of options to explore with all of the new cards. Limited PTQ season is underway as well so hopefully I will have some good stories from those events as well.