Reviewing past analysis and recommendations can be important for understanding where one might have a blind spot or a weakness in speculative strategy.

In a previous column, I named Sorin, Lord of Innistrad on MTGO as a top pick from Innistrad block heading into Return to Ravnica spoiler season. Another, more recent pick I made was Bonfire of the Damned. Comparing these two picks yields valuable insight into the relation of risk to price, and how reducing risk can ensure a strong margin of safety when speculating.

At the time of this recommendation, there was very little available information about Return to Ravnica. Although Sorin's colours are aligned with Orzhov, the fact that tokens as a strategy were nerfed in block suggested that WoTC was worried about tokens in their testing. Thundermaw Hellkite as a foil to tokens is another indicator of their perceived menace.

Early returns from Fall Standard tournaments indicate that tokens is currently a fringe strategy, and Sorin is not necessarily an integral part of a token build. It's still possible that tokens emerges within the new Standard metagame, but at this point the original hypothesis has proven to be incorrect. It's time to carefully reexamine this position. 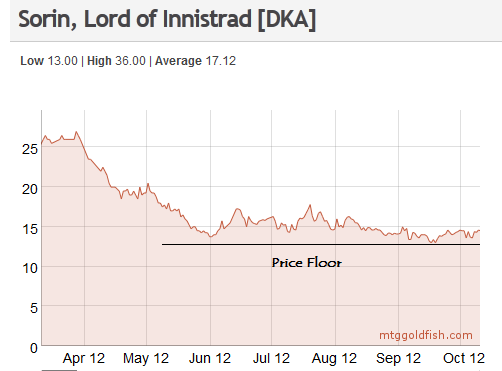 On the positive side, the price floor of 14 tix has steadily held up. The popularity of this vampire planeswalker has supported the price and the Innistrad block structure has kept supply lower than it otherwise would have been. Buying at or near a price floor is a great way to reduce risk and if one had purchased Sorin on the recommendation, the total loss at this point can be attributed only to the buy/sell spread.

This illustrates an important way to reduce risk. Buy cards that are cheap! Making a call to buy a card should take into account the current price and the price history of a card. Combining these with analysis of how the Standard metagame might develop resulted in the call to buy Sorin. Now that the metagame analysis has proven to be incorrect, the margin of safety on this pick comes from buying at or near the price floor of 14 tix.

Continuing to hold means tying up capital in the near term which might be better deployed elsewhere. Down the road the Gatecrash spoiler season should perk up interest in this card from brewers and competitive players. Modern season also might deliver a bump in price as token strategies continue to make the odd appearance in the winner's bracket.

The plan with this card is to hold onto the position unless the price floor of 14 is violated, i.e. if Cardbot begins to regularly price Sorin at 12-13 tix. If this happens, then it's time to sell the position and accept the loss of capital. Once a card begins a steady decline and breaks though a price floor, a new floor will typically have to be established. This means there will be a lower price at which to buy this card before Gatecrash spoiler season drums up interest and starts driving the price up again.

If a token deck featuring Sorin breaks out in Standard, then this will interrupt the price decline. As long as Sorin maintains the current price floor, holding for this possible shift in the metagame is a better option than selling and eating the buy/sell spread.

This card was outlined as a risky strategy, but due to its price momentum, powerful in-game effect and scarcity as a 3rd set mythic, signs pointed to further increases. At the time of the recommendation, Bonfire was off its peak but still within the uptrend price channel. 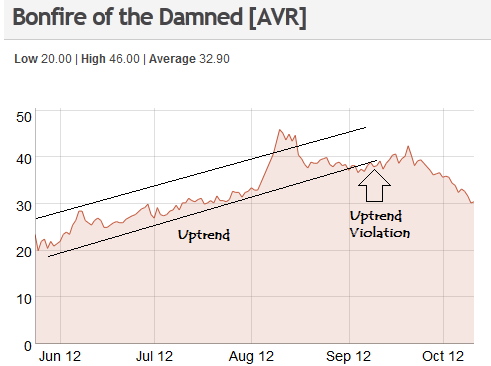 The card lost price momentum, signaled when the uptrend price channel was violated. It drifted sideways for a while and then started a downwards trend. When the trend changed, indicating that the factors involved in propelling Bonfire's price upwards were on the wane, it was a warning sign to be cautious.

At this point, there is no clear sign of where or when Bonfire will stabilize, but 20 tix will be an important level. If it holds 20 tix and establishes a new price floor, then it will be time to apply new analysis to decide if Bonfire is a worthwhile purchase. If you are holding Bonfire of the Damned in order to speculate, the risk of further downward price movements are high and selling now would be recommended.

A Comparison in Risk

Bonfire has a shorter price history than Sorin and has also shown more volatility. Sorin might not be played very much in Standard, but the price has been steady. Buying Sorin at a price floor was much less risky than buying Bonfire in the late stages of it's uptrend.

By minimizing your risk and buying when cards are cheap, you will protect your capital until a good opportunity arises. Cards that are cheap carry a higher margin of safety. They can only go down in price a certain amount, while an expensive card has the potential to fall much further. Trying to catch the last wave of Bonfire's increase proved to be foolish. This mistake could have been avoided by paying more attention to the reduction of risk while taking speculative positions.

9 thoughts on “Insider: Recommended for Review”