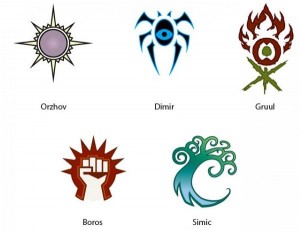 The release of Gatecrash is rapidly approaching, and when it arrives Standard will get a face-lift of sorts. The remaining five Shock Lands will become available as well as some [hopefully] powerful cards from the remaining five guilds. For quick reference, the five guilds in Gatecrash are Boros (W/R), Simic (U/G), Dimir (U/B), Gruul (G/R), and Orzhov (W/B).

Each of these five guilds will have an impact on Standard in varying ways. As the metagame evolves to absorb the new set, certain cards will shift in popularity and value. But rather than wait for the shift in value, we can begin speculating on what may be powerful with the release of Gatecrash.

In fact this has already begun in some circumstances – I will do my best to bring you up to speed on recent price moves based on Gatecrash speculation. I’ll also try to mention a few possible ideas that may not have gotten everyone’s notice yet.

Black/White is always a popular casual color combination. Therefore, any awesome Legendary Creatures in Gatecrash that represent the Orzhov guild have a chance at being financially relevant. But before getting excited about speculation on new cards, we should first consider cards already in Standard which may see a price bump with the printing of many Orzhov cards.

To me, three obvious cards come to mind – and one of them has already seen a small price rebound. Check out the token B/W Planeswalker, Sorin, Lord of Innistrad (chart from blacklotusproject.com): 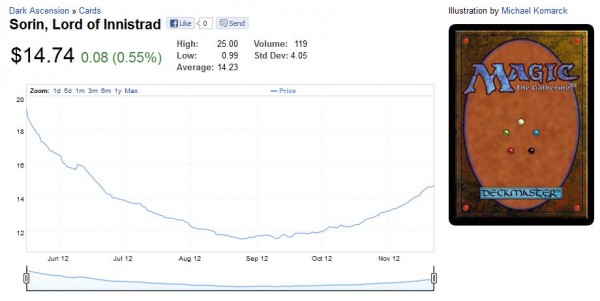 This Planeswalker really hasn’t seen that much increase in play lately. But the anticipation of strong B/W cards to enable a viable Orzhov deck has already bumped Sorin up in price. He’s not near his peak yet, so there is certainly some more upside. If he sees increased play with the release of Gatecrash, he has potential to return to $20 (cash prices).

But if his fifteen minutes of fame is cut short, his run will end. Still, once Gatecrash is released there will be so much hype that people will want to brew decks with Sorin. Whether he is a hit or a myth, he will still see increased demand – it could be wise to acquire Sorin in trades now and move him shortly after release unless he breaks out.

Two other clear options for Orzhov include Lingering Souls and Vault of the Archangel. Both have already seen some price increase. They are both from Dark Ascension and were, therefore, opened in fewer quantities. These seem like auto-includes in any strong Orzhov deck – I would recommend acquiring these either at discount prices or in trades, as they are well positioned to be strong players come Gatecrash release.

Blue/Black is often the most popular and powerful color combination. After all, there is a reason Underground Sea is the most expensive Dual Land. But in Standard, this trend tends to break down. Perhaps Wizards is afraid of making this very control-based guild too powerful. Either way, Dimir is bound to have an impact on the format.

That being said, it’s difficult to identify cards in current Standard that are on the rise from Dimir anticipation. Nephalia Drownyard would be the most obvious choice, but the card has already seen significant play and still is nearly bulk. Evil Twin also has an essence of Dimir associated, but it too seems near bulk rare status. Should these two see increased play, potential upside is still limited.

In my opinion, Dimir may make a strong partner to Orzhov to create a Tier 1 Esper Control deck. Such a deck has already seen some success in Standard, and having access to Watery Grave and Godless Shrine can certainly help. A powerful removal spell, draw spell, or counterspell would also strengthen the deck and improve the utility of Snapcaster Mage.

In fact, Snapcaster Mage may see increased play again should this be the case. It may return to $20 but its price cap does seem fairly firm in that region (chart from blacklotusproject.com). 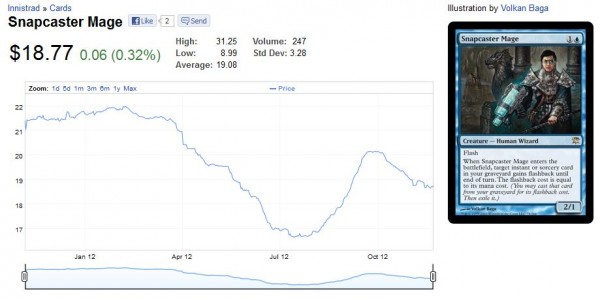 Geist of Saint Traft is another powerful creature that may fit into an Esper Control deck. Though this Legendary Creature is even more expensive than Snapcaster – acquire cautiously, in my opinion. I’d rather have $30 worth of Lingering Souls than one Geist of Saint Traft.

One prime creature comes to mind when I think Gruul… 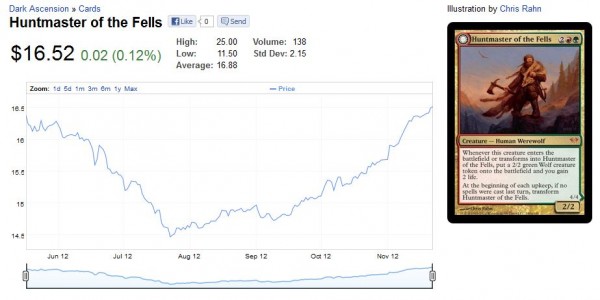 I have been bullish on Huntmaster of the Fells // Ravager of the Fells (chart from blacklotusproject.com) since his price bottomed a couple months ago. He’s been a 4-of in many successful Jund lists at SCG Opens. And being a Mythic Rare from Dark Ascension, his potential upside is significant… once people break down that apparent price barrier of $20. For some reason he’s bumping into a ceiling that Geist of Saint Traft hasn’t dealt with.

Either way, with Jund decks already being popular and powerful, Gruul will likely strengthen the strategy. This can only increase the playability of Huntmaster, and I can see his price finally hitting $20 cash, should Jund/Gruul decks remain Tier 1.

Although slightly more on the speculative side, Somberwald Sage is another creature worth considering. This mana-producing creature has already proven relevant in Standard with Brad Nelson’s G/B/W ramp / [cardUnburial Rites[/card] deck. 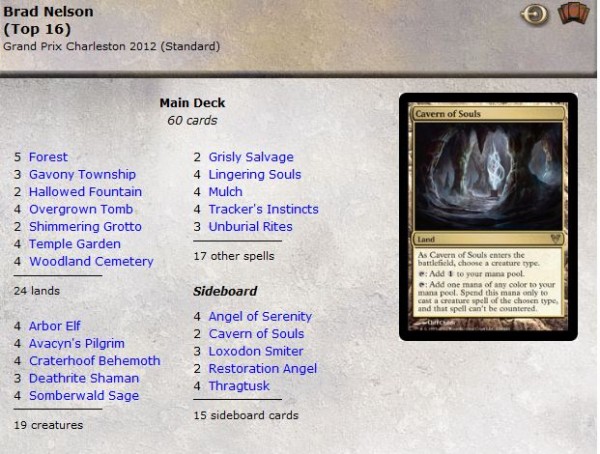 With Gruul likely to bring more poweful creatures, Somberwald Sage may have another home in Standard. Her power has been proven – now it’s just a matter of finding the optimal color combination and guild to maximize her power. I feel the release of Gatecrash will help her chances more than hurt them. And at $1 each, you could do worse for a small cap speculation.

The most obvious play here, in my opinion, is Clifftop Retreat. This land has already run up to compete in price with the other Innistrad Dual Lands. Because these lagged behind for so long, they are now the only Innistrad Dual Lands I own. The rest are all sold. I’ll be selling these once the first awesome Boros card is spoiled.

Some players anticipate Silverblade Paladin to be a good fit with a Boros deck (chart from blacklotusproject.com). 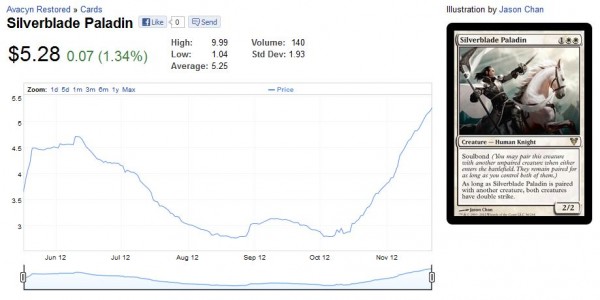 The Paladin’s recent success has already helped bolster his price to an all-time high. Double Strike is such a powerful ability that essentially doubles the power of an attacker. With Boros being a fast-paced attack-oriented guild, Double Strike can provide a powerful one-two punch. Silverblade Paladin is one card I am consistently trying to pick up, but they sell to dealers so freely it’s uncanny. Buy and sell prices are rising to keep pace with demand and I can see this creature hitting $10.

Sublime Archangel is another creature on the rapid rise. She could fit in reasonably well in a creature-based Boros deck. Once she hits the board, her presence is known and I’m surprised it took so long for her to get notice. My eye is definitely on her and I plan on trading for her when I can.

An even better fit for Boros may be Hellrider (chart from blacklotusproject.com).

This card has been on quite the run lately, driving the price up more than double it’s bottom. And blacklotusproject.com hasn’t even caught up yet – expect to see this card finally plateau near $6.

I am not sure how much room this one has to go – it’s a tough one to predict. On the one hand, he’s a rare from Dark Ascension and may be slightly harder to find. He is also very powerful in creature-based decks that like to attack. On the other hand, Red aggressive decks are often hated out of formats and marquis creatures from these decks often hit a ceiling quickly. It may all depend on what Boros brings to the table that can enable this guy. The same goes for Thundermaw Hellkite, which also has potential upside in the right Tier 1 deck.

Last but not least we have Simic, the mysterious U/G guild. Most rumors on this guild include some sort of Merfolk creature theme. Thus many in the QS forums have been advocating Master of the Pearl Trident. I personally don’t see this creature hitting the big time, but I could be wrong. He is fairly cheap to acquire now, so if you are bullish on Merfolk in Standard, the time to acquire is now before any Merfolk [potentially] get spoiled.

Hinterland Harbor would be a clear play on the lands front. But at $11.99 on Star City Games already, I’m not sure how much more room this one has to grow. Looking at the chart it appears this one has already leveled in price (chart from blacklotusproject.com). 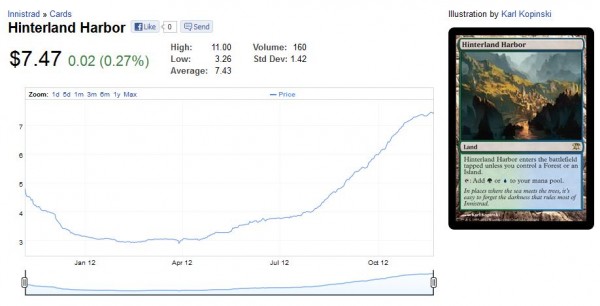 Can Hinterland Harbor go up further? Of course… Woodland Cemetery set precedent on how high these can go. But until we see Simic become a major strategy, I’m inclined to hold off. I like Clifftop Retreat much more going into Gatecrash release.

When new sets are launched, it means opportunity. Being able to anticipate what cards may become more popular well before spoiler season can net you solid profits. In fact, it may be nearing a bit late on many of the ones I listed above. Sorin, Lord of Innistrad, Clifftop Retreat and Silverblade Paladin have already seen price bumps.

But even if we are too late to the speculation party this time around, it is very helpful to analyze what moved and why. We can then reapply the logic when subsequent sets are released to help us stay ahead of the curve next time around.