I haven’t been paying too much attention to constructed Magic lately. I’ve been putting a lot of time into Pauper Cube (in case you haven’t heard) and a lot more time into work. From what I understand Standard is really awesome right now, but seeing as I won’t be attending any Standard events until the release of Gatecrash I haven’t been paying much attention. Spoiler season has started but thus I think it’s a little early and I think that I’m a little under-informed to be writing about any of that.

That said I have a few thoughts on Legacy that I believe are worth exploring. And by that, I of course mean that I have a revision or two for RUG Delver. I’ve gotten the impression that by now many people are just plain bored with RUG, but playing RUG generates exactly the kind of Magic that I like and in my mind nothing has risen to dethrone it as the de facto best deck in Legacy.

The updates that I have for RUG all revolve around this card: 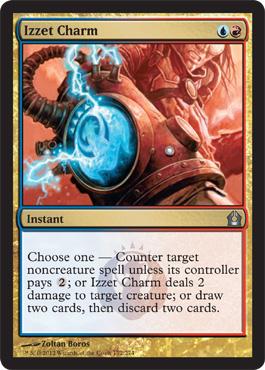 I initially included a single copy of Izzet Charm in RUG at a local event because I was bored, but I found myself in multiple situations where I found myself wanting to draw it. I ended up adding a second copy from there and it has been very good for me.

As one might imagine, Izzet Charm ended up taking the place of Fire/Ice, which has been a flexible slot for some time. This costs the deck some play against Maverick, Goblins and Elves! to be sure, but in my experience all three of those matchups are still quite favorable. Elves is easily the closest of the three but it’s also considerably less popular than the other two and is a deck that is often completely cold to an Insectile Aberration // Insectile Aberration.

The other point where Izzet Charm is weaker than Fire/Ice is in its inability to damage players. This isn’t a huge concern of mine as RUG is a far cry from a burn deck, but many other players have raised this concern with me over my playing of Dismember and now Izzet Charm over spells that go to the dome. RUG is more than capable of winning long games and I don’t see giving up some small percentage of races as a very substantial hit to the deck, especially given the alternative utility that Izzet Charm provides.

What It Does Differently

The Spell Pierce option is obviously not without its appeal. RUG already finds itself playing a substantial number of copies of that card, though costing two mana is not insignificantly worse than costing one.

The major selling point is the ability to loot. It’s good for building Threshold of course, but this option also adds a lot of power to RUG going into the late game.

Before one can truly appreciate Izzet Charm, one must be acquainted with good Brainstorming. Two general rules to follow when Brainstorming are that you should try to cast Brainstorm on the last possible turn and that you should have some way to get rid of the two cards that you put back rather than drawing them again.

Izzet Charm is quite brilliant at playing the role of Brainstorm when Brainstorm would be a lousy play. Have extra lands but no fetches? Being able to loot instead of Brainstorm-locking yourself is awesome. The same logic applies to situations where you’re digging for threats but lacking a shuffle effect.

The card disadvantage of looting is not a non-factor, but if you have much experience with RUG you understand that you generally have more cards in hand than your opponent simply by virtue of not needing to commit too many lands. Obviously RUG hasn’t jumped on Careful Study or Faithless Looting for the reason of card disadvantage, but those cards also didn’t have two other modes closely resembling spells you want to be casting anyway.

The other change I have in mind for RUG is in regard to Force of Will. As Matt Nass wrote in his LA report combo just isn’t very good right now. Two-for-oning yourself against decks like BUG is just plain miserable and with Izzet Charm in the deck now we don’t want to go overboard on cards that generate card disadvantage.

That said, I don’t think that a deck that operates on mana as tight as RUGs can reasonably bench more than one copy of Force, and it absolutely matters against the Aether Vials that have been somewhat rampant lately. Benching the fourth is a pretty enticing option right now though. With Izzet Charm in the deck now I don’t think that the fourth Spell Pierce is needed in the 75, so that frees up a sideboard slot, and by placing Force in the board that means that we have an open maindeck slot.
I’ve been playing Vendilion Clique in that sideboard slot and it has proven quite good in multiple matchups- particularly in matchups where Tarmogoyf is a dud. I’m going to try Clique in the main this Thursday and see how it goes. I’m optimistic.

With the above in mind, this is my current RUG build:

3 Tormods Crypt
2 Sulfur Elemental
2 Blue Elemental Blast
3 Red Elemental Blast
1 Force of Will
3 Submerge
1 Dismember
Trimming a spell for a creature hurts Delver of Secrets // Insectile Aberration some, but I don’t believe this to be a huge deal. If I end up cutting Clique for a spell it will be because there is an effect that I want, not because I especially care about the one slot being a spell.

I’ve kind of taken a break from non-Cube Magic over the last couple weeks (designing a Cube is a lot of work!) but I plan to start battling more seriously in the short term. I had a pretty good year with Magic last year and I believe that if I dedicate more time to keeping my mind sharp I can have a great year this year. Thanks for coming along for the ride.