Want to hear a riddle? What do the Stock Market and the Modern format have in common? Give up? Let me show you… 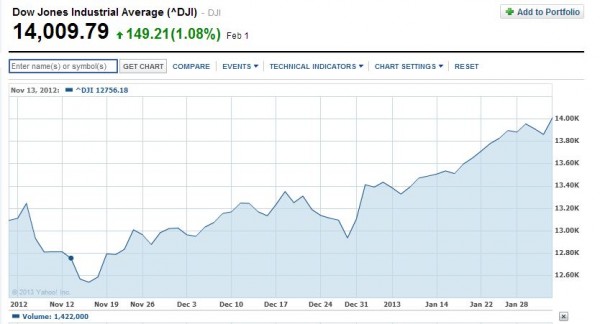 This may not surprise some of you, but both the Dow and Modern have hit crazy five year highs! But the answer to the riddle goes one layer deeper. Wall Street has been ignoring the looming debt ceiling, troubles in Europe and uncertainty in China by sending the market higher and higher. Likewise, Magic players and speculators are sinking money into Modern staples despite the fact that Modern PTQ season will end in a couple months and Modern Masters will bring us ample reprints.

What Is Happening to Modern?!

Has anyone looked at the mtgstocks.com chart for Fulminator Mage recently?

I was concerned that the banning of Bloodbraid Elf and Seething Song would annoy players and hit the MTG Modern market. Instead, these bannings have merely given speculators additional targets to acquire. Apparently, Fulminator Mage was towards the top of the list.

But the ridiculousness doesn’t stop here. People have assumed that any Modern deck not hit by the B&R announcement will increase in popularity, and therefore value. For example, I was thrilled to unload my Karn Liberated in trade right before the colorless Planeswalker rotated out of Standard. Apparently that was just plain wrong…(chart from mtgstocks.com):

With so many price jumps in Modern of late, I’m sensing we may be in the midst of a bubble and, at a minimum, a correction is likely. With this context, I want to explain how I am preparing for the coming months of Modern.

Rather than list dozens of cards on the move and expecting you to act upon all the recommendations, I’ll try something a little different. Let me break down the Modern landscape and place general categories into a buy, sell, or hold recommendation. I will also try to provide examples of each, with a brief sentence or two providing rationale as to why I feel this way.

I’ve stated on multiple occasions that I’m not an aggressive speculator. Some members of the Quiet Speculation community go very deep on a given target, purchasing dozens of copies. Just because I am claiming these cards are a “buy” doesn’t imply one should purchase a hundred of them. Instead, I’d encourage you to do some research, price compare, and then decide for yourself how many copies make sense.

With this in mind, my top targets are the cards legal in Modern, aren’t in Standard, and aren’t at risk for reprinting in Modern Masters. This will include cards from Zendikar to New Phyrexia. I am even consciously looking to favor cards printed in that elusive third set, which is often opened least in a block. Finally, the card has to be Modern playable (duh), but not already super-expensive.

My top example is Spellskite (chart from mtgstocks.com).

Spellskite has already seen an exponential increase in price, albeit small on the absolute scale. While this card may not hit $10 this Modern season, I love the long-term prospects of it. The card is geared toward strategy disruption like Fulminator Mage, so there is certainly upside to the Artifact Horror.

And he even sees main deck play in some cases, especially with the rise in popularity of enchantment-based decks (Splinter Twin being a huge one). This is currently my top pick, and I have purchased a dozen copies myself around $3.50 each on average.

Other cards in this category include Scars of Mirrodin Dual Lands (although there are more quantities), Birthing Pod (although it was in an Event Deck), and Worldwake Man-Lands. The latter is also a great target to trade into – players still have ample copies in their binders and the window to acquire these cheaply is closing. I don’t see them becoming irrelevant in Modern any time soon, either.

This category is difficult to nail down definitively, because cards worth holding are likely to maintain value while not increasing or decreasing significantly. In my opinion, the top cards worth holding (but not buying or selling) are the already-inflated cards in Modern which still are immune to reprinting in Modern Masters.

The first cards that come to mind are the popular Eldrazi Mythic Rares: Emrakul, the Aeons Torn, Kozilek, Butcher of Truth, and Ulamog, the Infinite Gyre (chart from mtgstocks.com).

These have all jumped significantly during Modern season, but their upside from here is pretty limited. Tron is a strong deck, but it would likely have to reach Jund status (pre-banning of Bloodbraid Elf) in order for these Eldrazi to reach a significantly higher price point. Casual play should keep these prices stable, so they aren’t likely to drop much once Modern season ends. Come next Modern season, there should be another opportunity to unload these at a good price.

Inquisition of Kozilek and Karn Liberated are also likely a hold. I’ve sold my Inquistions personally, but I made that decision a bit too rashly. These may not double again in price, but they aren’t likely to drop either.

Deathrite Shaman is, of course, a hold, and I’m not that down on holding Snapcaster Mage either. The latter may drop a little upon rotation, but his Modern and Legacy playability won’t allow his price to deflate for long.

It may not surprise you that my sell category is the largest when it comes to Modern staples. With Modern PTQ season ending in two months, combined with the unknowns of Modern Masters, holding super-inflated Modern staples in the hopes they rise further in price is simply foolish. Wizards of the Coast has made it very clear they intend to keep Modern an affordable format. Tarmogoyfs at $100 does not meet this definition for two seconds (chart from mtgstocks.com):

If you are obsessed with the original artwork, then it’s not terrible to hold Tarmogoyf. The Future Sight version shouldn’t drop as much. But this is the one card we already know is going to be in Modern Masters. Demand will decrease slightly when Standard PTQ season begins and then an influx of supply will take place. These two events happening back-to-back will deflate the price of this long-beloved two drop.

I’ve already discussed other major Modern staples, including Thoughtseize, Dark Confidant, and Vendilion Clique. Additionally, I’m pretty bearish on many cards that have skyrocketed since Modern season began. That includes Kitchen Finks (uncommon with possible reprint in MM), Chord of Calling, Kiki-Jiki, Mirror Breaker, and now we can add Fulminator Mage to the list.

There are many more cards I wouldn’t want to sit on right now. So many price spikes have taken place that I am very suspect of the sustainability of them. With the uncertainty of Modern Masters looming overhead, I simply cannot recommend buying vulnerable cards. If you want to take the risk, go on ahead. Everything can’t be in Modern Masters. But enough will be, so that the cards not reprinted that you kept won’t likely outweigh value lost from the ones that were.

Modern Is A Hit…Sort Of

Wizards of the Coast has managed to create a very important format. Modern isn’t as intimidating as Legacy, and it enables players to use their recently-rotated ex-Standard cards. If it weren’t for Modern, cards like Fulminator Mage would be just a couple bucks.

But there is a small problem with their approach. They intended to make this format affordable and ubiquitous. They want FNM Modern players, PTQ grinder Modern players, and Professional Modern players. It comes as no surprise this has caused a rapid inflation in Modern card prices – the opposite of what Wizards wants.

So what will happen next? I see two possible outcomes: if Modern Masters is under-printed, then prices will not drop significantly and Wizards will have to create additional reprints to maintain Modern as an affordable format. If Modern Masters does manage to shift prices down a bit, then they were successful… and the value of our collections all drop a bit.

Either way, Modern prices cannot rise forever. Some may have some time left in the sun, but many cards are likely going to be peaking… at least for the medium-term horizon. And with no reserved list holding anyone back, Wizards has the power to ensure there are ample quantities of Modern cards for years to come. Act accordingly.

35 thoughts on “Insider: The Modern Bubble Continues to Grow”