I was going through some old documents the other day and found a list of every trade I made from September 21 through October 19. Conveniently, Return to Ravnica released on October 5, so this exactly covers the period two weeks before through two weeks after rotation. I originally made this list in order to come back later and see how I did on my trades long-term, so finding this just before this year’s rotation couldn’t be more perfect. In this article, I’m going to review some of the trades I made last year and examine how the trends of 2012 may be applied to 2013.

So I guess I’m starting out with one that I wish I could take back. Both now and at the time, this is a slightly favorable trade for me, but that’s not taking into account what happened in between. Take a look at this graph from MTGStocks.com: 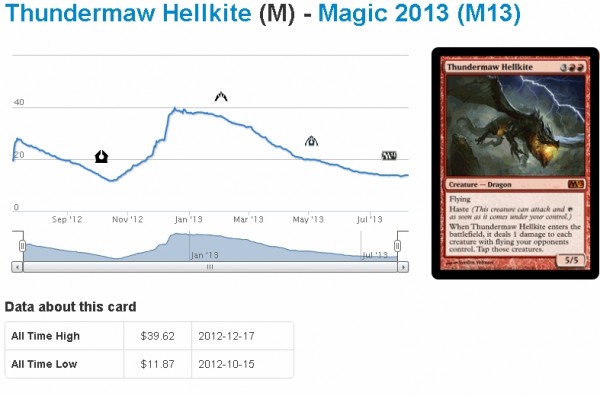 I correctly identified that Thundermaw Hellkite was trending downward at the time of this trade, falling all the way to $11.87 on October 15, but failed to take into account the shakeup Return to Ravnica’s release would have on the metagame and prices. As soon as UWR Midrange, Mono Red, and other strategies started running the card, its price rocketed all the way to $39.62. The cards I acquired were all from the freshly-released Izzet v. Golgari Duel Deck. Unfortunately, Life from the Loam was reprinted again in Modern Masters, which took away some of the long-term upside this trade might have had.

1. Just because a card’s price is falling in the current meta does not mean next year’s meta won’t be favorable to that card. At the moment, I am avoiding overhyped mythics like Archangel of Thune, Kalonian Hydra, and the new Planeswalkers, but if these fall too low, a change in approach will be advisable. I’ll be keeping a close eye on these mythics in the coming weeks.

I like this trade, as it let me get rid of Nicol Bolas, which had just seen its third printing, and allowed me to acquire Silverblade Paladins, a favorite target of mine last year. At the time of this trade, the Paladin was overshadowed by Mirran Crusader in Standard, and as a result its price was depressed. After rotation, Silverblade Paladin spiked as high as $10.65, and I took the opportunity to trade the copies I had acquired one-for-one for shock lands.

2. Casual cards seeing wide-release reprint should probably be traded. In M14, this includes cards like Door of Destinies and Sanguine Bond, which formerly had a high price due to casual appeal, but should see a dip with greater supply entering the market.

3. If a card from the current block seems good but isn’t seeing play, try to determine if a rotating card has been outclassing it. Identifying these situations correctly can be quite profitable.

Given that Humility is on the Reserved List, my trade partner agreed to give me a premium on this trade. I recall using SCG pricing for this one, which worked to my advantage as my notes show I only got about a $5 premium, not the $10 I got according to MTG Stocks. The cards I acquired were a combination of Modern, EDH, and rotating cards, and even though Humility has gone up, it’s pretty clear I came out ahead long-term.

4. Targeting rotating or underpriced cards that see eternal play (Modern or Legacy) virtually guarantees long-term gains. This year, that means cards like Snapcaster Mage, Geist of Saint Traft, and Liliana of the Veil should be high on your list of acquisitions after rotation.

5. It is realistic to ask for and get a premium for cards on the Reserved List.

6. Trades are going to look different based on what site you are using for pricing. If you know your prices well, you can get more value from your cards by using a site with favorable price listings. For example, if you can find a card which has a TCG Player mid-level price higher than that of Star City Games, you can grind trading for that card at SCG prices (getting more value on your cards since SCG’s prices are usually higher), and trading away the card at TCG Player prices (where the cards you’re acquiring will be priced lower than on SCG). Sometimes your trade partner may have a different site he or she would like to use, and that’s okay. There’s no need to bully people into using your preferred site—everyone should leave a trade happy.

Despite the numbers working out in my favor, I’m not sure I like this trade. I somehow convinced myself that because Surgical Extraction is a playable sideboard card in Eternal formats, it was going to spike after rotation and I had to get mine right away. This obviously didn’t pan out, and I think I could have gotten some more value out of the cards I traded away.

7. Patience is a virtue. I could have found someone else who wanted Standard stock in exchange for rotating cards, but I let my anxiousness to get the card sooner cause me to trade away sweet older cards for narrow sideboard cards. I should have waited for a better deal.

8. Assuming rotating Standard sideboard cards that see niche play in Eternal formats are going to spike within a year or two is often erroneous. I could have picked these up at any point in the last year and probably gotten a much better deal on them. This year I’ll be more discerning with my rotation targets.

This trade was with one of the more financially-inclined traders at my LGS, and it was kind of a fun one to work out because we both knew that many of these cards were likely to spike. I gave up a bit of value at the time to ensure I got the lands I wanted, but I was happy to do so. We were both successful at targeting items that saw an increase, but given that I got the fetch lands, it definitely came out more favorably for me.

10. If you’re super confident in a spec (or just want the cards really badly), it’s okay to give up some additional value to make a trade happen. Ubiquitous staples like fetch lands often warrant a premium, and that’s just a reality a trader has to accept.

It’s amazing how detailing just five trades can eat up a word count so fast, but there’s a lot of information to be learned by digging deep on past deals. I plan to use the principles I’ve detailed here to shape my trading strategies in the coming months, and as I determine my objectives, I will share them in upcoming articles.

The trades I detailed today cover the weeks before and of the Return to Ravnica prerelease. I have several more trades recorded from this period, though, including ones immediately following rotation. There’s definitely more principles that can be learned from these, so let me know in the comments if you’d like to see a part two. I hope this was instructive and helpful to you all.