Yes. Tonight is the night before Christmas.

Just a reminder - Friday morning begins Day 1 of Pro Tour Born of the Gods. If you've been following along - I'm a big proponent of Modern and what it can do for a store, trader, or investor. Most are fearful that one day there will be a bubble popped because of reprinting, but if you're playing the game correctly - this should never be a worry. It's all part of the ebbs and flows. Position is all that matters. Gaining the fraction of an edge before anyone else has it. Preparedness and willingness to strike. Never underestimate what a reprint will do for demand, or cost/supply.

Already, we're seeing where the rubber meets the road. A good cross selection of Modern applicable cards have already been seeing movement this last week based on where people feel this format is going.  The more important thing is - what can we expect? After each deck I present I will list cards I believe are going to experience a negative overall value change. Legacy, also being a thing, I will take into account with my interpretations.

1) Jund will still be a thing. 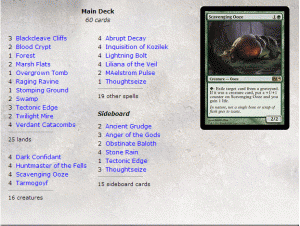 The initial hype is that Jund is dead. Some people are still able to put up numbers with it, but the recent bannings have relatively neutered the deck. With that being said - Huntmaster of the Fells // Ravager of the Fells and Courser of Kruphix are filling in the gap so far. Without moving to some form of mass removal, the deck will continue to have problems with aggro strategies. The Mid-Range or Aggro decks that it could really prey on have all fallen by the wayside.

Deathrite Shaman was the main tool that encouraged the fall from grace of most UWR style decks and now the floodgates have been opened. The issue for Jund is still being able to hand all the various ways UWR can interact with you while being able to disrupt their card advantage and making your top decks better. Drawing a Thoughtseize late in the game is still one of the worst feelings in Modern.

2) UWR will be HEAVILY represented 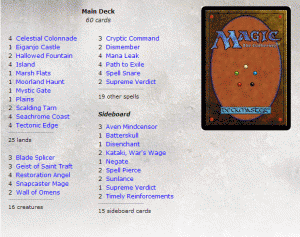 The belle of the ball. UWR is already posting significant numbers of players into the Dailies and Premier events that we have results for. This is going to make the loss in demand we've seen on all cards in that archetype swell. I don't forsee many changes to the archetype itself - other than more Supreme Verdicts being ran. The format is begging for a board sweeper and UWR will be the archetype to carry that flag. Which version that will do best is yet to be seen, but Blade Splicer could also see impact from the lists that are being played currently. This will ALL depend on what version eeks it's way to the top.

3) Scapeshift is a thing again 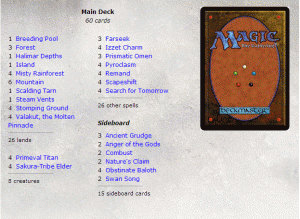 From every Scapeshift player I have spoken to - the one issue they all had was how bad the Jund matchup was. That will not be the case anymore. The only other thorn could be the resurgence of "Fast Aggro." Keep a very close on on how this pans out.

4) Zoo will probably be a default deck for many people 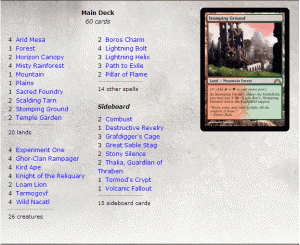 Zoo is by far the resurgent "Hyper Aggressive" strategy of choice. This will be a starting point for many to see what was what during their playtest sessions. The representation will be high at the PT, but there aren't very many "winners or losers" from the Zoo. Once they start adopting Voice of Resurgence or [/card]Loxodon Smiter[/card], or those cards are in a well performing list - then I see more gainers out of Zoo.

5) Pod will win the Pro Tour 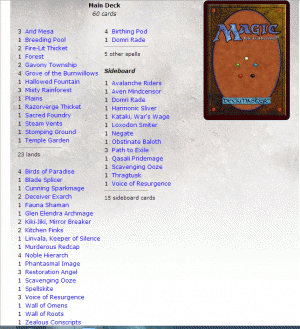 The one caveat I will place on this: "Pod is an incredibly difficult deck to pilot correctly." With that out of the way, the format has been slow to react to what pod really can do as well - Pod switching over toe Noble Heirarch has been a boon for the creature battles the deck certainly will face. The format is very creature oriented, at this moment, but that shift has already started to occur with the changes that were wrought. Has it moved far enough into the control environment at this stage? I don't think so. I don't believe that most players are really going to account for Pod accurately. Or just how many angles the deck can attack you from. The additional splash damage of Voice of Resurgence being amazing against the rise of Faerie and UWR decks will only help the cause for Pod and it's variants.

6) There will be one dark horse that performs well.

I am leaning towards Boggles more so than Poison as a potential for this category. Affinity could still put up numbers because of the sheer number of people that play it and it's resiliency to Supreme Verdict. I don't think that Faeries has the capabilities of suffocating Zoo or being able to compete with UWR. Bitterblossom based strategies could be incorporated into a Jund shell, but that's hard to see as a 3-4 of as this moment. Most have been using 1-2 with mixed results.

Tron style decks have clearly fallen to Tier 2 and I don't foresee any list doing exceptionally well in a sea of counterspells. There's a chance a B/W Tokens shell could do well, but it's too early to see if that's going to be the case. That particular deck preys very much on an established metagame. It's my opinion that the format is only now starting to settle down.

The rest is surely going to be a "wait and see."

There are a wide variety of strategies and some will be driven more to the wayside than others by the recent changes. Now that we have the top players in the World competing on the biggest stage - all the setup from last year's Modern Masters will truly come to fruition. With this lead-up into the summer season, this Pro Tour will set the stage for the coming months on the most readily available yet lucrative cards on the market. Standard is a great place to be for constant demand - but MODERN is where you want to be where demand, supply, and profitability all come together at once.

Time to open some presents!

2 thoughts on “Insider: The Night Before Christmas…..”