Last weekend was Pro Tour Journey Into Nyx, the annual Block Constructed Pro Tour. The name of the game was Theros Block, encapsulating the three sets Theros, Born of the Gods, and Journey Into Nyx.

Wizards has dropped a lot of support for Block lately, particularly by removing the PTQ season that we’ve seen historically. It’s still heavily played on Magic Online, and it’s seeing upcoming support and Grand Prix Manchester, but overall I imagine the format will not have much competitive relevance to majority of QuietSpeculation.com readers.

That being said, the results are still quite relevant.

Block constructed results are some of the most valuable pieces of information available for predicting the future of Standard. Once the new fall set hits, the entire Return to Ravnica block and M14 will be gone, meaning Standard will be the fall set, the new core set (M15), along with the entire Theros block.

That weighs Theros block heavily into the equation. The best block cards will be among the best in future Standard, and the top block decks will port into Standard. There is a strong competitive and financial incentive to stay on top of the block constructed format.

Those who were around last year may remember Jace, Architect of Thought as the all-star of the block Pro Tour. It correspondingly rose in price throughout the summer before peaking near triple the initial value after the Standard Pro Tour in October, when it was played in two tier-one decks--UWx control and Monoblue Devotion. That’s just one recent example of Block constructed foretelling the future.

Today I’m going to look past the obvious--past the maindeck 4-of cards like Fleecemane Lion and Elspeth, Sun's Champion, and to the sideboards, where hidden gems can be found.

Sideboard cards of Block constructed will hold valuable information about the future of Standard. Sideboard cards do not exist in a vacuum, and many of them have been chosen to combat a specific problem within the Block. While some of these may be too niche for the upcoming Standard format, others may become absolute staples.

Today I will sort that out and choose the sideboard cards most likely to make an impact this fall. I will study top 8 and winning-record lists from the Block Pro Tour. 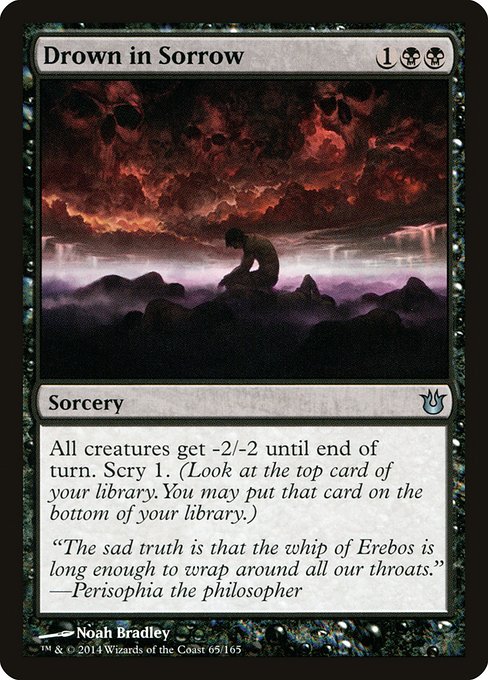 Drown in Sorrow is the go-to board wipe against the rush aggro decks in the Block format. Many of the most successful decks in the format are controlling, and they are based in the color Black. Chapin’s Junk deck, the ChannelFireball Pantheon BUG deck of Utter-Leyton and others, and the TCGplayer Constellation deck by Conley Woods all played this in the sideboard. It even saw maindeck play in some versions of BUG. 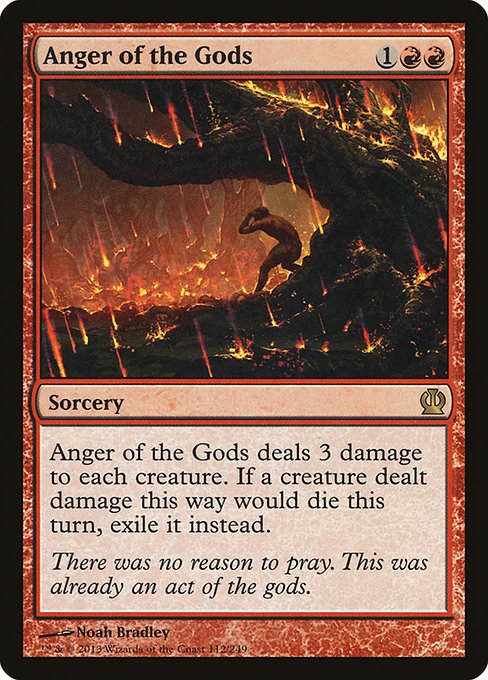 Anger of the Gods is the red equivalent of Drown in Sorrow. The deck that defined the block format online before the Pro Tour, and one of the top decks at the Pro Tour, was a deck known as “RG Elspeth”. It’s basically a RG midrange deck that ramps into Elspeth, Sun's Champion at the top of the curve. 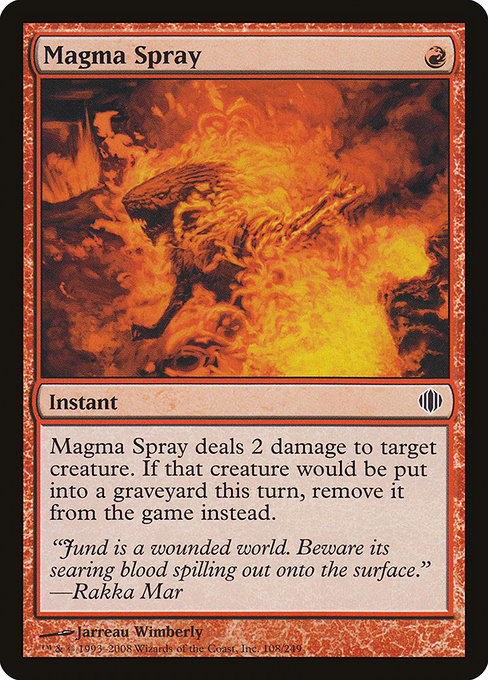 Magma Spray is unique as the most efficient one-mana general removal spell in the format. It does two damage for one mana, often destroying creatures up the curve. It does not hit players, which limits its maindeck potential, but it’s a strong sideboard option. The fact that it removes a creature from the game may have utility going forward depending on what is printed. 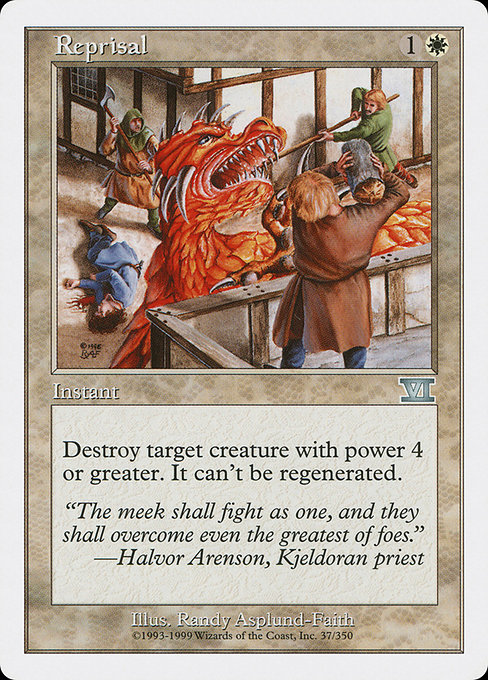 Reprisal is white removal against large creatures like Polukranos, World Eater. It saw a lot of sideboard play in block, and it’s a great option for white decks if large creatures play a big part of the future Standard format.

Efficient enchantment removal comes in various forms for various colors, and those spells are going to play their part in the coming Standard format. The commonly played pieces are: 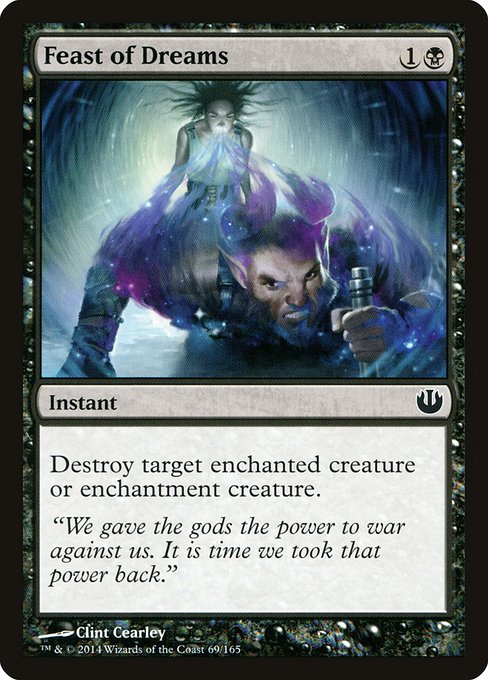 Feast of Dreams was a very popular sideboard card, found in almost every black deck. While it doesn’t draw heads in Standard, the block format is full of enchantment creatures, particularly the bestow creatures like Boon Satyr and Herald of Torment.

It also removes one of the block’s most defining cards, Courser of Kruphix, and dedicated hate against enchantment decks built around Eidolon of Blossoms and Doomwake Giant. Feast of Dreams is most impressive because it’s removal for two mana, the block constructed equivalent of Doom Blade.

There simply isn’t much cheap removal in the format, and in matchups where it has targets, Feast of Dreams is among the most efficient. Enchantment creatures are going to play a big part in future Standard, which will be another reason to keep an eye on Feast. It will certainly be played in sideboards, and, though unlikely, could even see maindeck play depending how the next few sets turn out. 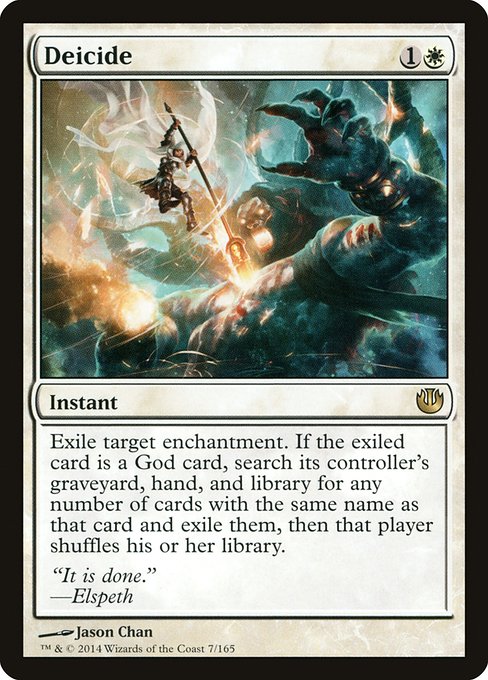 Deicide is enchantment removal for the color white. The biggest upside to the card is how it eliminates indestructible gods.

Unravel the Aether is a highly-functional sideboard card that comes with the benefit of being able to remove indestructible gods and artifacts by shuffling them away. While artifacts are not major players in Standard or block, the future may be different. Unravel the Aether is going to see play in sideboards as dedicated enchantment removal, and it will become an all-star if artifacts become relevant in Standard. 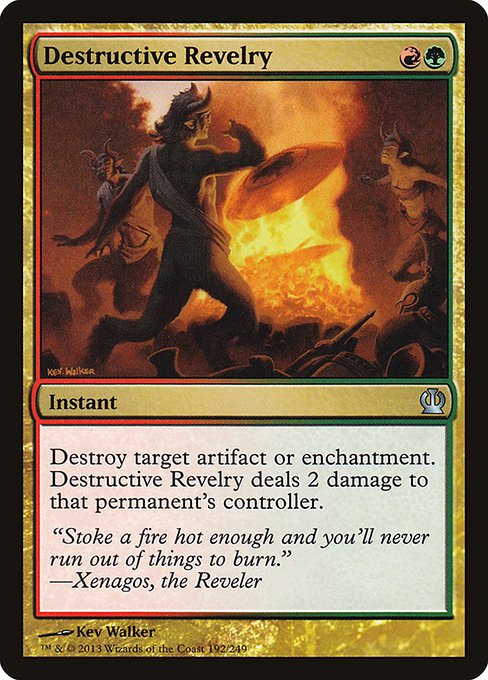 While it comes with more difficult colored mana requirements than other options, Destructive Revelry is essentially Naturalize with a burn spell tacked on. This is obviously great for aggressive decks, but it’s of particular note because the burn can be redirected to a planeswalker, often to amazing results. This makes it a threatening control card.

One class of card that saw significant play at the Block Pro Tour were the color-hating cards from Theros. They are, as follows: 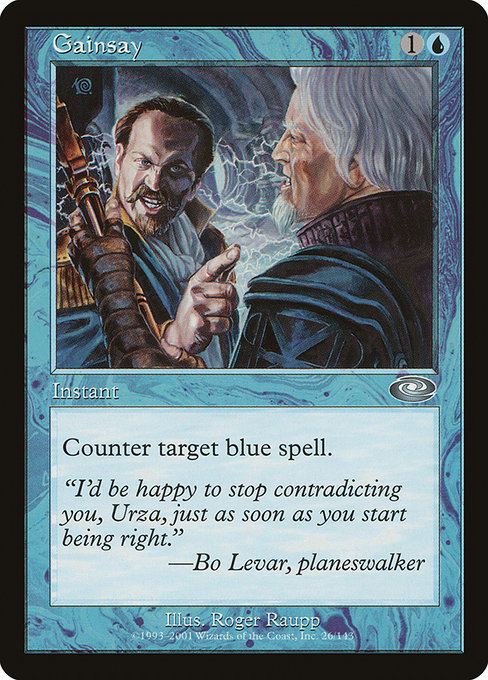 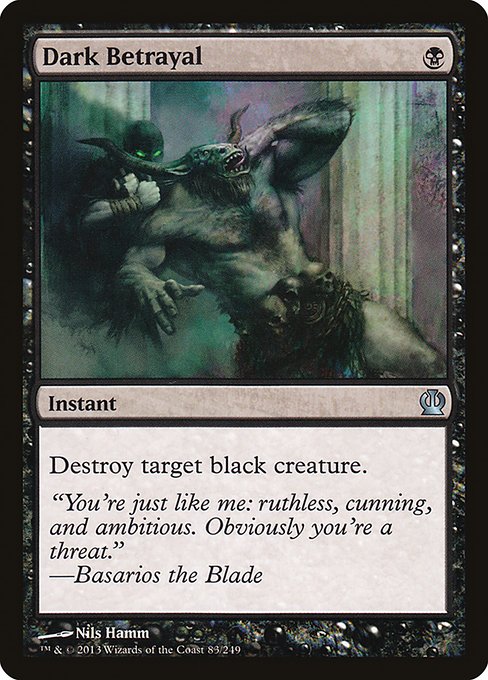 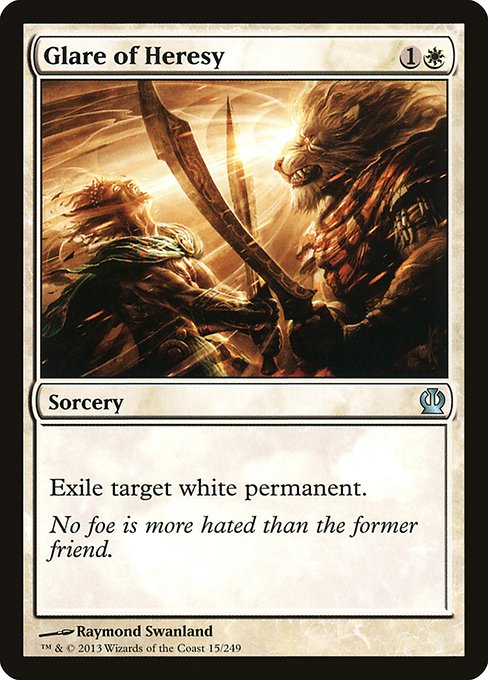 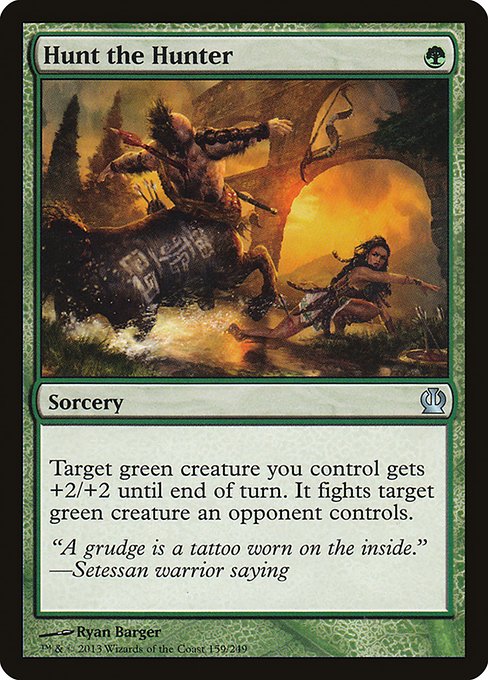 Efficient forms of removal and disruption against specific colors, these cards are necessarily among the best sideboard options in the format. They will be just as powerful and efficient in the coming Standard and will be among highly played. Their specific popularity will depend on the texture of the coming metagame.

Not to mention Hunt the Hunter combos particularly well with Sylvan Caryatid.

I’d like to note that Peak Eruption is not included because it is not in the same class. Peak Eruption is not actual creature removal, which makes it worse than the rest. It’s still useful as land destruction, and as direct hate against Chained to the Rocks, but it remains to be seen if this is going to be valuable in future Standard. 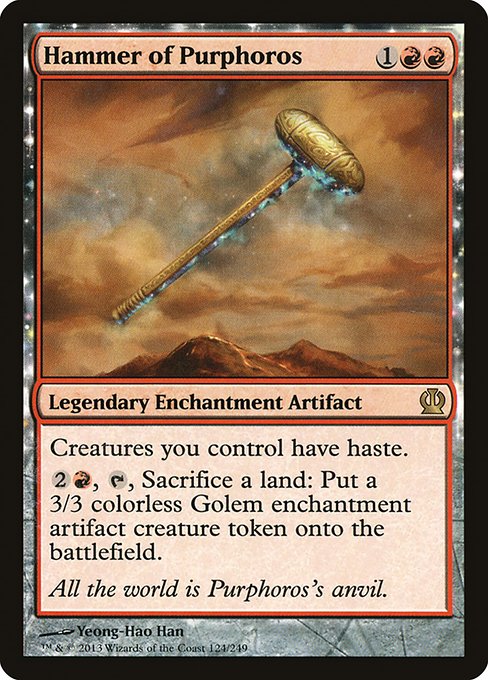 Hammer of Purphoros was a common sideboard card in red sideboards. It’s great against control strategies, where the haste ability gets creatures in past removal, turning them into pseudo-burn spells, and the ability to repeatedly generate Golems can be used in a war of attrition to outlast opposing removal.

It saw play in Red Rush Aggro, and was commonly seen in the sideboard of RG Elspeth. Hammer of Purphoros has seen Standard play, it’s proven itself an even bigger player in block. 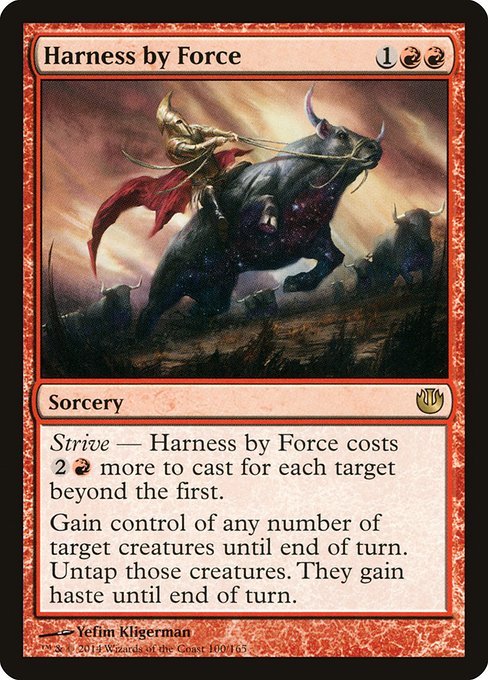 Harness by Force is an upgrade on the classic Threaten. It has a lot of value in aggressive decks against large creatures, where it creates a large tempo swing for one turn, often enough to win the game. This card has a huge upside with Strive, allowing it to hit more than one creature, which makes it comparable to Insurrection. 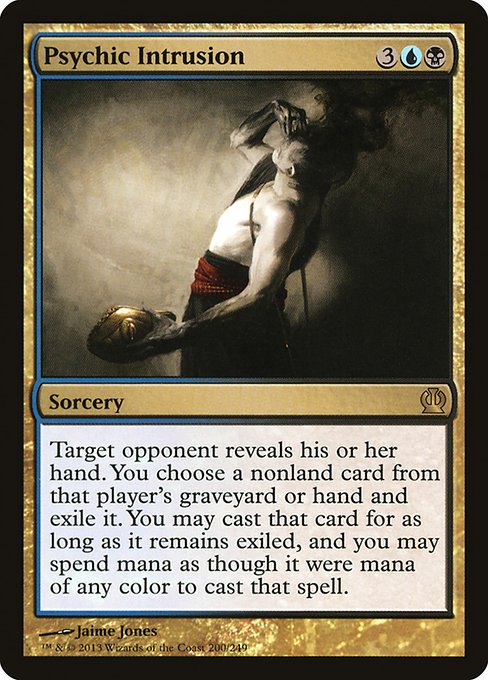 Psychic Intrusion saw play in the sideboards of BUG decks as a way to punish slower, more controlling decks. It’s effectively an expensive discard spell that doubles as a form of card advantage/card selection. It’s narrow, but it will play a part in the sideboards of future control decks.

The cards I shared today were among the most popular and successful sideboard cards at the Theros Block Pro Tour--cards I expect to play a part in the coming Khans of Tarkir Standard format. I’m interested in hearing what others make of the format, and what cards you expect to see this fall.