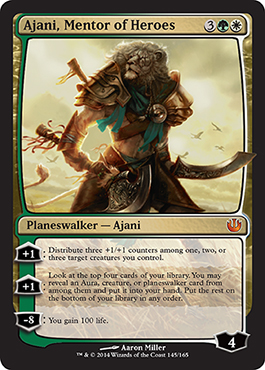 Jeff is a good friend of the Brainstorm Brewery brand and contributed to the site when we first started out. He's been a guest on the podcast and no matter how he's getting the word out, the word is "Brew".

Whether it's the RUG flash deck he popularized a year ago in Standard, the various Knight of the Reliquary decks he plays to great effect in Legacy or his determination to break Delver of Secrets // Insectile Aberration in Modern, Jeff is always brewing.

Those of us who watched the Star City Open this weekend noticed he managed to finish fourth with a new brew.

A lot of people are talking about Ajani, Mentor of Heros following Jeff's strong showing. Is there financial opportunity here?

I will point out that when Theros was spoiled, a deck running Ashiok. Nightmare Weaver managed to finish Top 8 of an Open. The card shot from $15 to $25 on SCG. I managed to get some for $12 and while I sold a few for around $18 on TCG Player, the rest I outed for about what I paid. I made some money on some of the copies, but the price plummeted too quickly for the spec to really pan out, and the opportunity cost of having so much tied up was a real issue. I was very, very lucky to make any money at all as reality quickly caught up with the weaver of nightmares and soon he became a nightmare for speculators.

If you think Ajani may be in the same boat, I would stay away. If you have them, sell into the hype. If you have Advent of the Wurm this may be your last chance to cut your losses. I think this deck's success is about 80% pilot, 10% unprepared metagame and 5% favorable matchups. That means I put the odds that Ajani will maintain its current value at about 5%.

Zac Hill was on Brainstorm Brewery for the set review this week and if you don't want to listen to the entire episode, the tl;dr is that Moldervine Cloak was played in its day and Ajani's +1 is worth 3 mana minimum. Irrespective of how "win more" his ultimate is, if you have targets, Ajani's +1 is very good. I don't like his middle ability very much, but it worked out in Jeff's deck. Mana Confluence and Temple of Malady may be all decks like this needed to grow the beard, but I personally remember my Ashiok venture too acutely to try and spec on Ajani now. The card could be good, but with supply low, hype from a good finish and pre-sale priced of planeswalkers being out of control, I'd say this is a poor time to buy.

3 thoughts on “More Junk on the Free Side”