This past week I spent much of my time trying to think of a witty way to introduce this article. Most of my efforts were on the title, which as you can see, did not end with anything particularly creative.

In the case where creativity is the furthest thing from you like all of your spells seem to be when you are drawing six lands in a row, the best thing is to go for the straightforward approach. There were many great attempts like, ‘Pulling the RUG Out From Under M15,” or, ‘BUGging you about more M15 cards, but since I already covered all the green cards last week, I had to throw out those titles.

I was going to make some Nephilim reference but no one knows which one is which anyway (it’s Yore-Tiller Nephilim for reference). In addition, the white and blue cards ended up being longer than I thought so you'll have to tune in next week for the finish of my Nephilim metaphor. There are many interesting white and blue cards seeing print in M15 though so let’s delve in. 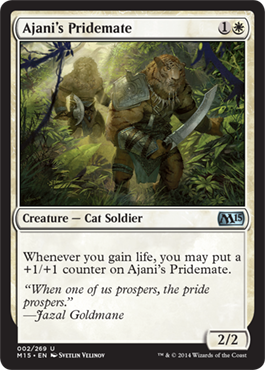 Ajani's Pridemate is always a card players try to include in their decks when it’s legal, but cards like this rarely work out. There must be a critical mass of ways to gain life and reasons to try and do so. For now, neither of those two things are true so my advice is to stay away from the Pridemate and focus more on Ajani himself.

Since I talked about him in a previous article I won’t spend much time on him here, but he is a solid planeswalker that should see some play. Only one white mana makes him the most splashable of his versions as well and I’m anxious to see if that makes an impact with the newest iteration of our friendly neighborhood cat warrior. 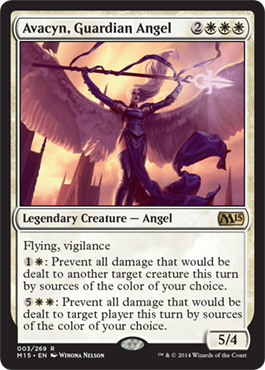 Avacyn, Guardian Angel seems like yet another downgrade in the angel category. First we had Baneslayer Angel and she was a serious powerhouse. Next came Archangel of Thune who proved not only to be a Modern combo but a synergistic combo in Standard. Now we have Avacyn’s newest incarnation and she seems like yet another step down in the five mana angel classification.

She does have a plethora of abilities that all seem to work well together for both an aggressive and controlling deck so she may find a home, but I think the modest hype does not have much ground to stand on. Luckily she’s an angel so she can fly her way past all of that and try to overcome the limitations of her five-mana casting cost. 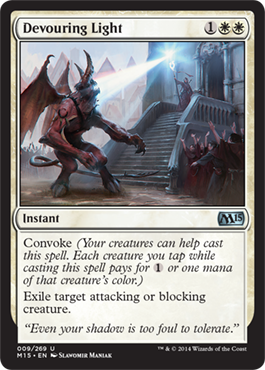 Devouring Light is an exciting addition to white’s removal suit. It’s great on both offense and defense. The convoke ability in general is a powerful tool to try out in Standard again. My intuition tells me that convoke will prove more impactful this time around than last. With white getting some token producers like Raise the Alarm, convoke looks much better. 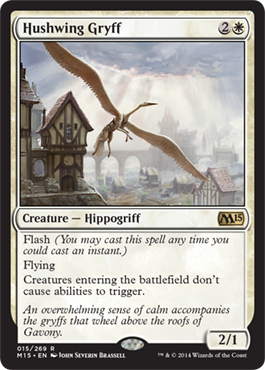 Hushwing Gryff, aka Torpor Orb with legs, is a powerful tool in Modern and Legacy, but as for Standard, there are not many abilities we are looking to stop. That may change with the next block so remind yourself this card exists when the format rotates--or maybe I’ll do that for you, so stop back and read some more of my articles down the road. 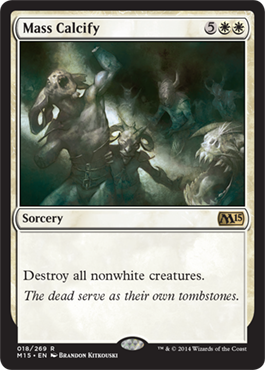 Mass Calcify made the list for what it represents rather than for the card itself. Sure we may want a Plague Wind that keeps our white creatures around, but that’s doubtful. Mass Calcify replaces the Day of Judgment or Wrath of God spot in the set and confirms Wizards preference for printing these types of effects in a block rather than in a core set. Maybe we will have a Standard format without a four-mana sweeper. Now wouldn’t that be interesting? 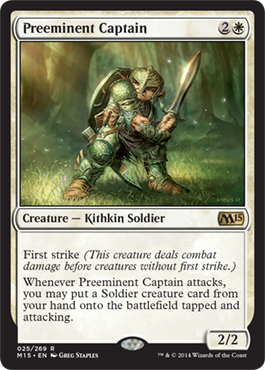 Preeminent Captain seems like an interesting and powerful reprint. This Morningtide rare did not have a chance to shine in the face of the Faerie menace during its original printing, but this time may prove better for the Gray Ogre.

If you search for Standard-legal soldiers you’ll find three pages of choices at your disposal. Brimaz, King of Oreskos and Dawnbringer Charioteers are among the best but you can cheat even more expensive threats like Boros Battleshaper into play with the ability as well.

Unlike Goblin Lackey or Warren Instigator, Preeminent Captain is only required to attack, not damage your opponent, so that makes him a bigger threat than you might think at first glance. Only time will tell if Preeminent Captain will finally get his time in the spotlight but when building your aggressive white decks, keep this guy in mind to lead your soldiers into battle. 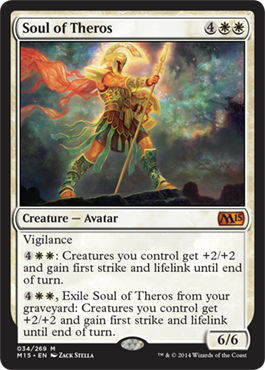 Soul of Theros may be the most innocent looking of the Souls but his ability costs more than average because of its potency. First strike and lifelink are incredible abilities to pin together especially when all of your creatures get a power and toughness boost.

While I don’t think this Soul is the one that will be the most impactful, it’s quite possible that a white Nykthos, Shrine to Nyx deck would utilize a powerful six drop like this. All of the Souls seem to play well with Nykthos and this one is definitely no exception. 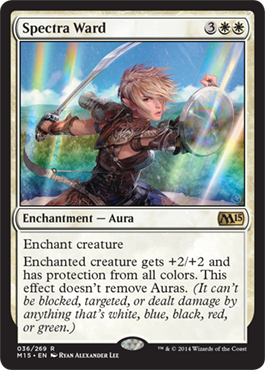 Spectra Ward is getting some press, but if five-mana enchantments are winning games in Standard, I’ll be extremely surprised. It’s certainly a powerful effect and might combo well with all our hexproof threats for the next couple of months, but I doubt investing your manna in this enchantment is what you want to be doing in a competitive environment. The first time your creature gets killed in response to attaching this aura, you’ll remember why we don’t play the card type aura outside hexproof decks. 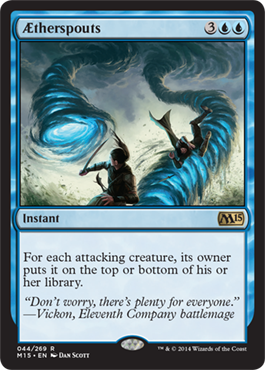 Aetherspouts is difficult to pin down. On the one hand, we have had cards like this before--Aetherize comes to mind as a current Standard-legal card. What differs here is the ability to remove some of the threats permanently from the battlefield.

The problem is that this blue spell essentially uses the punisher mechanic (giving your opponent the choice of what happens with your spell). If this bounce spell is cast against you all of your creatures can go to the bottom of your library or you can stack your draws so you’ll have gas for the next couple of turns.

My initial opinion is that this card is not good enough because it gives your opponent the choice. If you had the choice as the player who cast this spell, it would be completely different, but since you don’t have control over what happens, your opponent will choose which method is best to defeat you. I admit that I may be completely wrong on this one and I might lose to it repeatedly though so test this one out for yourself before laying down judgment. 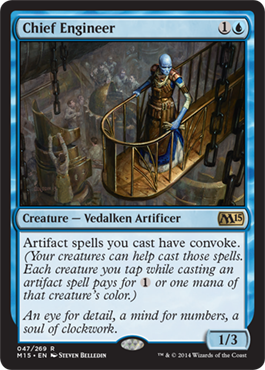 Chief Engineer seems like a card that’s either completely broken or utterly unnecessary and only testing will help us figure it out. I doubt there is a home for this artifact enabler in Standard though because we do not have the tools to utilize him properly, but in older formats he could prove to be a powerhouse. It seems like most players share this opinion, now all we need is someone to prove to use whether it’s good or not. 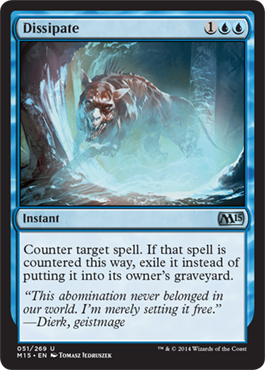 Dissipate is a great role player to have access to in Standard, but it is quite confusing alongside Cancel in M15. Dissolve is still better as well so these two spells seems like wasted space. On a more positive note, the fact that there isn’t a better Counterspell is good news for anyone trying to win the game by resolving spells. 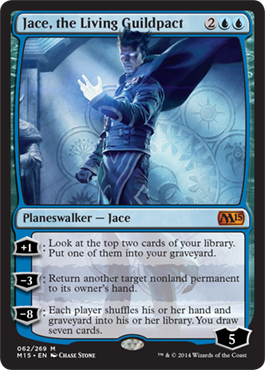 Jace, the Living Guildpact has drawn the line in the sand and players have stepped to one side or the other. In true feuding fashion, players have been at each other’s throats on social media about the power or lack thereof with the newest blue planeswalker.

My opinion is that he may see some minor play but ultimately will prove not a big enough impact to win tournaments. I would have much preferred to be able to scry 2 each turn, but that’s not how this Jace turned out. 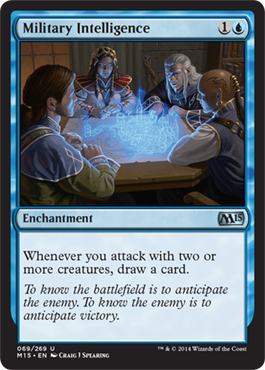 Military Intelligence is my favorite blue card in this set by a lot. I think it has an immediate home in Mono-Blue Devotion and it might help the archetype stick around post-rotation. Drawing cards is the best thing you can be doing in Magic and it’s no different in an aggressive deck. More cards means more creatures to attack your opponent with. My blue decks could certainly use some Military Intelligence to help them win some games. 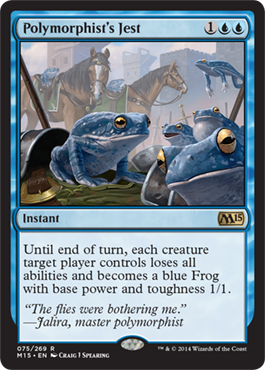 Polymorphist's Jest and Turn to Frog have been the type of effect that never sees play in competitive formats. With how good monstrous has proven to be, these type of effects could start seeing more play though. Again, they seem like exciting additions to Mono-Blue Devotion.

Void Snare is also an interesting new take on a bounce spell. I’m not sure that it will usurp Cyclonic Rift, but having an Unsummon effect back in Standard can be powerful depending on what the format shapes up to be. 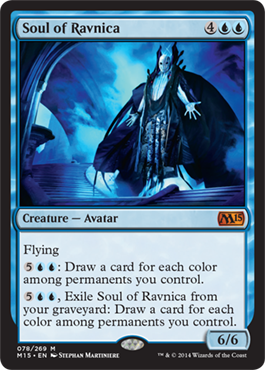 Soul of Ravnica seemed great until this afternoon when I realized that not all of the Soul’s abilities cost five mana each. The five-mana ones pose more possibility than the more expensive ones like this. Granted, each Soul seems best suited for extremely different style decks, but still seven mana is a lot of an investment. It seems like Silence the Believers will be silencing any supporters sooner rather than later on this point as well.

Next week I'll finish up my thoughts on M15, so make sure to stop back next week!