Every once in a while at a prerelease, there is a color or faction to pick and it isn't particularly close. Ever since "seeded" packs became a thing, players began theorycrafting trying to see which box to pick to give them the edge. Sure, you get 5 random packs, but that one seeded pack will most likely determine what you play. Not always, and my post from a few days ago revealing the Green-Red deck I had splashing white for Constricting Sliver and Piercing Light seems a little silly when you realize I opted for the black seeded pack and had practically no black playables. I reasoned that black had the best promo of the bunch and the bet removal also in the form of Ulcerate and Flesh to Dust so I went with it. I was not alone. 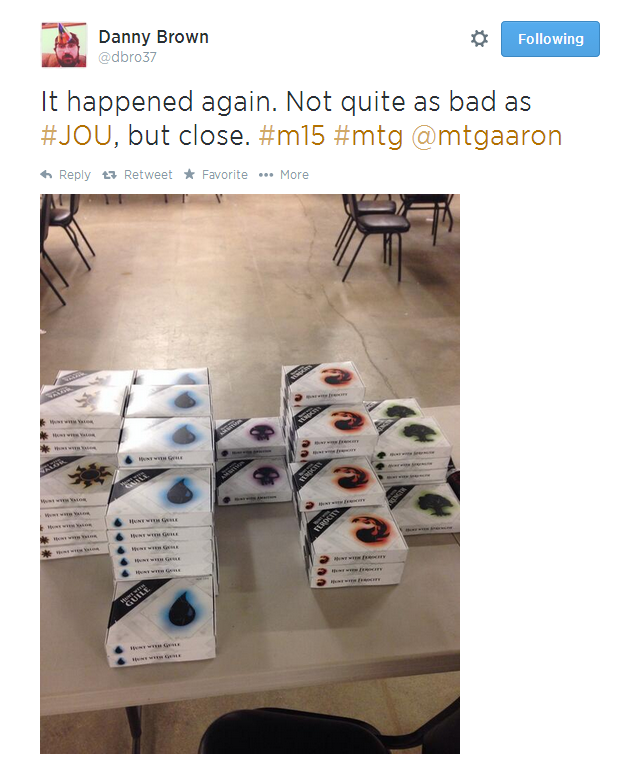 Also, not many of you are following Danny on Twitter, so go do that now.

However, as the weekend progressed, things shifted a bit.

UW? Although those colors seemed very weak at the outset, having flying creatures can get there and blue white has Welkin Tern and Sungrace Pegasus while black has ....Carrion Crow and "Hope I topdeck an Ulcerate"[card image not found].

What does all of this mean?

It would seem that, super anecdotally, blue-white fliers can be a real thing. Would you want to force it in your next sealed pool? Maybe not, since you're not guaranteed a Resolute Archangel. But maybe. I expect UW skies to be a legitimate draft archetype as always. But it may not be as bad in sealed as originally pontificated.

3 thoughts on “The Changing Metagame”