“So I’ll make a bold claim that’s been gnawing at the back of my mind for a couple of months now, even though I’ve pushed it off because it goes against all precedent: Modern prices are not going up anytime soon.”

I wrote that several months ago, around the time everyone was prepping for the oncoming Modern season and the wondrous prices it would bring. I felt the pressure at the time of writing that, because I was definitely fighting against the “conventional wisdom.” In retrospect, I’m really glad I acted on my gut there, because as we all know Modern prices stagnated horribly this summer, and in many cases dropped outright.

There’s another relevant paragraph from that article:

“When the next catalyst comes, aggressively buy staples across the board.”

That time is now. 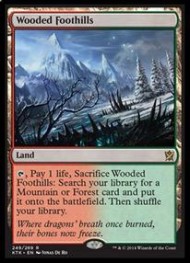 Allied fetchlands are here, and the proverbial hammer has fallen on Modern. It’s time. And it couldn’t be a better one.

Everyone is excited about Khans of Tarkir and the wedges it brings. I am too. But I’m much more excited about the future of Modern, and Khans is the reason why.

The last time there was a mass migration into Modern was when Modern Masters was reprinted. The reason for that was because people suddenly had a way to access the format. Easy packs mean that a whole slew of people who hadn’t been able to touch the format before could after busting a few high-dollar rares. We saw the effects of this immediately, with Tarmogoyf and Dark Confidant actually increasing in price from where they were before.

But it wasn’t just the flagship mythics. It was a slew of other cards in Modern, from fetchlands to Splinter Twin to even stuff like Serum Visions. So many new people entered the format that everything that wasn’t reprinted saw steady gains.

That’s the world we’ll be living in again soon.

Everyone else will be excited about Khans, trading for the new Standard, picking up their specs and their new decks, and that’s great. In fact, we should also be interested in the Standard specs we have faith in. But I think it’s going to be vital to spend the next month to two months trading the Standard cards for the things you can get for Modern. I think it’s handy that fetches are coming out now right at rotation, because it means people will have better things to do than worry about what may happen six months from now.

But price increases are coming in the next 12 months for a lot of Modern cards.

So if we accept the fact that mass reprints are coming, the next question is how to best hedge against that risk. I think there are a few valid approaches.

1) Try to guess the likely MM2 candidates. There’s certainly merit to this, since there are some big cards we can expect to be reprinted. For instance, I don’t think Liliana of the Veil or Snapcaster Mage are the safest places to park money heading into next summer. You can spec into the rest of the big cards in the format and hope for the best, which will likely yield profit as a whole.

3) Aim for really recent cards that you think have Modern potential. Considering they set a limit on the first Modern Masters set in terms of time period printed, something along the same lines for the next one means that cards from the last couple years might miss the cut.

The other big question is the Zendikar fetchlands. A lot of people have speculated they’ll show up in Khans of Tarkir block. I personally disagree with that, considering that with the enemy painlands in M15 and allied fetchlands now we have balanced mana in Standard. Putting fetches into the block would ruin that balance.

Furthermore, with allied fetches taking some of the pressure off the Zendikar copies, it means a huge reprinting may not be needed, and a smaller reprinting in a supplementary product could do the trick.

I don’t have a comprehensive list of cards to buy right now, mainly because this is all so new I myself haven’t come up with what an optimal list would look like. But I’ve laid out my thoughts on the general places to look above, and I’ll be coming up with a list for next week.

The beautiful thing about this situation, and it’s something really rare these days, is that I don’t think there’s a rush here. By all accounts, we should have a few weeks if not a few months to be ahead of the wave, and that’s an awesome opportunity.

Thanks for reading (and enjoy the spoilers!),

11 thoughts on “Unlocked Insider: And the Hammer Falls”