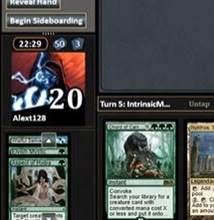 Like so many others, I'm not a fan of MTGO version 4. I tried the Beta a few times with little success, and when the shutdown of version 3 came in July, I tried a Cube draft and found myself dealing with a completely unresponsive and non-functional client. It was a very negative experience, and it resulted in me shutting down MTGO for more than two months. Yesterday, I wrote about the broken PTQ and the less-than-stellar responses to it by MTGO management. This stuff is unacceptable, clearly.

But Khans of Tarkir is now online, and dammit, the format is a lot of fun. Last weekend, I booted up MTGO for the first time in months and played two Sealed events. My total record was a not-too-stellar 5-3, but what really matters to me at this point is how the client ran.

I'm relieved to say that I made it out of the two events without too much of a problem. The client was laggy and generally slow to respond, but it only crashed once and reloaded quickly. The cards still look absolutely awful, but at least all of the artwork loaded this time. Events still inexplicably open in new windows, but at least I didn't accidentally drop by closing one of them. All in all, not having to file for compensation is a success with this client.

It's easy to pile on the MTGO team for this nearly universally hated piece of software, but it's important to remember that these are people who are actually trying to do a good job. Presumably they all love Magic, and they want to see it succeed. So I'm going to list six things that are objective improvements over the previous client. Yes, version 4 is worse than version 3 in many ways, but at least it has these facts going for it:

The old client asked whether you would like to mulligan your hand, and the options it gave were "yes" and "no." Many a player has mistakenly thought, "Yes, I'd like to keep this hand," clicked yes, and mulliganed. Thankfully, the new client has buttons that say specifically "keep" and "mulligan," which simplifies things significantly. This is an improvement that will result in fewer misclicks.

2. Showing the Turn Number in a Reliable Location

In version 3, the turn number was only available in the game log, meaning that you would often have to search a wall of text in order to figure out which turn you were on. The new version of MTGO lists the turn number right next to the steps and phases bar, meaning you can always figure out if this is turn five or six at a glance. 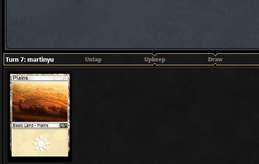 If you just need colorless mana, you can hold "M" on the keyboard while clicking your dual lands to have MTGO auto-select the first color listed on the card. Yes, this would be even more helpful if you didn't have to hold down the key and the program would just auto-tap duals after all colored mana costs were paid for a spell, but it is an improvement over version 3, regardless.

4. Avatars and Life Totals are Bigger

It's a small thing, but if we're going to be able to customize our avatars, they should at least be big enough to discern what they portray, right? This was not the case on version 3, but version 4 has increased avatar and life total size:

5. Building While You Draft

One of the biggest improvements with version 4 is that you can build your deck while you draft. Being able to sideboard some copies of a card, decide on cuts while drafting the last pack, and maintain your progress after the draft is complete is one of the most important improvements made between the two versions of MTGO. Being able to see who you are passing to or being passed to by is nice, too.

6. Being Able to Group Creatures Separately with a Click

Most players build their decks with creatures and spells grouped separately, and MTGO version 4 adds a nice little functionality that handles separation automatically. It saves a few seconds, and those seconds add up (although ultimately get lost in the wait between rounds, I suppose). 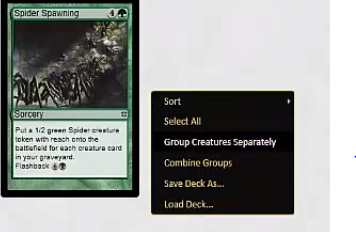 If You Can't Say Something Nice...

There's not a lot of good to be said about MTGO version 4, but little things like this can at least give us the hope of a possibility of a chance that this program is headed in the right direction. Now, if we could just get small issues like basic functionality and stability addressed...

One thought on “Six Nice Things About MTGO Version 4”