Upon the completion of the Pro Tour, things were going exactly as I had anticipated. The metagame was beginning to be defined and key cards were rising in price. This was particularly true for some of my favorite targets, including Thoughtseize and Theros block Temples. Temple of Epiphany had an exceptionally impressive run.

It appeared to be another profitable rotation in the books.

Then something rather unexpected happen. Cards were peaking and then dropping back down in price! Some were moving lower quite rapidly from a relative standpoint.

Allow me to explain through example.

Some of our very own QS Insiders managed to sell sets of Temple of Epiphany for over $50. I thought they had sold prematurely. I was certain these would peak at $15 a piece, enabling me to sell my set for at least $60. Shortly thereafter, the price on the U/R temple dropped back down quite suddenly. I finally managed to sell a playset this past weekend…at $39.98. Ouch. 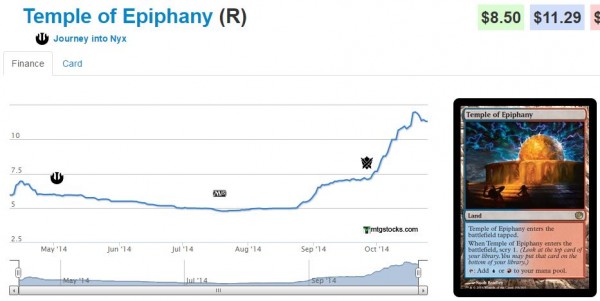 In reality, the chart above doesn’t do the price movement enough justice. What appears like a minor blip is actually an inflection point reflecting a fundamental shift in this card’s trajectory. Now instead of anticipating a $15 ceiling, I believe this temple may have peaked. More on this later.

Temple of Triumph was also supposed to be on a rally. It is currently one of the most played temples in Standard, yet the price chart looks much like that of Epiphany. 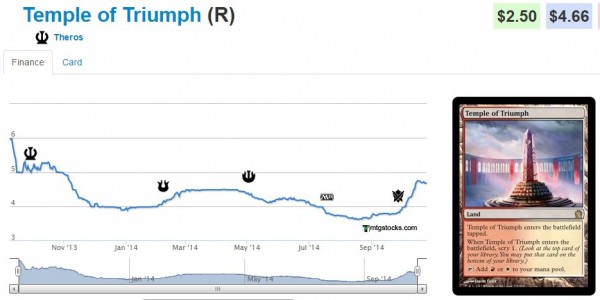 The negative trend on this temple is emphasized by Card Kingdom’s recent drop in their buylist price. They were paying over $4, indicating their confidence in this card’s popularity. Now the spread on this card is much less favorable – retailers are no longer so confident, I guess. 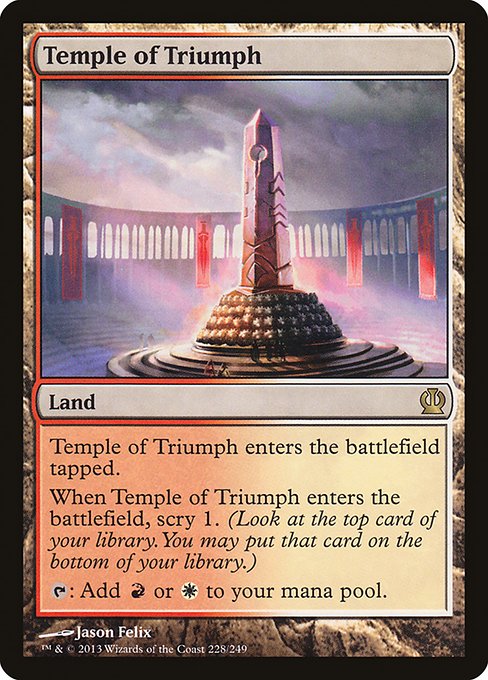 I’ve Got a Bad Feeling About This

Really, my confidence isn’t as shaken as the header indicates. I just couldn’t resist another Star Wars quote.

But the fact of the matter is, some things are drifting downward. I fully expected breakouts from Khans of Tarkir to drift lower, don’t get me wrong. Cards from the newest set always start very high as players scramble to find the copies they need for their decks. But as more and more packs are opened (and believe me, Khans is very popular and will be opened a ton), the more supply is available. The more copies of a given card are opened, the lower the price.

Just take Polluted Delta as a powerful example. Everyone and their mother knows this card is highly in demand. Blue fetches have a history of generating significant value. But not immediately upon their release. Supply runs rampant, and the price faces downward pressure as a result. After selling my set of Deltas for around $60 each to a buy list a couple years ago, I finally managed to reacquire them for my Legacy deck at an average cost of about $13.75 each. You know what – these will probably still go lower. I was impatient. 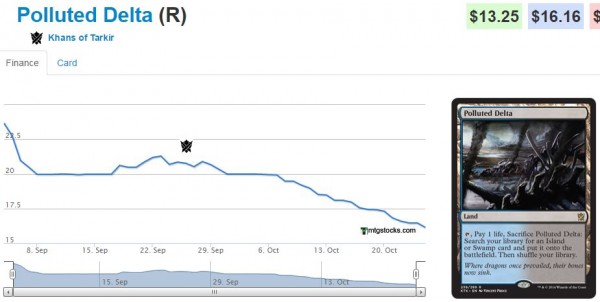 But the price trajectory on Khans cards don’t phase me. I expected these drops. What bothers me is the recent negative trend on some Theros block cards. Drops on cards like Sylvan Caryatid are harder for me to rationalize. That card is everywhere but trade binders, yet it appears to have been drifting downward this past week. 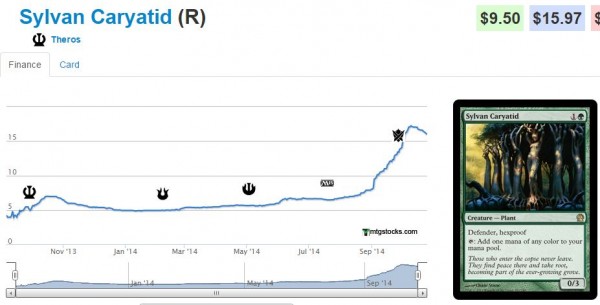 I fully believe Sylvan Caryatid deserves the price it currently maintains. As I mentioned before, this card is everywhere. Eight copies showed up in last weekend’s SCG Standard open. Two out of the three undefeated decks from day one of GP Stockholm also ran the full playset of Sylvan Caryatid. It has made its presence known.

I can think of three possible explanations for the recent downward trend in popular Standard cards. Perhaps the three factors in combination are applying this negative pressure.

First, the recent price jumps in these Standard staples was very rapid – perhaps too rapid. Many speculators were actively monitoring the Standard metagame during and shortly after the last Pro Tour. Perhaps players dove too deeply into these specs. Now that prices have jumped, those speculators are listing their excess quantities on the market, with the surge in supply applying downward pricing pressure. This could also explain why some of the temples aren’t being catalyzed higher as I initially predicted. Enough people had the same idea as me, and once things became significantly profitable, all of us speculators decided it was time to move our copies, resulting in a supply spike.

My second theory is that the metagame is simply still in flux, and quite diverse! According to Star City Games’ deck naming convention, there were five different decks that showed up in their Standard Open Top 8 last weekend. That’s actually quite diverse. Perhaps we finally have a Standard format where people could play the deck they want to play rather than the best deck of the format in order to win a tournament? It may be too early to tell, but so far I’ve really enjoyed the diversity and evolution of this Standard environment.

But the tradeoff for an exciting Standard metagame may be that there aren’t many true “staples” that every Standard player needs a set of. Before rotation, so many decks needed their playset of Mutavault. But someone doesn’t’ need Sylvan Caryatid to win a Standard Open – they can just play Mantis Rider or Prognostic Sphinx based decks instead. Because of this diversity, demand on any individual card can remain in check.

My third and final theory may be the simplest – perhaps the truly dominant cards in new Standard are mostly from Khans of Tarkir. No matter how dominant a rare may be from the newest set, the price will probably drop as more and more copies are opened. And because there is so much value in this set, sufficient copies are being opened to keep up with demand.

While there are a few really powerful Theros cards, there are only a scant few powerful Standard cards from the smaller two sets of Theros block. Born of the Gods has brought us Courser of Kruphix, but this creature is also drifting downward (although mythic rare Brimaz, King of Oreskos is still on the rise). There were very few inspiring cards from Journey Into Nyx - Mana Confluence and Keranos, God of Storms have been large disappointments in Standard so far.

Because most of the exciting Standard cards from Theros block are from Theros itself, the large and most heavily opened set, this could explain the lack of continuous price increases.

Alone,  any one these three theories may not be sufficient. But perhaps in combination they are generating enough pressures to keep prices in check. It’s still far too soon to call a peak on most of these cards. Temple of Epiphany could equally swing higher depending on how the metagame shifts.

But the initial surge of Standard rotation is over. That catalyst has come and gone, and the dust is settling to reveal what the new prices on Standard cards will become. Because of the recent trends, I’ve been forced to lower some of my trajectory predictions. As a result, I’ve even begun to sell some of my cards which have recently jumped – Temple of Epiphany being the primary example.

This is essentially my recommendation to you going forward. As cards rise in popularity and their price jumps, I’d encourage you to sell into the excitement. You may be missing out on some additional upside, but with the ever-changing Standard metagame, it will be difficult to identify the true peak. I missed out on $3 in additional profit from each of my Temple of Epiphanys simply because I wanted to time the absolute peak. Instead I’m left with a smaller gain than I initially anticipated. The same would be true for those who decided they’d hold their Courser of Kruphix and Sylvan Caryatid hoping for that last leg upward.

The reality is that, other than Pain Lands, there isn’t much in Standard these days that has an upward trajectory. Besides the Pain Lands, mtgstocks.com shows that there were four cards from Standard that have increased by more than 5% over the last week: Hornet Queen from Commander, Hushwing Gryff, and Stoke the Flames. Thoughtsieze was the only card from Theros block or Khans of Tarkir to have risen by more than 5% in the past week. This is further evidence that we have overshot where prices should be and they need to return back to reality.

With this data in hand, my inclination is to sell into price jumps. I am not the type who holds out on certain cards expecting the metagame to move one way or another. I am no expert at anticipating which new Standard tech will break out. My preference is to move in and out of the key staples that should succeed in Standard for at least some chunk of time no matter what. This has driven my move into Temples and Thoughtseize. But from now on, I’m selling my copies into any strength. To me, locking in profits is just more important than timing peaks.

Yes, this means I’m moving my excess copies of Thoughtseize, as I anticipate the price leveling out for the near term. 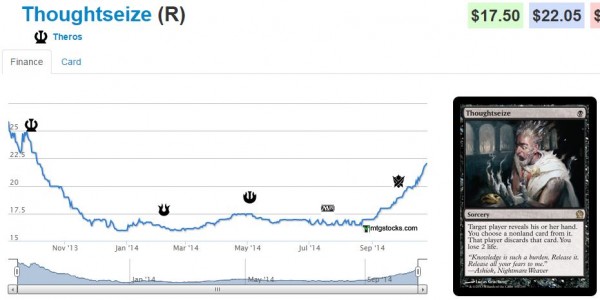 I’m sure I’ll take some heat for this decision, but remember – my goal is to lock in profits and move onto the next target. Thoughtseize has plenty more upside, but it is all for the long term horizon. I don’t see it going much higher than where it is now for months, and there will likely be sufficient supply pressures come rotation to send this card down in price ever so slightly – enough to justify selling now rather than waiting a year for another couple bucks of gains. Time will tell if this move was reckless, but at least I’m profiting no matter what.

That’s the name of the game for me. Make money from my hobby. While maximizing profits is certainly nice, locking in gains can be just as exciting. That’s my MO and I’m sticking to it!

17 thoughts on “Insider: What’s With The Downtrends in Standard?”