Welcome back for a second look at the wonderful new world of Magic Origins. This set is jam packed with flavorful, unique cards that are deeply rooted in Magic history. Last week I talked about the spoiler stand-outs that we knew about.

The discussion covered the new tutor, Dark Petition, Honorable Hierarch, which is more Steward of Valeron and less Birds of Paradise, and also the new sweeper Languish. I talked about Starfield of Nyx, which is almost Opalescence and Replenish put together and our mini parental Siege-Gang Commander Pia and Kiran Nalaar, but my focus was on Day's Undoing because Timetwister effects are quite rare these days. If you want to dive deeper into those cards, check out the full article.

As you can see from last week’s article, Wizards is demolishing all road blocks and forging ahead with fresh designs to intrigue every deck builder in the world. Some sets have only a few cards like this to discuss, but I’m back this week with part two. We have some more dreamy cards floating around in the spoiler-verse so let’s fly away into the realm of possibilities. 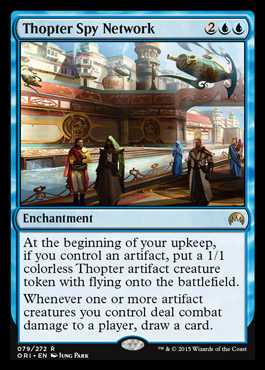 Before you jump off the cliff, you may want your own flying contraption, but in case you don’t have one, the Thopter Spy Network is available to give you your very own thopter. You must control an artifact, because you need some materials to build and tinker with, but with that you can make an endless assortment of flying machines!

Others have tried this to varying effect. There have been planeswalkers in the ‘verse like Elspeth, Knight-Errant, Sorin, Lord of Innistrad and Garruk Relentless that provided continuous benefit as long as they fought on your side. The queen flower herself Bitterblossom deserves mention, but she will never be usurped from her position of supremacy.

We’ve had impersonators like Awakening Zone, Goblin Assault, and even Honden of Life's Web as well as creatures that tried to build their own army throughout the course of the game like Creakwood Liege, Kemba, Kha Regent, and Master of the Wild Hunt, but none of these cards quite sum up our latest edition to this category of cards.

When I saw Thopter Spy Network's full text, I was immediately drawn to it because just like Starfield of Nyx, it has both enabler and payoff all together in one card. While it’s true you need another artifact to get started, you will be rewarded with an endless stream of 1/1 flyers and an extra card per turn. 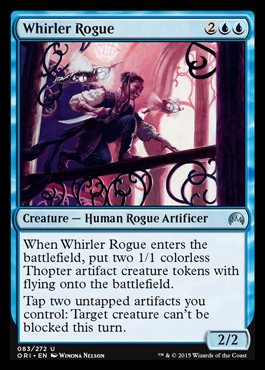 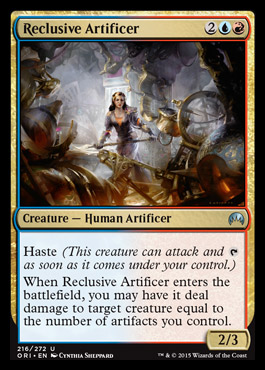 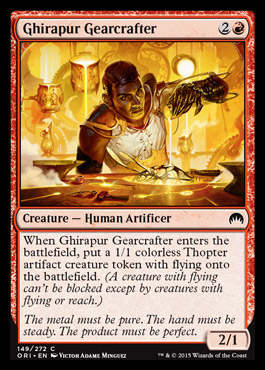 Even though I spoke about U/R Artifacts last week, we continue to gain more cards that could possibly fit into this archetype. My main concern at this point is that there will be too many cards that cost four mana for this archetype to be viable.

In addition to Thopter Spy Network from this week, and Pia and Kiran Nalaar from last week, we also know cards like Reclusive Artificer and Whirler Rogue will be in the set, but a deck can only have so many four-cost creatures. It’s nice that we have Ghirapur Gearcrafter at three mana, but if this deck is going to exist, we need role players that are cheaper than that.

Chief of the Foundry 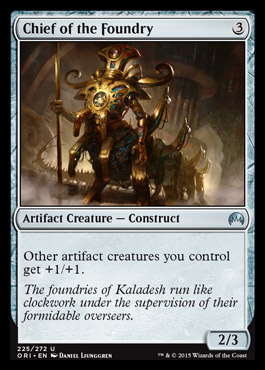 Speaking of cards that are going to help this strategy, let’s not forget the recently spoiled Chief of the Foundry.

This artifact lord is just what the tinkerer ordered. Wizards is engineering this archetype with crisp new designs like this one. Can you imagine constructing your thopter army and then summoning the Chief of the Foundry to lead them into battle? Seems remarkably potent as long as we have one- and two-mana spells to get the gears turning for the deck. 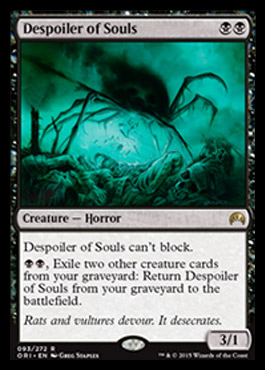 Cards that can recur from the graveyard have always been good. We have another addition to that list with Despoiler of Souls. This card is less like Gravecrawler and more like Ichorid, but seems well positioned to see some play in Standard in combination with cards like Satyr Wayfinder.

It may even bring back Mono-Black Aggro because it pairs well with the recursive Bloodsoaked Champion. This card may not find a home immediately in Standard but we also have Modern to work with.

Even though Golgari Grave-Troll was unbanned, the Dredge deck has never really come together. Now that we have sweet delve creatures as payoff for that deck, we can add another threat to bring back from the 'yard as well. It’s not a zombie to pair with Gravecrawler, but you can bring it back easily in that deck. It’s uncertain whether we need more of that effect or not, but having the option available is great. 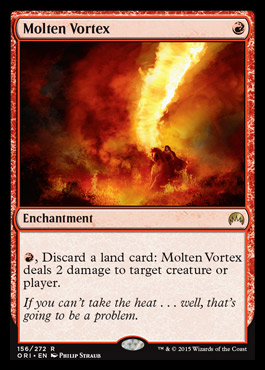 What do you want to do with your lands? Do you want to deal extra damage with them? If so, we have Seismic Assault’s pupil Molten Vortex graduating into playability. 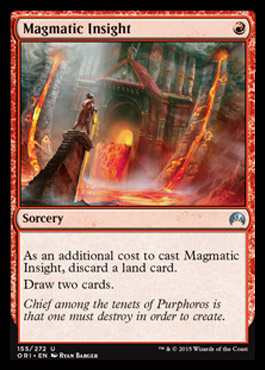 Or maybe you want to grab some extra cards for yourself. We are not taking a Wild Guess, making a Dangerous Wager, or listening to a Tormenting Voice. This time we are harmonizing with nature and gaining some Magmatic Insight. This insight should be gained by any red mage in a variety of formats. I can see this boon from nature being implanted into countless strategies.

We've never seen a card like this for one mana. The next best thing is Faithless Looting, but that’s not quite the same at all. This card may seem innocent, but it’s going to be a powerhouse. 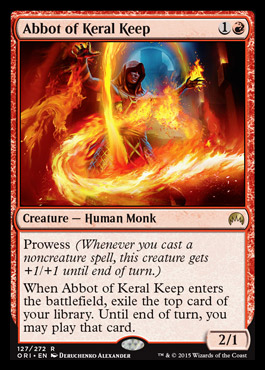 Social media seems prejudiced against our friendly neighborhood monk, Abbot of Keral Keep. Stop judging, people, and give him a chance.

Yes he may seem like Ire Shaman and while that card may yet be playable, this Abbot has more in common with Seeker of the Way or Monastery Swiftspear. They are both aggressive creatures that get benefits from playing spells. It also pairs conveniently well with the previous card, Magmatic Insight.

Sometimes, just like Den Protector, you will cast this card on turn two and that's okay. Other times, you will cast it late in the game and get a free card. Either way is fine and both are worth playing the card for. 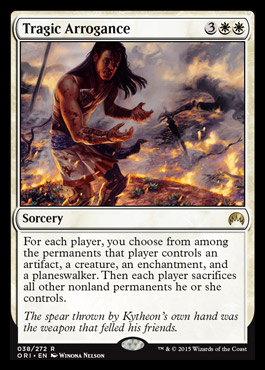 Although we are accumulating quite a collection of fascinating new cards, here is yet another pre-Modern effect that’s been re-imagined.

Tragic Arrogance is more closely templated to its predecessor than the other cards I've mentioned thus far. This white sorcery is a near duplicate of Cataclysm with one huge exception: it doesn't blow up lands. Even if they cost an extra mana, Wizards isn't going to give us any Armageddon style effects any time soon and this card is evidence of that design direction.

If your opponent was able to choose their own permanents to keep on the battlefield, this card would be unplayable like Divine Reckoning was. Since the caster of the spell chooses which cards stay in play, this could be quite impactful.

I can imagine a control deck designed to take advantage of all portions of this card, so they keep all their permanents in play while the opponent is forced to nearly clear their board. We have End Hostilities available, but Tragic Arrogance would fit into a different type of control deck than a typical sweeper. This is another card that will take some time working with it to see if it's strong enough to craft a place for itself in the metagame.

Well, that's all for me this week. What do you think of these epic new cards in Magic Origins? Let me know your opinions of these cards in the comments.