Not long ago in Standard the mana wasn't good enough to realistically play more than two colors--and even if we wanted to Pack Rat was just the best deck anyway.

We're living in a very different world now, one that reminds me of Standard during the original Ravnica block. Powerful gold spells coupled with great mana leads to an environment where players are rewarded by pushing their creativity and greed.

One of the standout decks in Magic history, and indeed a deck that perfectly summed up the era it came from, was "The Masterpiece". The Masterpiece was a nonsense pile that could only have been brewed up in a bout of insanity. It's a beautiful combination of seemingly mismatched parts, and a prime example of how Magic can always surprise us:

I don't have anything so insane as the Birds of Paradise/Wrath of God deck to introduce today. But I do think you should be ready for some crazy decks at Pro Tour Battle for Zendikar.

It's only week one and we've already seen this:

We're coming out of a format where Siege Rhino was the consensus best strategy. I don't think that's necessarily the case anymore.

Part of Siege Rhino's strength before came from the combination of five toughness and a six-point life swing, which a number of decks couldn't handle easily. The mana in today's Standard makes splashing answers to Rhino a lot easier than previously. And the Rhino decks no longer have Thoughtseize to block for them, nor Elspeth, Sun's Champion to follow them up.

How many Siege Rhinos do you think Brian DeMars beat last weekend?

Once you get to four mana, most opponents should have answers to Rhino or be well on their way to killing you. Don't get me wrong, Rhino is still great, but I think it might be its turn to take a back seat to other format pillars.

The most defining card of new Standard at this point is Jace, Vryn's Prodigy // Jace, Telepath Unbound.

While Jace didn't make the finals of SCG Indianapolis, there were tons of copies at the top tables all weekend, and he rounded out most of the rest of the Top 8. It's hard to argue for a better individual card in Standard right now.

Looking over the Top 8, it's clear the aggressive red deck is worth watching, that Dragonlord Ojutai and Gideon, Ally of Zendikar are very powerful, and that a tuned version of Jeskai Black could be a dominant force.

I really like Wild Slash right now with control decks running Jace, and I really like Dragonlord Ojutai because it's just an absurd card that forces opponents to have specific answers.

My initial thought was to build something of a Jeskai Dragons deck splashing black, because I see Silumgar's Scorn as one of the most powerful cards to put in your Ojutai deck. One of the strengths of the Jeskai decks in the Indianapolis Top 8 is the ability to apply pressure, curving Mantis Rider into Thunderbreak Regent. But ultimately I see strength in a more controlling build of the deck, possibly including the aggressive cards in the sideboard.

Basically, I see the deck as an Esper shell, with access to Wild Slash and Radiant Flames to combat red decks and Crackling Doom to beat opposing Ojutais. It's a rough sketch, but I'd happily bring something close to this to a Standard tournament tomorrow:

Access to Crux of Fate is another reason to eschew Mantis Rider, as it's hard to imagine Plague Wind being weaker than a 3/3 creature. 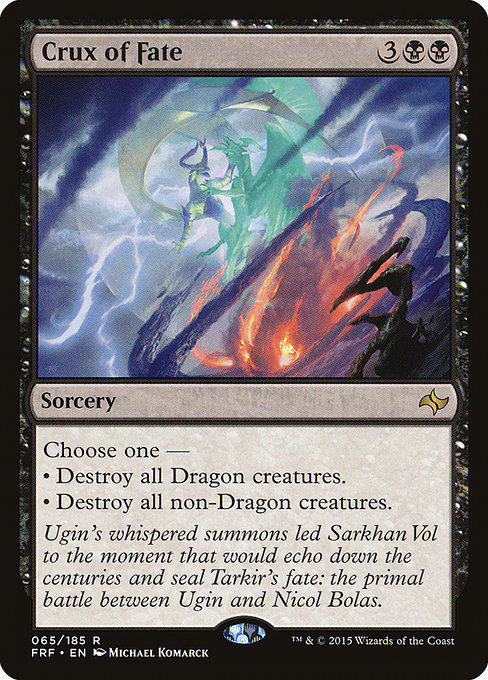 This color combination affords us a quality mix of answers to various threats at every point on the curve, as well as effective answers to Hangarback Walker in Utter End and both versions of Silumgar.

Dragonlord Ojutai is already ticking up in price, and if you don't have your playset already you should get it now. Decks similar to the one above have already seen success, and they should be tunable to beat any expected metagame.

I have a feeling we'll be seeing a serious uptick in Crackling Doom, partly because it's way better in blue decks than it was in stuff like Mardu Midrange before BFZ. Relying on random draw steps to find it wasn't great, but having access to it in your Dig Through Time deck adds a lot of power, particularly in Dragonlord Ojutai mirrors.

If you asked me a week ago, I would have been more excited about Mantis Rider than Crackling Doom, but now I see a high potential for it in both controlling and aggressive versions of non-green decks.

There will be all kinds of crazy combinations in the coming weeks. As I expect a lot of diversity in BFZ Standard, it will be difficult to pick speculation targets other than the absolute most powerful spells.

That said, fetchlands remain a great target, and there will be lots of fetches in literally every deck. There are few targets right now that present as much value as fetchlands.

One thought on “Insider: Four-Color Control as a Solution to Early BFZ Standard”