Last week I laid the groundwork for our Shadows Over Innistrad analysis, looking back on previous set releases throughout Modern’s history to get a better grasp of where our expectations should be going into the set. For those that missed it, you can catch up here. 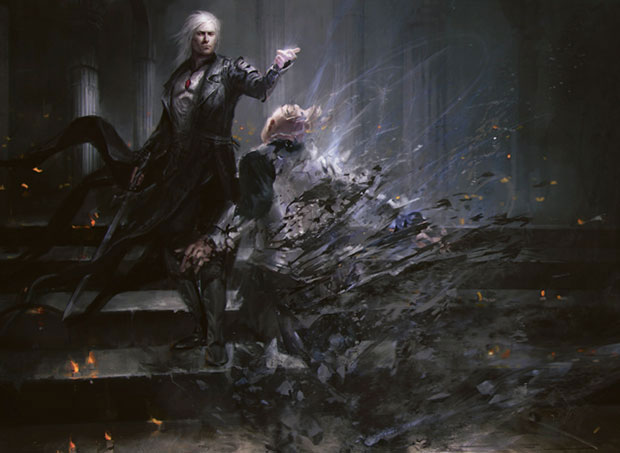 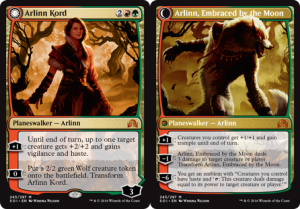 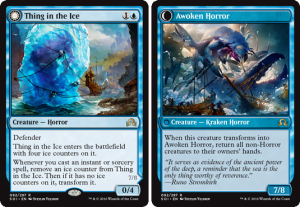 [/tippy]. Today, we’ll be taking a deeper look through the 154 cards spoiled in Shadows Over Innistrad so far and looking at some speculative decklists! With Shadows coming out April 8th and a highly likely Eldrazi ban accompanying it, we’re looking at a double dose of shake-ups to the Modern status quo. Let’s get busy!

I initially overlooked this card in my review last week, but upon second glance I think it “might” be worth a shot. [tippy title="Olivia, Mobilized for War" width="330" height="330"]

[/tippy] is definitely fragile, but that didn’t stop players from running Olivia Voldaren from time to time, and

she even cost a full extra mana! As they share a name, it’s a natural starting point to compare the two versions together, but once you get past their shared pedigree the similarities disappear pretty rapidly.

Olivia Voldaren, as a 3/3 flyer for 2BR, wasn’t breaking any records as far as rate was concerned, yet her activated abilities more than made up for her relatively weak stats. The ability to both shoot down opposing x/1s (mana creatures, Lingering Souls, combining with Lightning Bolt to kill Deceiver Exarch) and steal creatures on a stalled board was the real reason she saw play. A nightmare for Pod decks in that era, Olivia Voldaren almost exclusively appeared as a one- or two-of in Jund lists, often in place of Huntmaster of the Fells // Ravager of the Fells. Where the player fell on the Huntmaster/Olivia spectrum depended entirely on the metagame, as Olivia was better against Lingering Souls/grindy creature decks and Huntmaster was better against blue decks and at stabilizing.

[/tippy] depends entirely on the synergies we build around her. A 3/3 for 1BR is slightly less embarrassing, but still way under curve if we are not benefiting from her ability. As far as that trigger goes, there are two directions we can take her: Vampire Tribal, or Madness.

[/tippy] is a solid aggressive card and great madness/hellbent enabler, except for the slight problem that there really aren’t any exciting madness/hellbent cards we really want to play. Infernal Tutor is probably the best reason to be hellbent, and once we are, what are we going to do? Infernal Tutor for Lightning Bolt? No thanks.

What this list does do, however, is show us how far we can push the aggressive end of Olivia. [tippy title="Asylum Visitor" width="330" height="330"]

[/tippy] is the best “hellbent” payoff I’ve seen, acting as a better Dark Confidant if we can just dump our hand. 17 one-drops helps with this, and being able to play eight Dark Confidant effects means one is more likely to stick.

[/tippy] is interesting, it turns all our Vampires into madness cards and when combined with [tippy title="Olivia, Mobilized for War" width="330" height="330"]

[/tippy] we can chain as many Vamps as we can afford onto the battlefield with haste and +1/+1. This seems cute, but imagine a turn sequence like this:

That’s obviously nothing compared to what the Eldrazi are doing nowadays, but they aren’t long for this world and we might be looking at a landscape where Abzan Company is one of the best decks. Company is capable of fast turns, but often they are looking at awkward grips trying to make them work while we’re unloading haste creatures and refilling our hand. Plus, the above scenario didn’t factor in Bloodghast at all. Aside from Burning Inquiry, new Olivia is the best Bloodghast enabler I’ve seen in a while.

Speaking of Burning Inquiry, maybe it has a place in the above list, but I’m more excited to see what Olivia can do in a true value style deck.

Another experiment, this time combining some new cards with the old Griselbrand-Breach deck into more of a midrange amalgamation. Rather than do nothing until the combo (hopefully) works, this list plays a solid board-control/midrange game, buying time with Lingering Souls and digging through the deck with Burning Inquiry/Faithless Looting to eventually Goryo's Vengeance back a Griselbrand for a fair swing for seven and a new hand. What excites me about this list is how it can transform after board to be more all-in or remove combo elements entirely. It will be interesting to see where I am on the “enabler” spectrum, and if I really need all that dig or if I can start trimming some for removal/more discard, which will make this list look a lot better.

This gal is pretty simple to evaluate: a 1/1 for 1W that anthems your Humans when she comes in to play. As if she was anticipating the “win-more” naysayers, she also grows with every Human you play after her. While she’s pretty one-dimensional and might not be good enough to hang with the hyper-synergies present in other linear aggressive decks like Affinity and Eldrazi, for some reason I like this lady. Maybe it’s the art, maybe it’s because she’s Human: there’s just something about this card that quietly whispers “Blue Collar Under-Appreciated American” that I can get behind. So, naturally, we’ll toss her into the most annoying, unfair deck we can find.

[/tippy] gives the deck some much needed consistency and more power to boot. Now that we have enough solid Humans we can cut the Ghor-Clan Rampager/Boros Charm combo that was always a little too awkward and focus on doing what we do best: attacking.

Kytheon, Hero of Akros // Gideon, Battle-Forged was deemed “not good enough” the first time around, but if we’re buffing even 2-3 Humans on average with [tippy title="Thalia's Lieutenant" width="330" height="330"]

[/tippy] then all those one drops start to look a lot better. Plus, with battle cry triggers, Kytheon would let us run headfirst into Tarmogoyf and the like with impunity. As anyone who has played this deck knows, Naya Blitz players love their impunity. Keep an eye on this one. Barring any major spoilers I’ll more than likely be battling with this immediately post-ban.

This is the type of card that almost gets there on rate alone, but can be busted wide open with the right synergies. In Modern, we know from

Tarmogoyf experience it’s relatively easy to activate Delerium, but once we do, what are we looking for? We’re never trading a card for a basic land, so the failstate here is useless, and though searching up creature bullets is fine, I wonder if it’s really worth it? Sure, being able to grab Spellskite against Infect is decent, but is it worth taking up a sideboard slot that could have just been another Spellskite? In matches where we need that bullet creature, it's not like we can cash in the tutor for something "normal." We're almost always just getting that creature, so we might as well play an extra copy of it in our board. In “normal” decks, is playing Traverse really that much better than just an extra copy of whatever you were looking for? What I mean by "normal" is archetypes that might play one toolbox creature (such as that Spellskite), not an archetype that has a multitude of options at its disposal.

By that, I mean Abzan Company. Assuming we can activate delirium (we’ll get to that) being able to immediately search up any combo piece rather than “oops-ing” into it with Collected Company seems insane, and is worth taking a look at. We do have Chord of Calling, but the difference between G and XGGG with a board of creatures is huge. Yes, with Chord you can opponent-end step the spell, but wouldn’t it be so much better to just main-phase your tutor the turn before (or turn of!) rather than having to wait?

Here, it really comes down to whether we can afford to play non-creature spells to afford [tippy title="Traverse the Ulvenwald" width="330" height="330"]

[/tippy]. But that pulls us away from Collected Company. I’m not entirely sure what the answer to this question is, as a Traverse Abzan combo deck would probably look a lot different than a traditional Collected Company list, but it’s worth exploring. It is possible that the answer involves incorporating [tippy title="Traverse the Ulvenwald" width="330" height="330"]

[/tippy] into the Spike Feeder combo deck, as that combo can’t be helped by Collected Company anyways. I'm thinking something along the lines of Matthew Rogers' Pro Tour list, but with some more removal and Traverse added. I'll be tinkering with this and should have a decklist soon after release: let me know if you plan on working on this as well!

The new Check-Lands cycle seems interesting with shocklands and what-not, and is definitely more powerful than the battle-land cycle (for Modern at least). Even so, I’m not sure if they will quite get there.

In three color decks, manabases contain more fetchlands than actual lands, which means even with a land in hand these guys still might fail and come in tapped. In addition, low land counts mean any land past the third isn’t a guarantee, so if we’re expecting to play this in the first three turns than why aren’t we just playing fastlands? I would rate them behind the Scars of Mirrodin fastlands in terms of playability, and those only see minor play in a few archetypes.

We're a little over halfway through the set and we already have a lot to talk about. The four-mana planeswalkers will definitely not make the transition into Modern, but the set contains enough oddities and unique effects that I imagine we’ll see at least one (or more) of them pop up, at least for a while. Currently, we have no breakout Snapcaster Mages, Liliana of the Veils, or Geist of Saint Trafts to discuss, but that doesn’t mean we couldn’t get one in the full spoiler. As you’re reading this, the full spoiler should be out tomorrow, so here’s me crossing my fingers from the past that one of the Big Three gets reprinted. Or, something else flashy gets printed between now and publication that we can talk about next week. Until then, good look brewing and let me know in the comments what you find out! (And how bad my lists are...)

13 thoughts on “Shadows Over Innistrad Set Review and Decklists, Pt. 1”