Hello and welcome back for another High Stakes MTGO report!

While the past few weeks were all about selling, this week was all about buying. With the exception of selling a few playsets of Magic Origins painlands I spent all my time buying Modern positions, and more specifically Zendikar and Worldwake targets. Between fetchlands, creature lands, iconic Modern staples, rares, mythics and bulk specs, the Zendikar block is the Magic Christmasland for speculators.

As discussed previously, the best time to pick up ZEN positions was, depending on your targets, sometime between Friday and Sunday following the introduction of the triple ZEN flashback drafts.

Fetchlands actually saw their lowest price point on Friday morning, and then rebounded on Friday afternoon most likely following a first wave of speculative buys. After that rebound over the weekend all prices lowered again this past week as Worldwake was introduced in the mix, though not reaching the lowest point seen by the first weekend of drafts.

With this in mind my strategy has been to make a first round of purchases on Saturday and Sunday, August 19-20th, and then keep track of the evolution of prices to consolidate my positions as we go. I completed my stock this past week but with prices getting lower for some cards last weekend I'm not excluding adding another playset or two of some cards, including the fetchlands.

ZEN/WWK flashback drafts end this Wednesday and after this week prices should not get any lower. With three Modern GPs underway as I'm writing this, some ZEN/WWK cards might have already significantly rebounded by the time you read these lines. Similarly to previous specs following flashback drafts, my goal is to clinch a 50% profit at minimum so if this happen within a week I'll be happy to sell. But I'm also ready to hold on to these cards for a while if needed.

The snapshot of the portfolio is available here. Let's dig into more details of my pick-ups now. 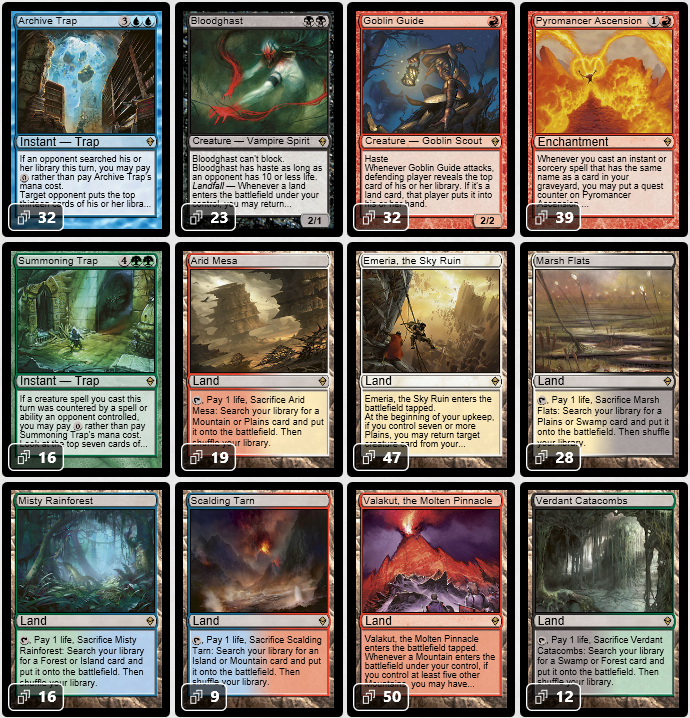 Here is my current selection of Zendikar rares. This panel is quite diverse ranging from penny cards such as Summoning Trap to expensive staples such as Scalding Tarn.

Nothing surprising here and besides the obvious fetchlands I opted for the solid Modern staples that are Goblin Guide, Pyromancer Ascension and Bloodghast, all of them having the potential to double up from my buying prices.

Bloodghast might be the most risky position of all here. Sure this vampire topped 20 tix last May and has been flying between 10 tix and 15 tix since then, but I'm not so certain that the resurgence of Dredge decks in Modern is strong enough to permanently pull up Bloodghast above 10 tix. I guess we'll see.

In the bulk section I opted for Summoning Trap, Archive Trap and Emeria, the Sky Ruin. All of them were able to move up to 1 tix or more--up to 4 tix for Emeria--so buying in around 0.2-0.3 tix seems perfectly appropriate. I wish I was able to grab more copies of Valakut, the Molten Pinnacle closer to 0.5 tix but this is again a solid pick moving forward considering the recent strong finishes of Scapeshift and RG Titan decks.

Zendikar is packed with rares that are staples in Modern, Legacy and/or Vintage. When it comes to ZEN mythics this is not the same story. At best Iona is a one-of in Reanimator or Gifts decks, Mindbreak Trap is a decent sideboard card in some Legacy/Vintage decks and Warren Instigator is at best an average casual goblin. So the only game I'm playing here is the patience game.

With the ZEN flashback drafts all of these three have hit a very long-term low and I'm simply betting that the price can only go higher from here. About once every two years Mindbreak Trap hits 20 tix. Although in Modern Masters 2015, Iona may hit 3 tix some day. And the Instigator could reach 5 tix again--which it has done several time in the past--if Goblins become more viable in Modern (and Warren Instigator has a spot in the 75).

Eldrazi Monument could have completed this trio but the artifact simply fell short of any competitive strategies, even remotely. So even after a dramatic drop from 6.5 tix to 2 tix I would not consider buying here. 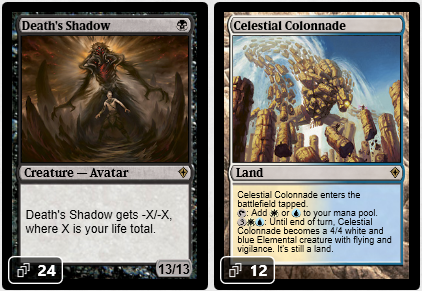 My two first-picks in Worldwake are not a surprise for anyone. Celestial Colonnade made its way to 35 tix three times over the past five months and one week of ZZW drafts won't prevent this creature land from doing it again in a near future. From a buying price of 20 tix the percentage profit may never be a triple-digit one but it's a spec that only requires three playsets to move.

I place Death's Shadow in a similar situation as Bloodghast. Strong of recent tournament success, this creature that was a bulk rare two years ago spiked to an incredible 15 tix last month. That's why even at a discounted 9 tix this spec looks more like a gamble than a strong investment. I would be prompt to sell if this avatar cross the 15 tix bar again. 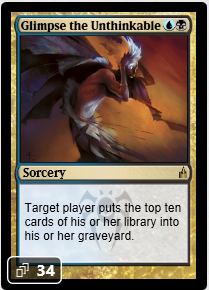 In the long series of "why not buy a Modern card when it reaches a long-term low," I picked up Glimpse the Unthinkable last week. The last time this mill card was under 4 tix for more than a month was in April 2013. With multiple incursions above 8 tix in the past three years and with Ravnica flashback drafts out of the way, I hope the next price movement for this card is toward 8 tix again. 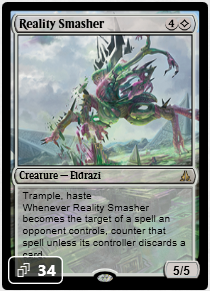 Standard cards playable in all formats are very rare. Although this one is not very popular in Standard right now the potential for more than 3 tix is obvious. Nicholas Cancellara mentioned it twice in his Buy, Sell or Hold articles including when this Eldrazi was around 2.5 tix. Thanks to Nicholas's reminder last week I thought I would grab some copies of Reality Smasher too.

Without hundreds of copies of painlands to sell, I would not have sold anything this past week. Llanowar Wastes and Yavimaya Coast were on the menu, with a 31% loss and a 16% gain respectively. I'm getting closer to breaking even with the Wastes, which should be the next wave of sales.

The pseudo good news was for Battlefield Forge which rebounded to 0.6 tix this past week after hitting a terrible 0.2 tix two weeks ago. This is not going to turn my stock of Forges into a profitable spec but it will surely limit the loss, even though I still have yet to start selling.

With a lot purchases in the past few weeks Modern is definitely back in business in my portfolio. The trick with Modern specs is always to keep them in the back of your mind as they can cycle up faster that anticipated.

It often only takes one good result to propel a card to new heights and there are too many viable decks in Modern for a spike to sustain for a long period of time. Selling after a 50% gain or after a position reaches its previous record high is my mantra when it comes to Modern specs.

Rise of the Eldrazi is up next! The third set of the Zendikar block also has a couple of interesting Modern targets to keep an eye on. Linvala, Keeper of Silence, Vengevine, Eldrazi Temple, Inquisition of Kozilek and Kor Spiritdancer are among the cards I'm lurking on right now.

Vengevine and the Spiritdancer are particularly out of favor these days so I would expect prices to drop significantly for them, and that's just what we want as speculators--extremely low prices for great cards nobody is interested in.